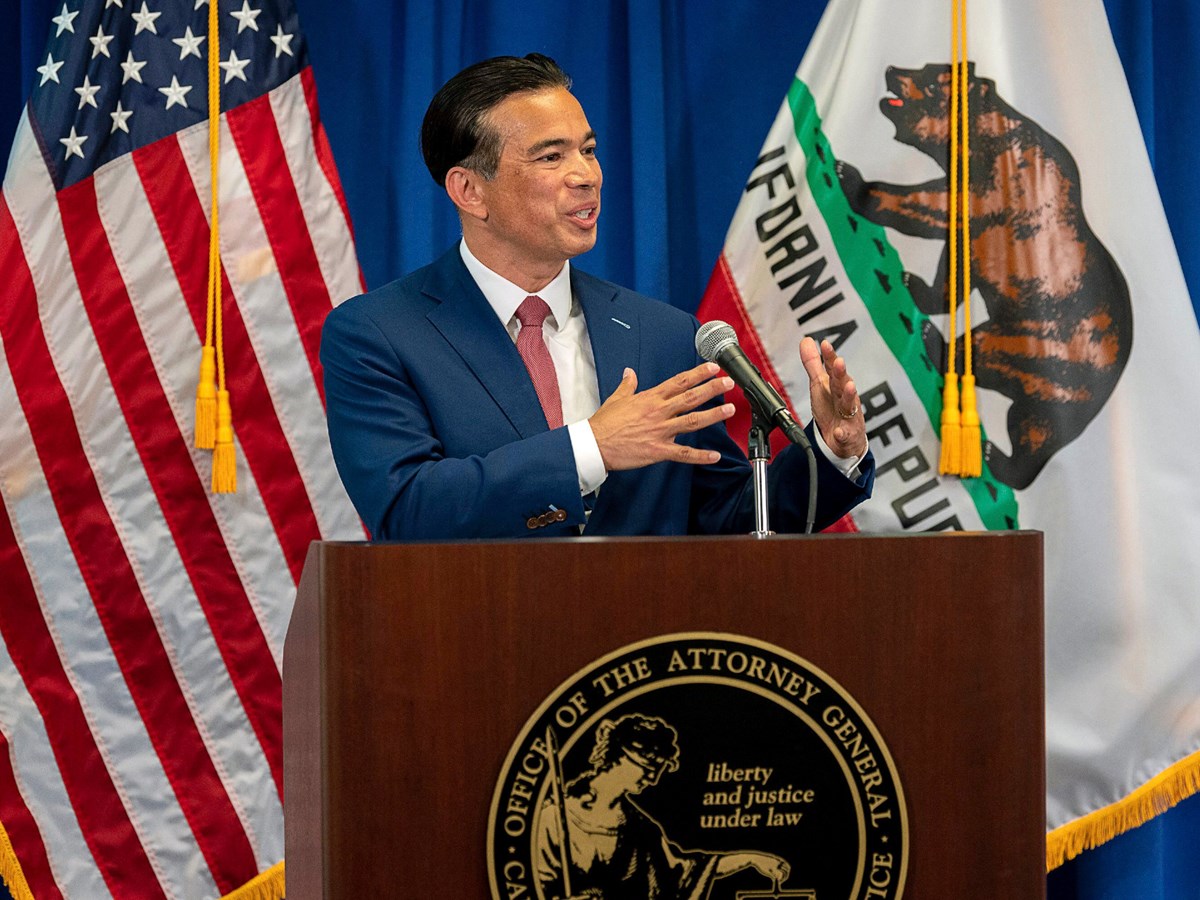 Attorney General Rob Bonta speaks after he was sworn in as California's 34th Attorney General, Friday, April 23, 2021 in Sacramento, Calif. Bonta, 49, is the first Filipino American to head the California Department of Justice.

Rob Bonta is making history as California’s first Filipino American Attorney General. While Bonta has been on the job for a little over two weeks, he’s made it clear that he wants the role of the state prosecutor to evolve, especially when it comes to criminal justice reform and hate crimes.

“I’m going to fight for our disadvantaged communities, our vulnerable communities, those who have been hurt and harmed and abused and mistreated,” Bonta said on CapRadio's Insight. “And [I’ll] make sure that justice is done, that I will balance the scales, that I’ll step in and support, defend and protect them.”

Bonta was appointed to the position by Gov. Gavin Newsom after former Attorney General Xavier Bacerra’s confirmation as the U.S. Secretary of Health and Human Services by the Biden administration. The position is up for reelection next year.

During his time in the state Assembly, Bonta championed bills requiring the attorney general to investigate police shootings of unarmed civilians and police departments to disclose personnel records and internal investigations.

“And I’m totally committed to [defending and protecting vulnerable communities]. People can call it whatever they want. Some will call it progressive — others will call it fairness,” Bonta said. “People have different words for it, but I’m going to be a warrior for everyday people in California … their fights will be my fights, and I’m going to take care of them.”

CapRadio’s Insight host Vicki Gonzalez recently spoke with Bonta about what he’s accomplished, what he hopes to get done and what to expect during the 2022 attorney’s general race.

On if Bonta considers himself progressive

I don’t worry about labels. I try to follow my values, and my values have always been to create more opportunity, more equity, more justice and more inclusion for as many Californians as possible.

That’s what I sought out to do and attempted to do in my almost nine years in the state legislature. That’s what I’m going to continue to do as the people’s attorney and the attorney general’s office.

On how he plans to address police shootings of unarmed people

I am the co-author of AB 1506 along with my colleague Assemblymember Kevin McCarthy. We worked on that bill for several years … and we got the bill passed and signed last year. It is now the responsibility and the obligation of the California Attorney General to conduct thorough outside investigations of officer-involved shootings that result in the death of an unarmed Californian.

We’re going to expect that to be about 40 [reports stemming from AB 1506] based on historical data, and we’re going to have a top-notch team that gets it done right.

On Bonta’s willingness to work 'across the aisle'

I’m going to bring my collaborative spirit to all that I do. I think we will get more done when we work together when we listen to each other. Sometimes we see things when other folks point them out, because from their lived experience or their perspective or their priorities, or where they are on the ideological spectrum. They see it, but I don’t and I’m open to that … I don’t know everything. I know what I don’t know. I know that I must continue to learn and be open-minded and work with all stakeholders to get the salutations that are the best solutions. So I’m going to bring my heart, my values to the table, and I’m going to be at that table with others — including law enforcement — to listen, to identify the best pathways … for California.

On his top priority as Attorney General

I’d say my top priority is to protect everyday people from abuse and mistreatment, and that takes so many forms, unfortunately, in the state of California. There are certainly those in the criminal justice system who are treated unfairly and deserve more humanity, more compassion, and a second chance. There are those that are forced to live at the intersection of poverty and pollution, who are forced to breathe dirty air or drink unclean water, who deserve support and protection …

I will say that the two top priorities for me are, one, addressing the full-on state of emergency and state of crisis that we are in in California, and throughout this nation, with respect to anti-AAPI violence, APPI hate crimes … To the API community, I say, I see you, I value you, I am you, and I will fight for you.

Going back to hate crimes, the Attorney General’s office has a wide range of areas in which it can assist with addressing hate crimes. We’re going to be rolling out some of those actions in the next few days. I’m excited to say it’ll include working with community leaders … [and] working with law enforcement to help better identify and investigate hate crimes.

… We know hate crimes are so underreported, [so] it will involve having a better reporting and tracking system that’ll address API bullying in our schools. That will involve taking on organizations that are white supremacist organizations and that are organized around the their commitment to hate. So there's a wide range of tools and we will use them.

The [state] Department of Justice does not look like California, and we need to be intentional and deliberate in the steps that we take to help change that. So, I wanted to put that stake in the ground and show that commitment that’s been a part of who I am, part of my values for years. No one should have been surprised to see that, but it was really important for me to make that publicly known and to make that commitment to a DOJ that looks like California.

I think who I’ve been is who you should expect to see in the seat. I’ve been someone who hasn’t shied away from a tough issue when I think justice requires change, and I’ve been committed to that.

I’ve worked collaboratively with others in that mission. I’ve tried to make my case and have been successful in large part, convincing others that it’s the right thing to do. Sometimes change is hard, but we always need to be identifying ways we can be better … we can be fairer. More just, create more opportunity, equity, and inclusion.

I think you’ll see from the actions that we’ve taken early and actions that we’ll continue to take, that there is an ongoing commitment to the smart, and thoughtful and just reform that is required, and that the Attorney Generals' office is responsible for.