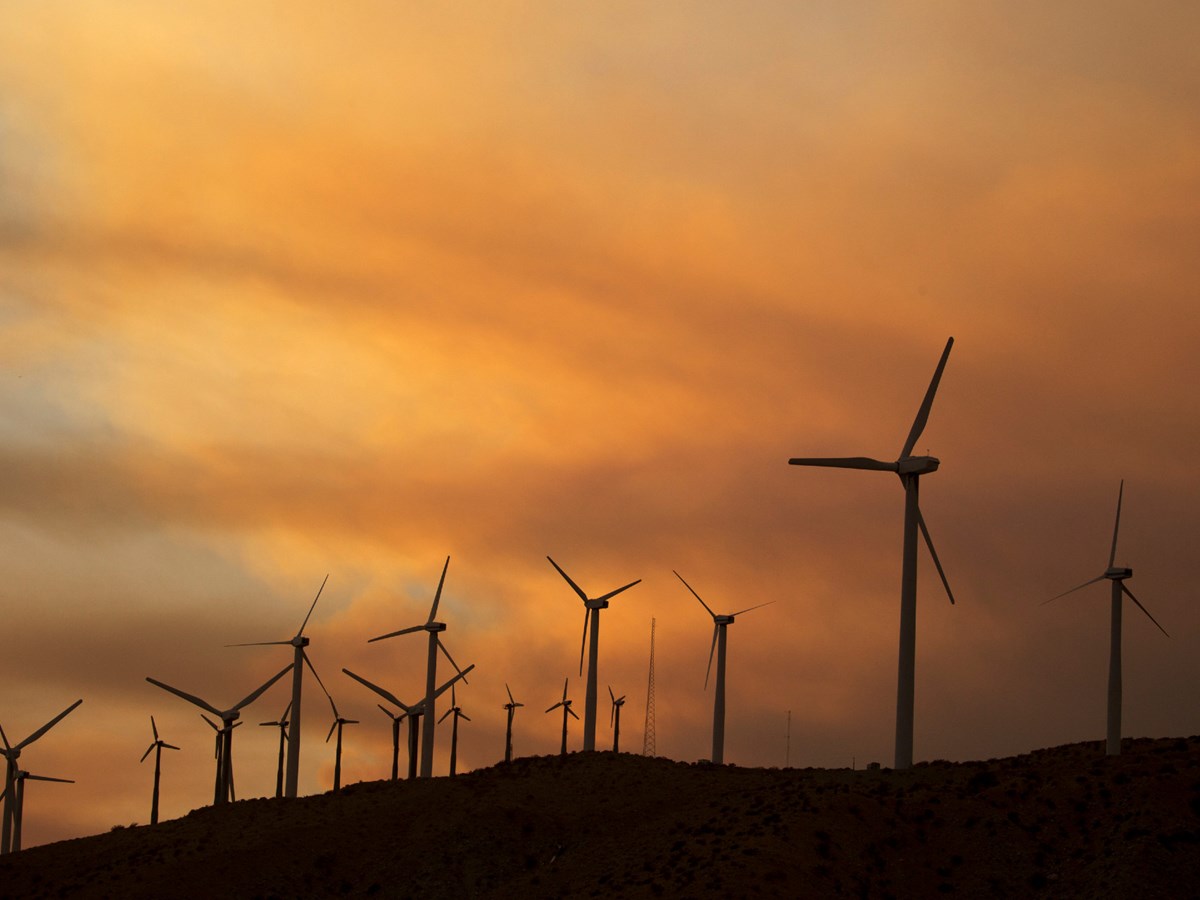 Smoke rise behind windmills from the Apple Fire during the sunset near Whitewater, Calif., Sunday, Aug. 2, 2020.

The Biden administration is pushing to dramatically expand the utilization of offshore wind as a source of green energy.

A March executive order proclaims the “offshore wind industry will drive new jobs and economic opportunity up and down the Atlantic Coast, in the Gulf of Mexico, and in Pacific waters.”

Despite that, California might miss out on the early opportunities from this initiative. One reason is that the state’s steep ocean shelf makes anchoring turbines to the floor impractical, says Nancy Kirshner-Rodriguez, the western director of the Business Network for Offshore Wind.

“For the West Coast, for California, all of our wind farms will have to be floating offshore wind," she said.

CapRadio’s Ed Fletcher caught up with Kirshner-Rodriguez to understand how this push plays out in California.

What is the Biden administration saying about offshore wind? What do we see coming towards the United States on this front?

Offshore wind has been developing for around 30 years, initially in Europe. For the last 15 years or even more, the United States has been really looking at offshore wind as a viable renewable energy to service a lot of communities and homes. However, it's not a turnkey product.

Early efforts in New England faced opposition over their visual impact potential impact on the ocean life. We saw the first gigawatts really being built off of Rhode Island. Just this past year, the state of Virginia working with Dominion Energy put in a demonstration project that is then going to grow to a full-scale utility project.

At the same time, there have been many auctions by the Bureau of Ocean Energy Management on the East Coast, and there are up to 16 plans right now at some point of progression within the government, waiting for some level of action approval, next steps that would bring us to about 11 gigawatts. The states on the East Coast have already identified that they want to procure up to 29 gigawatts. The Biden administration this week said they were going to work to get up to 30 gigawatts moving forward and actually under development and then in operation by 2030, which is very ambitious, very ambitious, but very doable.

So to kind of summarize that, the Biden administration is looking to take it from what is now a tiny, tiny sliver of our energy equation into being a much more significant portion in a very short period of time.

Yes, they are, they are, but the industry has matured to the point now where it is accomplishable, and I think we owe those of us that are working in the offshore wind space are we owe the state governments that have shown incredible leadership on the East Coast for looking at how to integrate offshore wind as a significant renewable energy product into their future plans.

How does this push affect California? Will California see a large-scale wind generation off our coasts as a result of this?

I believe it will. Because the commitments and the approach that the Biden administration is taking is to figure out how to work cooperatively with the many different interests to move the industry forward. The reason California is on a different timeline as the East Coast is steep continental shelf will require a new approach to anchoring turbines.

So while most on the East Coast will be fixed to the ocean floor, on the West Coast all of our wind farms will have to be floating offshore wind. Just a few years ago, there were as many as 55 different foundations for offshore wind floating foundations being explored around the world. There likely will be four or five types that make it to market.

Each turbine will be the size of the Eiffel Tower. I think it's important to talk about how big these turbines and the full set will be.

And then you'll have like one hundred, but they'll be 20 to 30 miles and possibly further out in federal waters ultimately. So as far as California looks to, and other West Coast states look to pursue offshore wind, we are like at the beginning of the floating industry.

Correction: In a previous version of this story Nancy Kirshner-Rodriguez was misspelled. It has been corrected.