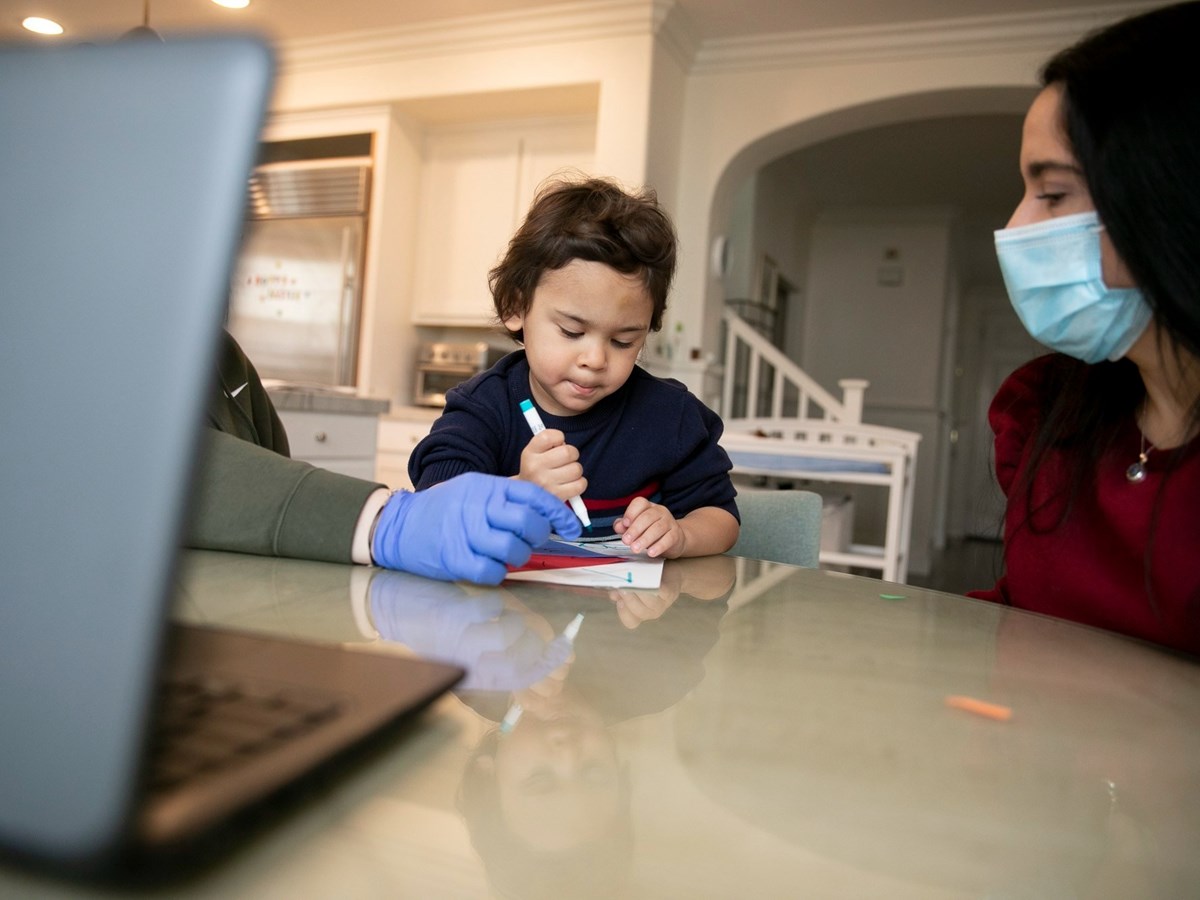 Jonathan, 4, works on an art project with help from his therapist, left, and mother, Natalia Acosta, right, during online preschool at his him in Tracy on March 3, 2021.

One year after schools shuttered, the fears of many parents of California’s special-needs students have been realized.

Many of those students — whose disabilities can range from autism to deafness, and most of whom have gone more than a year without in-person services such as speech therapy — appear to have regressed physically and academically.

“No one is publicly saying, ‘Hey guys, all hands on deck, we need to rally around these kids, we can’t let them fail,’” said Lisa Mosko, director of advocacy for special education and education for Speak Up, a Los Angeles-based parent advocacy group.

“No one is publicly sticking their neck out for these kids.”

Some parents have paid for private services. Others said their special-needs children have thrived in an online environment. Most, however, described to CalMatters an overwhelming year of crisis. The critical in-person services their children need remain elusive, even as COVID-19 case rates dramatically decline and more schools move to reopen.

When the pandemic hit, experts warned that many services and activities critical for the development of special-needs students would simply not work well online. Those with learning or physical disabilities benefit most when they are socializing with classmates and teachers in person, they said.

Now, advocates and parents say drastic efforts are necessary to curb the lost learning and development. They’re calling for widespread screening and assessments of struggling students with disabilities that might have gone undiagnosed this year. And they want an immediate return to school, in person.

California’s decentralized approach to school reopenings this year has meant widely uneven opportunities for in-person services for special-needs students. As early as last summer, some public schools began offering in-person instruction or support to students with Individualized Education Plans — a plan every special education student has that outlines goals and includes special services they require as a guidepost for everyone who works with them.

Though the state’s reopening rules and a recent legislative deal prioritize in-person learning for special-needs students, many of the state’s large, urban school systems such as West Contra Costa and Los Angeles remain in distance learning.

Three-quarters of 300 Los Angeles Unified parents said their kids had regressed or lost skills, according to a Speak Up survey last fall. Though California’s largest school district has intermittently allowed in-person services for special-needs students, only about 1% of the district’s students benefited from it as it was based on educators and families volunteering to come back.

Those findings echo the concerns experts had when the pandemic started. Many students with disabilities require specialized care that one can’t reasonably be expected from parents, Connie Kasari, a human development professor at UCLA’s Graduate School of Education and Information Studies, told CalMatters last March.

“It’s one thing to put a child who can understand in front of a computer screen to do their lesson, do their homework, and quite another thing when the child doesn’t understand that,” Kasari said. “What is that child going to do? It could be that they’re just not getting any kind of education at all.”

Last March, CalMatters spoke to four families of students with special needs to see how the pandemic had affected them just a few weeks in. From the youngest to the oldest, here’s how they’re faring a year later.

The first months of the pandemic were hardest for Natalia Acosta, her husband and two young children, who live in Tracy.

Four year-old Jonathan, who’s autistic, stopped attending private insurance-funded therapy last spring when his father’s salary was cut by 75%. He went without speech or behavior therapies for three months before getting some services back through Regional Center, a state-funded non-profit that provides help for kids with special needs. In the fall, when Jonathan’s father lost his job, he applied for Medi-Cal to help pay for the toddler’s necessary services. But money was tight. Stress and anxiety felt constant, Acosta said, to the point she began feeling ill.

Jonathan was already receiving about 30 hours of therapy a week — with therapists coming to their home — when virtual pre-school began. A therapist is now on hand during Zoom school to help him adjust and engage. 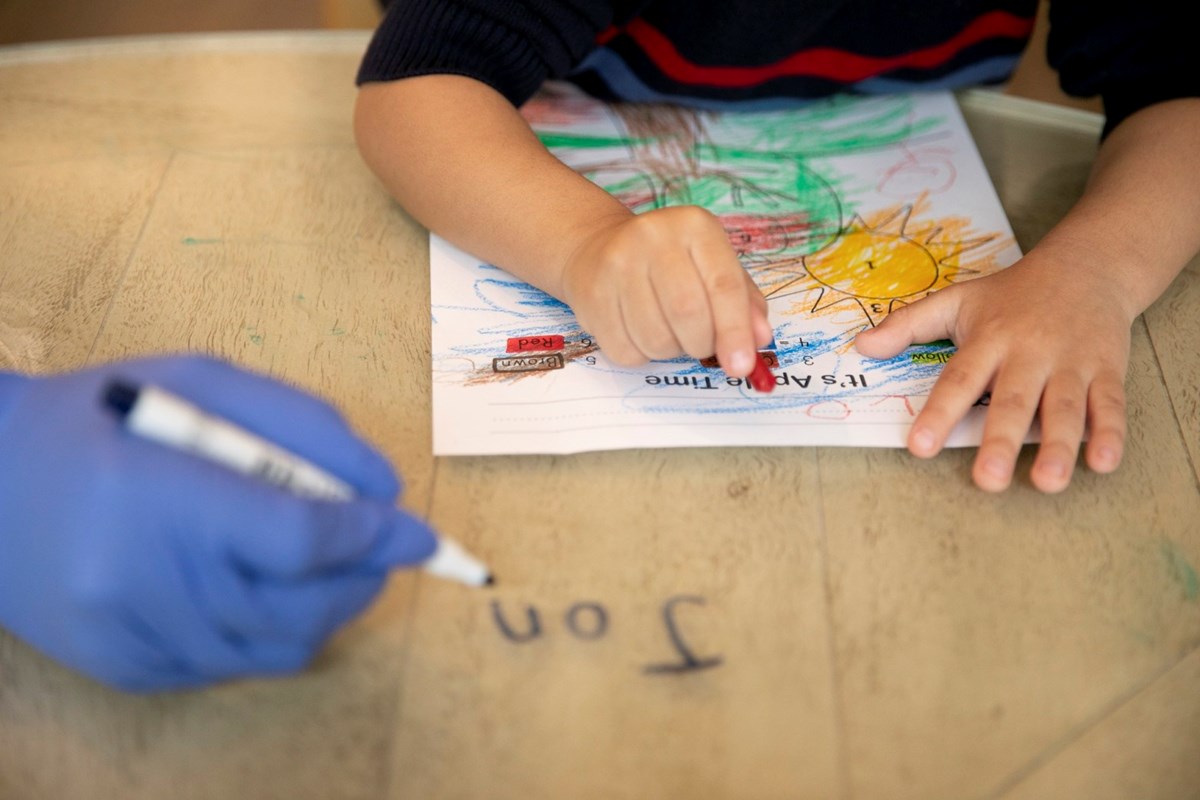 Jonathan, 4, works on a coloring activity during online preschool at his home in Tracy on March 3, 2021. Jonathan, who is on the autism spectrum, is aided by a one-on-one therapist three days a week who helps with online learning and behavioral issueAnne Wernikoff / CalMatters

In early 2021 Acosta’s husband got a new job and that helped stabilize the family’s finances. That’s when Acosta said things started to look up for the family.

Last month, the Tracy family decided to send Jonathan back to the school for in-person speech therapy with a small class because he had begun acting out at home, having tantrums, yelling and throwing things. Acosta, who worried about exposure to others, said she knew this was because he needed to go to a class, to see people.  So they decided to take the risk and send him.

After attending sessions on campus, Acosta began to notice something. Her son was happier. He smiled more often and talked a lot.

“It opened my eyes to realize that was what he needed,” she said. “It was time to do it.”

Claire Lazaro, a Modesto mom to two special-needs children, worried how distance learning would fare for 12 year-old Hannah, who is autistic. Her daughter used an assisted communication device at school and received one-on-one speech therapy three times a week before her campus closed.

After nearly half a year of uncertainty and guesswork, things got better in the fall. Hannah’s school began providing more structured schedules and new material for kids to cover. Hannah began receiving virtual speech therapy, as well as behavioral therapy and attends a virtual inclusion session to work on social skills. Her aide is present in the virtual classrooms to help.

“The kids like the system now, being virtual,” Lazaro said. “They are thriving on it.”

Now, Lazaro worries about what the transition to in-person school will be like for Hannah and her 13 year-old, Gabriel, who is also autistic. Autistic individuals tend to crave routine and they got into the swing of virtual learning at home once they had structured schedules,, Lazaro said.

Once on campus again, Lazaro said, they have “all the stimulus that they haven’t been having like different kids going all around them, the different things in a classroom, and that will be hard too.”

But she doesn’t plan to send them back in person until they too can be vaccinated.

In Modesto, Lucia Soares worries her son Daniel, 17, has lost a critical year of high school. Daniel is on the autism spectrum and was attending general education classes with the help of a one-on-one aide prior to the pandemic.

Soares said she worries about all the things he’s missed even though he passed all his classes.

“He quickly learned how to work on his own, which was great for us to see, but there’s also challenges,” she said. “He’s approaching his senior year and for me this is precious time we lost and are not going to get back.”

Daniel’s parents hoped to take advantage of these high school years to see their son at his most independent and comfortable in a familiar setting and to be able to observe his potential trajectory out of school or for independent living in the future.

“He needed to learn so many things to become an adult like any other student,” Soares said. “We could have used every year possible. Daniel’s education support will end when he graduates high school.” 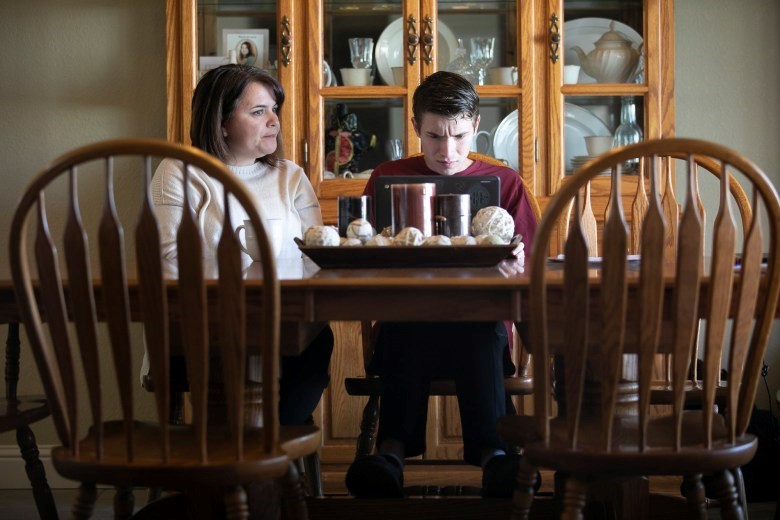 Lucia Soares, left, helps her son, Daniel, 16, with his history homework at their dining room table on March 27, 2020.Anne Wernikoff / CalMatters
Follow us for more stories like this