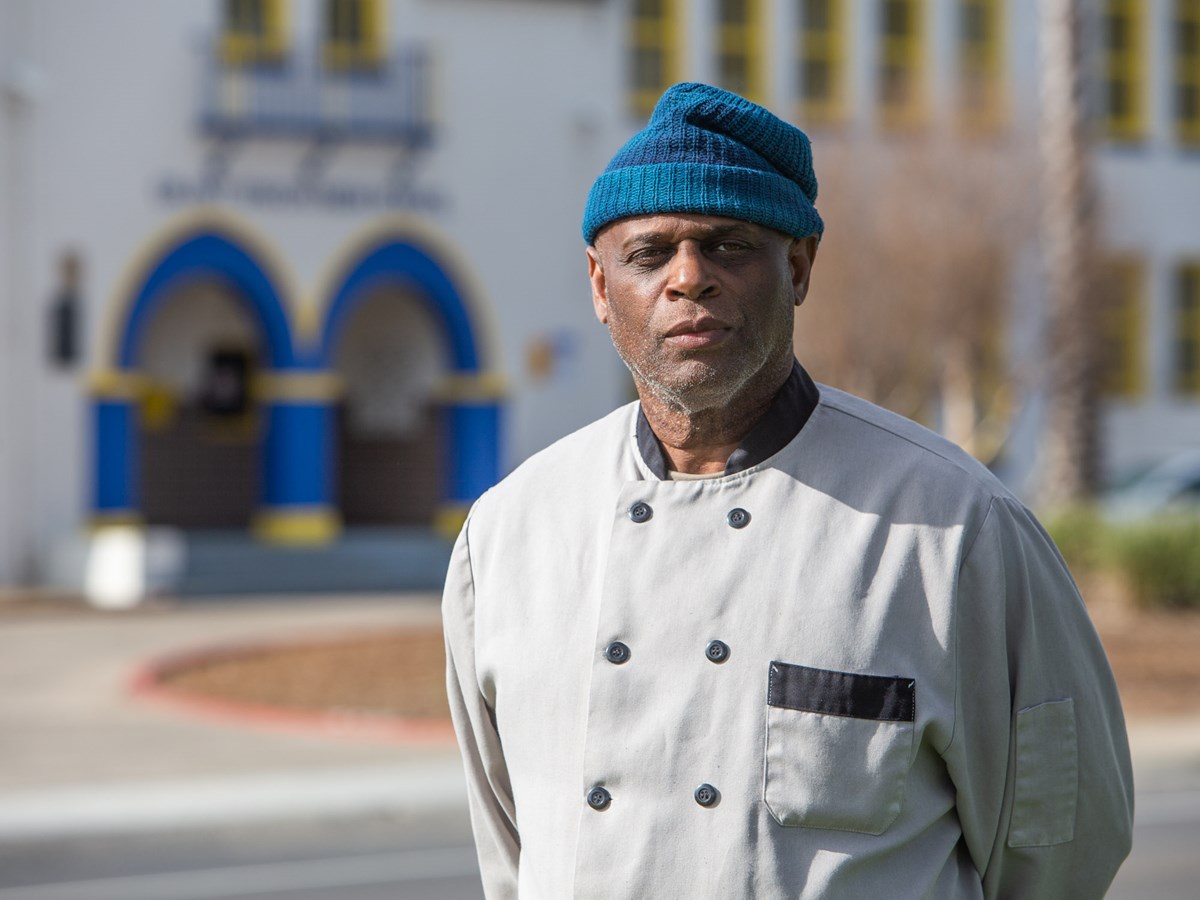 Lambert Davis, in front of Grant Union High School from where he graduated in 1976.

If you’ve ever listened in to a Sacramento City Council meeting, you’ve likely heard Lambert Davis Jr., owner of To The Bay And Back Cheesecakes.

Davis is a regular at City Council, and he’s been showing up in-person and virtually for public comment the past two years, weighing-in on everything from “strong mayor” to the city’s stand against racism. And desserts.

“Mr. Schenirer, it took a lot of courage to do what you did regarding Black Lives Matter and I want to commend you for that,” Davis offered to Councilman Jay Schenirer on March 2 — then added his spiel: “I hope that you will vote with two-thirds majority to fund our cheesecakes.”

It’s a business pitch, and it’s a comment on the state of the city’s approach to equity and racial justice. In two minutes, Davis can hit it all — and also urge City Council members to support his burgeoning dessert company, To the Bay and Back Cheesecakes.

In some ways, the pandemic has made council meetings easier for people to make public comments, because everything can be done from the comfort of a couch.

“I would say I probably not only call in every time they have one, but before the pandemic I used to go in every time,” Davis said.

He first applied for a Rapid Acceleration Innovation and Leadership in Sacramento business grant in 2016, but didn’t receive it. Since, he’s also put in an application to be funded by the city’s Measure U sales tax, some of which goes toward underserved communities, and he’s also applied for a small business pandemic grant. He said he hasn’t gotten any money yet, and that’s what keeps him calling in.

“I really had no interest in City Hall other than paying our city bill, our city business license,” Davis said. “But see, they did some outreach. ...They kept saying, ‘Well, we can't find qualified Black businesses.’ Well, here To The Bay And Back Cheesecakes comes.”

[Editor’s Note: Since publication of this story, a city of Sacramento spokesperson said Lambert Davis received $9,000 in grants and technical assistance via the California Black Chamber of Commerce, a grant made possible with the city's federal stimulus dollars.]

Davis will often also weave in commentary on city agenda items with his advertising pitch. But he always ends his comments with a nod to his hometown neighborhood, Del Paso Heights, and a reminder that the city should fund his treats.

Davis said he got the idea to launch a cheesecake business in honor of his mother; the cheesecake recipe he uses is hers. And the name is a reference to family trips.

“To The Bay And Back Cheesecakes, it means in our family, we used to go to Bodega Bay and take our families crabbing,” Davis said. “We would go and we would say, ‘Hey, where are we going? To the bay and back.’” 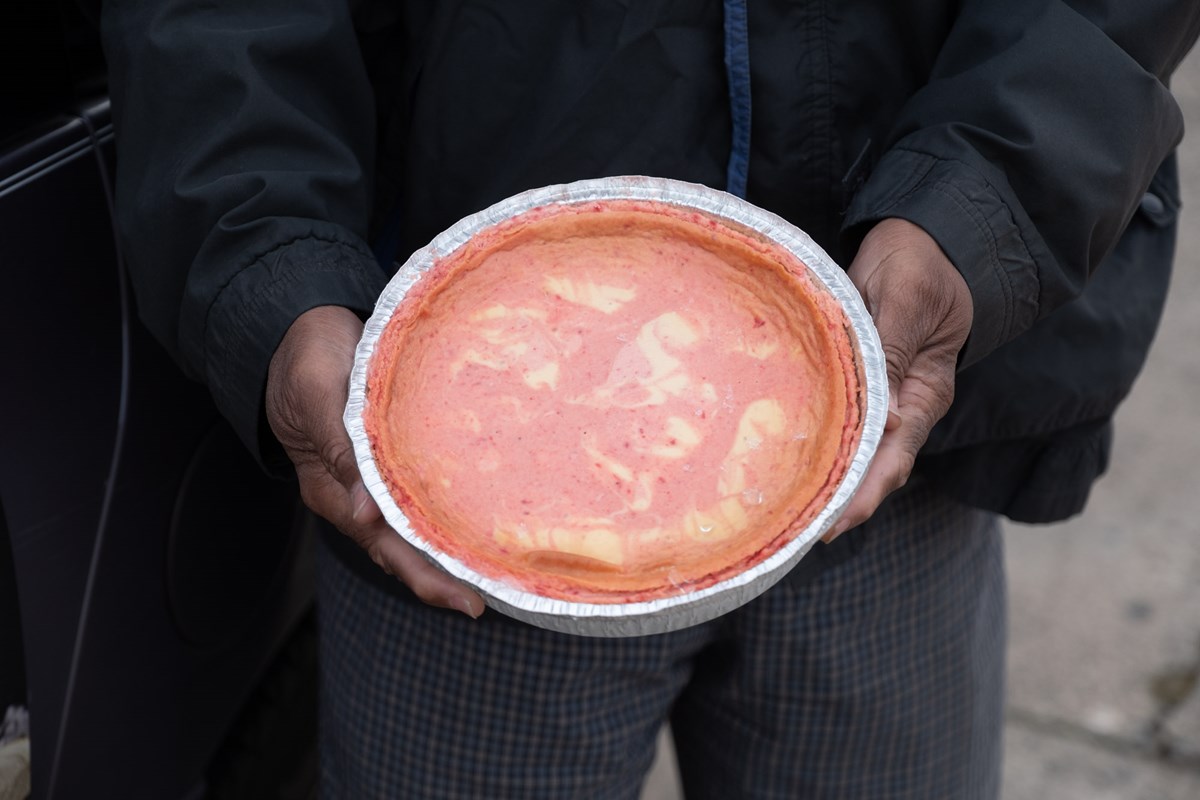 Lambert Davis shows off a strawberry cheesecake that he made.Andrew Nixon / CapRadio

While Davis may have an odd strategy of advertising, his cheesecakes have become known in the highest echelons of the city. He claims to have sent them to almost every council member, such as Angelique Ashby, who said she’s tried his cheesecakes many times and knows him well.

“Lambert is famous for reaching out to the councilmembers and bringing them cheesecake,” Ashby said. “For a long time, Councilmember Warren would bring those cheesecakes to City Hall and have us each try.”

Of course, Davis is not the first to be a regular, notable public commenter. Ashby says that, in her 10 years on the dais, there have been many memorable residents, each with their own specific agendas.

But Ashby says Davis stands out because of his passion for representing North Sacramento, and because his comments always go back to dessert.

“He’s very good at remembering his focus, which is to remind us about cheesecake and To The Bay And Back Cheesecakes, but he’s also an engaged citizen who cares deeply about Sacramento,” she said. “Very few commenters talk about their childhood and their families and their community with the kind of love that Lambert shows for Del Paso Heights.”

“He would call in just about every City Council meeting, and when we were meeting in person, he would show up,” Warren said. “He is persistent. He is the personification of persistence.”

Though it may seem like an unusual advertising strategy, Warren said Davis is also an example of the struggles that many Black entrepreneurs face.

“He's using any means that he has and he has limited resources. And so that's one of the ways he gets, you know, a larger platform to explain to people that he's here,” Warren said.

According to the California Black Chamber of Commerce, 95% of Black-owned businesses in California are sole proprietorships. Sam Kinsey, outreach coordinator for the chamber, said Davis is not unique in that way.

“He's by himself,” Kinsey said. “And so the small businesses need assistance, they need help. He is the poster child for that.”

Davis himself has received about $9,000 from the California Black Chamber that he’s used to create a website and rent an industrial kitchen to work in. However, Kinsey adds that many Black-owned businesses lack the financial capital to expand, which keeps them from building things like generational wealth that other white-owned businesses may have.

A recent report from the federal reserve also showed that Black business owners were twice as likely to be turned down for bank loans than white business owners.

“I think that's the problem that Black-owned businesses face, is we have great products, we have great things to produce for the world, but our foot's not in the door because of political reasons,” Kinsey said.

For instance, Davis doesn’t own a smartphone, and is making and delivering all his cheesecakes personally to keep costs low.

But he says he’ll keep calling into council meetings for as long as it takes until the city will agree to fund his business - even if it can take hours for him to get a chance to speak. In some ways, he says he enjoys being able to keep up with his local government. For one, he feels he’s gotten to know a lot of the leaders of the city; his favorite is Mayor Darrell Steinberg, who he claims is a big cheesecake fan.

“When you call in, you don't have to sit there for hours. Just eat dinner or call somebody, make a cheesecake,” Davis said. “But by the time it's my time to speak, they pretty much know me by now.”

He dreams of one day having his cheesecakes mass manufactured, and even shipping one to Vice President Kamala Harris.

Clarification: This story was updated to note Lambert Davis Jr. has received about $9,000 from the California Black Chamber, a grant that came from the federal CARES Act.