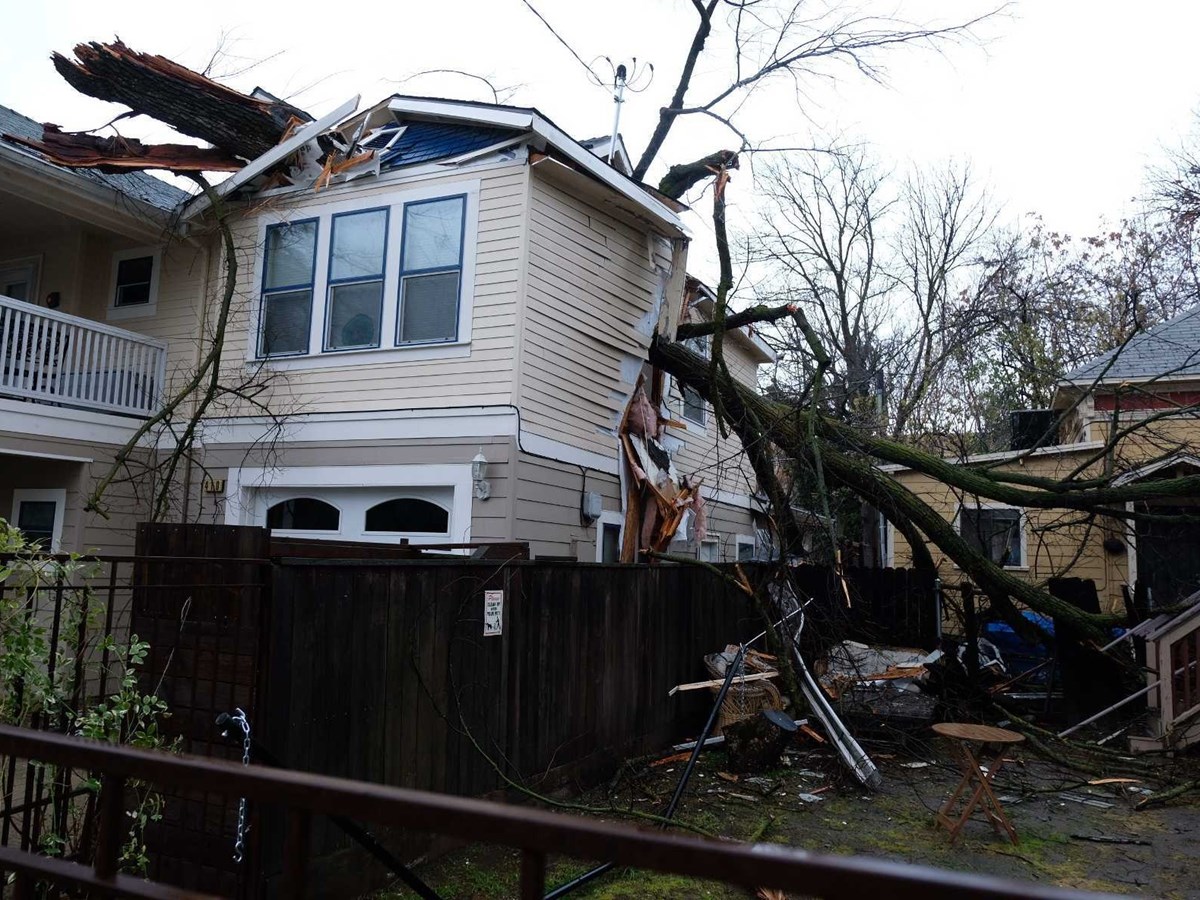 A tree has fallen into a house in the Alkali Flats neighborhood of Sacramento after a powerful winter storm Jan. 27, 2021.

At least two unhoused people in Sacramento died overnight after a massive winter storm barreled across Northern California and left hundreds of thousands of households without power.

The Sacramento City Council voted to declare a local emergency and open at least one warming center at the Library Galleria at 9th and I streets Wednesday night.

The warming center opens tonight at Tsakopoulos Library Galleria (828 I St.) and will operate from 8 p.m. Wednesday, Jan. 27 to 8 a.m. Tuesday, Jan. 28. Attendees can access the center through the Galleria patio entrance on 9th Street between I and J streets. pic.twitter.com/zNdtTMZ5w8

Edward O’Neill, 70, has experienced homelessness for a decade and says the storm was the worst he’s lived through.

“The electrical wires up here we're shorting out last night, it was not a pleasant thing to see happening around here,” he said of an encampment off North B Street near Richards Boulevard. “It’s just survival at this point."

O’Neill says the strong wind caught him off guard.

“I’ve got a lot of stuff inside my tent and [the wind] actually lifted my tent up with me in it,” he said. “There was no way to prepare for it, we hunkered down as best we could.” 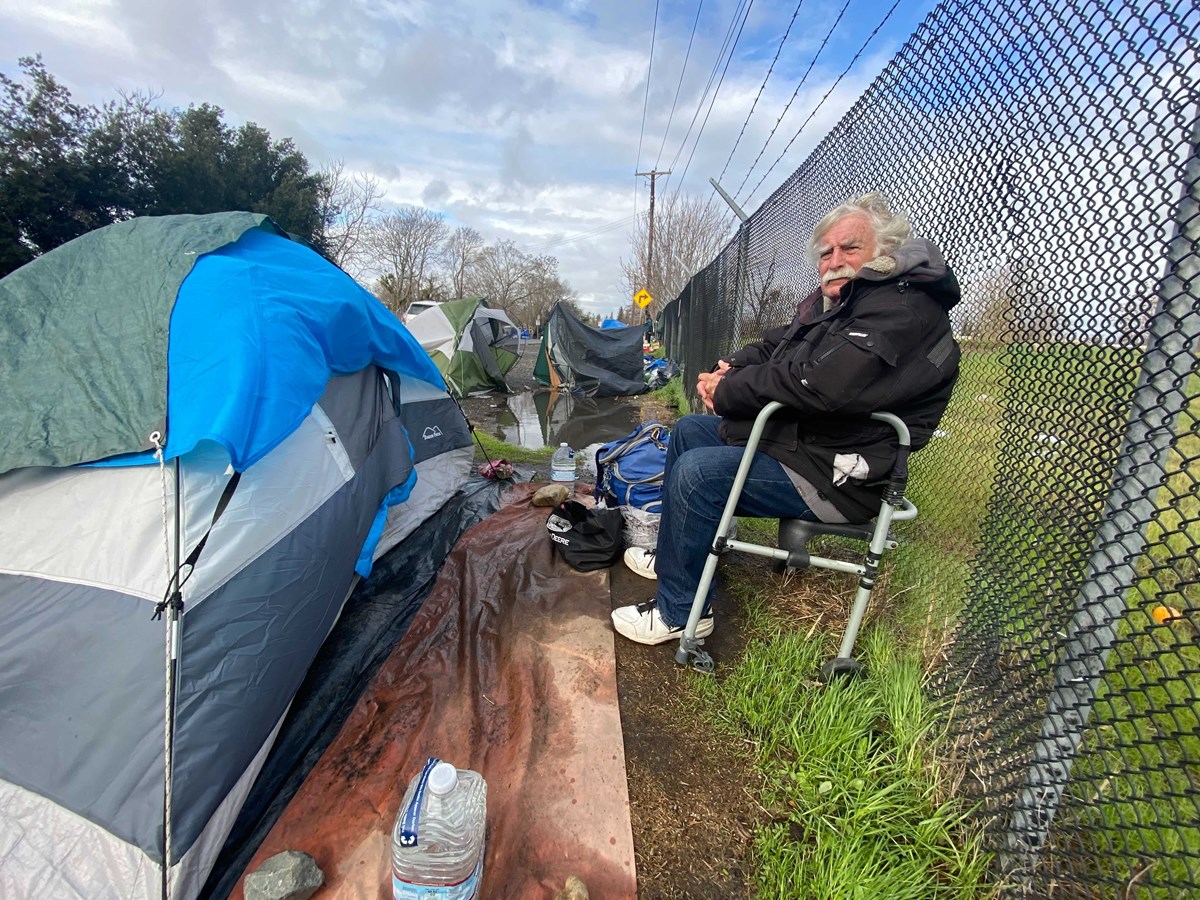 Edward O’Neill, 70, unhoused for 10 years, said the Jan. 26, 2021 winter storm winds picked his tent up while he was in it. This was the worst storm he has ever experienced.Ezra David Romero / CapRadio

The storm also damaged trees, powerlines and homes throughout Sacramento. In Midtown, Eric Rose remembers hearing a loud crash around 11:30 p.m., and looking at his back door to see a tree had crashed through his neighbor's house.

"The top half of this giant tree is broken and fallen through this house, and cut through it like a knife through butter," he said. "Nobody was hurt, but just a lot of damage." 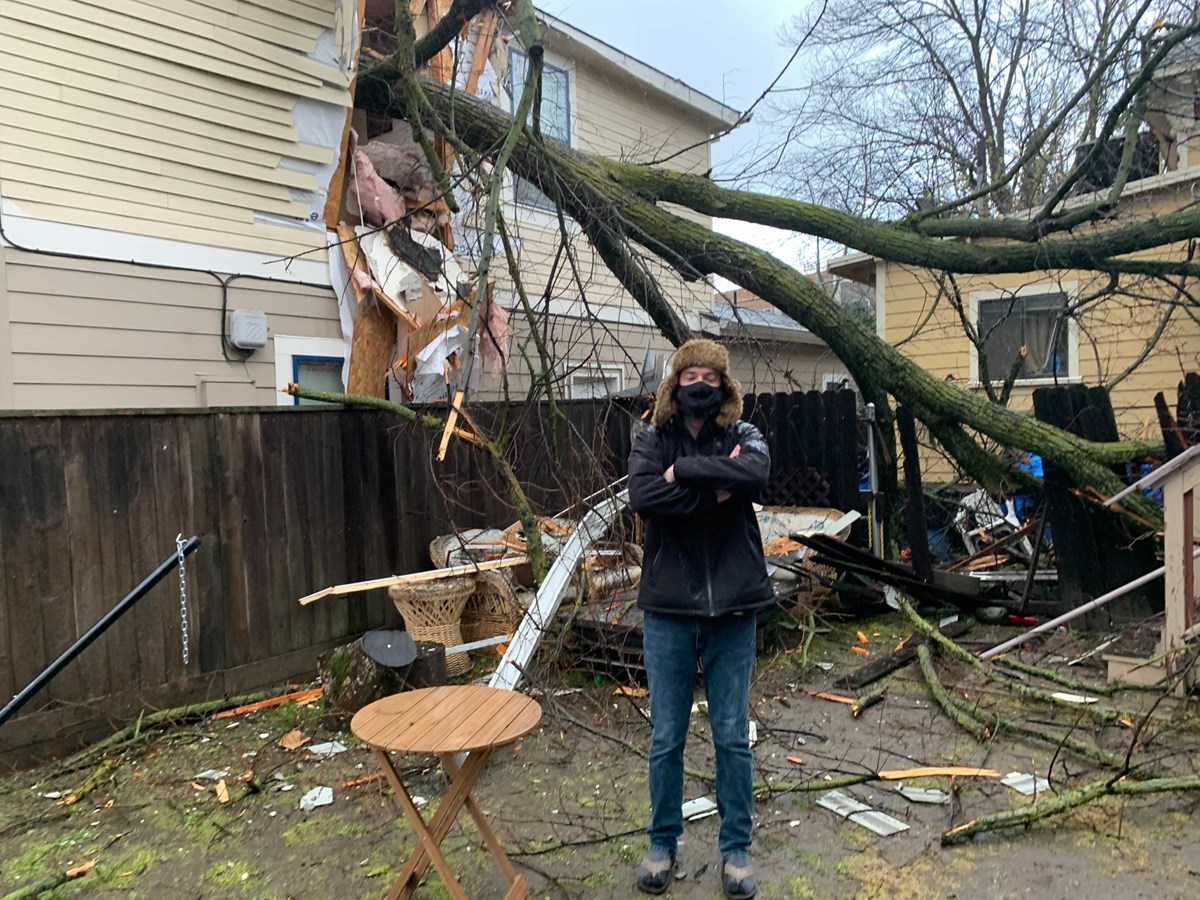 In the Alkali Flat neighborhood on the corner of D and 13th street, a tree fell over and broke a house. Eric Rose heard a crash at 11:30 p.m. Jan. 26, 2021, and realized it was his neighbor's house that was hit by a tree that fell due to the storm.Ezra David Romero / CapRadio

"Some tents we're not savable, some blew away," Velazquez said. "So we're, you know, in shambles right now, trying to figure out what we could do to save our business."

Velazquez said he wants California Gov. Gavin Newsom to allow the region to move to the next tier in the state's COVID-19 reopening system. Sacramento County's case rate is currently six times the level needed to move from the most-restrictive purple tier. 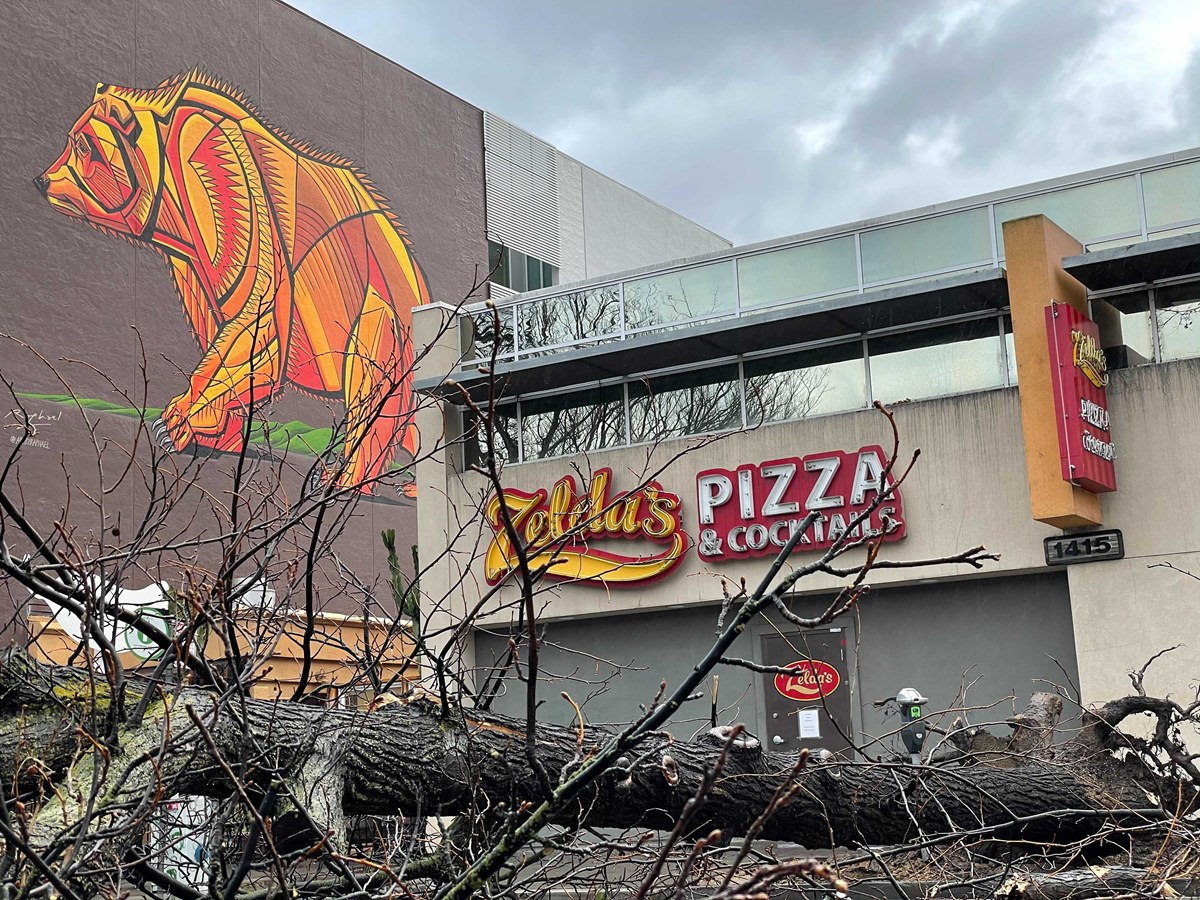 A tree sits in front of Zelda's Pizza in Sacramento after a winter storm downed trees and power lines throughout the region Jan. 27, 2021Kris Hooks / CapRadio 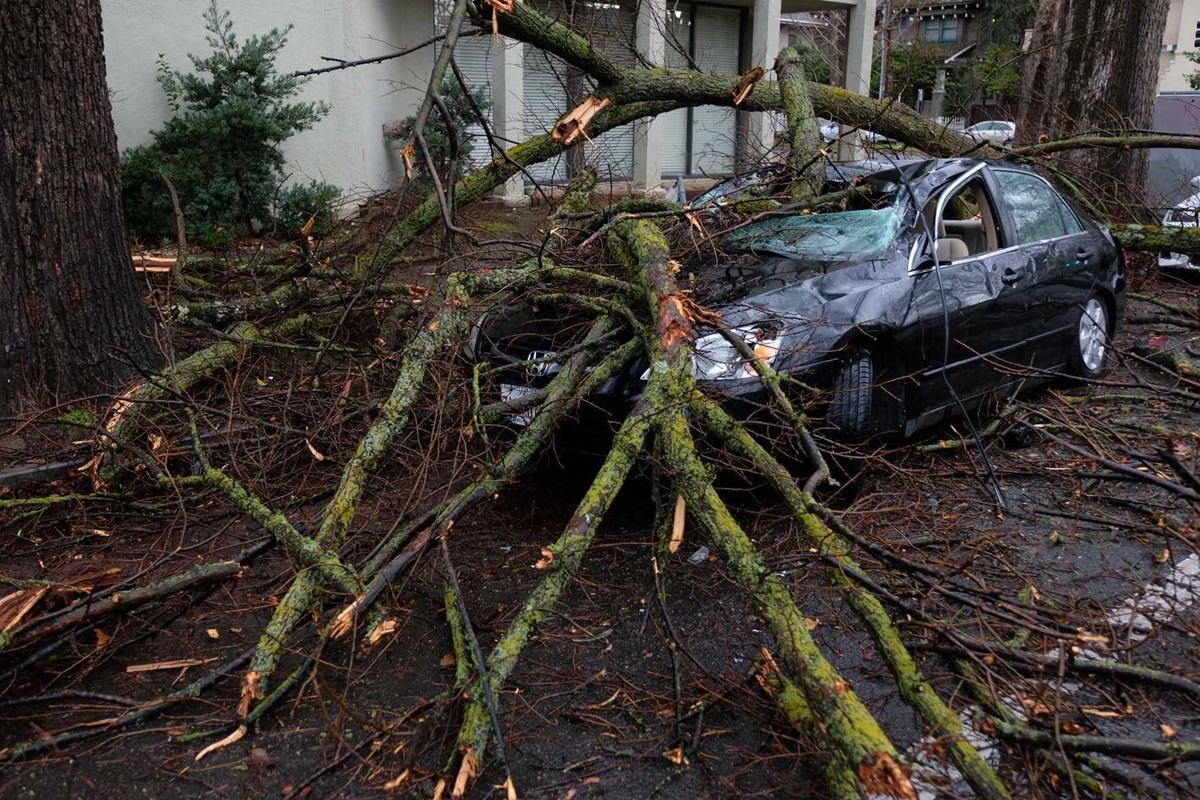 A tree was knocked over by the Jan. 26, 2021 winter storm damaging a car in the Boulevard Park neighborhood in Sacramento.Andrew Nixon / CapRadio

In the Sacramento area as of 8 a.m. Thursday , SMUD estimates that more than 11,000 customers are without power, a number that was north of 160,000 early Wednesday morning.

Christopher Capra, a spokesperson with SMUD, said that crews started to restore power Tuesday evening but had to stop after winds reached above 25 mph.

"That makes it impossible for our crews to get up in bucket trucks," Capra told CapRadio's Insight. "So they couldn't do that work overnight. As the winds started to come down this morning ... they've been able to make significant progress."

Capra said SMUD hopes to have most customers restored Wednesday or early Thursday.

Winds peaked at 67 mph in the Sacramento region, measured at the former McClellan Air Force Base, according to a National Weather Service spokesperson.

Here are the peak wind gusts observed across interior #NorCal over the past 24 hours. #CAwx pic.twitter.com/xMQmAB8Y97

The storm downed trees and powerlines, and disrupted travel around the region. Interstate 5 near the Sacramento International Airport was completely closed due to a crash before the northbound lanes reopened around 8 a.m., and Highway 99 was closed near Elverta Road because of downed power lines.

Sacramento Regional Transit light rail service was down Wednesday, and Sacramento Police are trying to divert cars off of some major streets, including Broadway and W Street.

The Sacramento City Unified School District did not canceled classes. The district is asking students to attempt to sign in to remote learning, but to be aware teachers may have trouble starting online classes due to the weather.

The National Weather Service says valley rain showers and heavy snow in the mountains will continue Wednesday, increasing in the evening. They advise people to avoid travel in the Sierra if possible.

Here's a look at what the radar should look like today and tonight. Numerous valley rain showers with continued heavy snow in the mountains today. Rain and snow increase across the area by early evening. Travel over the Sierra will continue to be dangerous. #cawx pic.twitter.com/R1nfFjC654

"It's still going to be a breezy day," said Michele Mead, a meteorologist with the National Weather Service in Sacramento. "If you don't have to go out today, it's a good idea to stay in."

Mead said this current system will stay active until around Thursday, and then return Sunday through Tuesday. But even with the drenching rain, the region's rainfall and snowpack is still behind where it usually is at this time of year.

"We need five to seven of these storms to be a typical winter, and this is our first one," she said. "It looks like we're good until Monday or Tuesday of next week, then La Nina will return."

Northern California’s first major storm of the year is bringing with it relentless winds, causing power outages throughout the region and untold damage due to felled trees and power lines.

In Sacramento, SMUD at one point registered more than 76,000 customers without power, with few communities spared.

The storm, an atmospheric weather system that is expected to cause flash floods and blizzard conditions beginning Tuesday night and possibly through Friday. Michelle Mead with the National Weather Service told CapRadio that she anticipated “a crazy storm” and urged residents to “stay hunkered down, stay home and stay prepared.”

On Tuesday night, sustained winds of nearly 40 miles per hour were recorded at the Sacramento International Airport, with gusts 58 mph.

The Sacramento region can expect high winds and rain to sustain until at least 4 a.m., according to forecasts.