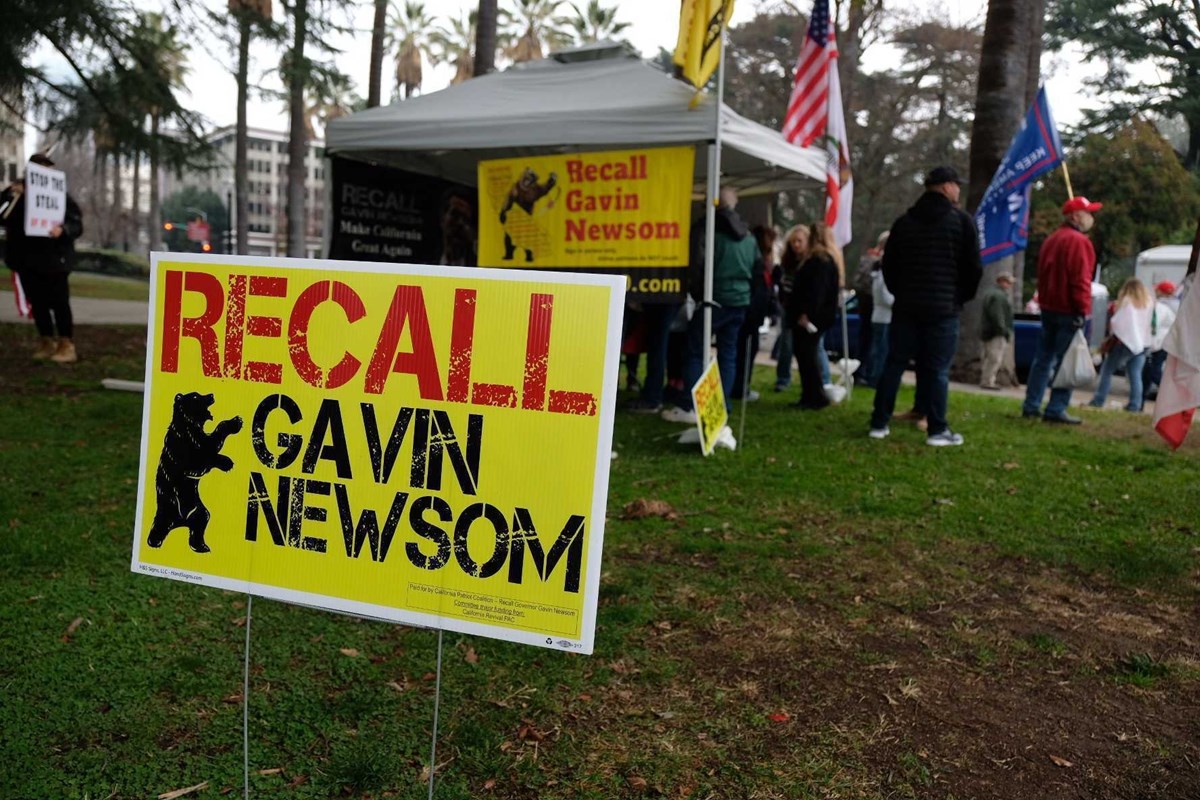 A sign promotes recalling Gov. Gavin Newsom at a Jan. 6 rally of Trump supporters at the California Capitol.

Diana Ciocan posts up at a folding table in a Raley’s supermarket parking lot about 20 minutes north of Sacramento. She’s wearing an attention-grabbing neon green vest, and her car is draped with an enormous banner that reads “Recall Gavin Newsom.” And the 42-year-old hairstylist is gathering signatures to do just that.

“When my salon got shut down, I had a lot of time on my hands,” Ciocan said.

She now volunteers about 20 hours a week, grabbing signatures and recruiting volunteers for the grassroots effort.

“I got involved because it was disturbing to see all the businesses closing,” she added.

For a governor facing the very real threat of a recall election, Newsom has a high approval rating — 58% according to the most recent survey from the Public Policy Institute of California. That’s largely because Democrats have given him high marks throughout the pandemic.

Yet the threat of being the second California governor recalled this millennium is very real.

“It is do or die time for the governor,” is how Renee Van Vechten, a political science professor at the University of Redlands, put it. 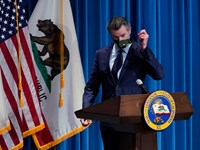 The president of PPIC, CEO Mark Baldassare, says Newsom is facing this moment not necessarily because of his performance on the job, but because divisions remain stark.

“People are very polarized in terms of how they think about their leaders,” he said. “You're going to find people who have very strong feelings for and against this governor.”

For example, the December PPIC report showed while 85% of Democratic voters approve of Newsom’s handling of the economy, 85% of Republicans disapproved. Independent voters were split, with 54% approving.

There haven’t been voter surveys since the most recent stay-at-home orders or the French Laundry incident — when Newsom was photographed dining with a group of lobbyists at the exclusive Napa Valley restaurant.

The snafu sparked major backlash, prompting an apology from the governor while invigorating the recall effort that was previously seen as a longshot. Organizers also got a boost when a judge extended the signature-gathering period because of the pandemic.

Baldassare said the story broke when the PPIC was conducting its latest survey and there wasn’t enough information to break out the results.

But the most recent polling shows Democratic voters continue to support Newsom while still Republicans disapprove.

“Voters’ biggest cue will always be partisanship, as much as people don't want to admit that,” Van Vechten said.

While Newsom is clinging to the good graces of most California voters, there’s a lot riding on the next few weeks — including the all-important COVID-19 vaccine distribution.

“He's on a mountain, and he's driving around on a very narrow road. Could he go off the cliff at any time? It's possible,” she said. “It’s just one little turn of the wheel and he's over the hill. That is what a French Laundry incident represents.”

Despite California’s compounding crises — the pandemic, its economic fallout, worsening wildfires and a growing number of people without homes — Newsom’s supporters have remained loyal. But he shouldn’t rely on that too heavily, Van Vechten warns.

“If the vaccine rollout fails, or if the economy somehow just blows up, or if there's a homelessness crisis that's worsened by sudden evictions of millions of people — that sort of thing could bankrupt a governor” of the political capital necessary to survive a recall, she said.

Meanwhile, recall organizers like Diana Ciocan are doing everything in their power to force a vote on a recall, for a litany of reasons.

“We can do it, I believe with God’s grace and help,” he said. “We have strong patriots coming out here volunteering.”

On any given day, there are dozens — sometimes hundreds — of tables like Ciocan’s up and down California. Organizers say they’ve collected over 1 million signatures to force a recall, but if they want to get the question on the ballot, they’ll need to get about 1 million more in the next six weeks.

Pandemic shutdowns are at the top of the list when it comes to the governor’s detractors, but Ciocan rattles off other reasons she thinks Newsom — the first-term Democratic governor and former mayor of San Francisco — should get the boot halfway through his term:

“We have the highest gas tax in the nation,” Ciocan said. “The highest homelessness in the nation. He is promoting fear. Gavin Newsom goes to the French Laundry and eats without a mask.”

And she and other voters may not have the appetite for another scandal.