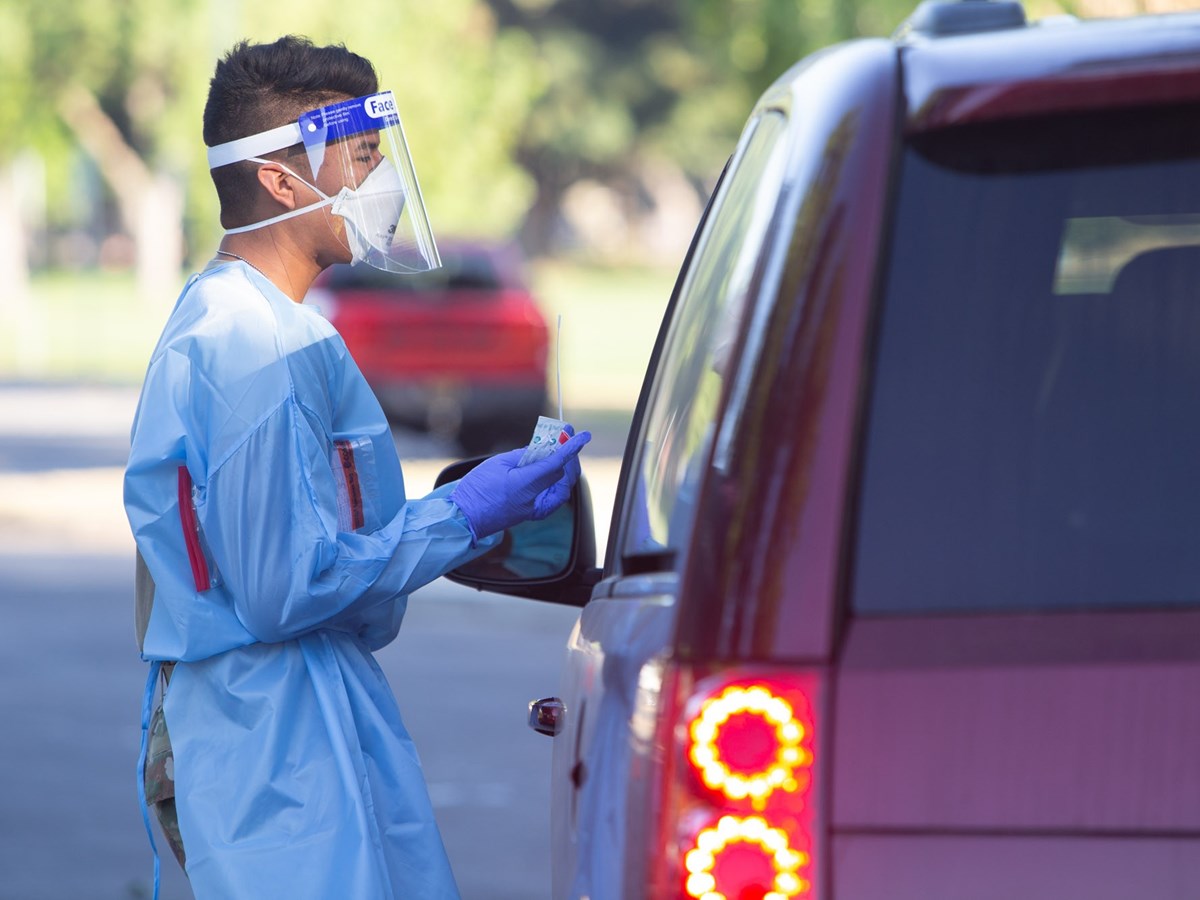 Pfc. Paul Diaz of the National Guard administers a COVID-19 test to a driver in Elk Grove, August 12, 2020.

Counties in the greater Sacramento Region were released from stay-at-home orders for the region Tuesday, ending a six-week period where many businesses had to stop or severely limit business operations.

Sacramento will be the first of California’s regions to have the order lifted. Those counties will reenter the “purple tier,” which means businesses including restaurants, barbershops, hair salons and more will be able to reopen with some restrictions.

“We just got word during the break from the state that the Sacramento region stay-at-home order will be lifted effective immediately today,” county executive Ann Edwards said at Tuesday's Board of Supervisors meeting. “They are looking at the projection out four weeks and anticipating that we will be above 15% ICU bed capacity. And they are thinking that the Thanksgiving-Christmas-New-Year-surge has seen the worst of it, and it’s getting better”

Thank you for signing up for the CapRadio Coronavirus Newsletter

Hours after county officials in the region announced the change, Gov. Gavin Newsom confirmed it on Twitter, saying the state is seeing “stabilization” in intensive care capacity and hospitalization rates.

“Today, effective immediately, we’re pulling the Sacramento region out of the stay-at-home order,” Newsom said in a video posted on Twitter. “They’ll now be in the old blueprint in the purple tier.”

He added, “Hopeful signs—but we must approach them cautiously. Wear a mask. Be safe. Avoid gathering.”

Today, the Sacramento region is coming out of the Regional Stay-at-Home Order.

Hopeful signs—but we must approach them cautiously. Wear a mask. Be safe. Avoid gathering. pic.twitter.com/FfoRfvJct1

At the Tuesday midday announcement, California Health and Human Services Secretary Dr. Mark Ghaly said all regions would remain under the stay-at-home order, but that the state is actively calculating new information and might be updating the status of certain regions late Tuesday or on Wednesday.

The public health departments for Butte and Yuba counties also announced on Tuesday that they would be emerging from the stay-at-home order “immediately.”

Lisa Almaguer, a spokesperson for Butte County Public Health, says the county received an email on Tuesday from the California Department of Public Health stating the regional stay-at-home order for the Greater Sacramento region will be lifted effective immediately. They also received an additional email from CDPH stating the governor's office intended to affirm lifting of the regional order late Tuesday, according to Almaguer.

Sacramento Supervisor Sue Frost posted on Facebook Tuesday afternoon that “the state has cleared the Sacramento Region to end the stay-at-home order and return to the purple tier starting today” based on a four-week projection of 19.1% ICU capacity for the region.

“This is the first step back to reopening our County,” she wrote.