Why Is This South Sacramento Area A COVID-19 Hot Spot? 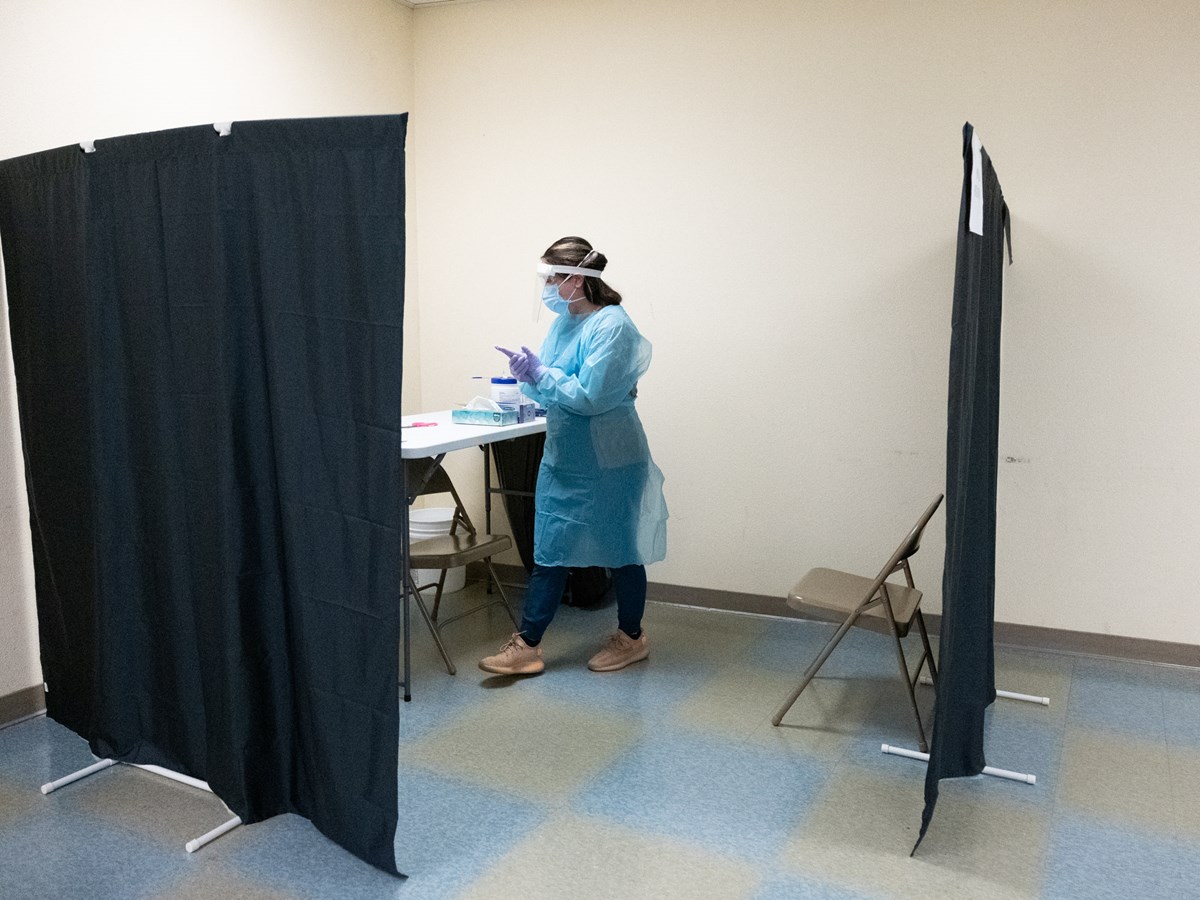 Nurse Adriana Arguella sanitizes her hands between testing people for COVID-19 at a testing site in Elk Grove on Tuesday, Jan. 5, 2021.

A.J Crisostomo’s parents have lived in Sacramento’s 95823 zip code since they immigrated to the United States from the Philippines 35 years ago. Since then, nothing has changed their life in their neighborhood as much as the pandemic.

Crisostomo said there are a lot of immigrant families in the area that live in multigenerational homes, and before the pandemic, his parents would socialize with neighbors outside. But now he says, you don’t see many people outside anymore.

Neighborhoods in the 95823 zip code, which encompasses the Valley Hi, Laguna and Parkway neighborhoods, have been a COVID-19 hot spot since the start of the pandemic. Five thousand cases have been reported there since March, the highest of any zip code in Sacramento County by more than a thousand cases, according to the municipality’s COVID-19 dashboard.

In the past 30 days, there have been over 1,500 cases reported in this area alone.

County Public Health Officer, Dr. Olivia Kasirye said she believes cases are higher here because of a number of nursing homes and assisted living facilities, but also because of the area’s high immigrant and low-income population.

“Right from the start, [95823] was one of the areas where we were seeing the largest number of cases,” said Kasirye, adding that the high rates are due to a number of factors, such as the density and demographics of the people who live there.

“In many of the neighborhoods where you have a larger number of people working in essential services where they have to go to work, they’re not able to work from home, it does put them at risk,” said Kasirye.

The population that lives in the 95823 zip code is 24% Asian, 38% Hispanic and 19% Black, according to county population statistics. Nearly a quarter of families in the area live below the poverty line.

Crisostomo says his mom knows the virus is going around her community, and she’s afraid of getting it from her neighbors. So she even limits the time she spends walking around outside her house.

“To make sure that she’s not really walking the dog in that neighborhood, she’ll travel to other parts of Sacramento,” Crisostomo said.

Public officials and community leaders have been trying to bring down infection rates in the area.

Bobby Dalton Roy runs an API-specific testing site through the county in South Sacramento and recently coordinated the opening of a second site in Elk Grove, which is also currently experiencing high  rates of COVID-19.

Roy says many immigrant families have big households, and that can lead to more transmission of the virus.

“In the Filipino community, we’ll keep grandparents and great-grandparents with the family as well as kids and grandkids under the same roof to support each other,” Roy said. He adds that poverty prevents many families from protecting themselves from COVID-19.

“Even before the pandemic, when you looked at the average life expectancy in the 95823 compared to another area in the county like East Sacramento, the life expectancy was lower, already,” he said. “Add on top of that the layer of COVID, and you have major health impacts that affect everything that’s going on here.”

The Latino Economic Council, which recently launched the campaign “Aplastar El Virus,” or “Crush the Virus,” is investing $100,000 in COVID-19 education with Latinos in this zip code.

“We put up billboards in the affected areas, we’ve also done robo-calls to get the message into thousands of households,” said Jim Gonzales, chair of the Latino Economic Council. He said they also worked closely with the consulate general of Mexico to be able to connect with more people.

Mai Vang, one of the two city council members who represents the 95823 zip code, said she’s planning a series of virtual town halls in the coming weeks, which will address the high COVID-19 rates in the community.

“Many of our residents are doing their very best to follow guidelines to the best of their ability,” said Vang. “But in many cases it’s not possible to maintain complete physical distancing.”

Vang said during the upcoming town halls, residents will be able to ask not just about COVID but about food insecurity, and housing and job protections for essential workers.

Gonzales of the Economic Council says his organization will be working to educate and build trust around the new COVID-19 vaccine.

“With the vaccinations coming, we gotta make sure the people trust the vaccination and when it’s available, [that] they get vaccinated,” Gonzales said. “We’re just scratching the surface here.”