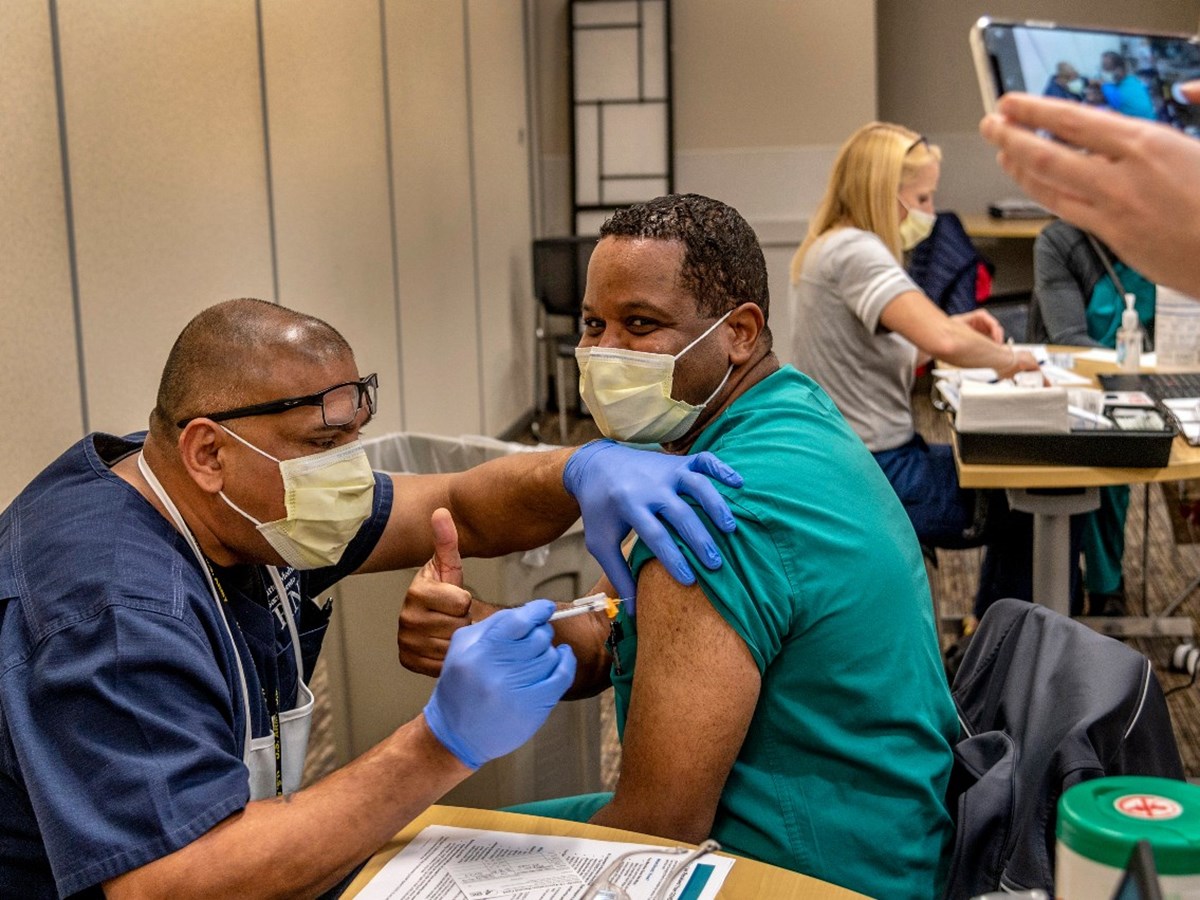 Nurse practitioner Robert McCary gives the thumbs up as his picture is taken while nurse Anil Shandil gives him the Pfizer-BioNTech COVID-19 vaccine at Sutter Medical Center in Sacramento, Calif., Friday, Dec. 18, 2020.

Sacramento health care workers and nursing home residents have been receiving COVID-19 vaccines since last week, and county health departments are beginning to make plans for wider distribution. But health officials say it will still be several months before the general public is lining up for shots.

California has mapped out several phases of vaccine distribution, with more specific tiers within each phase. So far the first phase includes health providers and frontline workers, the proposed second phase covers people over 75, high-risk people age 64-75 and workers in child care, law enforcement and agriculture. The third phase, which is still being fine-tuned by the state’s Community Vaccine Advisory Committee, could include all remaining elderly people, adults with underlying conditions and workers in the waste management, defense and government sectors.

Thank you for signing up for CapRadio's coronavirus newsletter.

As county health departments dole out the vaccine doses they have to people in the first tier of the first phase, they’re also thinking ahead to widespread distribution.

Blaire Bryant, associate legislative director for health with the National Association of Counties, says if a county hasn’t begun making plans for mass roll-out already, “now is the time to start.”

“Having a structure in place that will allow vaccinations to easily get into the arms of your community is important,” she said. “That means enrolling as many providers and eligible entities to distribute the vaccine as possible.”

Sacramento County health workers are coordinating with hospitals, long-term care facilities and other entities to ensure that the doses they’ve been allocated by the state are getting to people in the first tier of Phase 1A. They’re also helping potential vaccine providers get ready to give shots.

But this first phase is likely to take months, especially because Sacramento County is a hub for the health care industry, said Rachel Allen, senior health program coordinator for the county’s immunization assistance program. People are allotted doses based on the county they work in, not the county they live in.

Allen says county workers are putting in 7-day weeks to try to get through the first tier and onto the second.

“We’re working as hard and fast as we can,” she said. “We’re also trying to be really cautious and thoughtful in our approach, because we want to get it right … As we surge up and open up this funnel of people coming in and we have more doses and more people, I think we’ll have a really great system to capture everybody.”

How quickly counties can move through these initial priority groups and into phases that reach the general public depends on how many vaccine doses California has access to and what infrastructure exists for distributing them.

With millions of Californians employed in frontline jobs, those supplies are expected to get used up quickly. Experts predict healthy people who work from home won’t have access to the vaccine until spring or summer.

That uncertainty could make it difficult for county health departments to prepare for what will be a logistically tricky mass roll-out.

But all the plans are sketchy, and many of them say 'we plan to plan' because we don't know what will be available.

“We really don’t know what the cadence of distribution of the vaccine is going to be yet,” she said. “Some of the vaccines haven’t materialized. And you don’t want to schedule vaccination clinics until you’re sure you have something to give out, because imagine what that would look like.”

Counties have been asked to provide the state with information about their vaccine distribution plans and their cold storage capacity.

“But all the plans are sketchy, and many of them say ‘we plan to plan’ because we don’t know what will be available,” Trochet said.

She says developing a vaccine distribution strategy is an especially daunting task when counties are juggling a surge in COVID-19 cases.

“Health departments are right now multitasking — they’re still doing testing and contact tracing, along with planning for the vaccines and actually giving the vaccines,” she said. “This is all a work in progress.” 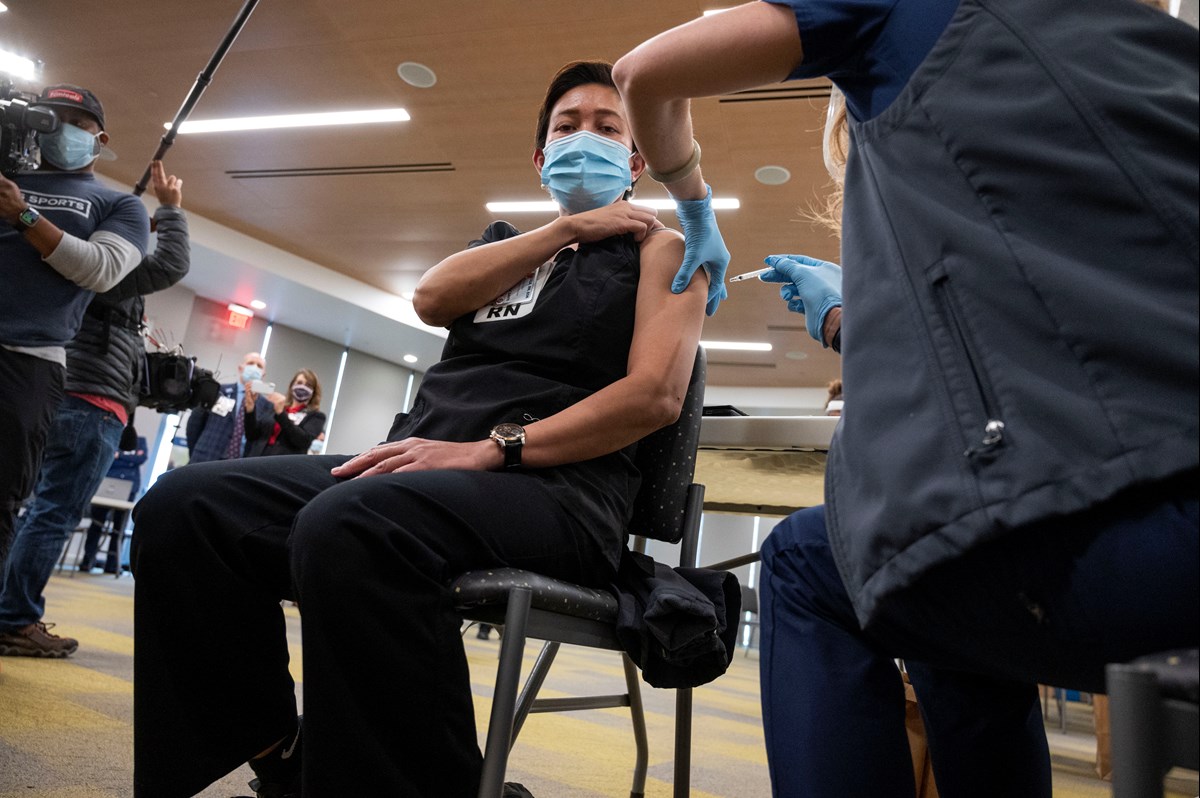 Many counties say COVID-19 vaccine distribution will look a lot like immunization efforts that occur during flu season each year. People will likely be able to access shots at pharmacies, or through their primary care providers. Counties may set up walk-in and drive-up clinics for people who are uninsured or don’t have access to a doctor.

Rachel Allen of Sacramento County says this year’s flu season was a “dry run” for the COVID-19 vaccine.

“We had brought on a lot of new nurses as well, so it was a great time to season them and get them experienced with transporting vaccine and administering vaccine,” she said. “But we have to tweak it a little bit. The two first vaccines we have have such specific handling instructions that we have to be really careful.”

The National Association of Counties has been tracking vaccine distribution plans across the U.S., including how local health departments are using coronavirus relief funds provided by the federal government.

Sacramento County received just over $181 million in CARES Act funding, and plans to spend $3 million of that on supplies and resources necessary to distribute the COVID-19 vaccine to the public. That includes purchasing syringes, refrigeration bags, and other supplies.

The county has also approved $250,000 of this money for two trucks and two trailers to transport the vaccine to dispensing sites.

“Those are really for our broader response for any emergency in the long haul, but this is the perfect time to have them and put them into play,” she said. “To easily set up a pod or a pop-up onsite and have everything contained in that unit.”

Jenny Tan, public information officer with Yolo County, says health officials will use “mixed tactics” to try to distribute the vaccine to hard-to-reach populations. She says that will likely include pharmacies, medical offices, drive-through clinics and site visits for people with mobility issues.

Getting the Word Out

Some counties have already begun putting out public health messaging to encourage vaccine adherence, and others are gearing up to do so this spring. Experts say this will be especially important given how many people are hesitant about the vaccine, either due to misinformation about its safety or historical and cultural mistrust.

Allen says the priority at the moment is reaching out to people in the first two tiers of Phase 1A.

“If it’s your tier, we’ve probably talked to you or reached out to you,” she said. “As we’re growing and getting toward larger vaccination efforts in the community, there will be a concerted effort to reach people through public campaigns … We really just want people to know that we’re not going to forget anyone.”

The county recently launched a page on their website to provide people with updated information about vaccines.

As we're growing and getting toward larger vaccination efforts in the community, there will be a concerted effort to reach people through public campaigns ... We really just want people to know that we're not going to forget anyone.

“We don’t need to rebuild and reinvent the wheel, we really just want to leverage the existing networks that are already out there and use that network to get information out, to encourage people to vaccinate, and to get out the details of how that will happen,” she said.

Dr. Eric Sergienko, health officer for Mariposa County who also spoke at the meeting, says distributing the vaccine will not be as difficult as other challenges health departments faced during the pandemic, such as enforcing masking and social distancing requirements, often without the support of law enforcement or local elected officials.

“I feel markedly more comfortable with vaccine distribution than I do with other elements of the pandemic response because it’s within public health and health care’s wheelhouse,” he said.

Counties are also preparing to rise to some of the logistical challenges that the Moderna and Pfizer vaccines prevent.

Chief among them is the risk of wasting vaccines, Allen said. Unlike flu vaccines, which have a longer shelf life, she says both of the vaccines that are currently available need to be used within a few hours of being opened.

“We don’t want to waste any doses, they’re so scarce,” she said. “We have to not have too many doses prepared but have enough to meet the people that are coming.”

Allen said there’s also a unique requirement that after someone gets a COVID-19 vaccine, they have to be monitored by medical personnel for 15 minutes to ensure they don’t experience any immediate adverse effects.

“In the clinic setting it’s challenging. We can’t have everyone come back out and crowd in the waiting room … we have to have them six feet apart,” she said.

In addition to finding fixes to these hurdles, counties are currently encouraging doctors and other professionals who want to administer the vaccine to get signed up through the state’s approval program. They’re also preparing materials to help track who’s getting the vaccine, such as cards that will be given out to people who get the first shot documenting which vaccine they had and what shot is due next.