A massive car caravan of demonstrators — flying saffron-colored Sikh flags while hanging out of sunroofs and standing atop buses — flooded downtown Sacramento’s streets on Saturday. The protesters aimed to bring attention to the plight of farmers in India, and the procession also brought area traffic to a standstill near the Capitol.

Downtown also served as a battleground between two groups who have clashed every weekend since the general election. Individuals wearing black, largely aligned with the far-left antifa ideology, confronted members of the far-right paramilitary Proud Boys. Both groups have shown a propensity for violent conflict during recent protests in Sacramento and elsewhere. 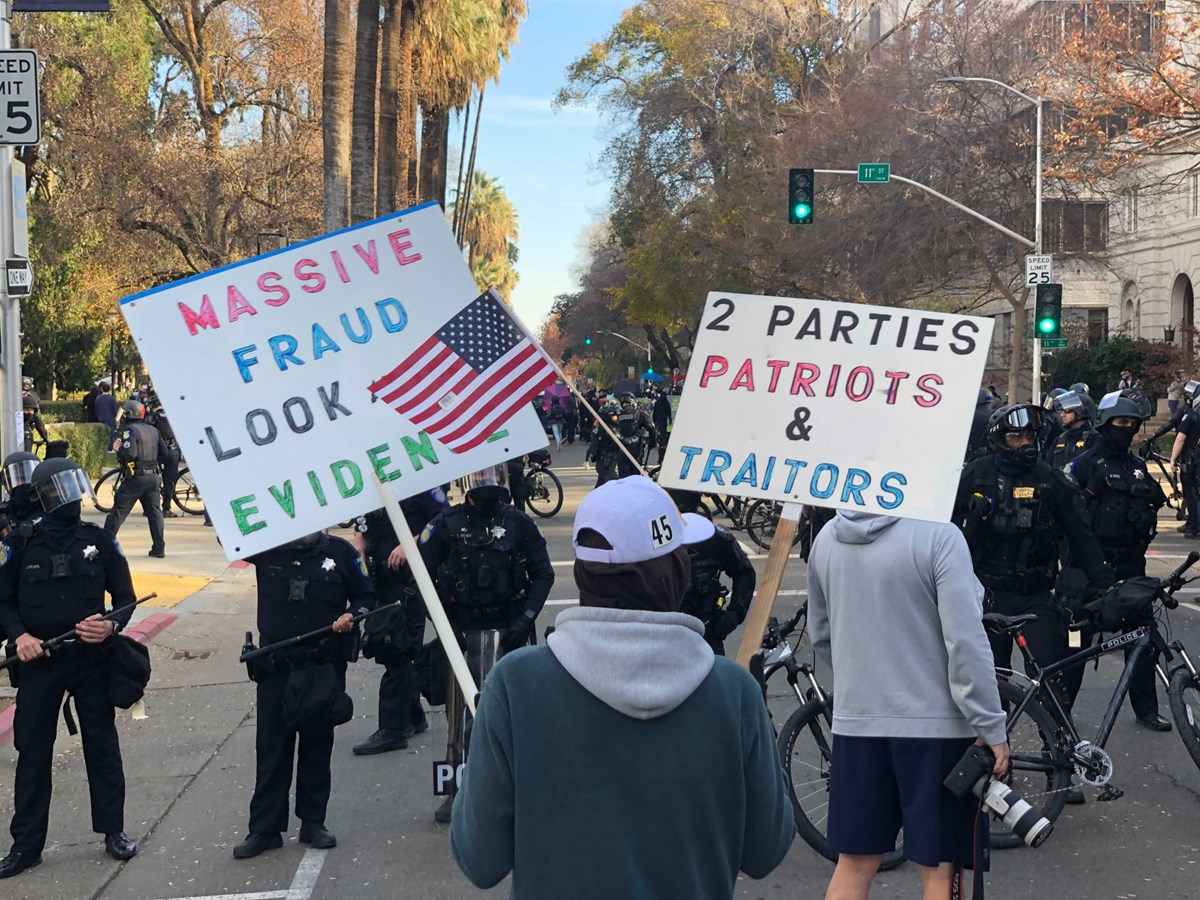 A car demonstration in support of farmers in India collided with people in all black clothing, some aligned with antifa, and Proud Boys in downtown Sacramento on Saturday.Nick Miller / CapRadio

At one point, Sikh and Indian protesters’ cars came to a halt when a fight between Proud Boys and antifa demonstrators overtook a downtown intersection, with individuals throwing punches and spraying aerosol irritants. Sacramento Police Department officers detained people from both groups as traffic backed up for blocks.

But it was the car caravan that drew the most attention on Saturday, dwarfing the pro-Trump demonstrators in front of the Capitol’s west steps, who gathered for the seventh consecutive weekend to protest the results of the election.

Scenes from the anti-Modi demonstration that is dwarfing the “Stop the Steal” gathering at California’s Capitol now.

Antifa and Proud Boys still facing off in downtown’s streets, as well. pic.twitter.com/Y1xqY9A47u

Sikh and Indian demonstrators are demanding more attention on farmers, whose protests in India against the policies of President Nerandra Modi have drawn huge crowds but few headlines in the United States.

Gurpreet Gidha, of the Sacramento suburb of Antelope, says she specifically was protesting against new legislation passed earlier this year in India. “It’s affecting all of India. All the farmers. The three laws they passed basically are going to privatize and corporatize the farmers.” She added that she wants the U.S. government to stand up against the Indian government.

Preet Singh of Sacramento says the new rules in India make it difficult for farmers to grow and sell their crops. “This is important as a human rights issue, because a large amount of people in India are struggling to feed their families and have committed suicide,” he said. “We’re all from India, and it hits us deep, so we’re here on their behalf to spread awareness because they don’t have a voice.”

The Indian government claims the new laws will modernize the farming industry and allow for more private money in agriculture. 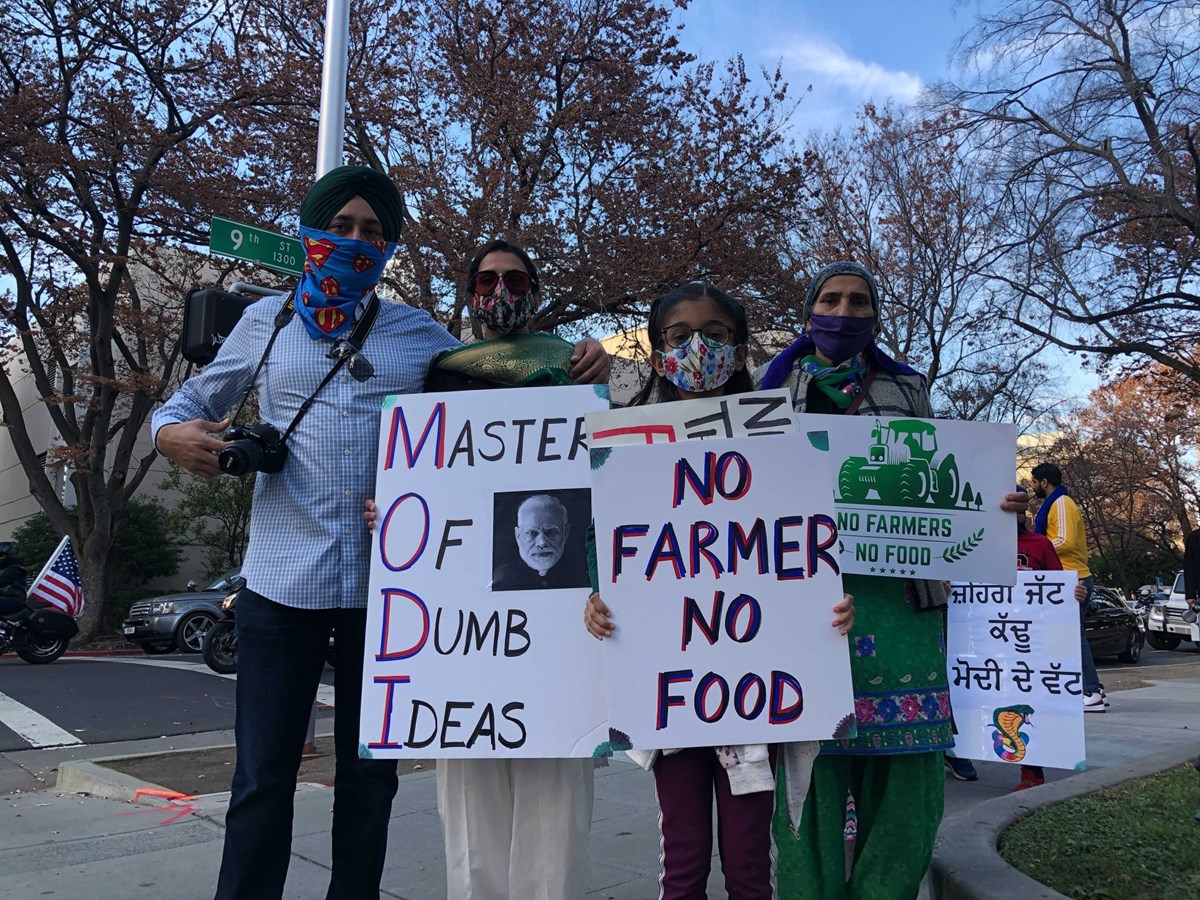 A massive car caravan of demonstrators aimed to bring attention to the plight of farmers in India flooded downtown Sacramento’s streets on Saturday.Nick Miller / CapRadio 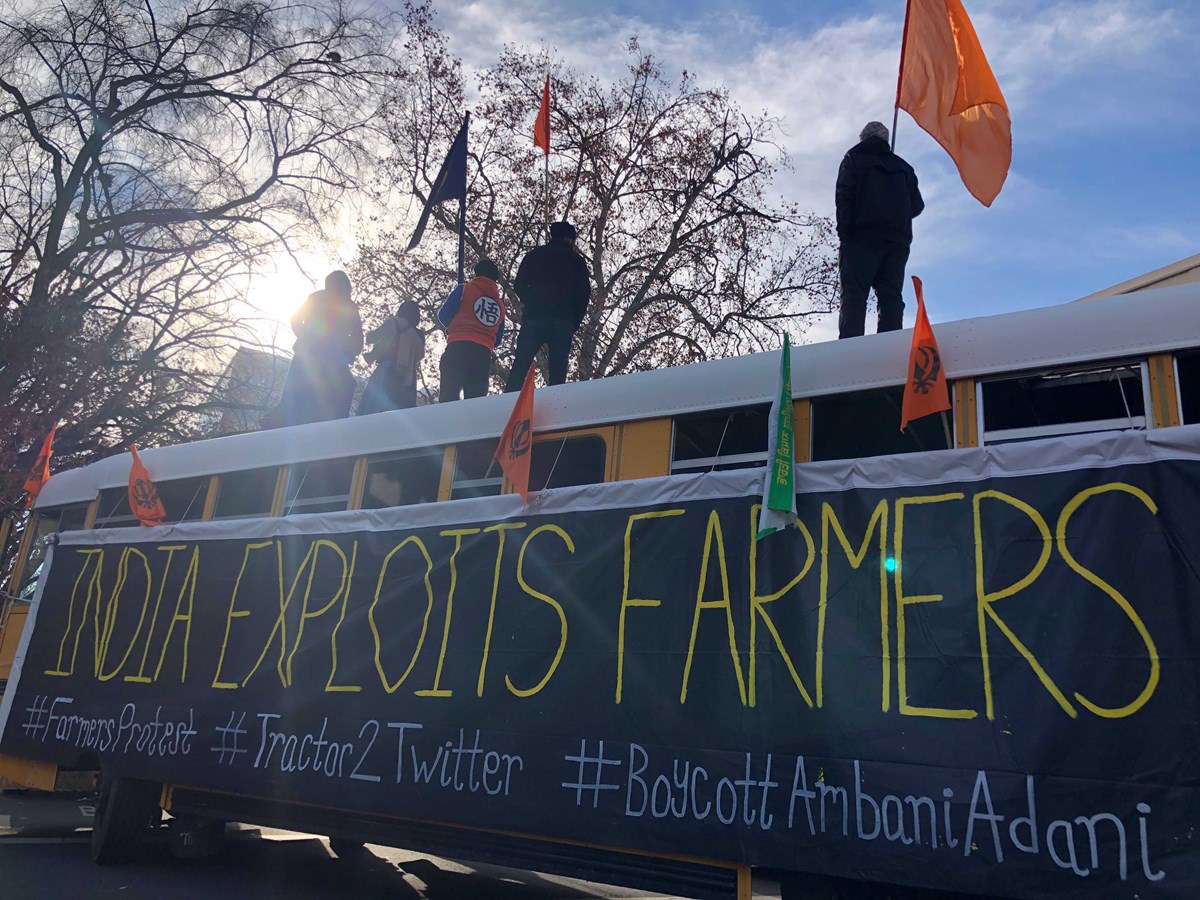 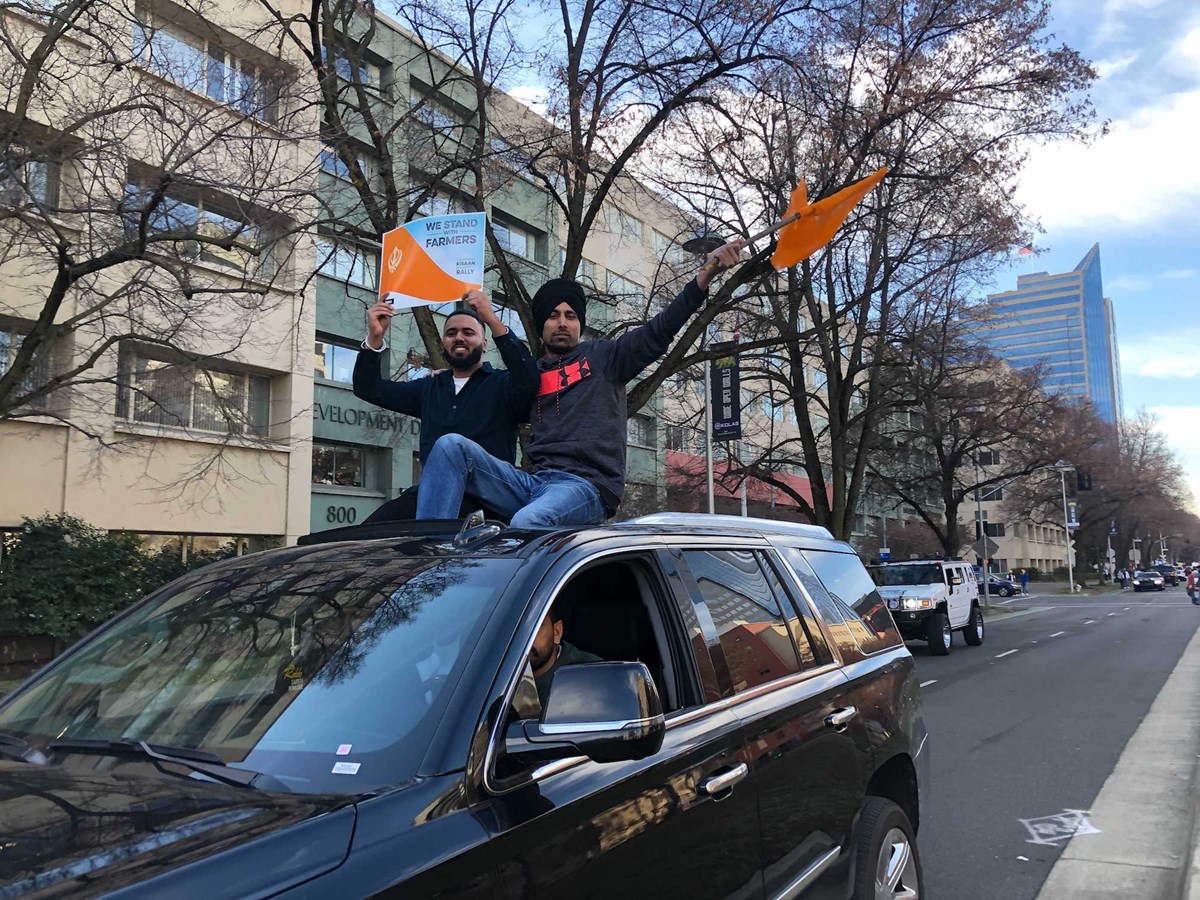 The car caravan included people of all ages and was without incident, although some demonstrators expressed frustration that Proud Boy and antifa protester standoffs made for a tense law-enforcement situation around Sikh and Punjabi families.

Antifa protesters started the day at Fremont Park just before noon. As they began marching toward the Capitol, some individuals beat a man who filmed the group with his phone.

Several marchers used umbrellas to block the man’s view and told him to stop filming, and one person threw water on him. When the man pushed the water bottle away, antifa marchers punched and tackled him. Others joined in and kicked him while he was on the ground.

The man, who identified himself to CapRadio as Matt, sustained cuts to his face and neck, and indicated he was sprayed with some kind of irritant.

“I said, ‘I can film here. I’m not doing anyone any harm,’” he said. “Somebody knocked the phone out of my hand, I went to get the phone, and that’s when guys from behind me started punching my head. 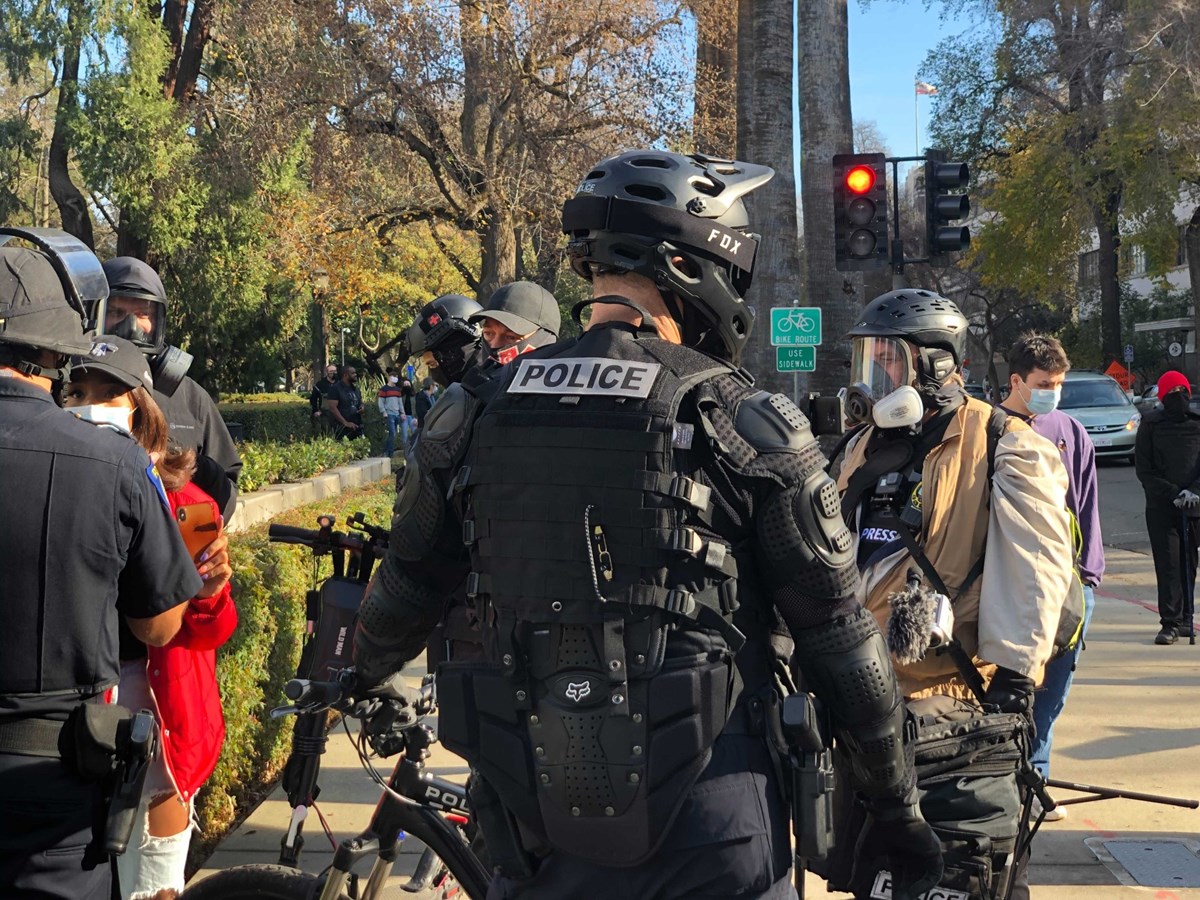 Antifa-aligned protesters often demand members of the press and passersby not record their actions, claiming that the videos are used by right-wing groups to publicly broadcast their identities and law enforcement to crack down on protest activity. Two protesters clad in black threatened to break a CapRadio reporter’s phone on Saturday if he took photos or videos of the group’s actions.

The marchers later confronted a small group of Proud Boys near Capitol Park on N Street, and police officers on bicycles quickly arrived to separate the two groups.

Line of officers advancing on protesters. At least one demonstrator detained. Some protesters pushed down by cops.

Sacramento police reported three arrests on Saturday, including a “weapons violations” and one robbery, when a bystander had their cell phone taken by demonstrators. Four officers also sustained minor injuries.

A spokesperson told CapRadio that Sacramento police and California Highway Patrol were the only law enforcement agencies operating downtown on Saturday.

Saturday’s clashes between the two groups come after weeks of tension and even more violent brawls, which left several people beaten and resulted nearly a dozen arrests.