New stay-at-home orders could be coming to areas of California where COVID-19 is spreading out of control and threatening capacity in hospitals’ intensive care units, Gov. Gavin Newsom warned Monday.

Over the weekend, California reported the highest number of coronavirus hospitalizations since the onset of the pandemic. New case numbers continue to top those seen during the state's summer surge, with a seven-day average of 14,657 daily cases. According to Newsom, the state’s previous case numbers peaked in July with a seven-day average of 9,881.

"If these trends continue, we're going to have to take much more dramatic, arguably drastic, action," Newsom said.

He hinted that could start in the state’s purple-tier counties, where the virus is considered widespread. Of the state’s 58 counties, 51 are currently in the purple tier, which bans indoor operations for worship services and businesses like gyms and restaurants and limits in-store capacity for other businesses.

As hospitalizations and case numbers rise, Newsom warned that intensive care units at California hospitals could be over capacity by mid-December unless something changes.

“We don’t anticipate that,” he said, hinting at looming new restrictions. “We intend to bend this proverbial curve.” 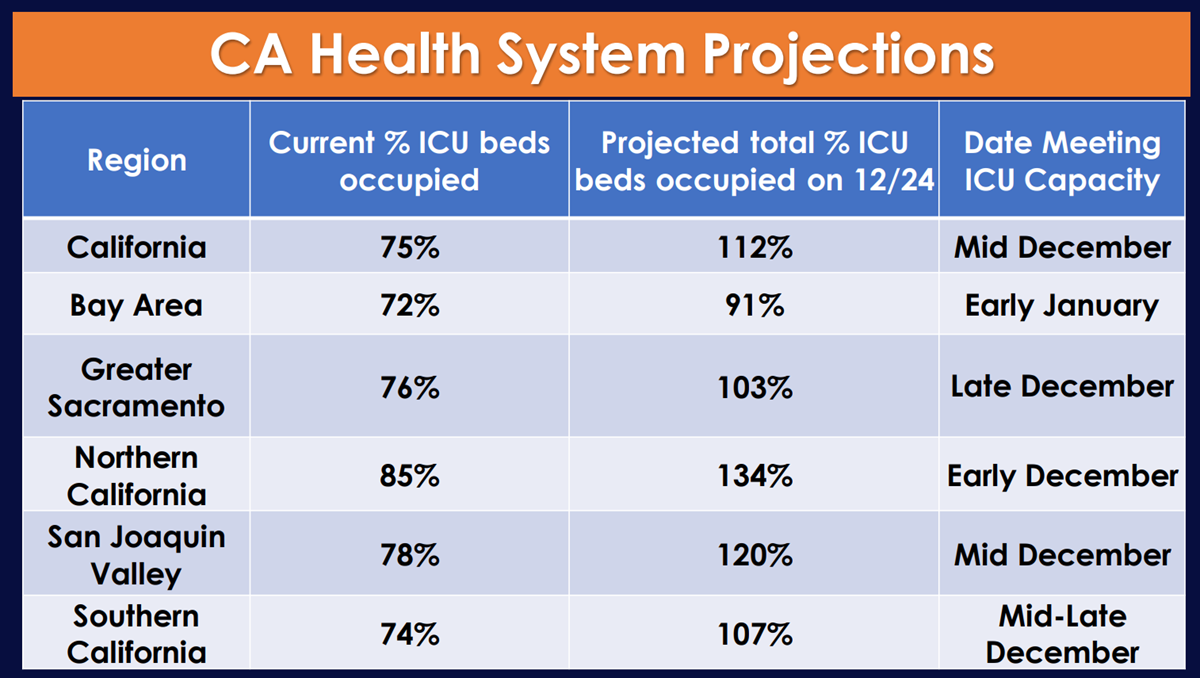 “Everything’s on the table,” said Health and Human Services Secretary Dr. Mark Ghaly, the state’s top public health official. The state announced a “limited stay-at-home order” on Nov. 19 which included restrictions on non-essential businesses and gatherings between 10 p.m. and 5 a.m.

Three-quarters of the state’s ICU beds are currently in use, in what Carmela Coyle, president and CEO of the California Hospital Association, called an “alarming and exponential increase from earlier this year.”

“We expect unprecedented numbers of COVID-19 patients in next two to three weeks that will further strain limited resources, like PPE, testing supplies, and our frontline health care workers,” Coyle said.

Health officials expect even more new cases in the days and weeks following Thanksgiving. While private social gatherings are one of the main drivers of infections, Ghaly said the virus has become so widespread it reaches nearly every part of daily life.

“Although people want us to identify the sectors where we see transmission the most, the truth is right now, it’s just all around our communities,” he said. “Everyone is somewhat vulnerable to having an encounter with someone who’s infected. They themselves may be asymptomatic or pre-symptomatic.”

With another round of restrictions on the horizon, Newsom also unveiled help for small businesses struggling to get by during the pandemic. The state will extend sales tax deadlines for companies reporting less than $1 million in taxes and will dole out $500 million in grants for nonprofits and small businesses hit hard by the pandemic. When the program goes online, businesses will be eligible for grants up to $25,000, Newsom said. Businesses that are interested in being notified when the program starts can sign up here.

Those resources will be a “bridge” to January, when the legislature reconvenes and can work on passing legislation to support small businesses, Newsom said

The governor also called on Congress to pass another relief package, noting it has been nearly 250 days since the CARES Act was passed, which provided stimulus checks to Americans and forgivable loans for small businesses, among other supports.

“Even a state as rich and resourced as California ... it’s not enough,” he said of the lack of aid since March. Newsom called on lawmakers in Congress to “do the damn right thing. And not do it as Democrats and Republicans, but as Americans first.”

Watch as California Gov. Gavin Newsom gives an update on the state's response to COVID-19. This originally streamed at 12:30 p.m on Nov. 30.