Gov. Gavin Newsom announced Wednesday the first round of awards through Project Homekey, an effort to purchase and convert motels and vacant apartment buildings into housing for the homeless.

A group of seven counties and cities will receive a combined $76.5 million for 10 projects, totaling nearly 580 units. Contra Costa County will use $21.6 million to acquire a 174-unit Motel 6; the city of South Lake Tahoe will use $9.6 million to convert four buildings into 82 units of long-term housing. One city, El Centro, will build 13 “tiny home” duplexes, creating 26 units for homeless students.

“The state of California has a responsibility to help cities and counties” fight homelessness, Newsom said at a press conference Wednesday.

California has $600 million to spend on Project Homekey, but there’s a catch: It has to be used in less than 4 months. The funding is tied to federal coronavirus relief money, which expires at the end of the year. Any unspent funds will be forfeited.

He says a typical apartment unit in the Bay Area costs about $700,000 when building from scratch. Converting units in an existing motel will cost about a quarter of that.

Cities and counties are expected to help cover the cost of wraparound services and ongoing costs to maintain the properties. Liccardo says those services are much more effective when someone has stable housing.

“The drug rehab services and job placement simply will not help a person get on their feet as long as they’re living under a bridge,” he said.

A number of other cities and counties have applied for funding through Project Homekey, and more awards are expected in the coming weeks.

The city of Sacramento has applied for about $30 million through Project Homekey. The money would go toward the purchase and conversion of 2 motels into 224 units for people experiencing homelessness. A portion of the funds would also cover the cost of building nine modular units, in partnership with WEAVE, a nonprofit for survivors of domestic violence and sexual assault.

He said he’s confident the city will receive funding for the projects, and that the ticking clock to spend the money won’t be a hindrance.

“Tight timelines tend to focus the mind,” he said. “I’m confident we can meet the deadline.” 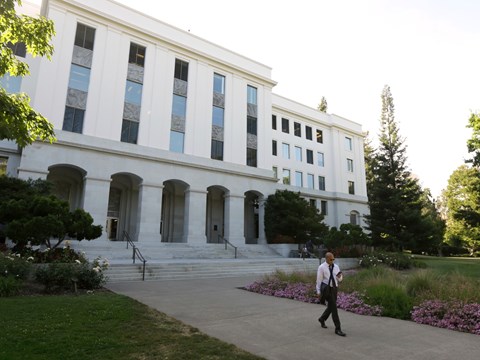