A Truncated Session, Gamesmanship And Police Opposition: Why So Many Police Reforms Failed In California’s Liberal Legislature

After days of nationwide protests in June following George Floyd’s death under the knees of Minneapolis police, California lawmakers knelt in a moment of silence and solidarity on the steps of the state Capitol.

They pledged to pass laws and work with their communities to make them safer. It was the same day Floyd’s funeral took place in Houston.

Months later, the Democrat-led state legislature failed to pass several bills — one of which was named the “George Floyd Law” — that would have addressed the same issues that kept protesters in the streets across the country.

Lawmakers did pass a handful of police reform bills before they adjourned early Tuesday morning, including measures to ban police use of neck restraints and to require independent investigations into law enforcement killings of unarmed civilians.

But Sen. Steven Bradford (D–Gardena), who sponsored perhaps the most closely-watched policing bill, says the measures that would have “had a direct impact on the community — those are the bills that didn’t get out.”

That includes his Senate Bill 731, which would have created a process to strip the badges from officers who are convicted of certain crimes or charged with misconduct. The rules are intended to keep so-called “bad apple” cops hopping from department to department.

California is one of only five states — along with Hawaii, Massachusetts, New Jersey and Rhode Island — that does not currently have a process to decertify police, according to the National Conference of State Legislatures.

In the days following the session, there was plenty of blame to go around over why important bills dealing with public safety, housing and other measures failed.

Bradford blames political gamesmanship between the chambers and members across the aisle on the final night. Senate Republicans, forced to vote remotely after a member of their caucus tested positive for coronavirus, filibustered bills and forced a shutdown of the entire chamber for nearly two hours.

But Bradford’s bill died in the Assembly, which is also controlled by Democrats.

Assembly Speaker Anthony Rendon (D–Lakewood) told Politico it wasn’t brought to the floor because it didn’t have the votes to pass. But Bradford says that’s not completely true. He maintains that he and the bill’s Assembly floor manager, Asm. Shirley Weber (D–San Diego), had identified 31 solid “yes” votes, with 14 others leaning “aye” — putting approval within striking distance.

“We had our votes, but the speaker wouldn’t know that unless he allowed us to have our day in the sun,” Bradford said in an interview with CapRadio this week. 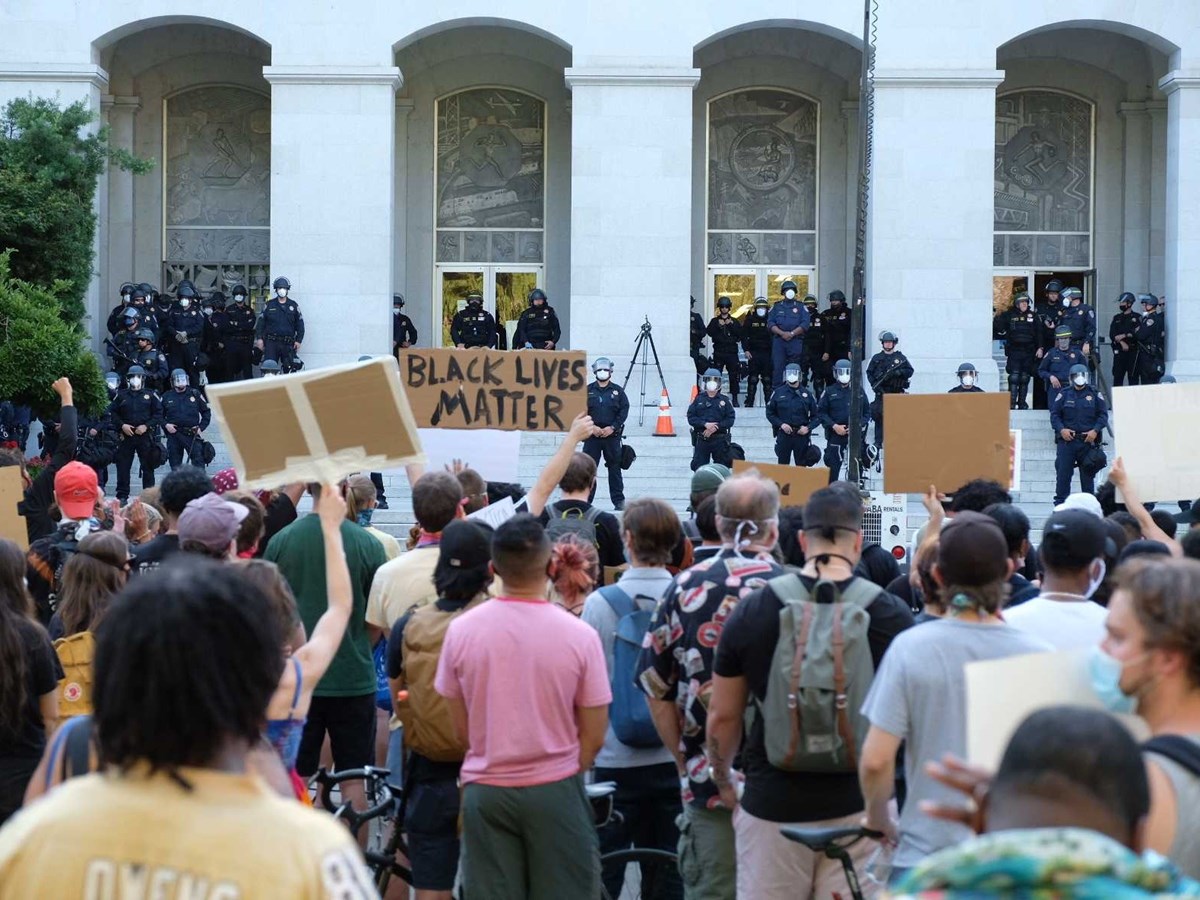 Demonstrators at the east steps of the California State Capitol in Sacramento on June 3, 2020 protest the killing of George Floyd by Minneapolis police.Andrew Nixon / CapRadio

Because the bill was never brought up for debate, Bradford did not have an opportunity to “work the bill” — or attempt to persuade hesitant colleagues to cast a vote in the bill’s favor if it didn’t immediately reach the required 41-vote threshold.

Police unions, barred from the Capitol due to the coronavirus, lobbied vigorously but remotely against the bill. “They lit members’ phones up,” Bradford said.

Brian Marvel, President of the Peace Officers Research Association of California, said the group does support some process for decertifying problem cops, but that SB 731 went too far.

“With the COVID-19 truncated process this year, a lot of the public safety bills didn’t get quite the vetting we would have liked to have seen” through committee hearings and regular negotiations, Marvel said.

He said Bradford refused to work with law enforcement groups until the legislative session was nearly over. “I don’t think Senator Bradford and his sponsors wanted compromise on this,” he said. “They felt that with the amount of stuff going on nationally, they felt that they could jam it through.”

Marvel’s main concern with the bill was the proposed makeup of an accountability panel, which would have included three members from law enforcement and six others not from a police background. He argues the board would have immediately been stacked against officers.

“You’re setting up a process that’s going to be a failure. I don’t think California wants to go through that,” he said.

“Clearly, some colleagues felt like there needed to be more conversation” on the policing measures, Atkins told reporters around 2 a.m. after the Senate adjourned.

In a statement Thursday, Atkins and Bradford pledged to “carry the momentum behind SB 731 through to the next legislative session,” indicating there would not be a special session on policing reform bills, as some advocates have requested.

Other public safety bills that stalled include one — also opposed by law enforcement groups — that would have made complaints of police violence more open to the public.

Another would have restricted police from using tear gas, rubber bullets and other “less-lethal” crowd control tactics during protests, after scores of demonstrators and journalists reported injuries during summer demonstrations.

Author Assemblywoman Lorena Gonzalez (D–San Diego) echoed disappointment that her measure was a casualty of stall tactics and a shortened clock, but blamed one group of lawmakers in particular.

“To be clear, the next nonviolent protester who is injured by one of these weapons in California can point directly at the dysfunction and filibustering of the Senate Republicans as the reason why there are still no standards for ‘less than lethal’ force,” she said in a statement. 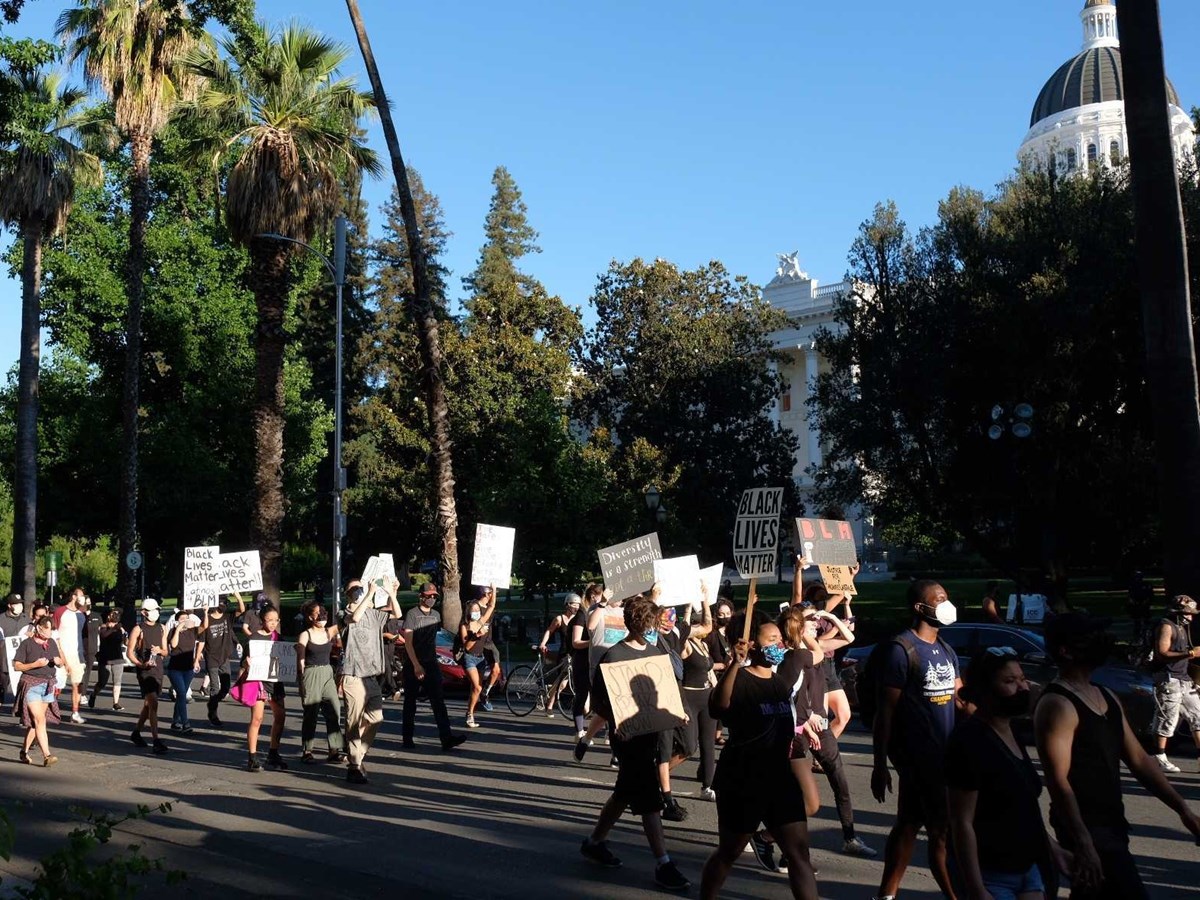 Demonstrators march down L Street in downtown Sacramento on June 3, 2020 to protest the killing of George Floyd by Minneapolis police.Andrew Nixon / CapRadio

A measure nicknamed a “George Floyd law,” which would have required officers to intervene if they witness a colleague using excessive force, was held back earlier in August.

Assemblyman Chris Holden (D–Pasadena), the bill’s author, said in a statement that he still has not received an explanation over why it was not released to the floor.

“There was no reason for this bill to be held, especially since it had enough support from members on the Committee to pass,” he said. “Given the widespread public outcry for police reforms right now, it is a missed opportunity for California to lead on this issue.”

Meanwhile, Sen. Bradford said he wishes Gov. Gavin Newsom would have provided louder support for policing reforms in the final weeks of the session. “That would have been an important signal that this was important to all Californians,” he said.

Looking back at the event on June 9 when he and other state lawmakers knelt in support of George Floyd and other Black people killed by police, Bradford said for some, it was just “the opportunity for a photo op.”

“If you can take a knee for eight minutes and [46] seconds, but you can’t cast a vote on the floor for a bill that will save lives — I’m deeply saddened,” he said.

Bradford waved off the idea that California bills itself a national policy leader and ‘the next coming attraction,’ pointing out that Florida and Georgia have among the most robust police oversight and decertification laws.

“Southern states get it right,” he said, “but a progressive state like California can’t do the real things when it comes to police reform.”