Will Hundreds Of Thousands Of Vote-By-Mail Ballots Go To Californians Who Have Died Or Moved? Election Experts Are Skeptical.

California plans to send all active registered voters a mail-in ballot ahead of the November election, a move the state’s top elections official says is meant to “fortify our democracy in the face of the COVID-19 pandemic.”

“Expanding vote-by-mail statewide is a necessity to protect our right to vote and our public health,” Secretary of State Alex Padilla, a Democrat, said in a June news release. “Voting by mail has worked safely and securely in California for decades.”

While Californians widely support the expansion, the plan is not without its critics. President Trump has repeatedly attacked it with false and misleading claims that it will trigger widespread voter fraud.

Meanwhile, the Election Integrity Project California, a citizens watchdog group, argues the plan will lead to hundreds of thousands of ballots being sent to people who are no longer alive or have moved. The extra ballots could invite fraud, the group says.

“Over 458,000 California registrants who have likely died or moved will be mailed ballots,” EIPCa said in a May press release. “These registrants have not voted or updated their registrations since November 2008 or prior. Though likely deceased or relocated, they remain classified as ‘active’ status. Almost 178,000 have never voted. Almost 2,000 have birth dates indicating they are 105+ years old.”

Conservative news outlets and opinion columns reported on the eye-catching claims this spring and questioned whether the state’s vote-by-mail plans are safe.

With so much riding on mail-in voting, we wanted to know whether California was really going to send hundreds of thousands of ballots to people who should be off the voter rolls.

Election experts, including two county elections officials, told us they strongly doubt so many ballots will go out to dead or moved Californians.

With more than 20 million people on the voter rolls statewide, they acknowledged some ballots are unwittingly sent out before death records or change of address notices are received.

Still, there are measures in place to automatically update voter lists and to safeguard against fraud, elections officials said.

“We are constantly getting outside data sources to help us clean and monitor those voter rolls,” said Sam Mahood, spokesperson for the California Secretary of State’s Office, which oversees the state’s elections.

He said the state’s Employment Development Department also provides national change of address information to check for people who have moved out of state.

“Just like anything else, there will be some variance there, where we will send out ballots to voters that no longer reside where they’re registered,” Nguyen said. “But to ease the concern of the public, we do get those ballots back here in our office.”

She said the ballots include a notice requesting they be mailed back if the registered voter no longer lives there.

Asked about the claim that hundreds of thousands of ballots will go out in error, Yolo County Registrar Jesse Salinas said, “I don’t believe that will be the case.”

“There is ongoing maintenance of voter rolls,” Salinas said. “We do update when people pass away. Sometimes there is a bit of a lag-time. And if that happens, we do encourage people that if they have a loved one who has passed away, to just contact our office.”

Justin Levitt is associate dean for research at Loyola Law School in Los Angeles, where he teaches constitutional law with a focus on election administration.

He said the Election Integrity Project California has made “some valuable contributions” in the past by pointing out possible instances of double registrations or double-voting, including during the March primary. In an April letter, the Secretary of State’s Office confirmed that some of the 48 instances flagged by EIPCa warranted investigation while others could be explained as defects in an election-management system that caused a county to send the state duplicate entries for the same voter.

Levitt said EIPCa has also previously made “some inflated claims,” noting he’s skeptical of its prediction that so many invalid ballots will be mailed ahead of November. The lack of any published methodology on the EIPCa website about how it reached the 458,000 figure also raises flags, he said.

In an interview, Ellen Swensen, chief analyst with Election Integrity Project California, discussed how it arrived at that number.

She said it purchases the voter list for the entire state on a regular basis from the Secretary of State’s office. To make its claim about the 458,000 ballots, it ran queries against March 2020 voter data while comparing it with death records purchased from the state Department of Public Health.

Swensen said EIPCa examined records for people who have not voted or updated their registrations since November 2008 and are still listed as an “active” registration.

In California, people who register to vote remain on the state’s active registration list unless they move and do not re-register somewhere else in the state. In that case, they are placed on an inactive list and are not sent elections materials including ballots.

Voters can return to active status by contacting their county elections office. They can check their registration status, register to vote or pre-register at registertovote.ca.gov.

Prior Lawsuit On Inactive Voters

EIPCa is no stranger to challenging election officials.

It partnered with the conservative group Judicial Watch in 2017 to sue Los Angeles County and the state over charges they failed to meet federal requirements for removing inactive voter registrations.

The sides reached an agreement in January 2019, requiring the county to attempt to contact as many as 1.5 million people in the inactive voter file to determine their status, Judicial Watch said at the time.

Levitt of Loyola Law School says he served as a consultant for election officials on that case.

Six months later, President Trump used the settlement to falsely claim California "admitted" there were "a million" illegal votes in the 2016 presidential election, in an effort to support his widely debunked claim of “serious voter fraud” in the state. The agreement says nothing about voter fraud or illegal voting.

Additionally, it says all parties agreed there was no admission of liability or wrongdoing by the state or county.

‘The System Is Not Working’

Swensen, the EIPCa analyst, said ahead of the November 2020 election her group is most concerned about voters still on the “active list” who may no longer exist.

After analyzing voter and death data, Swensen said she found roughly 6,000 people who had died through 2019 but were still listed as active on the voter rolls.

She says there may be more deceased individuals on the list, but that she was confident in the 6,000 figure, because she had enough data from the two lists that matched, including first, middle and last names; date of birth and place of birth. For these cases, she said the location of the death also matched the address where the person was registered.

She says the vast majority of the 458,000 appear to be people who have moved, adding she did not know the exact figure.

She says the Secretary of State’s office had rejected her group’s request to investigate the 458,000 registrations it claims are no longer valid.

Mahood, the spokesman for that office, said EIPCa wants voters removed from the active rolls based on a lack of activity, but the state can’t do that. He said his office is still reviewing data the group sent it.

Swensen said she does not believe the extra ballots will result in widespread fraud to the point of changing California’s presidential election results. With 4.4 million more registered Democrats than Republicans in the state as of February, and Trump’s unfavorable rating in California, that contest is not in doubt.

Still, she said, “there could be fraudulent activities” that could decide closer races, adding that ballots “could fall into bad hands.

“It’s a very desperate time in our political scene right now,” she said.

Levitt rejected the notion that the integrity of elections was at stake.

“Even if there are some registration records that are not perfectly accurate, that does not mean that they will be used to cast ballots that are counted,” he said. “There are plenty of other safeguards in the process to make sure that individual ballots are not counted if they happen to be cast on behalf of people who have died or moved, including a signature-matching system that is rather vigorous.”

The biggest protection for vote-by-mail ballots in California is this signature-matching requirement. A voter must sign the outside of their ballot’s envelope. That signature is then matched with the voter’s signature on file from when they registered to vote.

Some counties use software to match signatures, while others use elections staff.

Each vote-by-mail ballot also comes with "an identification envelope that is unique to that voter," Kim Alexander, president of the California Voter Foundation, told us last month for PolitiFact California’s Q&A on vote-by-mail.

"It has a barcode on it for that voter. It has the voter’s address and information on it," added Alexander, explaining that voters must use that envelope to return their ballot.

Keith Smith is an associate professor of political science at University of the Pacific in Stockton, where he studies elections. He said in the push-and-pull between greater voting access versus integrity, California lawmakers have gone “heavy on access.”

“We want to make it almost as easy as possible for someone to vote in an election, because we think it’s so important that people have the opportunity to cast a ballot if they want to,” Smith said. “We are willing to endure some error on the integrity side in order to provide significantly more access to the ballot box.”

Even so, Smith says he does not think the vast figures published by the EIPCa “reflect the reality of what will happen in an election.”

The claim by the Election Integrity Project California that hundreds of thousands of ballots will be mailed statewide to voters who have died or moved is striking. Election officials acknowledge that some erroneous ballots will be mailed, given the lag time between a voter moving or dying and the receipt of official notices.

Additionally, they use a statewide voter registration database to prevent duplicate registrations.

Despite claims by President Trump that vote-by-mail leads to “massive voter fraud,” the evidence shows it does not.

Several studies have examined the practice and found an extremely low rate of fraud, including a five-year investigation by the George W. Bush administration that turned up virtually no evidence of any organized effort to skew federal elections.

“Election fraud of all sorts is rare. There is a slightly less rare instance of voter fraud by absentee balloting,” said Charles Stewart, a political science professor at the Massachusetts Institute of Technology and co-director of the Caltech/MIT Voting Technology Project, which analyzes election systems told. “There are greater temptations and opportunities. Nonetheless, they are rare.”

In the end, EIPCa’s claim is a prediction, and its accuracy is difficult to know. What is certain is that election experts reject its suggestion that California’s mail-in ballot system invites fraud and say they’re confident in the safeguards in place. 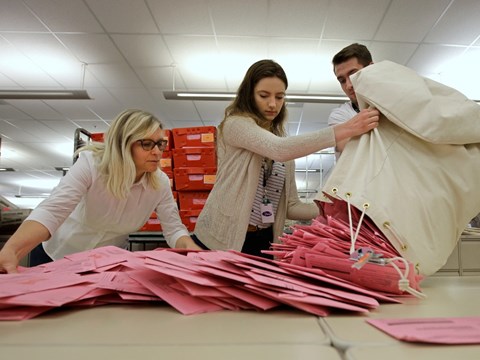