Desmond Campbell, now 32, still gets shaken up when he talks about his interactions with police growing up outside Los Angeles.

It usually happened while driving home from the restaurant where he worked, with the evening’s tips in his pocket.

“A cop would pull me over, see that I had a dirty apron and everything but would still suspect the cash I made as being part of a drug deal … so they end up taking my cash away,” he said. “Here I am, 18 years old and I don’t have anything, and they can get away with this stuff. They would always approach my car with the guns out, guns drawn.”

He says he was pulled over so often, he began putting his hands outside of the window the minute he parked.

It’s a common story among African American men like Campbell — California law enforcement officers are three times more likely to search Black drivers than white drivers. These experiences can put people in a constant state of fear and alertness, which some experts have equated with post-traumatic stress disorder.

Race-based stress can affect mood, appetite, sleep and relationships. It’s been linked to birth complications for African American women, and it may even make Black and brown Californians more susceptible to COVID-19.

As discussions about police violence and systemic racism continue, African American leaders say it’s crucial for people to find a way to safely process both historical and current events and get help when they need it.

“The mental stress that’s on our community has really come to a boiling point,” said DeAngelo Mack, who advocates for better health in communities of color. “We’re at a critical moment of change to begin these conversations through mental health.”

Kristee Haggins, a psychologist who specializes in racial trauma, is trying to address that through Safe Black Space. It’s a Sacramento organization that coordinates monthly healing circles by and for African Americans.

“What we are hearing is a lot of pain, depression, rage, anxiety,” she said. “We’ve got the pandemic and that’s impacting everyone, but the Black community in particular. Then we have these racial issues and discriminatory killings and murders and lynchings that have been happening on top of that. So there’s this intersecting sense of overwhelm … And a need to express all of this.”

Black leaders in Sacramento have been hosting mental health-focused events over the past few weeks, in between racial justice demonstrations.

In some healing spaces, talking about America’s history of racism is a key component to helping people process their pain and anger. On a recent evening in Curtis Park, community activist RoLanda Wilkins gathered a few dozen attendees in a circle. She told the story of white slave-traffickers packing African Americans onto ships.

At many of the racial justice demonstrations in Cesar Chavez Plaza, staff from The Village Advocates, a Sacramento nonprofit focused on mental health and education, set up a tent encouraging people to talk about their worries and needs. 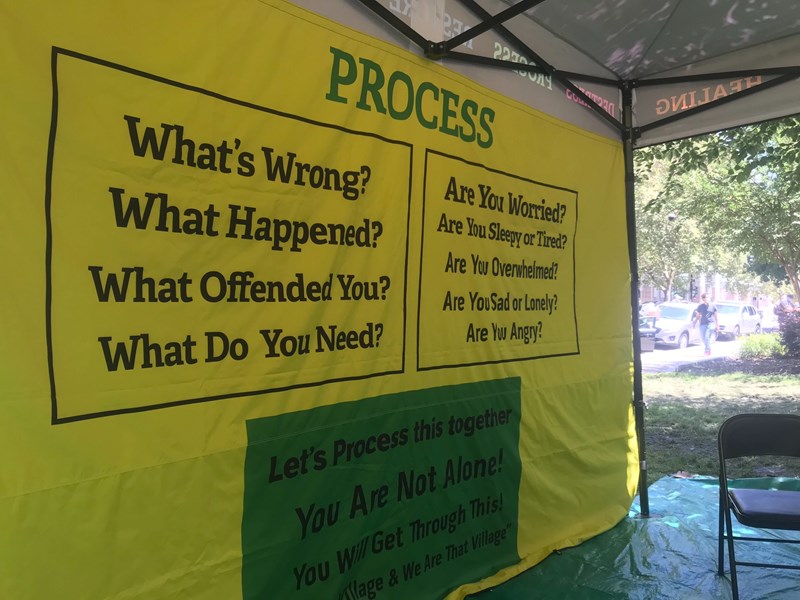 Staff from The Village Advocates, a Sacramento nonprofit focused on mental health and education, set up a tent encouraging people to talk about their worries and needs at a recent demonstration.Sammy Caiola / CapRadio

But advocate Maddysen Taylor says it isn’t always about the tough stuff.

Racial trauma can be difficult to discuss. Mack says many people are hesitant to reach out.

“The stigma around mental health in the Black community is we take care of it in our own house,” he said. “And that does need to change, because being healthy mentally is not a white thing, it’s a people thing.”

Part of the problem is the shortage of Black mental health professionals. Many African Americans say they have an easier time talking to someone who can relate to their experiences.

Elizabeth Harrison, a Solano County social worker who attended one of the protests in Sacramento, said when she first watched the video of Minnesota police killing George Floyd, she froze.

“It’s an immediate numbness,” she said. “I’m not able to process the feelings, I’m not able to go there yet. And after a while, then I’m able to start processing.”

Taylor said she often has to take a break from the news, given how prominent police violence against Black people has been lately.

“I’ve had to censor myself from accessing social media sites, and just taking time for myself to really reflect internally; journaling, meditating, even taking a nap,” she said.

Haggins emphasized the importance of talking things over with a friend or a professional when you need to, while also giving yourself space to block it out once in a while. She calls it “calling in Black.”

But turning off the news doesn’t put a stop to the hostility that Black Sacramentans say they encounter on a regular basis.

“It’s constantly a reminder every single day, when you go down the street, when you walk out your house, go to the store,” said demonstrator Alicia Wilson. “Eyes are always on you for no reason. That does something to one’s psyche. That eats at your soul, when you’ve done nothing but be alive.”

Desmond Campbell says he used to have “a deep fear of ambush.” He would hesitate walking around corners, even when he knew he was in a relatively safe neighborhood.

He says going to therapy has helped him learn to stay calm.

“It’s a matter of me being in a place now where I don’t have to feel like my head is always on a swivel,” he said. “Now I have that sense of feeling ambushed under control. It’s something you have to constantly work with yourself with, that’s part of the trauma.”

Correction: A previous version of this story incorrectly described where Desmond Campbell grew up. He grew up outside Los Angeles.

Find a list of mental health resources for people of color here: