Earlier in the day, the city voted to lift its curfew order and end the National Guard deployment starting midnight Saturday. It comes a day after demonstrators staged a “die-in” in Mayor Darrell Steinberg's neighborhood.

The Sacramento and Davis police departments also each announced they would no longer use the carotid chokehold, after Gov. Gavin Newsom called for local government to end the practice statewide earlier this week.

9:34 p.m.: With curfew off, protests peacefully wind through downtown

A cheer went up Saturday night when a speaker reminded the crowd of demonstrators reassembled at Cesar Chavez Plaza that the city of Sacramento had ended its curfew today after issuing it Monday.

Zuhri Staley was participating in the event and says he didn’t think a curfew was necessary.

"I think they shouldn’t have even been called here in the first place, so it doesn’t even matter," Staley said. "You can’t take bad actions away. I’m saying we’re not initiating a war, we’re telling people, they always had a war on us."

Marches against anti-black racism and police violence moved through downtown past 8 p.m., stopping at the Sacramento County District Attorney's office at the corner of 9th and G streets.

The office has been a focal point for protests since Stephon Clark was shot and killed by Sacramento Police in 2018 and demonstrators called for charges against the officers. Last year D.A. Anne Marie Schubert announced neither would be charged.

Saturday is also the final night of the National Guard in Sacramento, as the city voted to end its deployment as of midnight Saturday. Guard members were seen at the protests.

Crowd with Nat’l Guard at the corner pic.twitter.com/SaVvOE1TAR

After thousands turned up for marches against police brutality in downtown Sacramento Saturday morning, evening protests started with a dance party at Cesar Chavez Plaza.

Here at Cesar Chavez with @sarah_mizes_tan covering the 9th night of demonstrations in Sac.

Tonight was billed as a block party—has that vibe so far  for sure.

I’ll be posting updates in this thread throughout the evening. pic.twitter.com/uPTYeYmDaj

Demonstrators are now preparing to march through downtown Sacramento, gathering at 10th and J streets on their way to the Sacramento County District Attorney's office. Earlier today the City Council voted to end the 8 p.m. curfew that has been in effect since Monday.

Hundreds of protesters on the street pic.twitter.com/WWmbr0cnwX

5 p.m.: Sacramento Police to end use of carotid chokehold

The Sacramento Police Department announced Saturday it will suspend the use of the carotid chokehold, after Gov. Gavin Newsom called for local government to end the practice statewide earlier this week.

The carotid restraint, also known as a “sleeper hold,” can block the flow of blood to the brain and lead to loss of consciousness or death.

In the wake of George Floyd’s killing by Minnesota police, law enforcement agencies across the nation have abandoned the hold, including the San Diego police and sheriff’s departments.

This week, Sacramento Mayor Darrell Steinberg called for a review of the city’s police use of the technique, according to the Sacramento Bee.

The Davis Police Department also announced Saturday it would ban the use of the carotid hold.

City Council has voted to lift Sacramento’s emergency curfew that was put in place Monday. The deployment of the National Guard will also end at midnight tonight.

“We do not want to keep a curfew in place or the guard on our streets a minute longer than necessary,” said Mayor Darrell Steinberg. “The peaceful and powerful demonstrations of the past five days have given me confidence that these measures, which we imposed reluctantly, are no longer needed.”

The curfew was lifted a day after peaceful demonstrations went to the mayor’s neighborhood and staged a “die-in” which was attended by hundreds of people on Friday. 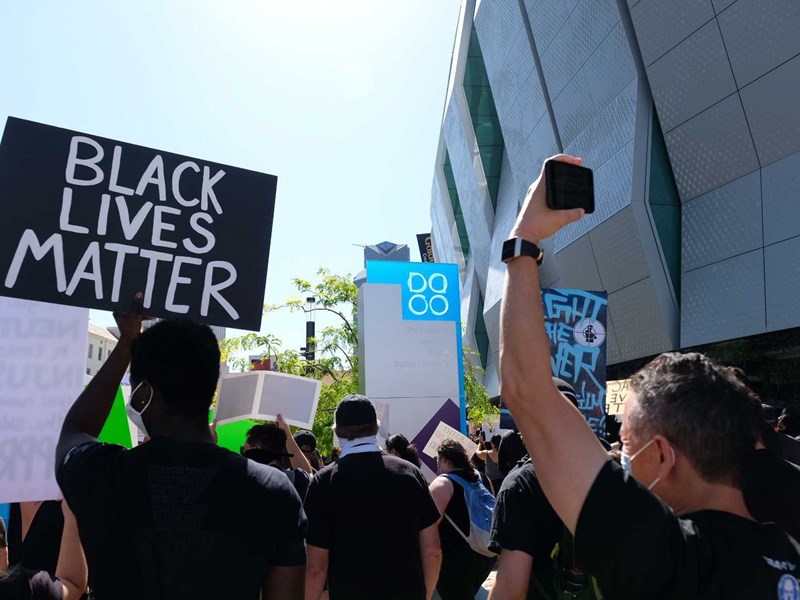 Crowds demanding justice for George Floyd and others killed under the hands of police, gathering near Golden 1 Center in downtown Sacramento.Andrew Nixon / CapRadio

Bobbie Wooten with Feed Sacramento Homeless and Julian Shorter with I Am Sac Foundation, a new grassroots organization, were just two of the crowd of people at Cesar Chavez Plaza looking to drive change.

Shorter said he is working with Stevante Clark on the fledgling community organization.

“Basically, we have a bunch of programs that will help change the city,” including youth programs, a de-escalation team, and efforts to defund the police, he said. “It’s only about a week old, so we’re kind of in the beginning stages. But as we’re here right now protesting, we have a whole team at an office planning everything, too.”

Shorter grew up in Sacramento but now lives in New York City. He returned about a month ago to escape the pandemic.

“I might even move back [to Sacramento] because I love what’s going on and I don’t want it to stop,” he said.

Bobbie Wooten w/ @FeedSacHomeless came out with the her kids and her white friends who reached out about how to be better allies: “It’s not about this or that specific policy [change], it’s just about equality.” pic.twitter.com/A8ovwaEZtd

“My children were highly affected by the death of George [Floyd] and Breonna [Taylor],” Bobbie Wooten said. “I was so proud that they believed in something so strong that they wanted to come out and march.”

Wooten said her white friends had been reaching out and asking how to help, so she brought them to the march.

“This is about unity, it’s about equality and it’s about holding those that are committing murder accountable for their actions,” she said. “We want to stop the racism.”

Julian Shorter says he’s working with Stevante Clark on a new grassroots organization, I Am Sac Foundation. They want to get people + youth politically active to bring about substantive change, including defunding police. pic.twitter.com/KTHw36p6is

And there is an after party. pic.twitter.com/rLCXORMqeX

Ashley Draper held a double-sided sign with QR codes. One leads to an online petition against Sacramento County District Attorney Anne Marie Schubert, who last year declined to charge Sacramento police officers in the shooting death of Stephon Clark in his grandmother’s backyard.

The other leads to a survey about defunding police.

“I want to do a temperature check. I’m trying to gather data on how many people actually are for defunding police,” Draper said.

The 31-year-old Elk Grove resident said the past week has been “really heavy,” but has spurred her to action beyond just attending demonstrations.

“Instead of just yelling, I want to channel our energy into actually doing something, so we can do both at the same time,” she said.

Thousands of people marched against police brutality and racism, starting at the Golden 1 Center in downtown Sacramento, then heading east toward City Hall, and gathering for demonstrations at Cesar Chavez Plaza.

Speakers at the plaza called for nationwide police reforms, including the end of carotid chokeholds by Sacramento police. Gov. Gavin Newsom called for local government to end the practice statewide earlier this week.

March stopped at Cesar Chavez, but there are so many people that it’s backed up at 10th & J pic.twitter.com/GW4I8cUiUr

The Sacramento City Council will meet at 1 p.m. today to vote on ending the city's curfew and removing National Guard troops, according to a statement by Mayor Darrell Steinberg, as protests continued in downtown Sacramento Saturday.

"I will recommend the curfew be lifted immediately and the National Guard no longer be deployed," Steinberg wrote in a tweet. "Last night’s peaceful and powerful demonstrations give me confidence that these reluctant steps are no longer necessary."

Yesterday demonstrators gathered near Steinberg's home in the continued protests and against racism and police brutality. Sacramento Police reported no arrests or vandalism from Friday's protest.

Protests began early Saturday, with huge crowds meeting at the Golden 1 Center for a planned march around 10 a.m. Demonstrators plan to move through downtown Sacramento.

Crowd is snaking through downtown, not approaching the Capitol directly. Gives you a sense of how large the group is. pic.twitter.com/Ca5nqdywvR