The demonstration against police brutality in Sacramento left downtown on Friday evening — and visited the neighborhood of Mayor Darrell Steinberg.

The local chapter of Black Lives Matter organized a "Sit In/Die In" event in Greenhaven just after 6 p.m., and just blocks from Steinberg's home.

Hard to get a sense of the crowd here on foot, but there is huge turnout, people filling Greenhaven Dr for four solid blocks pic.twitter.com/cgU9T7yf0O

Demonstrators laid down in the middle of the road near Greenhaven and Greenstar while others raised a BLM flag or gave away cupcakes to celebrate what would have been Breonna Taylor's 27th birthday. The crowd extended down Greenhaven Drive for at least four blocks, disrupting traffic along Florin Road.

Organizers of the protest did not challenge the city's curfew, however, and wrapped up the gathering a half-hour before 8 p.m. Sacramento police said there were no arrests and no reports of vandalism or theft.

Several demonstrations are planned for Friday night in Sacramento, the ninth night in a row people have turned out in the city to protest police brutality.

CapRadio journalists Scott Rodd, Sarah-Mizes Tan and Andrew Nixon are reporting from the events, beginning with one being held in Cesar Chavez Plaza.

Out here with an all-star @CapRadioNews crew covering tonight’s #GeorgeFloyd protests in Sacramento.

A handful of different demonstrations are planned tonight, I’ll be tweeting here with the latest developments. https://t.co/toUTcT7oK1

Contingent of Muslims for Black Lives out here today with the Tarbiya Institute. Manaza Rashid says she and her daughter came out bc they know there are black Muslims and they also know what it feels like to be racially targeted so they wanted to show support. pic.twitter.com/YthrZKmtjo

On Friday evening, ahead of several planned demonstrations throughout the city, volunteers gathered at the Capitol to prepare the lawns for painting. 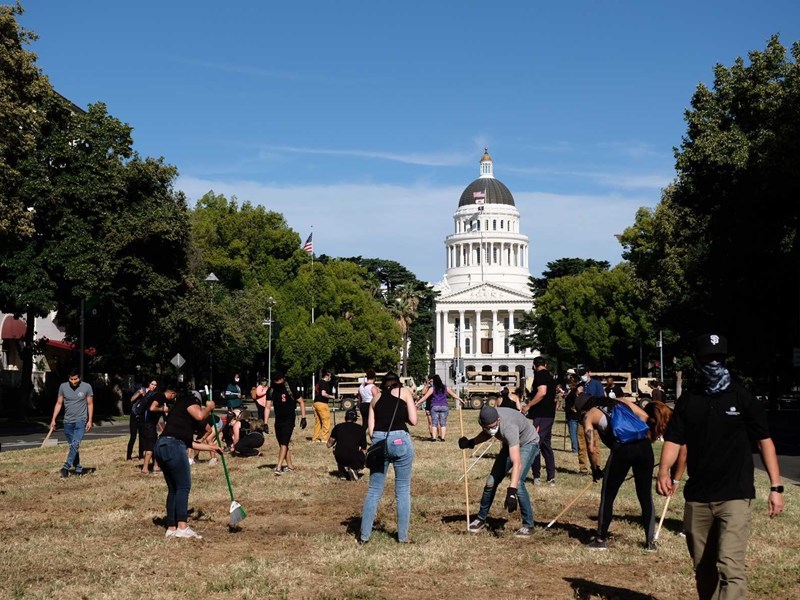 Washington said they’d be painting the words across three large lawns “to make sure they hear it, they see it, they feel it.”

The city of West Sacramento has lifted its curfew order, effective immediately.

There will be no curfew in West Sacramento Friday night, or this weekend. The city originally suspended its curfew Wednesday and Thursday night after protests remained largely peaceful.

Downtown businesses have not reported any instances of vandalism or theft.

Most demonstrators stayed out on the streets until about 9 p.m.