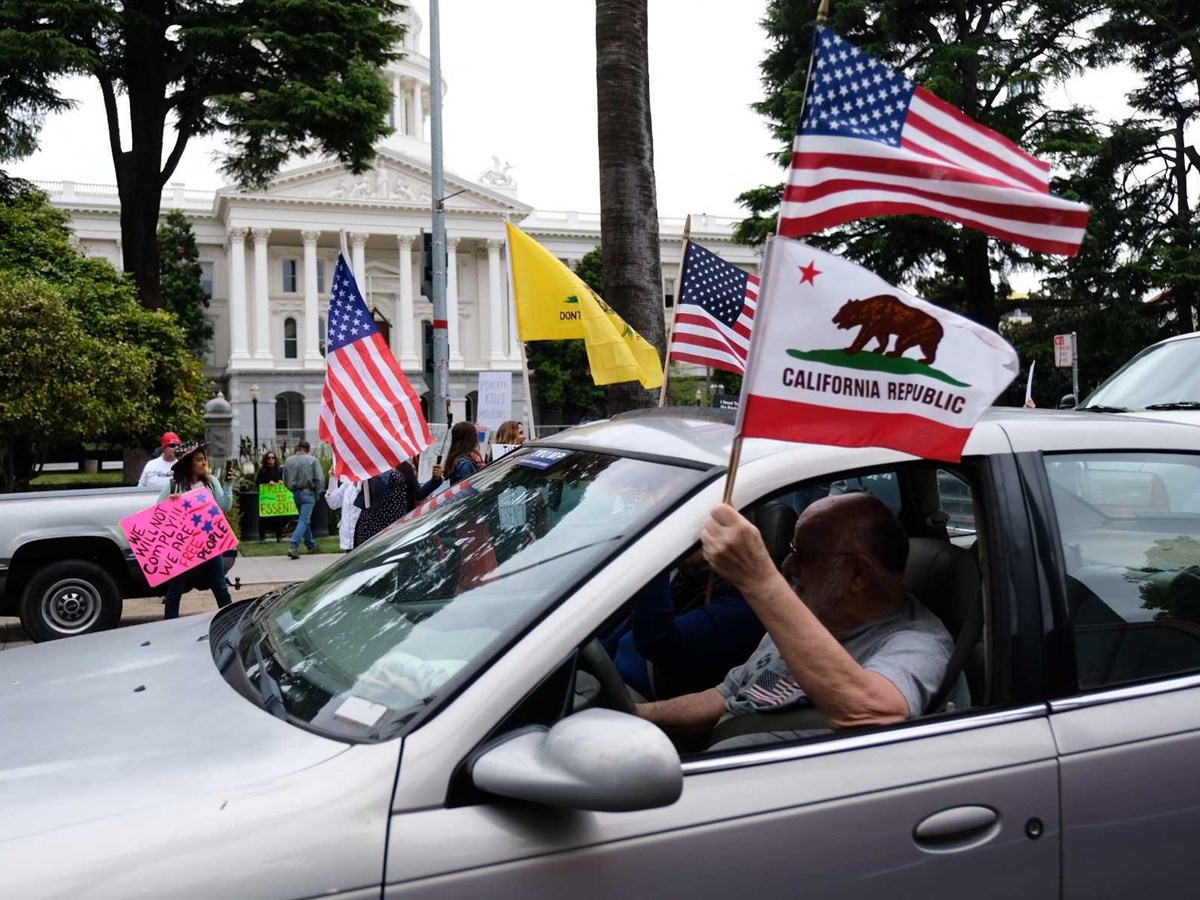 Most people did not wear masks or face coverings and many moved around in close proximity, often huddling in groups and not observing the state’s guidelines to keep at least six-feet away from others. 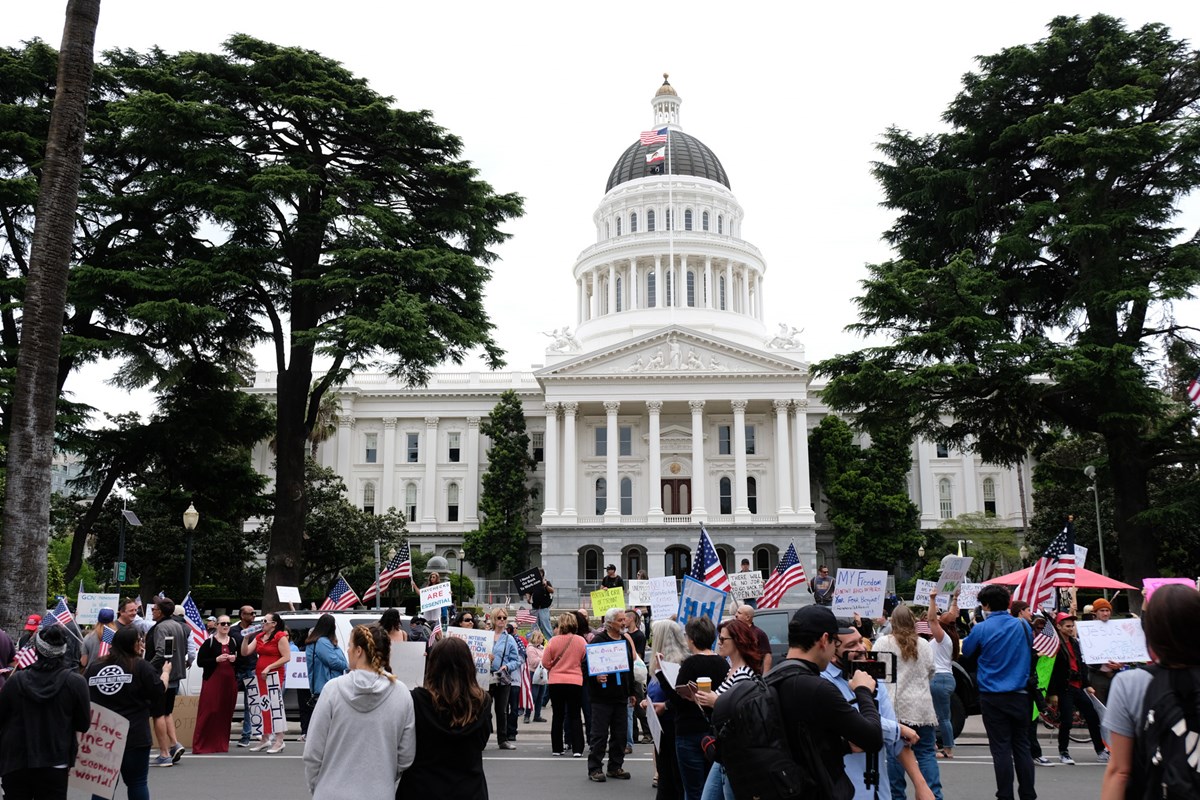 Demonstrators filled the sidewalk and part of 10th Street in Sacramento during the "Operation Gridlock" stay-at-home protest at the Capitol Monday, April 20, 2020. Andrew Nixon / CapRadio

Many were deeply skeptical of public health officials and government leaders. “I work in the emergency room, an empty emergency room right now, and this is a scam, this is a way to take our freedoms back one at a time,” said Chico-resident Doreen Denlay of the stay-home order.

There is no evidence that government and public health officials are misreporting COVID-19 cases or deaths.

As of Monday, 1,203 Californians had died from the virus, with at least 33,000 testing positive — although the state lacks sufficient testing to know how many residents could be infected. A study released Monday estimated Los Angeles County alone could have more than 220,000 cases.

As of Monday, Sacramento County had 940 positive cases and 34 deaths. But county Public Health Director Dr. Peter Beilenson said the true number of cases could be “10 times that.”

“It’s hard to make a really good estimate because we simply have not been testing virtually any asymptomatic patients and a large number of the folks with this virus are clearly asymptomatic,” he said Monday on Insight with Beth Ruyak.

The gathering, which eventually convened at the west steps just before 1 p.m. but overtook several areas in Capitol Park, was approved by the California Highway Patrol for 500 attendees. Called “Operation Gridlock,” the online permit describes it as a “peaceful gathering to protest Governor Newsom’s state shutdown due to CoronaVirus.” 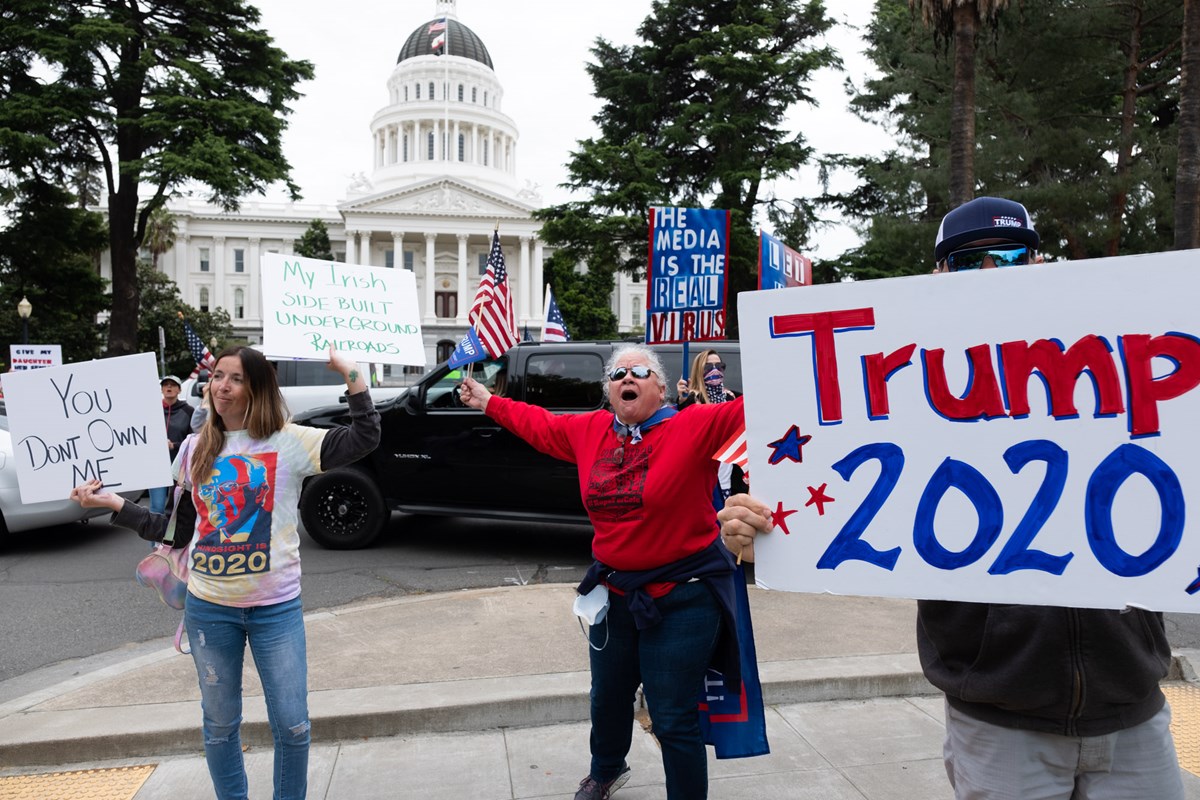 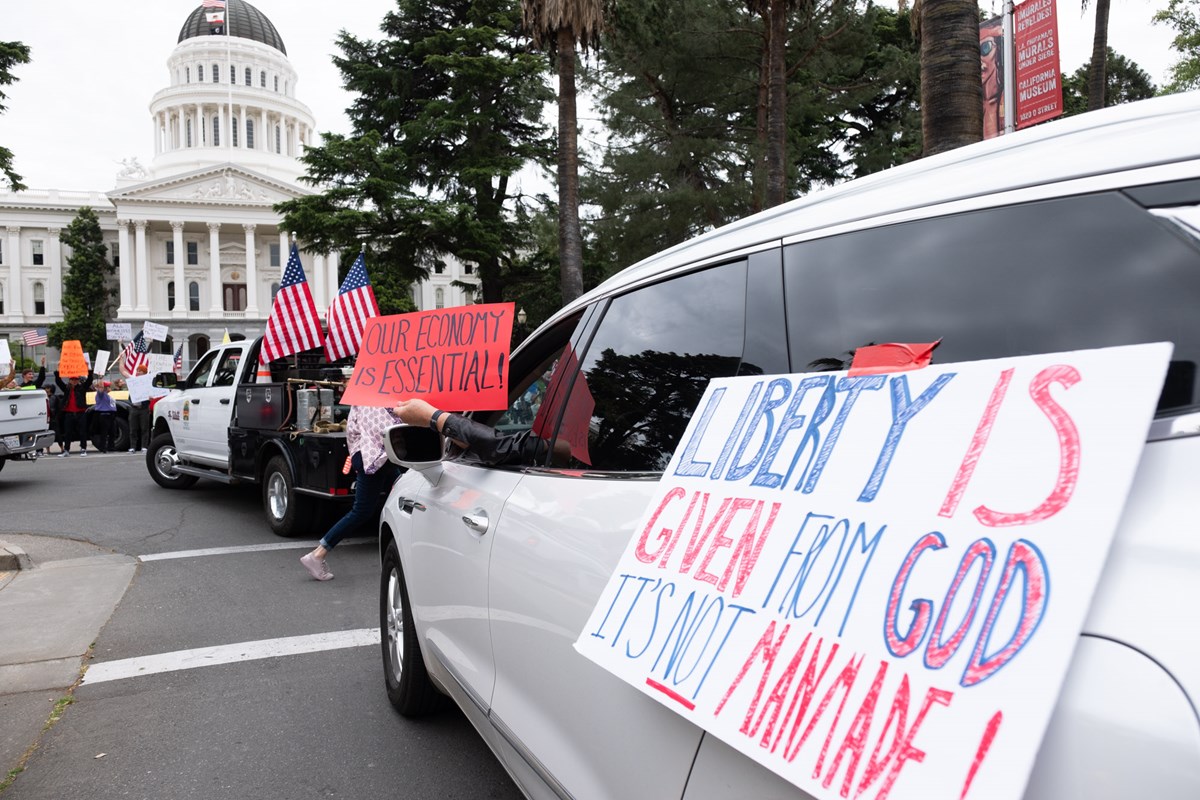 Cars posted signs while driving around the Capitol in Monday, April 20, 2020 in Sacramento. Andrew Nixon / CapRadio

Jill Young came to the demonstration from Galt, where she said the governor’s orders have destroyed the local economy.

“In my little town, there’s a lot of businesses that are closed right now, people are losing their businesses and closing. It’s sad,” Young said.

Tom Orr, who owns a construction company in Rancho Cordova, says he laid off 60% of his workforce since the outbreak began.

“We need to reopen the state and stop this craziness and let people get back to work before the economy completely tanks,” he said.

Orr claimed that the government and health officials were “inflating the deaths” due to the pandemic. “The numbers don’t justify the shutdown,” he said, then asked: “Do you know anybody who’s died from the coronavirus?” 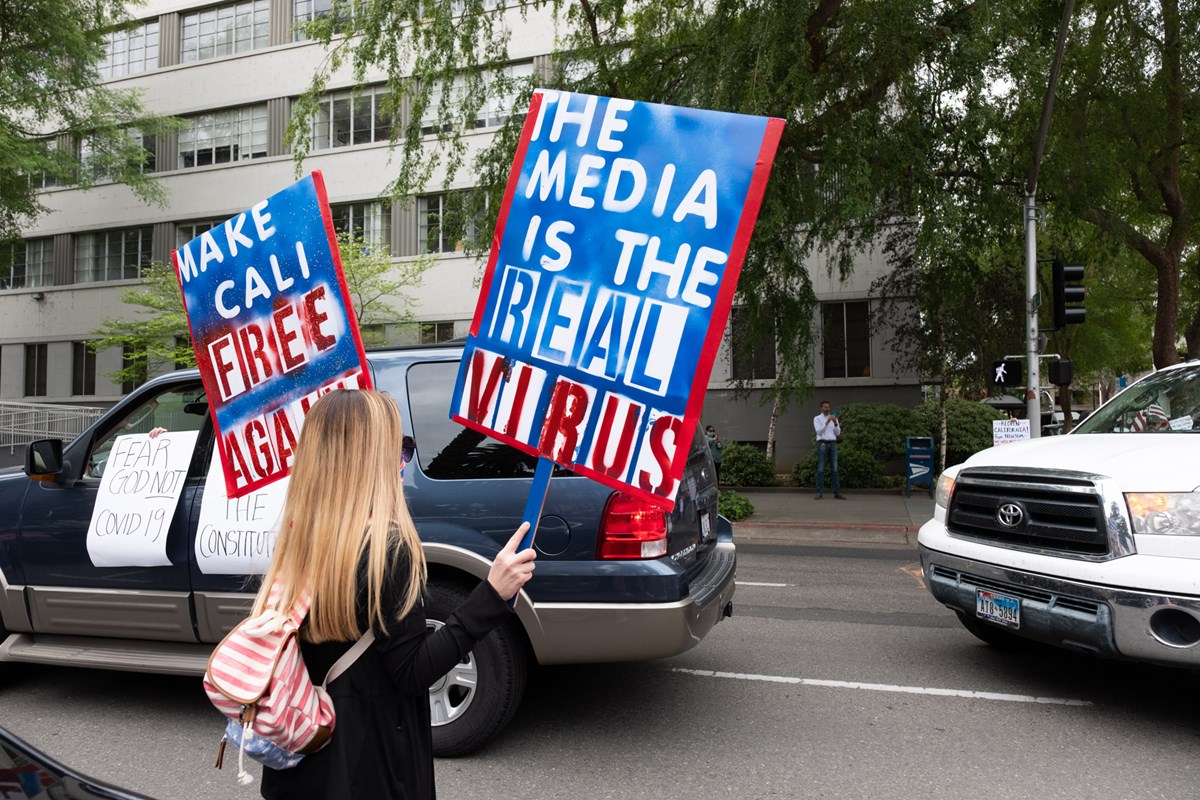 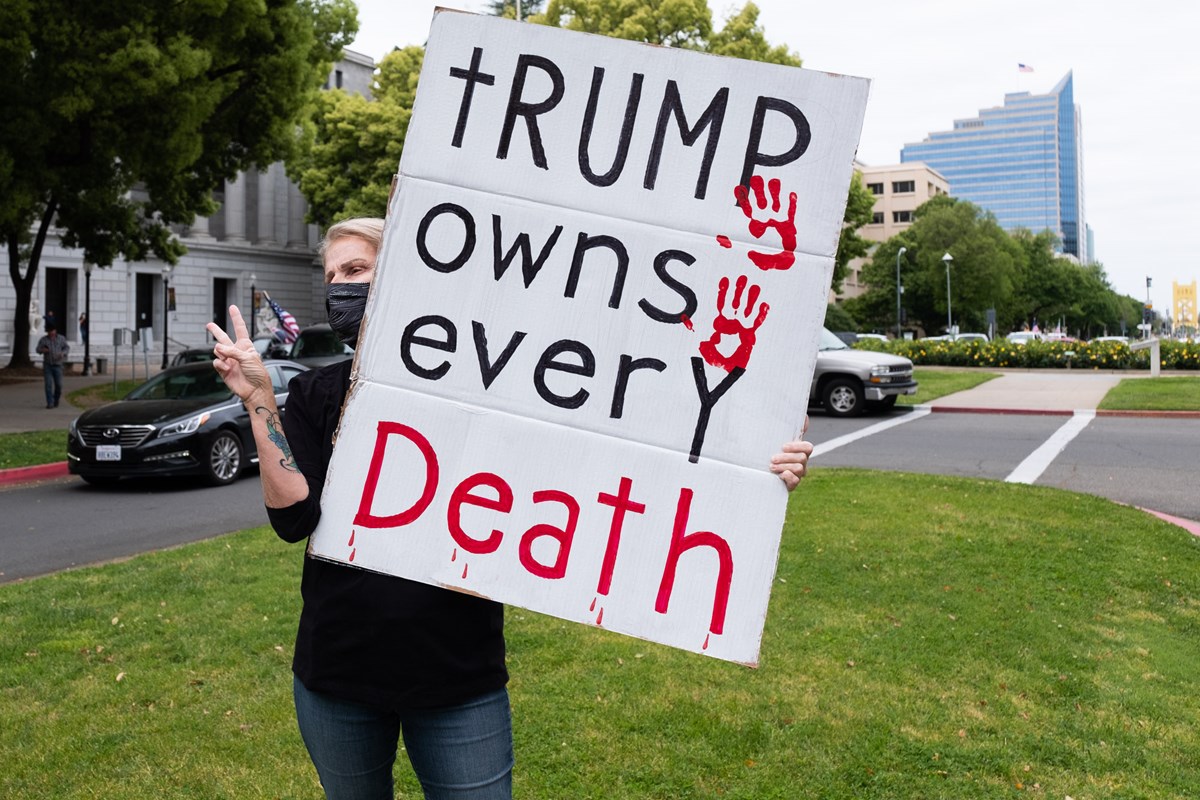 There was a one counter protester to "Operation Gridlock" at state Capitol Monday, April 20, 2020 in Sacramento. Andrew Nixon / CapRadio

The event permit states it was organized by the Freedom Angels, whose members describe themselves as “Patriot Mothers who won’t back down.” The same group has also protested against the state’s law making it harder to obtain a medical exemption for vaccinations for students.

Similar gatherings across the country in the past week have drawn conservatives, militia groups, supporters of President Trump and workers and business owners who have lost their livelihoods due to the pandemic.

A spokesperson with Sacramento County urged the demonstrators to exercise their right to free speech safely.

“We know that these are unprecedented times and that there is a lot of anxiety surrounding the stay at home orders,” Janna Haynes wrote in a statement, “but we cannot stress enough how important it is to continue social distancing until we feel we are at a place where the public health data guides us to move forward with loosening restrictions and reopening businesses.”

During the protest, a California Highway Patrol spokesperson told CapRadio they would not be making arrests or issuing citations at the event despite demonstrators violating the stay-at-home order.

Officer Rick Turner said there were no arrests or citations on Monday even though attendees did not practice social distancing.

"In this case, the permit was issue with the understanding that the protest would be conducted in a manner consistent with the state's public health guidelines," Turner said. "That's not what occurred today."

The officer said CHP will evaluate issuing permits going forward on a case-by-case basis for all groups.

Leslie Jacobs, a constitutional law professor at the Pacific McGeorge School of Law in Sacramento, says law enforcement can legally enforce the stay-home order even at a free speech event.

She added demonstrators concerned with infringement of their freedoms need to take into account the reasons for the current restrictions.

“They’re allowed to do this, but not in violation of the orders the government has issued,” Jacobs said.

When it comes to free speech rights, she said a point of concern would be if the government was singling out a particular group. Jacobs referenced a smallpox outbreak in San Francisco during the early 1900s, in which the city’s Chinatown was quarantined because officials believed Chinese people could spread the disease. That was not constitutional, she said.

This story has been updated with comment from a CHP spokesperson.