The Rent Is Due. But Some Tenants Who Lost Their Jobs Say They’re Not Paying.

Just a few weeks ago, Uma Tufekcic was hustling two jobs: at a restaurant and an art gallery in Sacramento. Then, like millions across the globe, the coronavirus crisis yanked the rug out from under her.

Now, she has no income. She isolates at home every day with her kitten, Iris, and occasionally paints or sneaks out for a walk in the park.

But on Wednesday, it’s time to pay her landlord: $900 for her Midtown studio apartment.

“I have rent due on the first like everybody else,” Tufekcic said. “And I need to be saving my little bit of savings for buying food, survival things.” 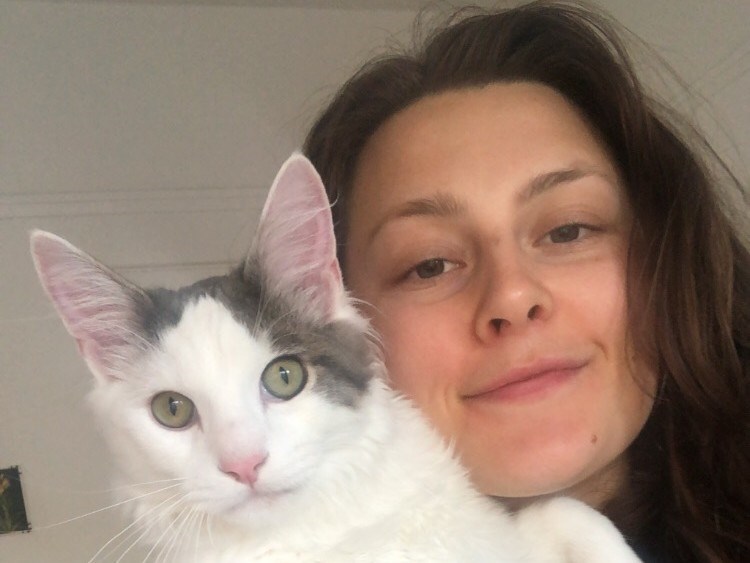 Uma Tufekcic took a selfie with her kitten in Midtown Sacramento while following the stay-at-home order. “I truly believe that if enough people participate in a rent strike or demand a rent moratorium or a rent freeze, it'll happen,” she said.Courtesy of Uma TufekcicShe has a plan.

She and other tenants are calling this decision a “rent strike,” something residents across the country are considering as the rent comes due in this coronavirus era.

Even though nearly three-fourths of the United States is under stay-at-home orders, these renters say they won’t be paying for their rentals in April — and they don’t plan to pay this month's rent later, even if or when their jobs hopefully return.

This burgeoning movement comes on the heels of Gov. Gavin Newsom’s announcement last week of what his office called a statewide moratorium on evictions.

The governor’s order allows tenants to delay some or all rent payments if they are impacted by the COVID-19 crisis — such as losing work, falling ill or taking care of a family member who is sick — but does not offer guidelines or a timeline for remuneration.

But they are required to let their landlord know in writing within a week of the missed payment and documentation proving hardship.

Dozens of local governments in California have passed similar renter-relief laws. On March 24, the city of Sacramento approved its emergency ordinance, which stops property owners from evicting residential tenants but requires renters to pay overdue rent back to landlords within 120 days of lifting the emergency.

Advocates for property owners and landlords have come out in support of Newsom's order.

“We realize the governor is working to thread the needle when it comes to landlords and tenants,” said Tom Bannon with the California Apartment Association.

He says it’s a delicate balance: “Tenants are very fearful of losing their homes, while at the same time landlords are fearful over the ability to pay the bills, including mortgages and taxes.”

Tenants are very fearful of losing their homes, while at the same time landlords are fearful over the ability to pay the bills, including mortgages and taxes.

Some renters and their supporters say Newsom’s order and the local ordinances don’t offer any meaningful relief.

Ibraheem Bangura is a renter in Elk Grove and an organizer with the Alliance of Californians for Community Empowerment, an organization that works with low income communities on issues like economic justice.

When it comes to Newsom’s order, he said he’s “extremely disappointed.”

What he wants “is pretty simple,” he says: “In this time when people are losing employment, when we’re being told that we have to stay home, we need a cancellation on rent and mortgage and utilities payments until we are back to work.” 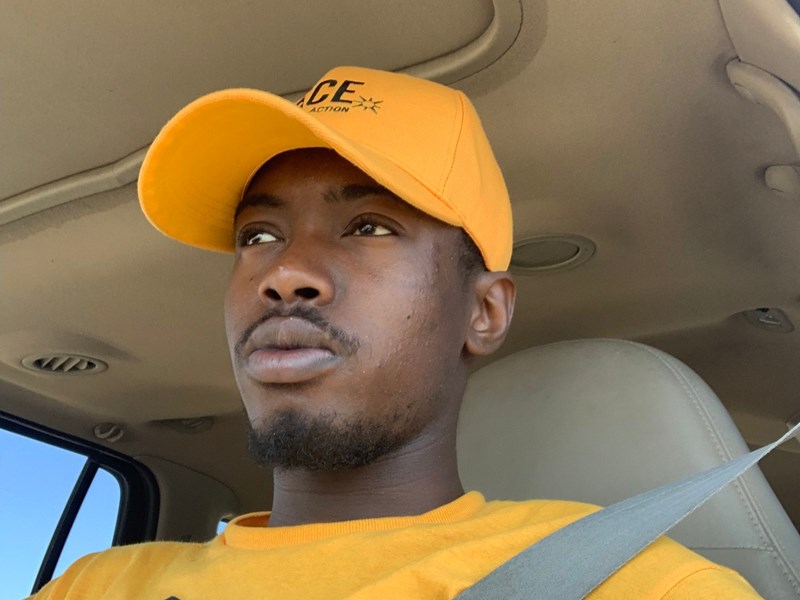 Ibraheem Bangura is an organizer with Alliance of Californians for Community Empowerment. He says emergency renter protection ordinances, including Gov. Gavin Newsom’s executive order, to not meet “the gravity of the moment.”Photo Courtesy of Ibraheem Buranga

Tufekcic hopes that, if enough people participate in a rent strike or demand a rent moratorium or a rent freeze, “it'll happen.”

“I feel like every time I’m on the phone, it’s always about ‘rent strike’ nowadays,” she said. “I do not have any fear. But I do feel excited, and I feel empowered, and I feel pretty positive.”

The California Apartment Association, which in the past has opposed nearly all forms of “rent control” — spending hundreds of thousands of dollars to challenge such rules up and down the state — has embraced the spree of renter protection laws passed in March.

“[We’re] still reviewing the details and implications of the governor's new executive order,” Bannon with CAA said, “but as a general rule, we think that the governor has done a good job of putting together a reasonable response to the eviction issue.”

The group is telling its members, which includes “mom and pop” landlords and major corporate property owners with tens of thousands of units in their portfolios, to work with tenants to set up “reasonable repayment plans” if they can’t cover the rent in April or beyond.

A major concern about canceling or forgiving the rent, as per the rent strikers’ demand, is the domino effect on landlords.

“A lot of landlords are going to have a hard time not getting rent payments. But we're also advising that that local governments take into account the difficulties that a lot of the small property owners, for that matter large property owners, also are going to have in making mortgage payments, paying their gardeners, paying the trash … the water bills, the taxes,” Bannon said.

He’s telling CAA members to talk with renters about the situation, and the group has a sample letter it says property owners can use to talk about the COVID-19 crisis.

Leah Simon-Weisberg, legal director for the Alliance of Californians for Community Empowerment and an elected member of the city of Berkeley’s rent stabilization board, might argue that a sample letter falls far short.

“I think that what California needs is for very clear order, from the governor, that just simply says you cannot evict anybody for really any purpose except, you know, imminent danger. And that people will not be evicted for not being able to pay rent that has accrued during the stay at home,” she said.

Simon-Weisberg says it “boggles the mind” that Newsom and other elected officials view the latest emergency directives as something that is helpful during this moment.

Part of the problem, according to Simon-Weisberg, is there are a “patchwork” of different ordinances for cities and counties — the governor’s executive order does not supersede local rules — instead of a top-down approach.

The city of Oakland, for instance, prohibits landlords from evicting tenants later this year if they cannot afford back-rent, but the city of Los Angeles would require renters to defend themselves against these types of evictions in court.

“I think that, at minimum, it needs to not be debt that they can be evicted over,” Simon-Weisberg said of how the state should deal with the crisis. “And I think that the governor needs to find a way for people to receive support so they can pay their rent.”

She said that, as of last week, she was still seeing tenants served eviction paperwork and seeking counsel from housing-rights organizations.

Substitute teacher Ryan Sharp might have to make some of those tough choices.

Up until last month, he taught at the East Sacramento elementary school where a fellow teacher died from COVID-19, one of the first cases in the county. The Sacramento City Unified School District, and pretty much all schools in California, have now been closed for weeks.

He and his housemates are self-isolating, and he hasn’t worked since March 9. He has an unemployment interview soon, but isn’t hopeful, given that the state has been overwhelmed by millions seeking benefits.

“I have no real prospect of getting any money for the next several months. I'm thinking about how this could go on for six months, seven months — who knows how long,” Sharp said. “It is completely absurd that tenants all across the country are still expected to pay their normal rent payments as if nothing has changed.”

There are people that are basically walking the tightrope between getting infected or getting evicted.

And if the stay-home orders from government continue into the summer, he suggests there are more significant consequences for months of back-rent than just eviction.

“For most people in this position as a tenant, the idea of paying double-rent for four months is completely untenable — and for some it could mean life or death,” Sharp said.

He is advocating for an unconditional rent freeze.

“There are people that are basically walking the tightrope between getting infected or getting evicted,” Sharp said.

So far, tenants say they’re on that rope without a net. 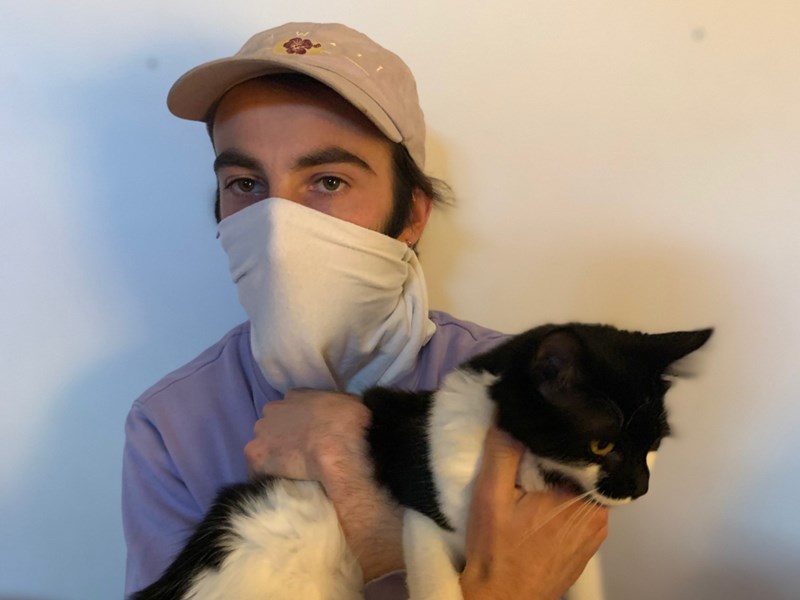 A substitute teacher, Ryan Sharp took a selfie with his cat while self-isolating. He worries he will not have income for months.Courtesy of Ryan Sharp