California native bumble bees are poised to become protected under the state’s Endangered Species Act — and they’d be the first insects on the list.

The populations of four bee species — the Crotch, Franklin’s, Suckley cuckoo and Western bumble bees — have declined significantly, and the Franklin’s bee is difficult to find, said Kim Delfino, California program director for Defenders of Wildlife. She blames habitat loss, pesticide use and disease.

“Little critters like bees are critical to our food supply and should merit protection just as much as something charismatic as a salmon or kit fox or wolf or sea otter,” Delfino said.

Last June, the California Fish and Game Commission decided to list the bees as candidates to be endangered species, writing that there was a “substantial possibility” that the bees would end up protected by the act. Their candidacy provides temporary protection.

But many agricultural interests are upset over the listing, and are suing to stop the insects from joining the more than 250 species protected by the act.

“I would say citrus growers would no longer allow any beekeepers to store bees on their property,” Creamer said. “You can’t take the risk of killing one if it’s an endangered species. I think it’s a very dangerous precedent if we start listing insects.”

Making A Case For Bees

It’s unclear whether the California Fish and Game Commission has the authority to list insects.

Groups like the Xerces Society for Invertebrate Conservation, Defenders of Wildlife and the Center for Food Safety say that California Fish and Game code includes invertebrates under the definition of fish. While it may seem odd to include insects under fish, insects are “unquestionably” invertebrates, according to a petition by one of the groups.

Bumble bees are an integral part of California’s ecosystems, but the groups say populations have declined for decades because of land use changes, pesticide overuse and diseases spread by commercial bees.

On the federal level, a couple dozen insects are already listed on the endangered species list, like the rusty patched bumblebee, which joined in 2017 — it was the first designation for a bumblebee and bee species in the continental United States. Seven species of bees were federally listed in Hawaii in 2016. 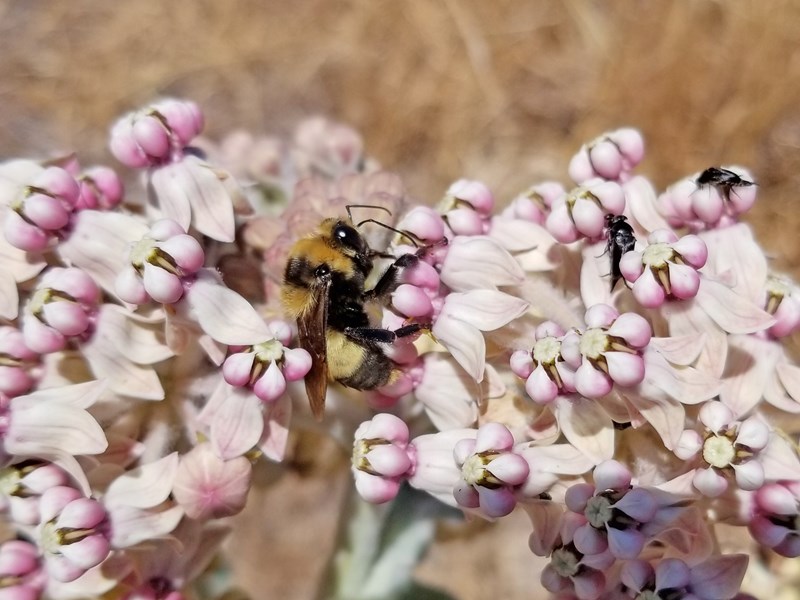 A United Nation’s report from 2019 found more than 40% of invertebrate pollinators, like bees and butterflies, and 10% of all insects are at risk of extinction.

Deflino says the disappearance of bees can have a direct impact on our food supply.

“People should care about whether or not pollinators and insects become endangered, because they are the very links to how our food is grown,” Delfino said. “You don’t eat a peach, corn or salad without pollinators.”

The petition to include the bees on California’s list suggests climate change poses a “significant threat” and increases “the likelihood of rapid population declines” due to reduced genetic diversity.

Research cited in the petition states that climate change will decrease the availability of nesting habitat and can interrupt the relationship between bees and the plants they rely on for food.

The changing climate has already altered some bumble bees by “reducing their tongue length in response to the changed availability of food,” according to the petition, whose authors say this could create competition with other species.

“These little guys have reduced in population size so much that they are now highly threatened with extinction, and that’s a good warning signal,” said Steven Beissinger, a UC Berkeley professor of environmental science, policy and management. “If the bees are telling us this, then there’s probably some significant problems.”

Beissinger points to declines also seen among monarch butterflies, which were at about 29,000 in the latest count, a number the Xerces Society says is less than 1% of their population in the 1980s.

Neal Williams, who studies bees at UC Davis, says he wishes it hadn’t got to the point where bumble bees need to be listed as endangered because it signals the species are in such an imperiled state. His concern is it could be tough to recover some of the species.

"There are certainly other bumble bee species within California whose numbers show strong evidence of decline, too,” Williams said. “These species are showing evidence of what may be happening more widely of other species, as well.”

Agricultural groups that represent farmers growing crops like almonds, cotton and oranges are suing to keep the bees off the list.

They argue the California Endangered Species Act does not help insects and that the commission should not move forward with protections.

Specifically, they say putting bees on the list will greatly impact agriculture. They argue that bumble bee advocates and scientists deliberately made the bee’s homerange as the entire state.

“So, essentially, farmers just everywhere have to just act as if those bees are around and make sure they are not taking [killing] them,” said Noelle Cremers, a senior policy advocate for the California Farm Bureau Federation.

A map of specimen collections and photo-confirmed observations of four types of bumble bees in North America between 1877 and 2019. Data provided by Leif Richardson. More information on this data here. Map created by Emily Zentner / CapRadio

She says listing the bees would mean farmers and growers will have to reduce grazing and the use of pesticides and herbicides. It could also limit where honeybee hives can be placed.

Cremers also says the idea of an insect becoming listed as endangered in California was already dealt with in the ’80s: The commission took action to list two species of butterfly, but the Office of Administrative Law rejected it. And then again in 1998, when then-Attorney General Dan Lungren wrote an opinion that endangered status should be limited “to birds, mammals, fish, amphibians, reptiles, and plants. Insects do not fall within any of these categories.”

Instead of listing the bees, Cremers says the best way to address conservation is to work with farmers to figure out voluntary solutions like planting bee habitat on farms.

“If you start calling insects endangered species, how do you track them?” Creamer said. “How do you know when you’ve killed one? Do you stop everything because there is an insect in your field?”

He says listing the species would confuse farmers and difficult to comply with in the fields.

In response to the lawsuit, bee advocates filed a motion to defend the Fish and Game Commission’s evaluation of the four bumblebee species.

The California Department of Wildlife determined that it has “the authority to list” the bees as endangered, according to its deputy director of communications, education and outreach Jordan Traverso.

She also says the possibility of a bee getting on the list is unprecedented and introduces a lot of questions.

She compared a bee to a wolf: If you list a wolf, the management plan is clear — there are only so many in the state, so just don’t kill them. But it’s more difficult for bees, because you can’t keep tabs on millions of insects.

“The unintended consequence of taking bees — like stepping on one or hitting one while driving — is so different than killing wolves,” Traverso said. “To think about moving forward on this with insects is pretty difficult to grasp.”

She says a decision from the commission could take place as soon as August, but that the lawsuit complicates the process. For instance, she’s unsure what would happen if the commission approves bees, but then a judge rules they aren’t eligible.

Meanwhile, it remains a struggle to track and manage the more than 250 species already on California’s endangered species list.

“The list has always fit for large mammals and ... to think insects are going to be part of this process is pretty difficult to grasp,” Traverso said.

Correction: We’ve updated this story to clarify comments by UC Davis bee expert Neal Williams. He said he wishes it hadn’t got to the point that these bumble bee species need to be listed as endangered species.

A previous version of this story misspelled Casey Creamer's name. It has been updated.