The Sacramento River levee system separates the Pocket neighborhood — bordered by the river on the north, west and south — from the water.Ezra David Romero / CapRadio

Three years ago, water began seeping out of yards and pooling in roadways in the Sacramento Pocket neighborhood.

But the water wasn’t from a recent storm.

“It hadn’t rained for a couple of weeks,” said Rick Johnson, executive director of the Sacramento Area Flood Control Agency. “This is water coming up through and under the levees into people’s yards. What’s scary about it is that the homes are right there.”

The Pocket is a neighborhood of around 30,000 people about 10 miles south of downtown, bordered by the Sacramento River on the north, west and south. Standing at a point along the levee, you can see on one side a gated community of one and two story homes and on the left the noticeably higher river. Year-round maintenance and future work are planned in order to protect them, but they’re still at risk.

“The Pocket is somewhere you can see what challenges we have in Sacramento … if it would flood certain areas like this would have a big impact,” said Lon Peterson, the city of Sacramento’s public information officer for the Department of Utilities.

Weak and problematic levees are a big reason why there was so much destruction when Hurricane Katrina hit New Orleans in 2005. It cost Louisiana and Mississippi more than $150 billion dollars and killed more than 1,800 people.

But could something like this happen in the Sacramento region?

The possibility led Jeffery Lewis from Folsom to ask CapRadio this question: “Given that we have two rivers going through Sacramento and we have an old levee system can flooding like in New Orleans happen here?”

Not If, But When

The answer CapRadio heard from levee experts is yes, Sacramento could see that type of flooding, but there are a lot of things that lower that risk.

“It’s not really a matter if a big flood’s going to happen, it's just a matter of when,” said Nicholas Pinter, associate director of the UC Davis Center for Watershed Sciences.

But Pinter says a lot of risk of flooding has been engineered away due to new infrastructure like dams. Still, he admits that “every year is a roll of the dice. There is always a possibility of catastrophic flooding. There is a very slight possibility it could overwhelm our defenses.”

There are more than 1,100 miles of levees — plus weirs, bypasses and Folsom Dam — in the Sacramento-San Joaquin Delta that help protect the region from flooding. It’s an aging system with many levees over a century old.  The U.S. Army Corps of Engineers say it’s “among the most at-risk regions in America for catastrophic flooding … but that system, just like a chain, is only as strong as its weakest link.” 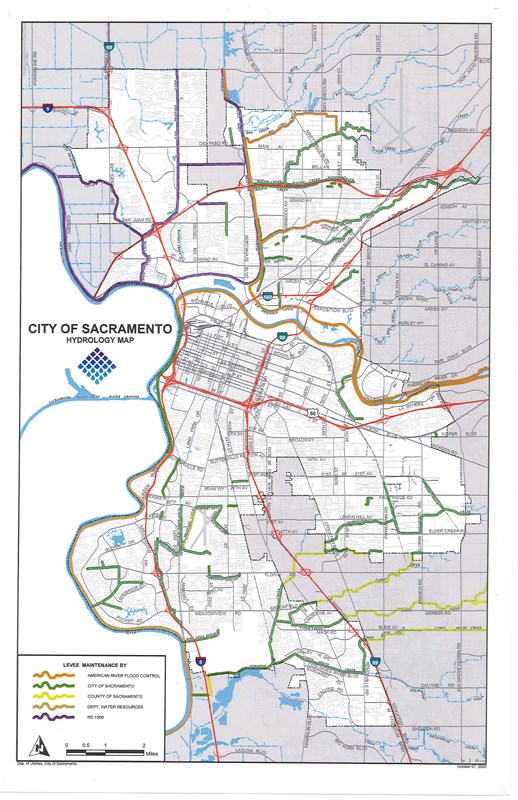 A map of the Sacramento levee system.City of Sacramento, Department of Utilities

The system has flooded with dire consequences. In December 1861, a series of storms called 'Pineapple Express’ hit the West Coast — they are warm moist storms with potential for lots and lots of rain.

These storms melted snow in the Sierra Nevada and water flowed down into the Sacramento Valley from the east for more than 40 days. The levees holding back the rivers acted like dams, flooding the city of Sacramento in as much as 30 feet of water in some places. It was so bad that the state legislature moved to San Francisco until the floodwaters dried out.

Since that megaflood, there have been a lot of smaller floods. A flood in 1986 killed 13 people, breached levees and crushed bridges. In 1995, then-President Bill Clinton met with flood victims and surveyed damage from another flood.

Then there was the 1997 New Year’s Flood. Rain fell high in the mountains melting snow engorging rivers. Sacramento was spared, but levees in nearby communities broke damaging more than 23,000 homes in Northern California and killing nine people.

Even with millions spent to keep levees and other infrastructure up to date, there's still a threat and an expectation that the region will flood at some point.

Only about half of the levees in the Sacramento region have undergone repairs, Johnson says, and the repairs won’t be finished until about 2024.

He says there are several weak places in the system. The Pocket in the south and parts of Natomas in the north need help. The system is undergoing about $4.5 billion dollars in repairs, said Greg Kukas with the Sacramento District of the U.S. Army Corps of Engineers.

He says they’re considering any kind of scenario.

“We’re designing beyond what we’ve experienced,” said Kukas. “We’re seeking not to design to some say arbitrary standard of a hundred-year flood. Rather planning based on the magnitude of consequences.

Instead Kukas says the agency wants to create infrastructure like levees with enough room to be able to handle runoff from storms that haven’t ever been witnessed yet.

For example, he says parts of the American River can now handle 30,000 more-acre feet of water than what flowed down the river during a major flood in 1986. That’s like covering 30,000 football fields with one foot of water.

Then there’s the threat of climate change on levees that protect places like Sacramento.  Johnson, with the regional flood control district, says warming temperatures are exacerbating the issue. He says all it takes is one warm storm during a big snow year to create a flood situation.

“We’re seeing the extremes almost every year,” said Johnson. “That’s the scary part. It’s either no water so you have drought problems, or you have too much water and you got floods.”

But there is some good news. Sacramento doesn’t just rely on its 21 miles of levees to hold the rivers back.

“I think most people, even myself, who lived and grew up in Sacramento, [have] no idea that every year we pump out millions and millions of gallons of water,” said Peterson with the city’s Department of Utilities.

The city of Sacramento has a drainage system with more than 350 pumps. When the ground gets saturated the pumps turn on. When it rains, many of the city’s employees go on flood watch to keep streets from pooling with water. 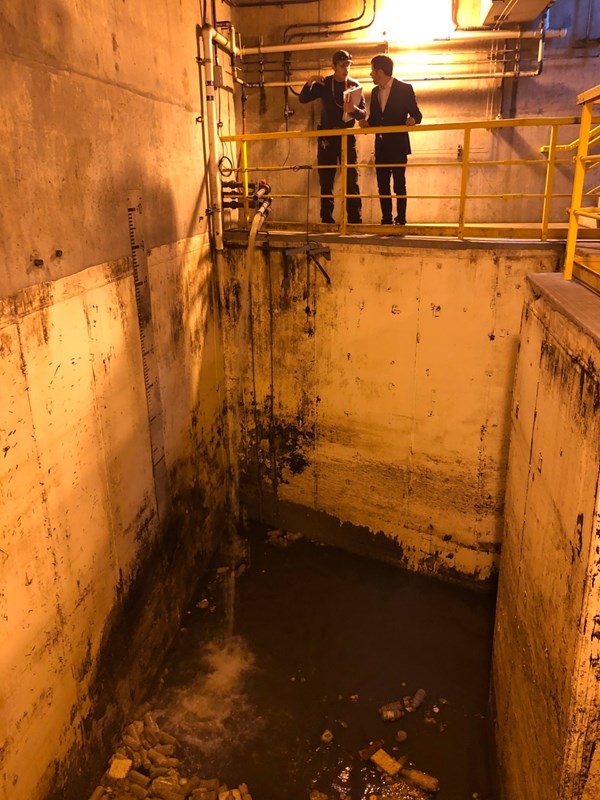 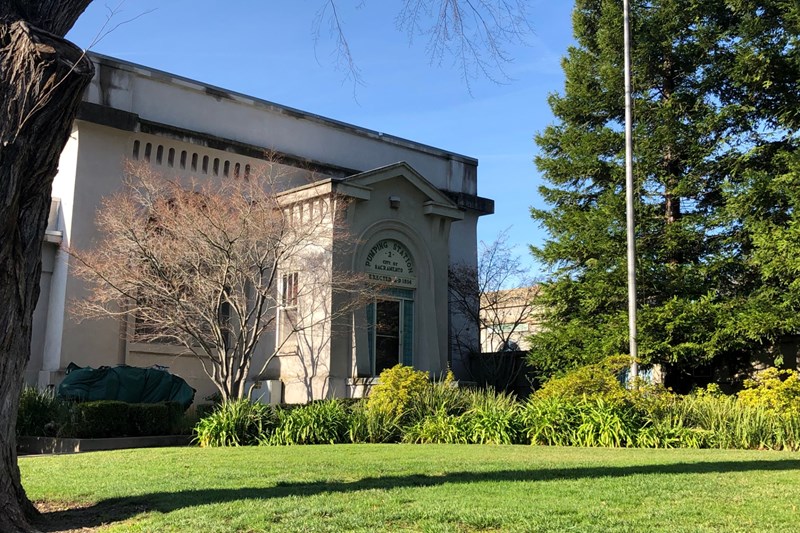 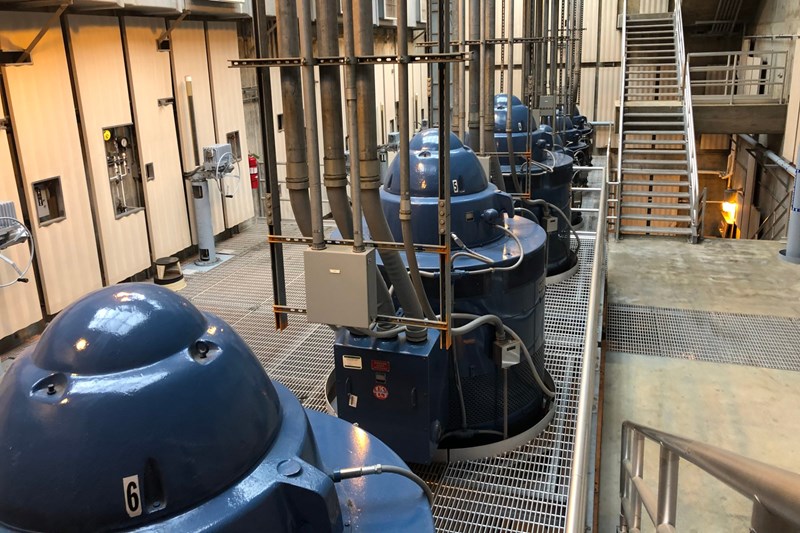 (clockwise from top left) Pumping Station 2 is one of more than 150 in the city. Gravity draws the water into the pump station where it is cleaned of debris. The station as it appears across the street from Land Park near the Sacramento River. The station has multiple generators and huge rooms full of turbines to pump water out of the city and into the river.Ezra David Romero / CapRadio

Back in the Pocket on the levee on a warm early January day the city of Sacramento’s emergency management director Daniel Bowers explains that sunny days are perfect for crews to “take the opportunity to repair and identify erosion and fix it and then the rains hit and we are in full response mode.”

Even with this elaborate system of cleaning and pumping water out of the city Bowers says people need to be ready. They should have a plan, a possible escape route and have a go bag with supplies in case of a flood.

“We take the standing point of it’s not if, but when this type of situation will occur,” Bowers said. “The benefit of this versus some of the other major hazards California has, like earthquakes on the San Andreas, is that with a flood you can expect to have some notice unless it’s some type of terrorist situation.”

People who want to know how flooding and other emergencies could impact them can sign up for regional emergency alerts.

Clarification:  This story has been updated to clarify how the Sacramento District of the U.S. Army Corps of Engineers has designed levees to handle large runoff events.