David Stern, who spent 30 years as the NBA's longest-serving commissioner and played a key role in keeping the Kings in Sacramento, has died. He was 77.

The league says Stern died Wednesday after suffering a brain hemorrhage Dec. 12. Stern had been involved with the NBA for nearly two decades before becoming commissioner in 1984.

By the time he left, a league that had struggled for a foothold had grown into a more than $5 billion a year industry and become perhaps the world's most popular sport after soccer.

Stern was also a major figure in keeping the Kings franchise in Sacramento in 2013 after a Seattle-based group attempted to buy and relocate the team. The then-commissioner attended the Kings home-opener in 2013 following the announcement the team would stay and was awarded a key to the city.

“We’ve had the best fans of the NBA here," Stern said at the time. "They’ve been supporting us for 28 years.  And I was here at the opening in 1985 and I’m glad to be here at, in effect, the new beginning.” 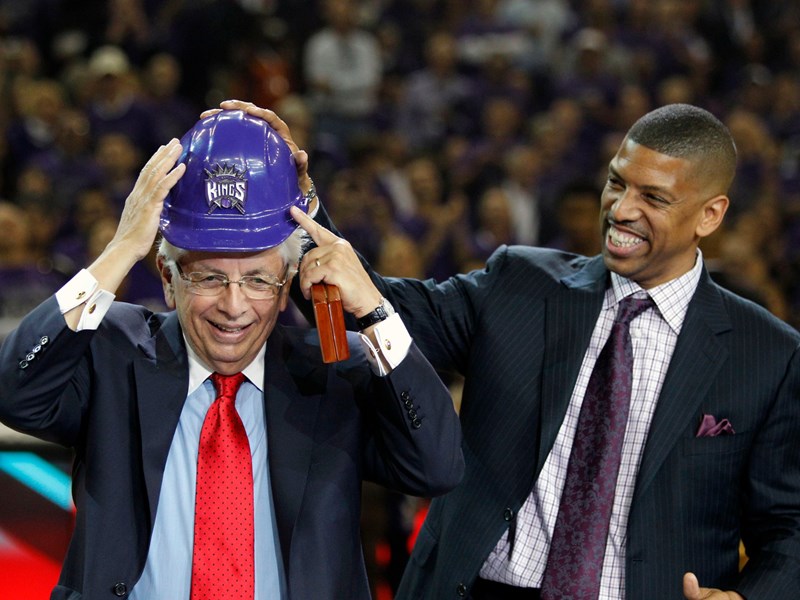 In this Oct. 30, 2013, file photo, Sacramento Mayor Kevin Johnson, right, helps NBA Commissioner David Stern put on a hard hat presented to him during a ceremony at an NBA basketball game between the Sacramento Kings and the Denver Nuggets.Genevieve Ross / AP Photo

KHTK sports radio host "Carmichael" Dave Weiglein said it's impossible to quantify Stern's impact on the Kings and the city of Sacramento.

"Of all the heroes that you could anoint as part of the saving of the Sacramento Kings, the person on the throne at the top of the hill is David Stern," Weiglein said. "There's a reason why the street where Golden 1 Center sits is named David J. Stern Walk.

"The Kings would not be here — and forget basketball, all the surrounding development and everything that went with it — would not exist without David Stern," he said.

“David will always be remembered as Superman in Sacramento."

In a statement, Kings Chairman Vivek Ranadivé said Stern was a "brilliant leader" who helped turn the NBA into a global force, and praised his role in keeping the Kings in Sacramento.

"David will always be remembered as Superman in Sacramento. His impact on the league will leave a lasting imprint around the world and his fierce support of the team and this community is the reason why the Kings stayed in Sacramento. David’s enthusiasm for our city and belief in our fans will never be forgotten."

"He believed in our city and its promise, and because of that we have both the Kings and a major civic amenity that has helped lift our downtown," Steinberg said. "He was a great leader.”

This story is developing and will be updated.

The Associated Press contributed to this story.