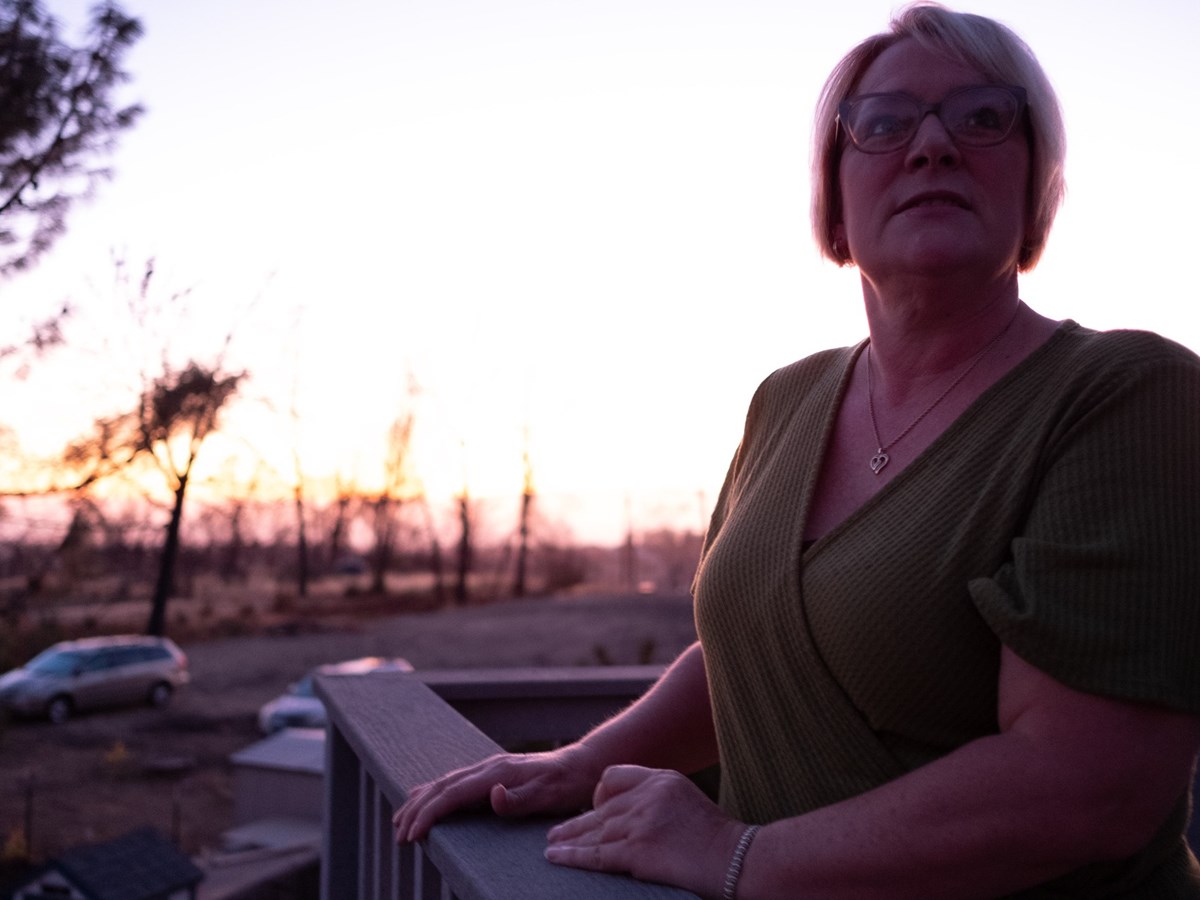 Lori Hornback stands on a balcony in her home.

The Hornbacks were a close-knit family before the Camp Fire destroyed their hometown of Paradise one year ago. But now, they’re really close.

The multigenerational family of 11 lost all four of their houses in the catastrophic fire that incinerated the town and killed 86 people. After struggling to find new places to live, the individual households pooled their savings to buy one big house on the outskirts of Paradise, and moved into it in February.

“We were empty nesters and now we're one huge family, 24 hours,” said Lori Hornback, whose kids, Brittani and JB, moved out years ago and now have their own families. “Now they don't go home. They stay here.” 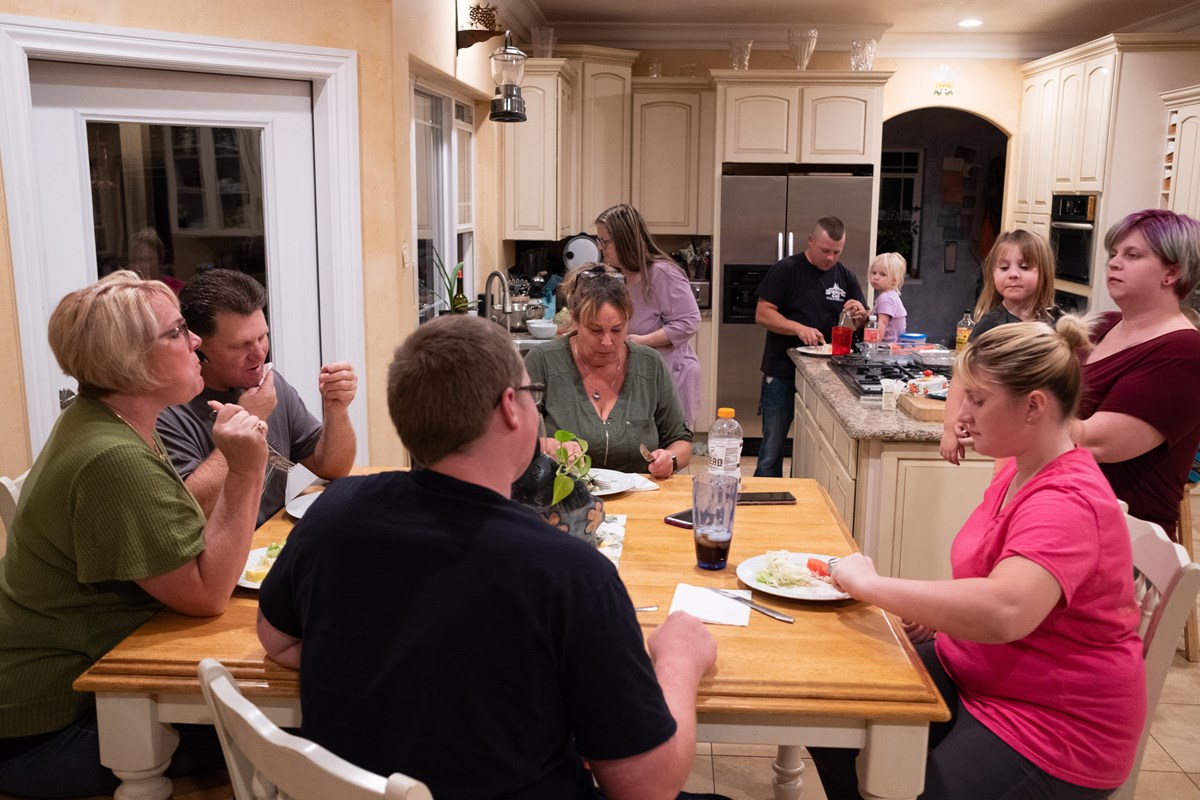 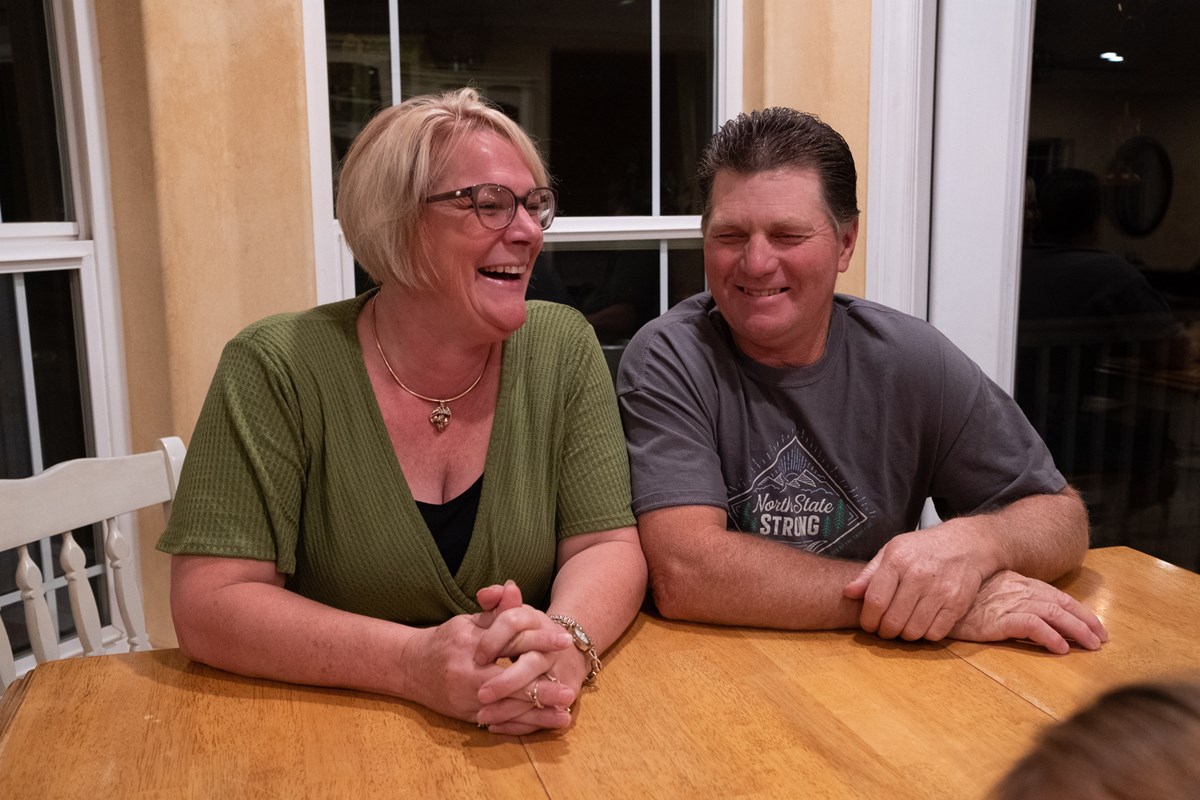 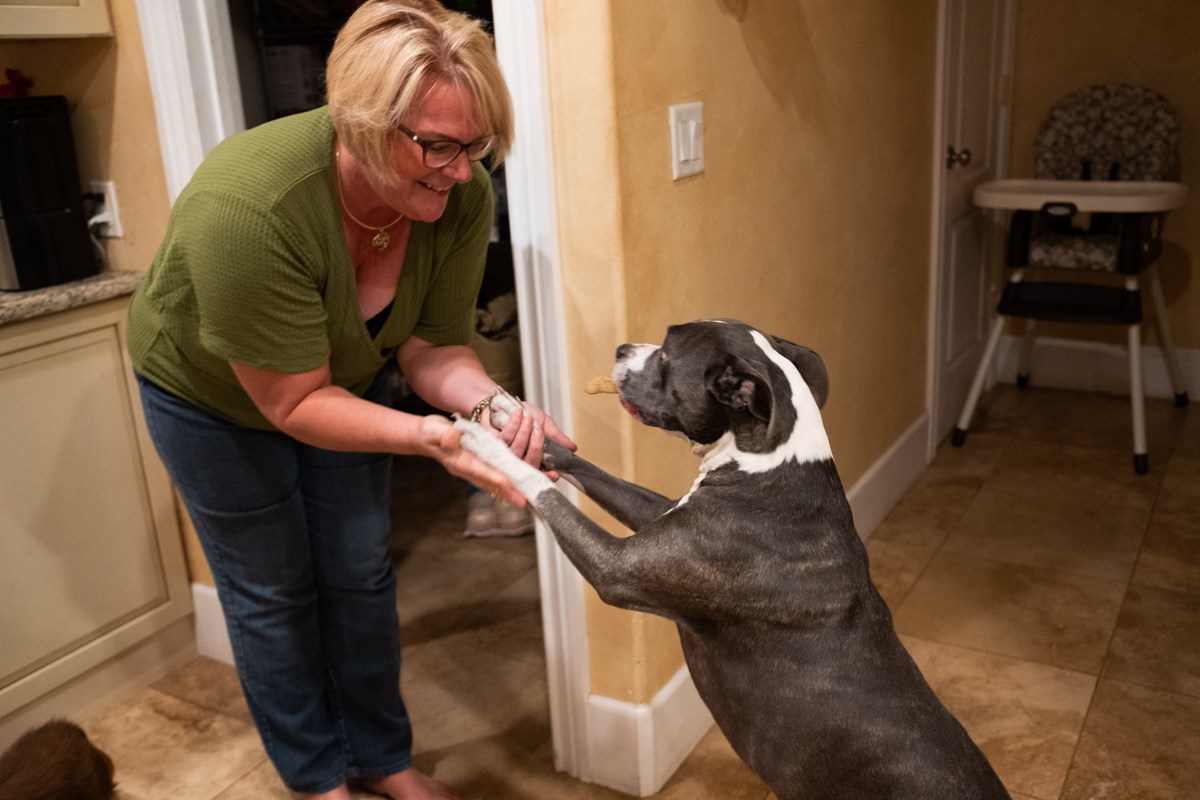 All 11 family members dine together, and also take financial responsibility and split labor around the house. (Bottom right) Lori Hornback gives a treat to Remi, one of four dogs living in the house.Andrew Nixon / CapRadio

The new household includes Lori, her husband Jon, their two children and their spouses, four grandchildren, and their daughter in law’s mother. That's 11 people under one roof, ages two to 58.

The large, white house sits on a 40-acre lot at the end of a long, dirt road, removed from the fire-damaged areas, with a pristine view of the nearby mountains and valleys.

The Hornbacks never thought they would all be living together. After the fire, Butte County's already tight housing market was flooded with demand from more than 13,000 displaced families, many living in tents, trailers, on friends’ couches or in shelters.

The town's roughly 1,000 rental units that were available before the fire broke out were all quickly claimed by fire survivors, according to Ed Mayer, executive director of the Butte County Housing Authority.

The scarcity of housing led to major price spikes, with rental rates jumping around 13% per square foot and sale prices jumping 20% per square foot in the first three weeks after the fire, according to Zillow, a real estate listing firm. 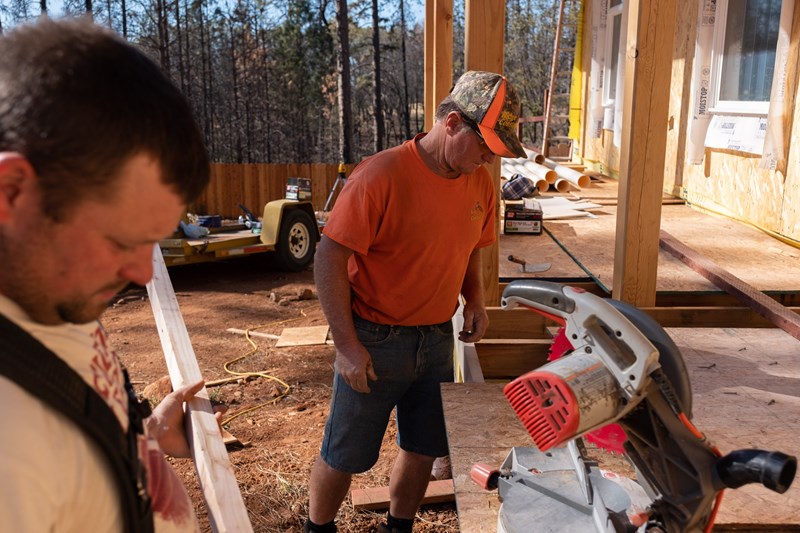 But even as the market is pressuring people to leave, many don’t want to.

“There's a real population here, particularly in the hill country, of folks who've lived here … this is all they know,” Mayer said. “It’s a rural lifestyle and there are the kind of communities up there that are mutually supportive.”

'I Don't Think We Had a Choice'

“I don't think we had a choice,” said Jon Hornback, Lori’s husband, explaining why the extended family moved in together. “We’d looked all over the valley as well. And I'd had my insurance company looking for us, you know, for two months. They looked and never could find anything.”

On a recent Wednesday evening, the Hornbacks stood around their kitchen island eating dinner by the glow of electric lanterns. That night, PG&E had shut off power in a preemptive effort to avoid a repeat of the Camp Fire.

“Nothing’s really the same for us,” Jon said.

Lori Hornback displays an illustration that an artist drew on a portion of a tree stump the family found outside their destroyed home. 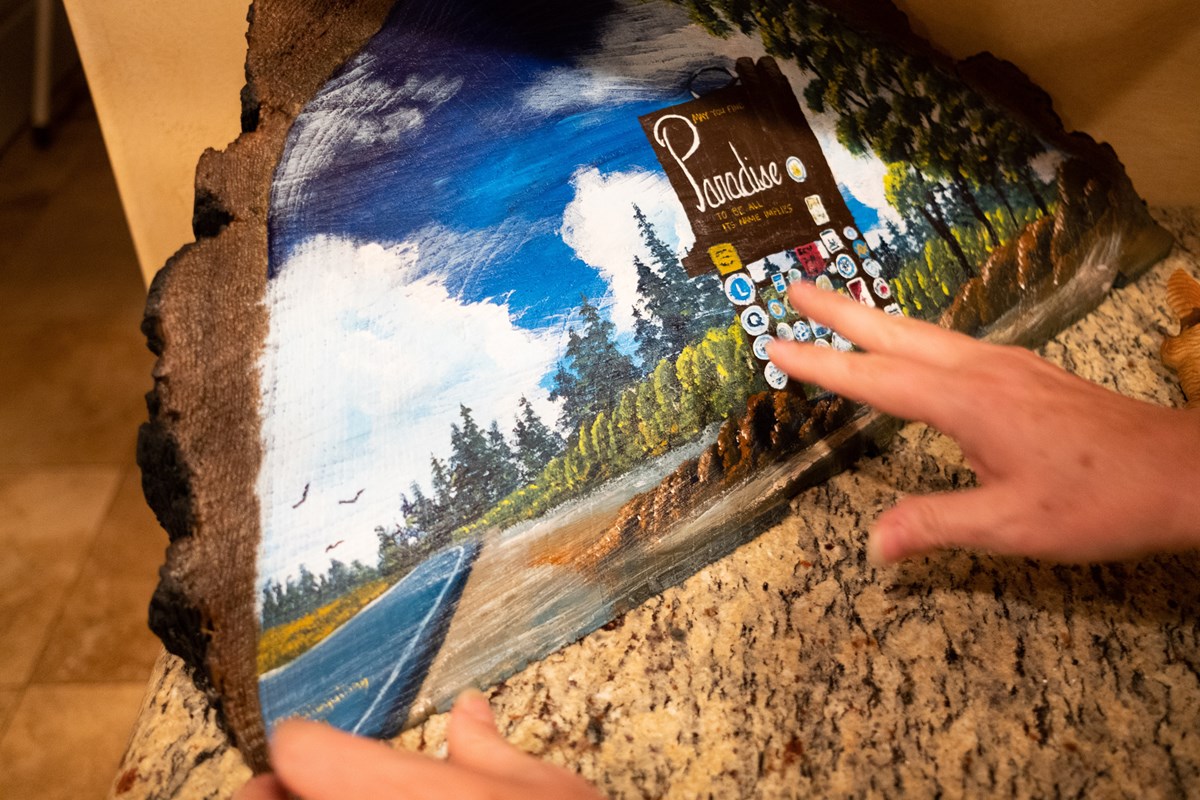 An artist painted a portion of a tree stump from the Hornback's home that was destroyed in the Camp Fire.Andrew Nixon / CapRadio

The kitchen spills out onto a large open living room area where the extended family hangs out each night, although now they hardly ever watch TV anymore; everyone streams shows on their own devices so as not to disturb each other.

“We've learned to app just about everything,” he added.

When they’re not trying to be quiet in the mornings, the Hornbacks are such a loud family that “at times you can't hear yourself think,” Jon said.

But they have a solution for that too: Even though the house is only technically three bedrooms, the family converted the garage and a couple of other side rooms into extra sleeping areas. 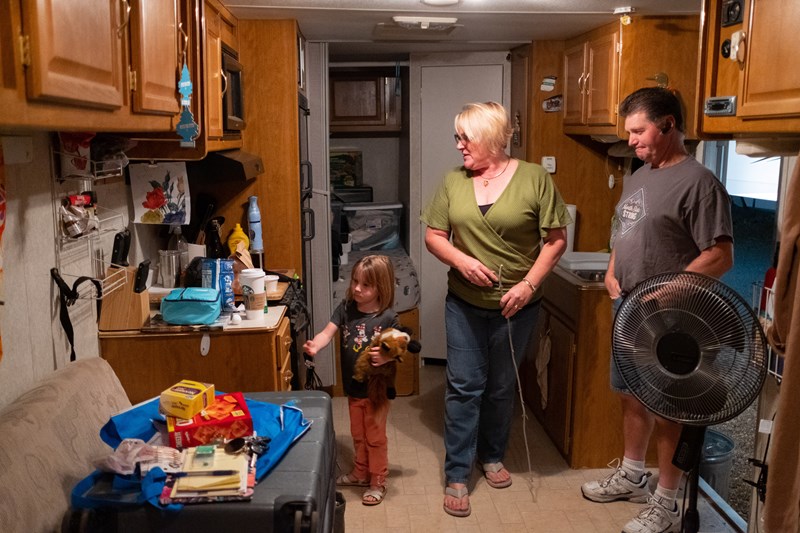 Marlee Richardson, 4, and Lori and Jon Hornback lived in this trailer after the Camp Fire and before purchasing a home in Paradise.Andrew Nixon / CapRadio

“When it gets chaotic ... we go to our respective corners and put ourselves in time-out room,” Lori said, laughing.

The set-up seems to work for Ayden Richardson, Lori and Jon's 9-year-old grandson.

Lori said when she first saw this house, she knew it was a place they could all live in together. “I got in the foyer and I said, ‘I'm home.’ ”

Adjusting to Life After Fire

Brittani Hornback — Ayden's mom and Jon and Lori’s daughter —said that she and her family lived in a trailer for four months after losing their home in the fire, and searched extensively for a new place to move into near Paradise. But the selection was scarce.

“I didn't want to be away from my family and I wanted to go back home,” she said.

Not everyone in the family, though, was sold on moving back to Paradise — especially Lori, who was still traumatized from the day they escaped the fire and worried about lingering toxins from the debris.

The morning the fire broke out, she fled town in a caravan with Brittani and her kids, the flames closing in on them and propane tanks exploding in every direction.

“That's all we heard, was propane tanks,” Lori said. “I was picking my son up from elementary school and there were just these big embers. ... We were running from flames and smoke.” 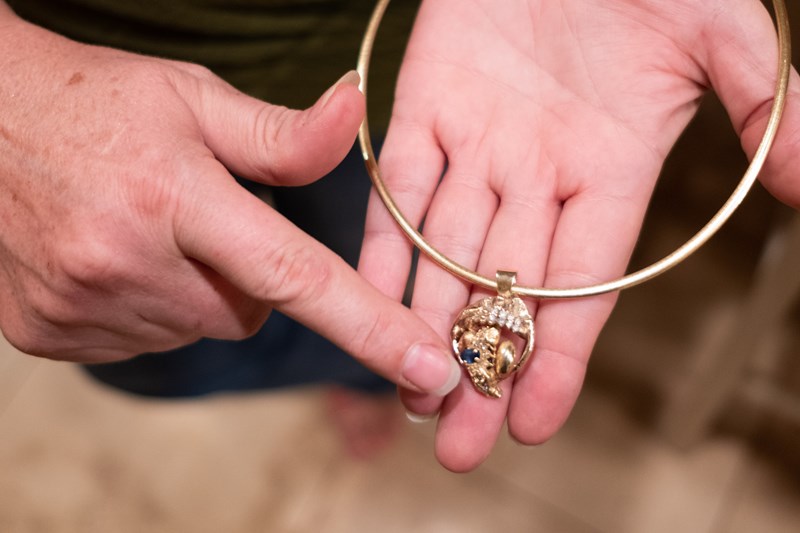 Three of Lori Hornback's rings melted together in the Camp Fire, and she wears them as a single pendant after recovering them from her previous home.Andrew Nixon / CapRadio

A number of family members continue to struggle with that trauma, and living under the same roof is helping them deal with it. That was on display that night as they sat around the kitchen table talking, and something started beeping.

“Why is the fire alarm going off?” Kelli Hornback, Jon and Lori’s daughter-in-law, asked, in a slightly panicked tone.

Brittani and Kelli ran upstairs to check, and quickly informed everyone that smoke from their generator had drifted into the house through a window, setting off the alarm. Nothing to be concerned about.

The two said they also felt disturbed when they came across the candles that were being used to illuminate the bathroom during the power shutoff, the flame casting a red glow on the wall.

“It was just a big trigger for me and my sister because, you know, the glow of fire is something that we don't like to look at,” Brittani said. “So when you see certain things, you freak out.”

There are also plenty of other uncomfortable reminders. Two of Brittani's kids, who were in the backseat of her car as she fled Paradise that day, have started regressing in their development. Her daughter McKenzee, who was one at the time, abruptly stopped crawling. 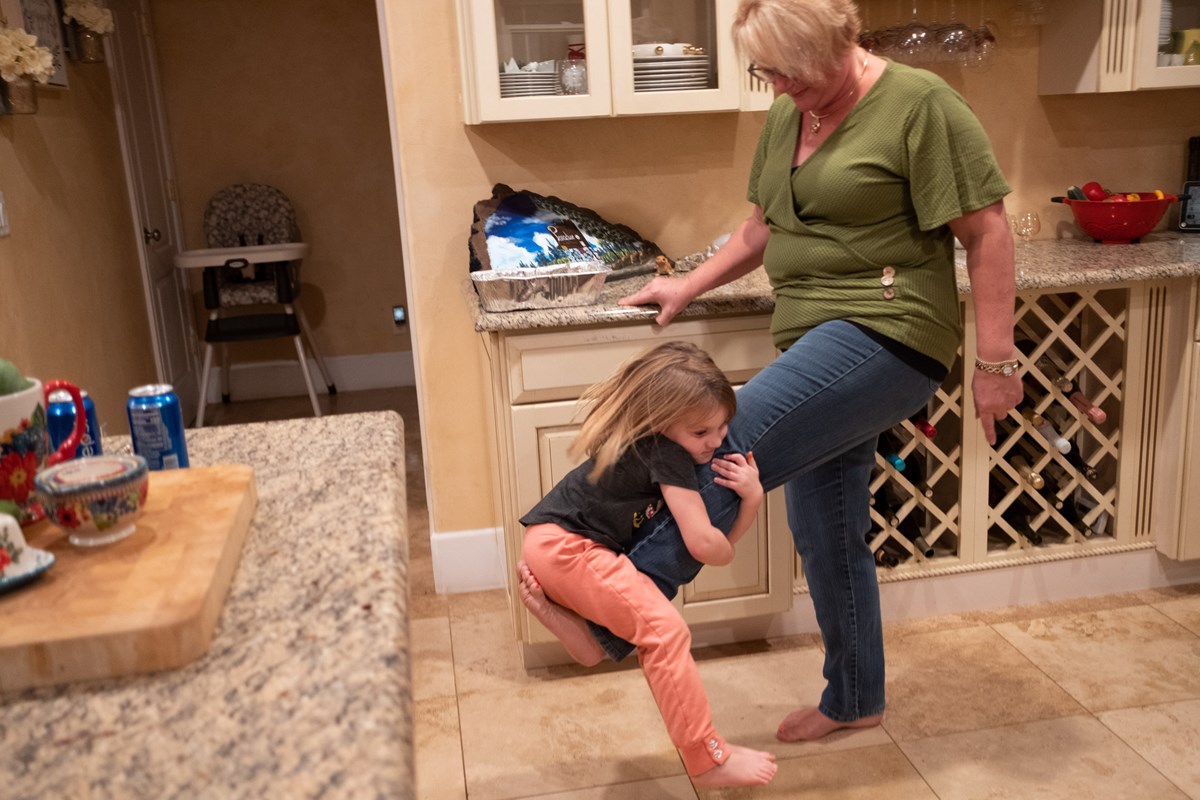 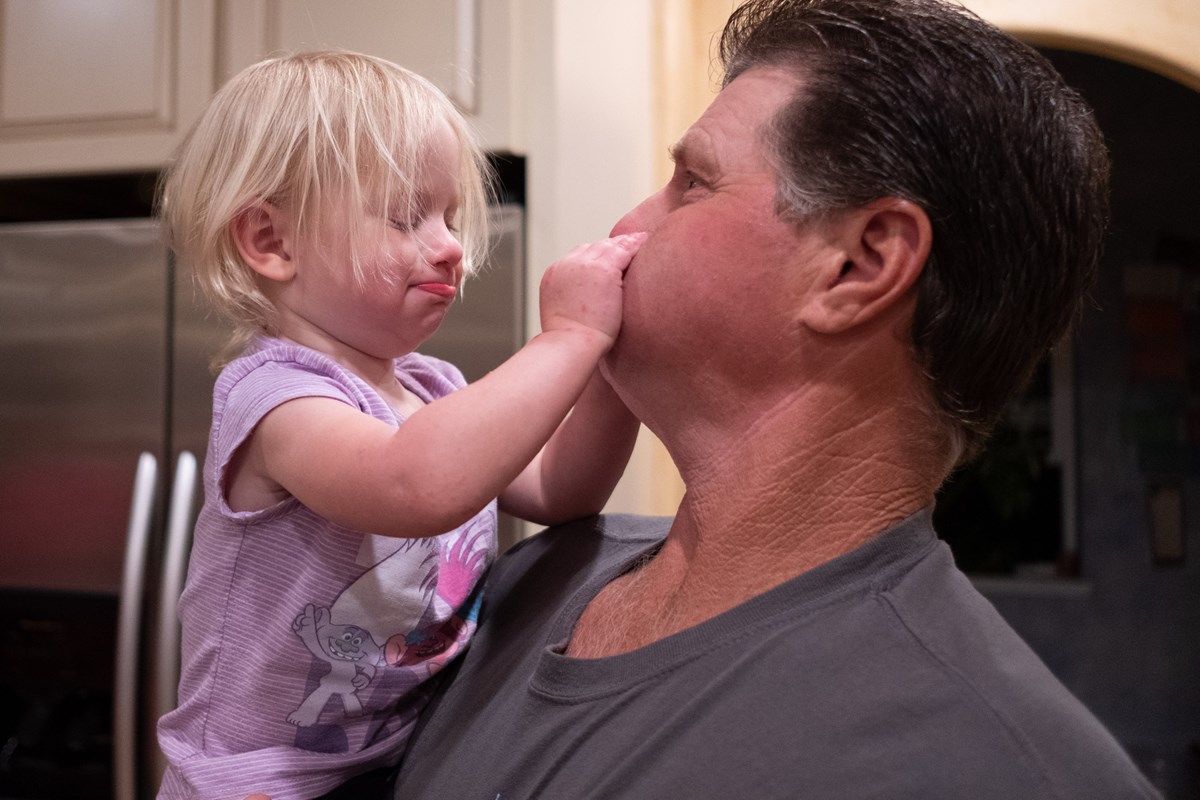 “She wouldn’t do anything she would just sit there and just cry,” Brittani said.

Her four-year-old daughter Marlee, who used to be really talkative, pretty much stopped speaking, she said.

“It doesn't feel good at all,” Brittani noted. “It was really sad because they went backwards and that's not good. It's not a good sign.”

Marlee sat on Brittani’s lap, holding a doll they were able to rescue from the ruins of their house, its plastic head partially melted by fire.

“That was the only thing she had left of her home,” she said. “We named him Ash after the fire. And he survived.”

In mid-January, months after the fire, she was still living in a Red Cross shelter in Chico.

“I felt adrift,” she said. “I didn't know what's going to happen, just trying to get by one day at a time.”

Caseworkers at the shelter weren’t able to find Ramsey a place anywhere nearby that she could afford. By the end of January, they had found her a one-bedroom apartment nearly 200 miles north in the town Yreka, near the Oregon border.

“It feels good to have a place of my own to gather my thoughts and pull myself together,” said Ramsey, sitting comfortably on a sofa in her new home.

Her doctor, Ramsey said, diagnosed her with post-traumatic stress syndrome, a condition brought on by the harrowing experience she had fleeing her home as flames closed in around her. For three days, she said, she couldn't find her son, who has a disability, thinking he had died. She was then homeless for more than two months.

Her new life, though, is far from Butte County, where her son still lives.

“Being a mom, you want to be closer to take care of your children if they need [you],” she said.

Ramsey said she hopes to move back to Butte County someday. But, for now, she’s focused on building a new community in Yreka.

“And it may be temporary, this place,” Ramsey said. “But it feels good to have a place at least you can call home.”