Pacific Gas & Electric announced Sunday that yet another round of power shut-offs could start Tuesday even as millions of Californians were without electricity from outages that began this weekend in much of the region.

It would be the third planned outage from the utility this week to try and prevent its equipment from sparking wildfires amid dry weather and historically strong winds.

The company said that the latest power shut-off would affect people in 32 counties starting Tuesday morning through midday Wednesday, and warned some customers may experience continuous outages.

PG&E says the current shut-offs began around 5 p.m. Saturday in the Sierra foothills and north of the San Francisco Bay Area. Blackouts are affecting parts of 38 counties and last until at least Monday. In addition to the public safety shutoffs, PG&E said roughly 100,000 customers were affected by "emergent outages."

You can view outage details on PG&E’s outage map.

The California Health and Human Services has established an emergency hotline to help those who are medically vulnerable and help health facilities find resources during the shutoffs. The hotline is (833) 284-3473.

PG&E said at a press conference Sunday evening that restoration efforts had begun early for affected areas in the North Valley, Northern Sierra and North Coast, including eight of the affected 38 counties.

The utility said "all-clears" — when restoration patrols can begin — would occur for all the remaining areas between 6 and 8 a.m. Monday morning. 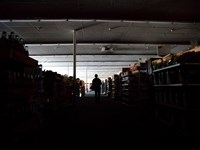 The National Weather Service has called a red flag warning for much of Northern California amid very dry conditions and what they call "the strongest wind event" this season. PG&E is advising customers to prepare for outages lasting several days.

The map below is approximate. PG&E also has an address lookup tool that will provide more exact information.

The shutoffs come as the utility said its equipment was damaged near where the Kincade wildfire started in Sonoma County Wednesday night during a separate shutoff. PG&E said power was shut off to distribution lines but not to transmission lines.

PG&E CEO Bill Johnson said it was too soon to say whether the faulty equipment sparked the fire. He said the tower had been inspected four times in the past two years and appeared to have been in excellent condition.

Johnson has said it will take about a decade before widespread outages aren't necessary.

The line that failed this week is newer and should have been more robust, said Michael Wara, director of the climate and energy program at Stanford University. Its failure will probably make PG&E more cautious, which means more widespread blackouts, he said.

Turning off big transmission lines reduces the stability of the electrical grid, leading to bigger outages, Wara said. Transmissions lines also take longer to re-energize because everything connected to them must be inspected, he said.

The repeated shut-offs and the prospect of longer and more widespread ones brought anger down on the utility from the governor and ordinary customers.

"We will hold them to account," warned Gov. Gavin Newsom, who has repeatedly blasted PG&E — the nation's largest utility — for what he calls years of mismanagement and underinvestment that have left its grid less resilient.

PG&E began a policy of cutting power to prevent fires in October of last year, one month before the Camp Fire killed 84 people in Butte County. That fire has since been blamed on PG&E equipment, which the utility decided not to shut off in the hours preceding it.

The Associated Press contributed to this report