In a dimly lit dance studio in midtown Sacramento, a group of children have a rare moment to be themselves.

The instructor places a toy in the middle of the room and tells the students to find their way over or around it. One by one they run and sashay across the floor, pretending to be a bird flying past a mountain or a frog over leaping over a pond. Kaleb, one of the oldest of the 5-to-10-year-olds, picks up the toy and pretends to use it as a telephone.

In a typical dance class, an instructor may have scoffed. But here, in a special program for people with autism and other developmental disabilities, anything is allowed.

“Sometimes running or yelling or doing what they want to do is how they express themselves, and they’re not always allowed to do that outside this room,” said class instructor Lauren Breen. “We want to give them that safe space to just be who they are and be confident in that.”

Breen is a performer and co-founder with the Capital Dance Project, founded in 2015 by dancers from the Sacramento Ballet. This summer the group expanded its offerings for people with autism and other disabilities with sensory-friendly classes.

People with these conditions can experience sensory overload, so these classes feature low lighting and soft music. Noise canceling headphones and fidget toys are available for students who get overwhelmed, a support person is onsite, and breaks on the sideline are recommended. 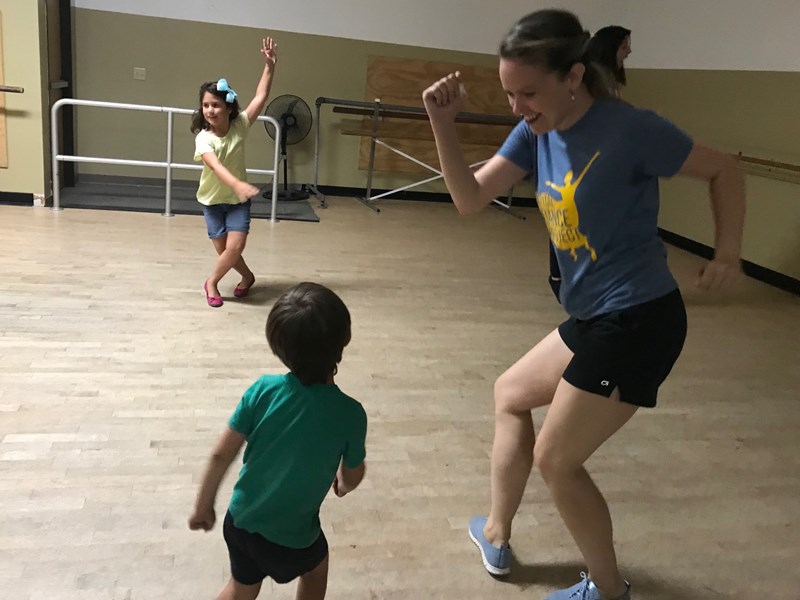 Lauren Breen, a dancer and co-founder with Capital Dance Project, instructs children at a class for people with autism and other developmental disabilities.Sammy Caiola / Capital Public Radio

The choreography is a guideline, not a requirement, and many of the students go off on their own. At a recent session, an energetic 6-year-old named Tommy was in the corner playing a game with the mirror, while a boy named Sullivan curled in his mother’s lap on the playmat, not quite feeling up to social interaction. Another dozen or so children circulated the studio, stretching their bodies into new shapes or leaping and turning along with Breen and the other teachers.

Autism Spectrum Disorder has a wide range of symptoms, but it primarily affects communication. Some people on the autism spectrum have high IQ’s but struggle with social interactions, while others have developmental delays or are unable to speak in full sentences.

About 1 in 59 U.S. children have autism, according to the U.S. Centers for Disease Control and Prevention. Schools, extracurricular programs and workplaces are gradually becoming more inclusive of these students, but parents say there’s still a lot of misconceptions about autism that make it hard for children to navigate the world.

Kaleb’s mom Jennifer Garay says this is the only dance class they’ve found that works for him. He has fragile X syndrome, which shares some symptoms with autism, and speaks mostly in two-word phrases.

“If he tries to run off or yells it’s acceptable,” she said. “It’s kind of nice, instead of going out to other places where sometimes you get looks from other parents and stuff.”

She’s looking for new options for Kaleb now that the summer program has ended. Capital Dance Project hopes to bring the classes back in the future.

A growing body of research shows that dance and other creative arts can help build confidence and communication skills in people with autism and other developmental disorders, while also reducing stress and anxiety.

The Capital Dance Project expanded the summer classes with funding from Kaiser Permanente. The series is an extension of their autism programming over the last three years, which has also included live performances tailored for audience members with disabilities.

This Sunday the company will present its third annual sensory-friendly dance performance.

What: An inclusive live dance performance designed for individuals with autism, or other sensory related disabilities, and their families.

Where: The Sofia, home of B Street Theatre, 2700 Capitol Ave in Sacramento

More about The Art Of Healing