Men in drag have long been a staple of popular summer comedies staged outdoors.

This month, Main Street Theatre Works in the Sierra Foothills is proving that audiences still love laughing at a tall man in an awkward dress in the farce “Leading Ladies.”

They see a newspaper item about a wealthy old woman who’s just died and bequeathed her fortune to her nieces — but the nieces had moved to England decades before and haven’t been heard from in years. One of the actors proposes that they don dresses, impersonate the long-lost nieces and cash in.

At first, his companion will have none of it, and the two argue.

Leo Clark: We can do it! It will work! I’ll be Maxine, you’ll be Stephanie.

Jack Gable: Wrong! I am not doing that, ever! I don’t dress up as a woman!

Leo Clark: For a million dollars, the question is ‘Which dress do you wear?’

Jack Gable: Would you stop it! Just cut it out right now! Just stop it!

Leo Clark: Oh oh oh, I think I look good in this one. Cleopatra, Queen of the Nile.

But the lure of easy money is irresistible. Soon, these gentlemen are introducing themselves as the long-sought nieces, who have, naturally, been working in British theaters in their absence.

“Hello, hello, hello, my darlings. Oh how wonderful to arrive at long last, into the bosom of my own dear family. Oh, this blessed plot, this air, this realm…” Clark says, dressed as Maxine, when he meets the family. 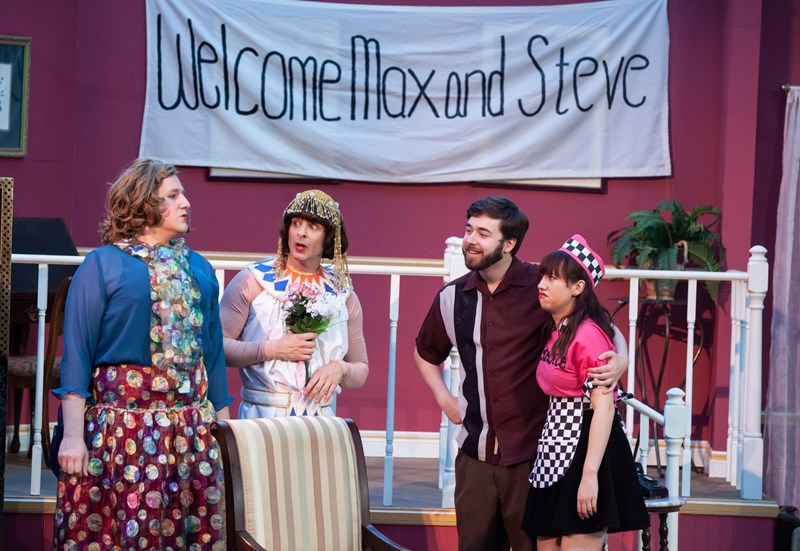 There are, of course, complications. For one thing, the old woman with the money makes a miraculous recovery and is still very much alive and cranky. And as the play moves along, various family members begin to doubt the authenticity of their British guests.

Soon, secret letters are circulating and doors are slamming as chaos ensues with people running every which way.

Shakespeare himself knew that a guy in drag could be good for the box office. Back in the 1500s, he had his most popular character — the burly Falstaff — don a dress in “The Mery Wives of Windsor,” and Elizabethan audiences loved it.

Director Allen Pontes does a good job setting up the scenes involving mistaken identity, lightning-quick costume changes and assorted schemes going off the rails. The play is smartly staged at a suitably rapid pace.

The cast of community actors in this production includes longtime stalwart Maggie Upton as the imperious old lady with the money, who eventually realizes that her nieces are imposters. But, she decides she likes them anyway — because it’s that kind of summer comedy.

The balmy evening air in the cozy Kennedy Mine Amphitheatre compliments the improbable shenanigans onstage. Take a picnic basket and enjoy.

The Main Street Theatre Works production of “Leading Ladies” continues outdoors at the Kennedy Mine Amphitheatre in the foothill community of Jackson on Fridays and Saturdays through July 20. 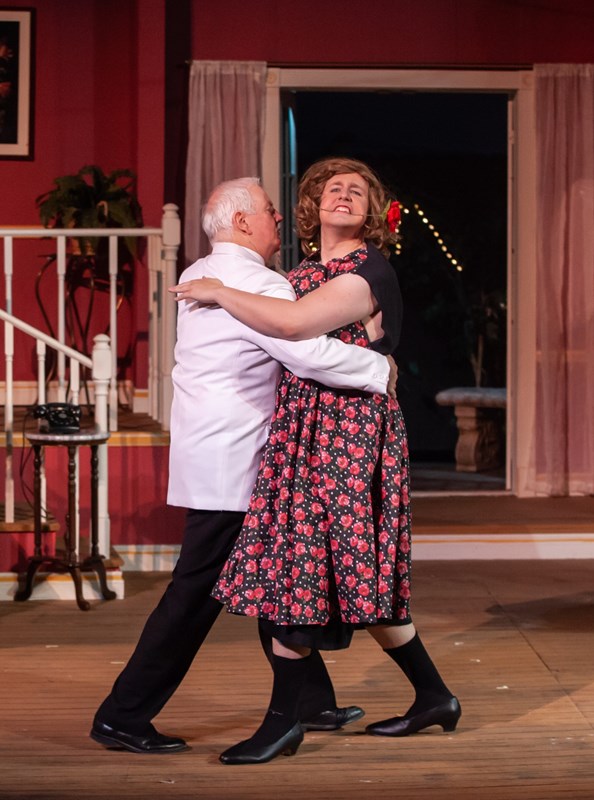 Scott Taylor as Doc Myers, Skyler King as StephanieCharr Crail Photography
Follow us for more stories like this