By Sukey Lewis and Alex Emslie

Four Napa State Hospital police officers kept their jobs after state investigators found one of them used excessive force when he slammed a 64-year-old patient’s face into a concrete wall, and three others wrote misleading reports and failed to adequately investigate the March 2017 incident.

Jose Alvarez, who has bipolar disorder, was sent to the hospital with a fractured eye socket, broken teeth and cuts to his face. He was arrested and spent seven months in jail before charges were dismissed.

In a recent phone interview from Patton State Hospital in San Bernardino, where he is currently housed, Alvarez said he was agitated that day but was not a threat to anyone.

“Four police officers tried to kill me in Napa,” Alvarez said. “They tackled me and drove me face-first into a cement wall, and I lost (several) teeth.”

A doctor who witnessed the incident told investigators it was the most “brutal” takedown she had seen in 11 years of working at Napa State Hospital, according to records released by the Department of State Hospitals under California’s new police transparency law. The officer who pushed Alvarez into the wall also hit his head during the encounter and was treated for a possible concussion.

After the internal investigation, the Department of State Hospitals initially recommended firing all four officers, but that discipline was significantly watered down after the officers appealed.

In the end, Hauscarriague’s pay was reduced for 10 months. Officers Jose Becerra, Vuong Truong and Stuart Donaldson were all served with letters of instruction and retrained on use of force, communication, report-writing and interviewing policies, according to Department of State Hospitals spokesman Ralph Montano. The fifth officer to respond that day, Ross Tweedy, disputed the other officers' claims that Alvarez was a physical threat and "dragged" Hauscarriague into the wall.

"That's not what I saw," he told investigators, according to the records. Tweedy wasn't disciplined.

Napa State Hospital, which primarily houses people charged with crimes but found incompetent to stand trial, has a history of security issues. Following the murder of a nurse in 2010, the hospital hired more police officers and installed Dominique Hauscarriague as their new chief. Staff were outfitted with personal alarms so they could call for help if they felt threatened.

Alvarez’s disorder started shortly after he turned 18, according to reports to the court provided by his attorney. Alvarez owned a landscaping and home repair business for a time, but records show his illness made it difficult for him to maintain employment and personal relationships. Over the past four decades, he spent time in multiple state and local institutions.

During a manic episode in 2008, Alvarez was arrested for assault on a peace officer in Sonoma County. He was found not guilty by reason of insanity and committed to Napa State Hospital.

On March 23, 2017 Alvarez was having a negative reaction to a change in his medication, his doctor told investigators. Records show he was very upset and shouting obscenities in an outdoor yard. A psychiatric technician pushed her personal alarm, and five officers, including Hauscarriague, responded from a nearby building.

Several staff members told state investigators that police, and particularly Michael Hauscarriague, were aggressive and charged Alvarez before checking with doctors or considering whether the patient was a threat, the records show. Also, medical staff disputed summaries of their statements to police after the incident that omitted their descriptions of the unwarranted use of force. Some wondered why they were questioned by officers who were involved in the incident.

“The minute they saw what happened to his face, the decision was made that they needed to charge him with something,” said Karen Silver, Sonoma County deputy public defender and Alvarez’s attorney. “I think it was real clear once Mr. Alvarez’s face was examined, before he even went to the hospital: You better cover your ass with something that shows that that was proper force.”

McCullough said his sergeant told him: “We are looking to make an arrest.” The urgency to arrest Alvarez was due to a peace officer being injured, according to McCullough.

“Nobody squeezed me to do anything special because it was the chief’s kid,” McCullough told state investigators.

A therapist expressed shock when she learned from state investigators that Alvarez had been arrested and charged with serious felonies, including resisting arrest and battery on a peace officer resulting in great bodily injury. Along with McCullough, Alvarez’s primary doctor also told investigators that higher-ups at the hospital pressured him to send Alvarez to jail, where the patient spent seven months until all charges were suddenly dismissed by the district attorney in October 2017.

Though investigators asked McCullough about the chief’s possible involvement in the arrest, records do not indicate that the investigation further probed any improper involvement of medical or police supervisors in the case.

The DSH omitted disciplinary documents in its recent release of information in response to a public records request. KQED has again requested those disciplinary documents, but they have not yet been provided. Requests to interview the police chief, medical director and executive director of Napa State Hospital were declined. Attempts to reach Michael Hauscarriague directly were unsuccessful, and attorneys for the police officers did not respond to requests for comment.

DSH spokesman Montano wrote in response to emailed questions that Dominique Hauscarriague played no role in the investigation or discipline of his son or the other three officers who were found to have authored misleading reports and failed to adequately investigate.

After being assigned the case, McCullough told the officers involved in the incident that they needed to add more details to their reports to justify the use of force, records show.

“He explained that as written, [Alvarez] was complying with verbal orders and you tackle him,” state investigative records show.

Officers Donaldson, Truong and Becerra then added details in their reports that exaggerated the threat posed by the patient, records show. These officers stated that the elderly Alvarez, who was 5-foot-4, turned toward Hauscarriague as he was being tackled and pushed the 6-foot-tall officer, who was 24, into a nearby wall.

Hauscarriague would later tell investigators that he and the other officers were familiar with Alvarez, that the patient had threatened to kill police officers, had recently head-butted an officer and was known to make weapons.

But the details of that history reveal that Alvarez was struggling with his illness following a medication change. His alleged pattern of weapon-making stemmed from a December 2016 confrontation in which Alvarez broke a radio in his room and was carrying a broken antenna, which police later characterized as a “shank.” He put the antenna down when he was ordered.

During an outburst in January 2017, records show, hospital police officers pushed him against a wall, and Alvarez “used the back of his head and head-butted” an officer, who was uninjured and who “refused to press charges.”

His history in the hospital is peppered with arguments with staff and threats to police officers. But medical staff told investigators that this type of behavior is not unusual for the patients they deal with.

On March 24, 2017, McCullough arrested Alvarez and suggested charging four felonies: resisting arrest, criminal threats, battery on a peace officer with injury and battery causing great bodily injury. He was booked into Napa County Jail. Police Chief Dominique Hauscarriague appears to have signed the paperwork transferring Alvarez to county jail the day after he was injured.

Alvarez’s primary doctor, Dr. Domingo Languitan, also told investigators and Alvarez’s attorney that there was internal pressure to send the patient to jail. He said that his supervisor told him to write the required medical recommendation. Languitan had never done this before, he said, and it was not his opinion that criminal charges should be filed or that Alvarez should be sent to jail. Languitan did not return a phone call seeking comment.

Hauscarriague, Truong and Donaldson all testified at a July 6, 2017, preliminary hearing. They all said Alvarez’s fists were clenched and his back was toward the officers when Hauscarriague ran toward him and grabbed him from behind. They testified that Alvarez turned and pushed against Hauscarriague, and then they both fell into the wall. Based on the officers’ testimony, a judge found the charges against Alvarez credible and he was held in jail for three more months before the case was dismissed by prosecutors.

“Those cops lied,” she said.

No part of the state’s investigation considered potential perjury, however, according to DSH spokesman Montano.

A very different story emerged during the state’s investigation, conducted by the Office of Law Enforcement Support, a little-known oversight agency created in 2015 after concerns about patient safety at state hospitals and developmental centers. Civilian staff and patients who were interviewed by investigators said that Alvarez was agitated and “mouthing off,” but was never a direct threat to anyone.

Dozens of people were in the courtyard that day. State investigators interviewed five patients and six medical staff, none of whom reported seeing Alvarez fight back against police. Staff members said they were surprised when Hauscarriague “tackled” Alvarez, taking him into the wall. Because Alvarez was on his own in the yard, was not an imminent threat and did not have a weapon, the procedure would have been to try to talk to the patient and get him to move into a side room to calm down.

A therapist laughed when state investigators told her about Donaldson’s description that the comparatively slight and elderly Alvarez dragged Hauscarriague as he attempted a tackle — a description Donaldson repeated during sworn testimony. The therapist said that didn’t happen.

It's unclear whether McCullough is facing discipline. DSH spokesman Montano wrote in response to questions about McCullough that "the matter has not yet been concluded."

Napa County District Attorney Allison Haley did not comment on the case, but said her office reviews all matters submitted to it.

“We decline to file [charges] when the evidence is insufficient to prove the charges beyond a reasonable doubt to a jury,” she wrote in a written statement.

Though the criminal charges against Alvarez were dismissed, his encounter with hospital police two years ago is still referenced as a violent incident in his psychiatric reports. He sees it as a factor that’s keeping him committed, and he wants the public to know what really happened.

“The public needs to be educated that we’re not just animals locked up,” he said. “That’s what they need to know.” 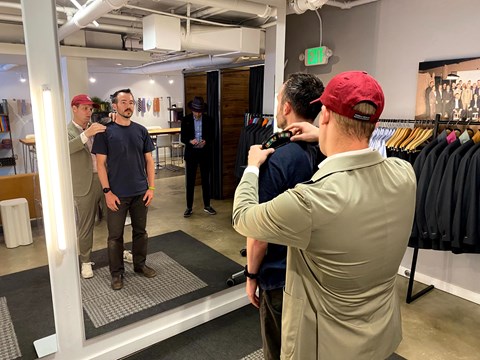