In a pie chart of California’s undocumented population, seniors make up only a sliver.

But this oft-overlooked group is now at the center of the Capitol debate over which, if any, undocumented immigrant adults should become eligible for public health insurance. The decision is based on the state budget, which could be finalized as soon as Friday.

As hopes for a broad coverage expansion fade, universal health care advocates are trying a piecemeal approach to get the whole state covered, one slice at a time. While young adults without legal status are likely to win out, the fate of seniors 65 and older hangs in the balance.

Out the gate, California Gov. Gavin Newsom has pushed to expand Medi-Cal, the state’s Medicaid program, to income-eligible 19 to 25 year olds, regardless of immigration status. It seemed like a compromise following two bills originally designed to cover all of the state’s low-income undocumented adults in 2020.

But in a twist last month, a Senate committee unveiled a budget closer to Newsom’s pitch, plus a little extra. It initially includes enough money to cover young adults up to age 25, with a rule that eligibility is extended by one year every year, so no one ages out. And it proposes covering undocumented seniors, making the group a point of discussion for the first time this session.

Rachel Linn Gish, communications director with consumer group Health Access and an organizer of the Care4All California coalition, said advocates are now focused on making sure seniors are included in the final expansion package.

“Young adults were coming up to us and saying, ‘This is great, but it’s really our grandparents that need the help,’” she said.

If comprehensive Medi-Cal didn’t require a Social Security number to sign up, just over 1 million more people would be expected to enroll, according to the UC Berkeley Center for Labor Research and Education. That number includes an estimated 104,000 young adults, and just 25,000 seniors.

There are a few theories on why the number of seniors is so small. Randy Capps, director of research for U.S. programs at the Migration Policy Institute in Washington, D.C., says it’s because most immigrants are younger, and simply haven’t reached their golden years yet.

“Absent any major immigration policy changes, that group will be significantly larger a decade from now,” he said. 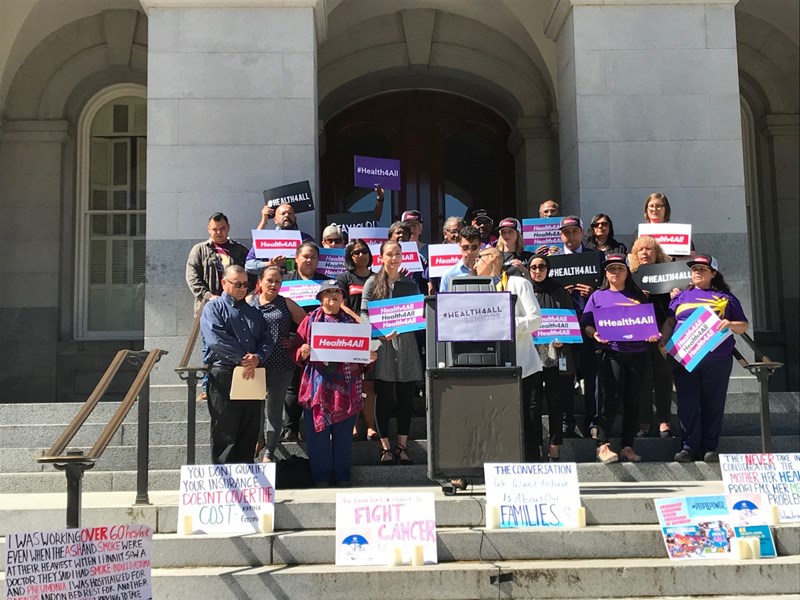 The Care4All coalition held a vigil at the Capitol last week for undocumented seniors. The group could become eligible for Medi-Cal under proposals being debated this week.Sammy Caiola / Capital Public Radio

David Hayes-Bautista, director of the Center for the Study of Latino Health and Culture at UCLA, says that by the time they become seniors, most immigrants have all their paperwork.

“They age in place here, which offers them opportunities to regularize their status,” he said.

But the path to citizenship is long and slow. Some seniors may end up dying before they can gain access to health care, especially if they’ve suffered from decades of physically demanding field work. Others opt to return to their home countries to seek medical care.

Fatima Garcia, a 30-year-old labor organizer in Sacramento, has seen both of these scenarios firsthand. In October 2013, her father — who worked picking cherries and asparagus for more than a decade before getting into landscaping — was diagnosed with stage 4 melanoma. His check-ups before that point had been so irregular that no one caught his illness, Garcia said. He died in December of that year.

And four years ago, her mother made the decision to return to Mexico for a better quality of life, and to get access to health care.

“It’s easier for them as they get older, to survive, than trying to survive here,” Garcia said. “They’ll be able to take care of (seniors) a little better there.”

But Garcia says her family has been torn apart, and her 13-year-old son feels the impact.

“Now we’re missing a grandma and those experiences, and being robbed by not being able to have a quality lifestyle here, because of our status,” she said.

Undocumented children in California have been eligible for Medi-Cal since 2016. Knowing that getting everyone covered will be a tough political play, various lawmakers have tried for smaller wins over the years. Last year, bills that would have expanded Medi-Cal to young adults and seniors didn’t make it to the finish line. This year, with Newsom in office, advocates are more hopeful.

But as of his May budget update, Newsom seemed firm about limiting who is eligible. His latest proposal includes $74.3 million in state general funds to cover young adults. The Senate budget proposal includes that, plus $62.5 million to cover undocumented seniors.

The cost of expanding Medi-Cal to all low-income adults, regardless of status, is roughly $3.4 billion.

“If you’re curious why I can’t include it … there’s 3.4 billion reasons why it’s a challenge,” the governor said last month, adding that the Legislature “may have new strategies, new approaches,” and that he’s willing to listen.

Beyond the price tag, there are concerns about adding more than a million patients to a system already saddled with a consistent backlog of patients awaiting treatment. Since Medi-Cal eligibility guidelines loosened in 2014, 3.8 million previously uninsured people have enrolled in the program.

But the supply of medical providers has struggled to keep pace with the demand for care, leading to long wait times and overwhelmed clinics. Current proposals to fix the situation include raising reimbursement rates for physicians taking Medi-Cal and incentivizing medical students to accept these patients once they get into practice.

“We have a Medi-Cal system, a health care delivery system that is completely dysfunctional in the state of California,” said Sen. Jeff Stone, R-Riverside County, during a lengthy floor debate last week. “What we pay our physicians to take care of the most vulnerable populations is still so substandard.”

The senator was speaking in opposition to SB 29, a bill that would expand Medi-Cal eligibility to young adults and seniors.

“There’s only so much money to go around, and we should be prioritizing those funds for people who are legally here in this country,” he added. “When we dilute our ability to take care of the less vulnerable who are already here, I believe we are doing a disservice.”

Seniors make up less than 5% of the low-income undocumented population in California. But this age group is more likely to have multiple chronic illnesses, and may require long-term care or skilled nursing facilities.

“As a population ages that really has had very restricted, if any, access to preventive and primary care, when they get older they’re going to have more serious conditions that haven’t been treated,” Capps said. 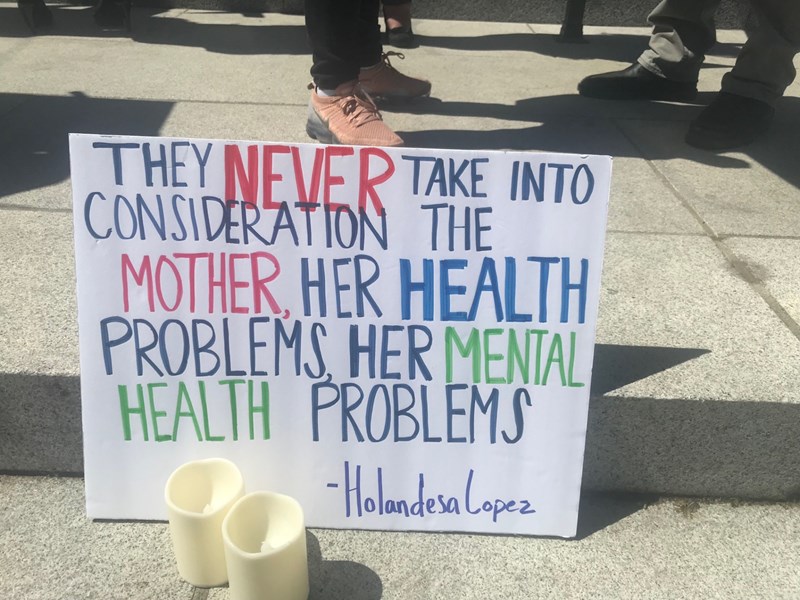 Signs on display at the Capitol during a vigil for undocumented seniors. Universal health care advocates are hoping this group will be included in budget discussions about Medi-Cal expansion.Sammy Caiola / Capital Public Radio

Expansion supporters say undocumented adults are already costing the system money when they show up at community clinics and in the emergency room, and that it’s more efficient to treat people on the front end.

Hayes-Bautista of UCLA said insuring younger immigrant groups, particularly working-age Latino adults, can help balance out seniors’ needs because they tend to be in better health than their white counterparts.

“That's precisely the population you'd want to get into an insurance pool to subsidize the elderly,” he said. “So you get, usually the parents of the Dreamers … people at 40, 50, 60 years old, they tend to be the ones who are working but not really able to access insurance very easily."

Lawmakers could finalize the budget as soon as Friday. California would be the only state to bring undocumented young adults, middle-age adults or seniors into the Medicaid program.