The Me Too movement precipitated a wave of legislation in California aimed at addressing sexual harassment in the workplace.

One of those laws requires nearly every public and private employee in the state to receive sexual harassment training starting next year.

But the law poses challenges for large institutions that have to quickly train huge numbers of employees — including state government agencies.

“What concerns me is the logistics of the Herculean effort to get 220,000 [state workers] trained,” said Eraina Ortega, director of the state Department of Human Resources, also known as CalHR. “Even a department with the highest level of commitment will have challenges.” 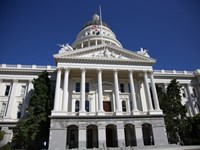 Existing law requires sexual harassment training for supervisors at businesses with 50 or more employees and all state agencies.

But a CapRadio investigation found dozens of agencies have failed to comply with this statute. Since 2016, the State Personnel Board identified 34 that failed to provide the training to nearly 1,800 supervisors.

Assemblywoman Laura Friedman, the Democratic chairwoman of the Subcommittee on Sexual Harassment Prevention and Response, says she’s concerned about the state’s ability to train hundreds of thousands of employees — "seeing that there seems to be a failure of training just supervisors.”

State Sen. Holly Mitchell, who introduced the law, was unavailable for comment.

Ortega says she’s most concerned about large agencies, like California Highway Patrol and the state Department of Transportation, that have many employees across the state.

“To be able to send them off to training at any time is a challenge … even with all intentions to getting it done as fast as we can,” Ortega said.

She says she’s optimistic it can eventually be accomplished — with the right resources in place.

The Department of Fair Housing and Employment is currently working on those resources and is in the process of developing training materials to ensure employers can meet the new requirement.

Department director Kevin Kish says it's an important opportunity to improve sexual harassment training for workers across the state.

“My hope is that the videos we’re required to produce will provide access to training, and that the training itself will be more effective than [existing] trainings,” he said.

Some studies, according to Kish, show traditional sexual harassment training can reinforce negative biases about its value, causing some people to take the training less seriously. He says he wants to include elements like bystander training, which helps people identify when others are being harassed and how to report it, in the resources being developed by his department.

“It’s very difficult to train people not to sexually harass,” she said. What’s more valuable is “the knowledge of what’s legal, what’s reportable and making sure … they feel relatively free from retaliation.”