Sacramento and St. Louis have been invited to submit formal bids for franchises as Major League Soccer's Board of Governors formally unveiled plans Thursday to expand to 30 teams.

The announcement is another  major boost to Sacramento and the Republic FC's bid to join MLS, following the City Council's approval of the team's plan to build a $252 million stadium at the downtown railyards site.

"It would have been very easy to walk away, or at least to say, you know, maybe it's worth putting our efforts into other things," Sacramento Mayor Darrell Steinberg said Thursday. "We stuck with it, and to be named loud and clear in that announcement this afternoon I'm very, very happy on behalf of this city. We are going to bring this home." 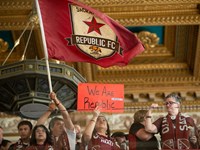 Commissioner Don Garber made the announcement at the board's meeting in Los Angeles.

"Professional soccer at all levels is thriving in the United States and Canada and we believe there are many markets that could support a successful MLS club," Garber said in a statement. "Expansion during the last 15 years has been enormously successful and a key driver behind the league's continued rise, and we are pleased that some of the top business and community leaders representing great markets in North America are aggressively pursuing MLS expansion clubs."

The league is currently at 24 teams, with FC Cincinnati joining the league this season. Nashville and Miami are teed up to start next year and Austin will come aboard in 2021.

The board did not identify markets that would receive teams but groups in Sacramento and St. Louis have been invited to give formal presentations to the league's expansion committee. A decision will be made in the coming months.

Sacramento's hopes of landing a team were boosted in January when billionaire Ron Burkle became the new lead investor in the Republic FC . The team currently plays in the second-tier United Soccer League.

Burkle is a co-owner of the NHL's Pittsburgh Penguins with a net worth estimated at $2 billion by Forbes magazine.

Bids are likely to include final stadium plans, commitments of corporate support, composition of ownership groups, details about funding, as well as plans for player development, fan engagement and community programs.

It has not been determined when the new teams will join the league. MLS has set an expansion fee of $200 million for the league's 28th and 29th teams. A fee has not been set for the 30th franchise.