Just blocks away from the home where police shot and killed 22-year-old Stephon Clark last March, Sacramento Mayor Darrell Steinberg said he struggled to find the right words for a still-grieving neighborhood.

Stephon's brother Clark Stevante sat in the second row at the speech, and afterward responded to the mayor’s speech.

Clark has been calling for economic equity since his brother’s death. Now, he’s expected to be nominated to a city commission that will advise how to spend revenue from Measure U, the city sales tax increase approved by voters in November.

In his speech on Tuesday, Steinberg vowed to use those funds to lift up neighborhoods that historically haven’t seen city investment. He also talked about achieving community justice through police reform.

Clark said an apology to Meadowview was much-needed, adding that holding the speech in their neighborhood was a step in the right direction.

“Meadowview is still being ignored in a large scale,” he said. “So, I think this is a good way to shed light on the problems around here.”

He says justice for his brother is more than disciplinary action for the officers. It’s resources and after-school programs for Meadowview, Del Paso Heights and other neighborhoods where he says kids have limited opportunities for success. 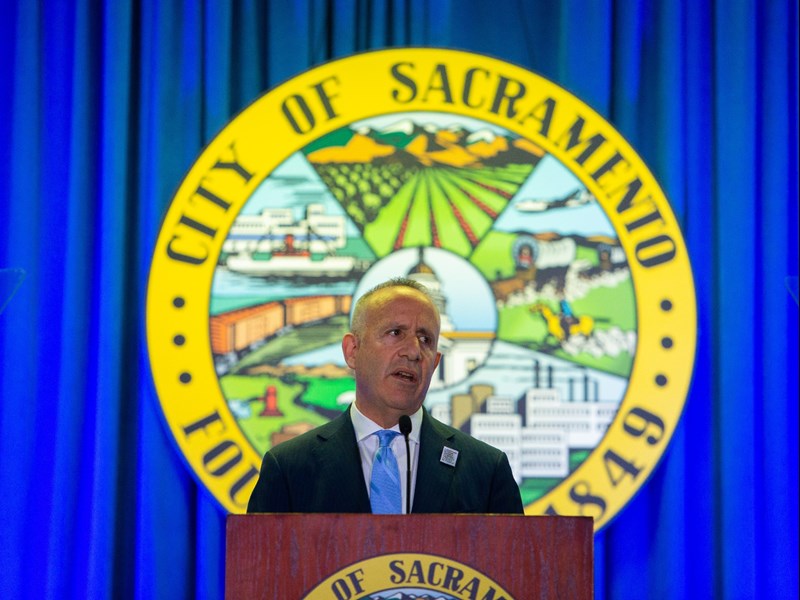 Mayor Darrell Steinberg at the State of the City address in Meadowview on Feb. 19, 2019.Andrew Nixon / Capital Public Radio

The mayor’s apology comes at a tense time: — the Clark family and residents await the Sacramento district attorney’s decision on whether to charge the officers who killed Clark. The family filed a wrongful-death lawsuit in federal court, blaming the city of Sacramento for the shooting.

Steinberg spoke to the looming decision by the DA. “I do not know what the district attorney and the attorney general will decide over the days, weeks or months ahead,” he said. “If they decide not to bring criminal charges based on the existing state law, I know that there will be real anger about such a result. And so, what is the state of our city’s relationship between our men and women in uniform and the communities, especially the communities of color they are sworn to serve?”

He says Sacramento is leading the way on improving police protocols such as body camera requirements, transparency and using foot pursuit only as a last resort.

After the speech, Sacramento Police Chief Daniel Hahn said some officer-neighborhood relationships aren’t “where we want them to be.”

“There are certain communities in our city that don’t have the trust level that we’d hope for,” he said. “We have to work hard to build those. And we need to be introspective to look at ourselves to see what changes need to be made … for us to reach our full potential as a city.”

Last month, the California Department of Justice recommended more than 60 reforms for the Sacramento Police Department based on a review brought on by Clark’s death.