Update: Covered California released its final report Feb. 1, which did not change significantly from the draft report. Find the full report here.

State lawmakers are expected to receive a first look Friday at the costs tied to an ambitious plan to provide health insurance for more California residents.

The report represents California’s response to the Trump administration’s retreat on the Affordable Care Act, analyzing how to provide more generous consumer subsidies to pay for costly health insurance, subsidies for insurance companies and a state penalty on residents who fail to maintain health coverage.

Consumer advocates have warned for months that lawmakers need to act.

The federal government’s repeal of the ACA’s tax penalty has made it easier for more than 300,000 California consumers to flee the individual insurance market, including as many as 250,000 insured through Covered California, according to estimates by the California Association of Health Plans. As fewer people sign up, premium costs are expected to soar for those who remain in the market.

Already, Covered California is reporting losses in its latest enrollment figures, which showed a 24 percent drop in the number of new enrollees compared with 2018.

The report to the Legislature is an early roadmap that could guide policy decisions and efforts to ensure the insurance offered on the California exchange remains affordable. But it will likely come at a hefty price, which may figure prominently in the hearing lawmakers are expected to hold on Feb. 12.

Covered California officials declined to comment on a draft version of the document reviewed by the USC Center for Health Journalism Collaborative.

At its heart, the report seeks to find a way to help people like Celia Green stay insured through Covered California. A 56-year-old executive assistant living in Sacramento, Green first signed up for a policy with Kaiser Permanente in late 2016 for about $650 a month, she said. She saw the price rise the next year as her husband’s pay increased even though she worked part time. As her family’s income went up, the value of her subsidy declined.

When the monthly premium jumped yet again last December to around $1,240 a month just for her, Green decided to leave the exchange and joined her husband on his employer-based coverage, she said.

Among those the subsidies could help are older adults living in high-cost parts of the state who can pay more than 30 percent of their income just for premiums for the most common plans, the report states.

Laurel Lucia, a health care expert at the UC Berkeley Center for Labor Research and Education, said the state is poised to make broad-scale changes that could lower costs for California families.

In his first budget proposal, Gov. Gavin Newsom recommended expanding Medi-Cal eligibility for undocumented young adults ages 19 to 25 at a cost of $260 million. Two bills introduced the first day of the legislative session, meanwhile, propose to expand Medi-Cal to all otherwise eligible undocumented adults, regardless of age, with an estimated $3 billion price tag. 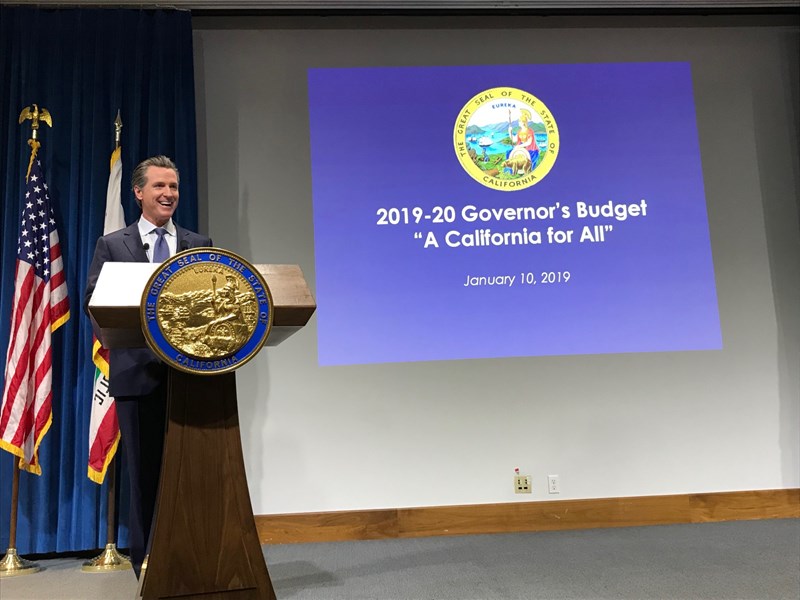 “These numbers are especially important at this point in time, because of the great interest among legislators and the governor in getting to universal coverage,” she said. “But also, because the loss of the federal individual mandate penalty makes it more urgent that we look at ways to counteract that.”

The draft report breaks potential solutions into two schools of thought. One approach strives to make health coverage more affordable for as many consumers as possible and the other takes a more piecemeal approach, assuming budget constraints and targeting specific populations.

The price tags mirror the ambitions of each plan.

The report estimates that the most expansive and generous plan will cost the state an additional $4.2 billion annually and cover as many as 764,000 more people for that sum. A portion of that hefty sum would be defrayed by $1.1 billion in federal funding to help insurance companies contend with costly high-risk patients.

The least expensive, and modest, of all the options would cost $215 million annually and insure an additional 27,000 people.

Several policy options emerged from the report. They mix and match the amount of money dedicated to reducing premiums for consumers and for cost-sharing subsidies to shield insurance companies facing hefty bills from high-risk patients. The plan also weighs whether dollars collected from a potential new state tax penalty for those who fail to buy insurance could be used to defray the cost of more generous subsidies.

One provision projected to cover an additional 478,000 people would expand financial support to households with an income of up to 600 percent of the federal poverty limit. That could mean a family of four with an income of as much as $150,000 could be eligible for a subsidy. The current subsidy cutoff for the same family is just above $100,000.

In some parts of the state, like Los Angeles and the Bay area, incomes can quickly be gobbled up by rising housing costs, making it all the more difficult to pay high health care premiums.

“The subsidies under the Affordable Care Act aren’t adjusted for cost of living, and in a lot of parts of the state there’s not a lot of money left over for people in their household budgets to pay for health care,” Lucia said.

California’s slow march toward universal coverage is not without its skeptics.

The state already commands the largest exchange in the country and has expanded Medi-Cal eligibility for undocumented children. As a result, since 2013, California has seen the biggest decline in its uninsured rate of any state.

Still, none of the policies outlined in the Covered California draft report would target the 1 to 1.5 million non-citizen adults estimated to be among the state’s uninsured. While anyone can buy health insurance, undocumented adults in California currently receive no subsidies or access to low-income programs.

Some health policy experts, like Lanhee Chen, a fellow at the Hoover Institution and professor at Stanford University, wonders if more subsidies will ever be enough. Chen said government subsidies have their limits and the real issue is the lack of transparency around the rising cost of health services.

“Obviously, the affordability issue is front and center for many Californians, and the notion of trying to subsidize or assist with the cost of health premiums is laudable in spirit,” Chen said.

“But the idea of simply subsidizing people or creating more prescriptive government policies really ignores the fundamental factors that are driving up health costs in California and around the country.”

A number of state hospital, insurance and consumer advocacy groups embraced the report’s findings, but each constituency has its own priorities.

“This is not just a multiple choice — choose one. You can also have combinations. This is more like a buffet,” said Anthony Wright, executive director of the consumer advocacy group Health Access California. “We support (many) of these options. The question is, what can we get done this year?”