CapRadio reporters Nadine Sebai and Ben Adler talk with Jerry Brown before getting into an ATV to tour the outgoing governor's Colusa County ranch.

This is the final installment of Capitol Bureau Chief Ben Adler's exit interview with outgoing California Gov. Jerry Brown. Click here for more from the discussion, including photos, video and Adler's full interview with the governor.

In the rolling foothills of Colusa County, about 70 miles northwest of Sacramento, a newly-built gate marks the entrance to a gravel driveway, with a sign: Mountain House III. This is the place Edmund G. Brown, Junior, now calls home. And on a bright, brisk Saturday morning right before Christmas, he climbs out of his CHP car with California’s First Dogs: the smaller Colusa, a Borgie, and the larger Cali, a Bordoodle who comes bounding up.

After a record four terms leading the Golden State, Brown hands the reins over to Governor-elect Gavin Newsom Monday. California’s oldest and longest-serving chief executive is leaving the governor’s mansion in Sacramento for his family’s ranch — which he’s transformed from empty land with decaying barns to a modern, inviting estate.

The 80-year-old governor is not one for small talk. As we walk toward the new home he and First Lady Anne Gust Brown built, I ask him if he likes the cold weather here.

What about the spring and the summer and the fall? How about the night and the day?

Just as he quotes Latin proverbs and obscure historical references, this, too, is vintage Jerry Brown: challenging every question and premise.

Do you like the fall better than the spring?

You really do. You actually have a preference.

I actually have a preference.

Now I find that completely absurd…

We go inside and sit in a wide open room with a fireplace, dining area and kitchen. Besides the great room and a small office, it’s one bedroom only. Others stay at the guest house a short walk away. The fresh scent of wood filled the air.

I'd like to start with the elephant in the room — or the elephant on the ranch, you might say — which is that you do hate the word legacy.

When you talk about remembering, I'm thinking of obituaries and I'm not ready to write that yet.

Besides, Brown argued, governors are far too busy dealing with the state’s business to focus on what historians will think. He calls it a “lazy journalistic trope.” He does, however, name one of his accomplishments he feels will leave an impact. It has nothing to do with governing.

I would say restoring this ranch, Mountain House III as I am calling this place, this residence, this building, and the restoration of the barns. That's something. Because this is a ranch that my great grandfather came to. He wanted to want to be an innkeeper. And it was an inn, it was a hotel and a stagecoach stop. And he left because of the floods, and he left because of the mosquitoes. It was in disuse for 50 years — more than 50 years. Only the cows wandered where we're now sitting. So to be able to bring this back to life and have people, and olives producing olive oil, and parties and kids and dogs, it has a life to it. And I would say that re-inhabitation might be called a legacy by those who come after me. That's all. And I'm saying, I don’t think governors make much history. I think maybe generals make history, or a historian, or poets, or novelists.

Later, we head outside and hop in a golf cart to check out the ranch.

We leave the main house. A couple hundred yards to our right is the guest house, built up against a hill.

Cali and Colusa are riding shotgun… 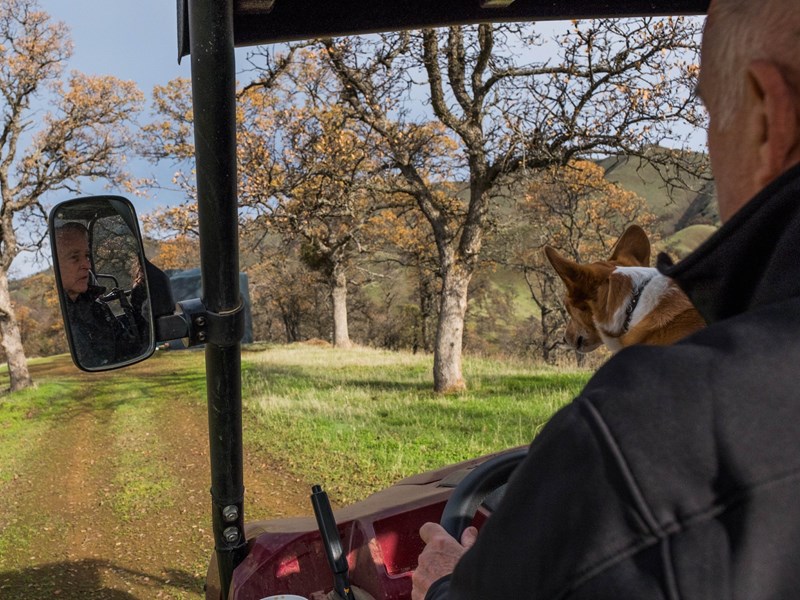 We see a pair of cottages barely big enough to hold a couple of twin-size cots, and then barns used for storage and entertainment. We also pass a Bocce ball court, several picnic tables, and the solar panels that power the entire ranch.

So these two barns were here…

They were here. These two barns and the other barn. These three barns have been here a long time.

But they didn’t look all this nice when you came back to start you work on them.

No they didn’t. They had graffiti, all over it. This one is an outhouse, which we painted. That’s been here for over 100 years. That’s an historic outhouse! 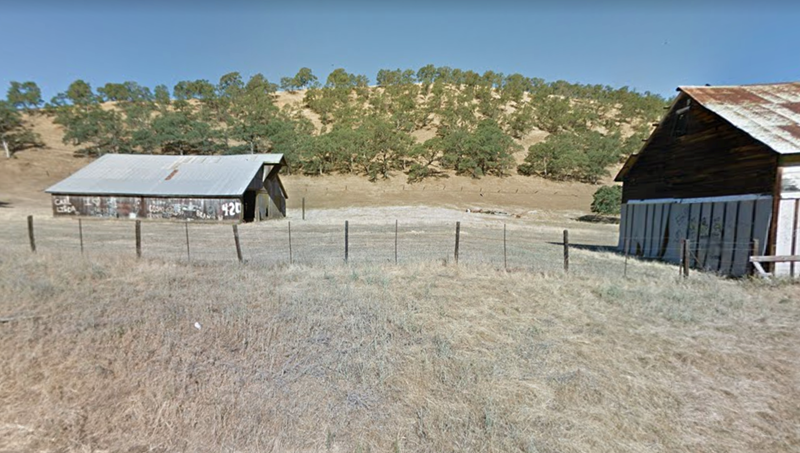 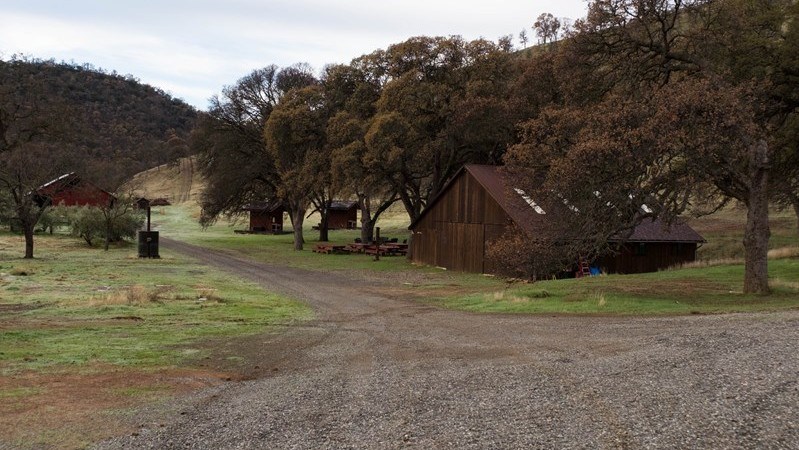 On the left, an image from Google Streetview showing barns at Jerry Brown's Colusa County ranch in 2012, before he started making improvements. On the right, a look at the property today.Google Streetview | Andrew Nixon / Capital Public Radio

We get to the top of the hill and climb out to look around at the foothills that surround us. It’s rained enough recently that the hills are more green than brown. Cali and Colusa romp around, in sheer heaven.

It’s a very different life than the life you’ve led over the last couple of decades. A different change of pace. So what makes you want it?

Well, one day I was talking to my Uncle Harold, who was my father’s brother. And he always said, you know, I made a mistake — I should’ve been a farmer. And he liked this land, he knew the history. So I thought, well, there’s something about that, going back to the land. And at some point, I came across that picture of my great grandfather, August Schuckman, with his white beard, feeding the sheep and chickens around. And I was, ‘Now that’s not a bad place to be when one is 80.’ So that’s what I did.

And you’re gonna buy a car, do your own grocery shopping…

It’s a Pacifica. A hybrid. Electric.

You’ve said you’re not having a retirement, you’re having an active…

No, because there’s a lot — first of all, this ranch has got lots to do, just learning how to make that olive oil, finding out when to pick it, how much water to use, make sure it doesn’t get diseased. That’s a big deal.”

He also mentions his leadership role with the Bulletin of Atomic Scientists, the organization responsible for the Doomsday Clock. 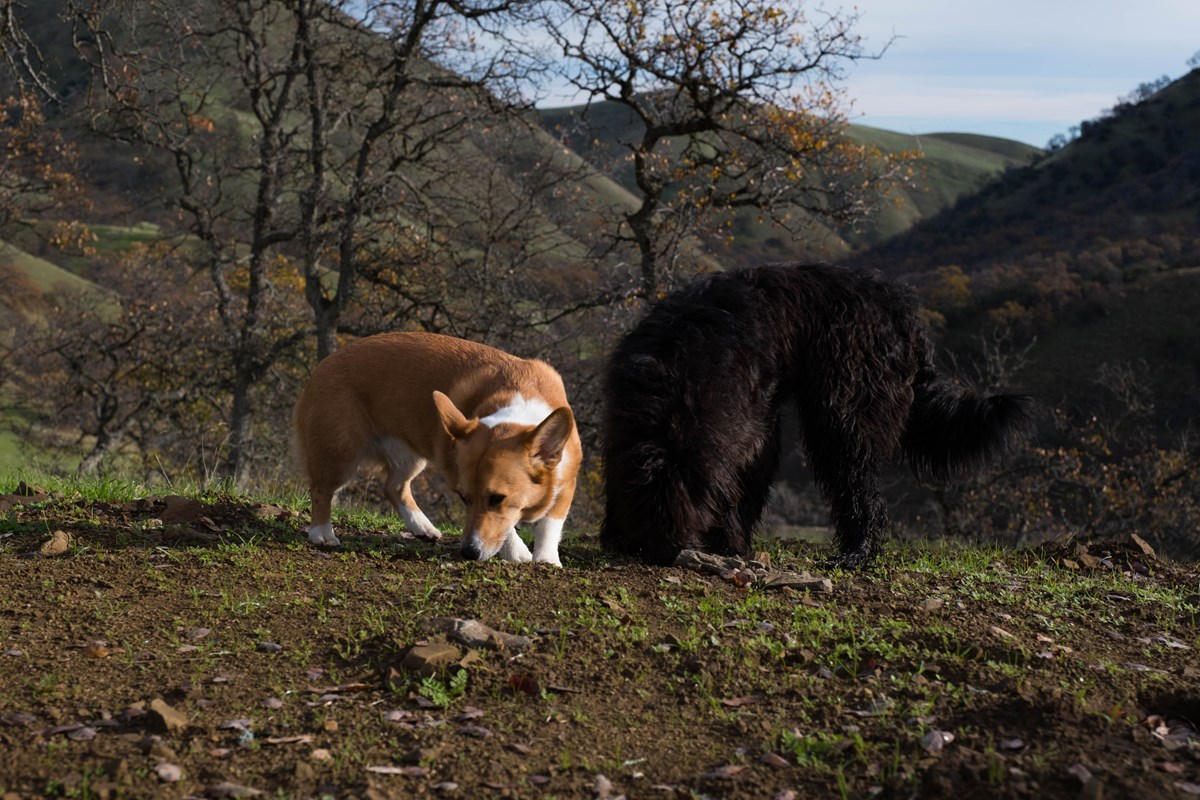 We hop back in the golf cart and the governor drives us down the other side of the hill, heading back toward the house.

Is your political career over? Or Colusa County supervisor?