After he concludes his historic run next month as California’s longest-serving governor, Jerry Brown will retire to a rural patch of the north state, a rugged region of ranchers and Republicans whose vision for California couldn’t be more different from his own.

Brown has lost Colusa County every time he’s been on the ballot. The region covered in almond and walnut orchards, rice fields and cattle ranches is so fed up with Democrats’ grip on state government that it has officially declared a desire to secede from California—an aspiration plastered on the “State of Jefferson” billboards that dot the landscape.

The women drinking beers after work at a small steakhouse in Williams, an hour north of Sacramento, don’t have anything nice to say about Brown. Neither does the man in an antique shop selling garden gnomes. Even Jeff Gilbert, the small town fire chief who has befriended Brown in recent years, readily admits: “Myself, I never voted for him. I didn’t always agree with a lot of his politics. But that’s our rights, I guess you could say, our rights and beliefs.”

Brown is settling in the foothills west of Williams on property that’s been in his family since the 19th century. He’s returning to the roots put down by his great-grandfather August Schuckman, a German immigrant who ran the Mountain House inn along a stagecoach route that connected Williams to a smattering of hot springs. 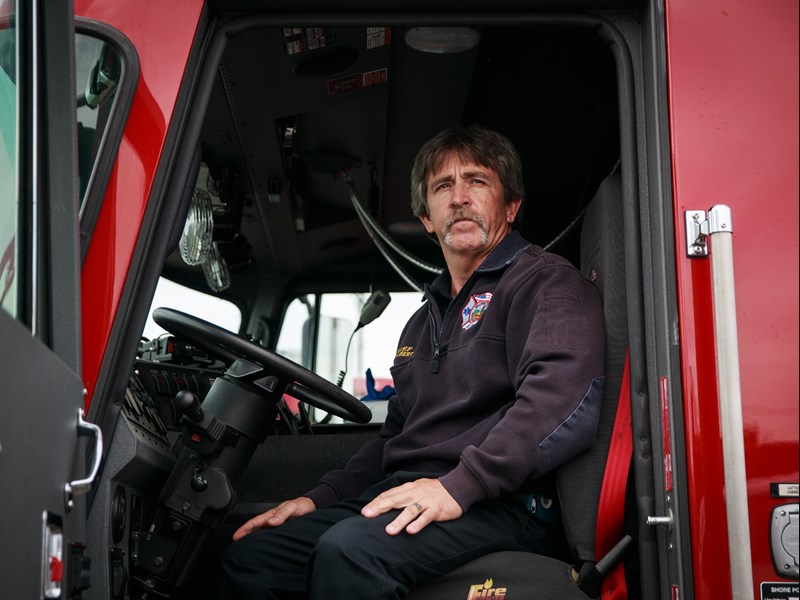 “People are like, ‘Oh jeez what the heck is he doing here?’” says Williams Fire Chief Jeff Gilbert. “I tell them, ‘You know what? He’s no different than anybody else.’”Max Whittaker for CALmatters

Rebuilt in the early 1900s by a Schuckman son, the inn burned down decades ago, leaving just remnants of outbuildings. Now Brown and his wife Anne Gust Brown have built a new home—run entirely on solar electricity—on 2,500 acres where rattlesnakes bask in the sun and wild pigs roam the rolling hills. A handsome gate across the entrance declares it Mountain House III.

Brown has made clear in recent years that he finds deep meaning in reconnecting with his family history, even naming his dog Colusa after the county where his forebears established the ranch, and where many of his extended relatives still live. Schuckman’s immigration story, including his wagon ride across the Great Plains, is a frequent theme in Brown’s speeches. The governor talks wistfully about the land where, as he put it in a speech last year, his grandmother “was born in very modest circumstances.”

That Brown is retiring here after 80 years of big-city living is largely a reflection of his own idiosyncrasies. Reared in the liberal cities that have defined California’s progressive bent—he grew up in San Francisco, spent formative years in Los Angeles and was the mayor of Oakland—Brown’s esoteric passions have also included stints at a Jesuit seminary, a Zen meditation center and Yale law school. In his 50 years in politics, Brown has likely spent more time campaigning for president and hobnobbing at international climate summits than muddying his boots on the family ranch. His father brought him there only once before he died in 1996. 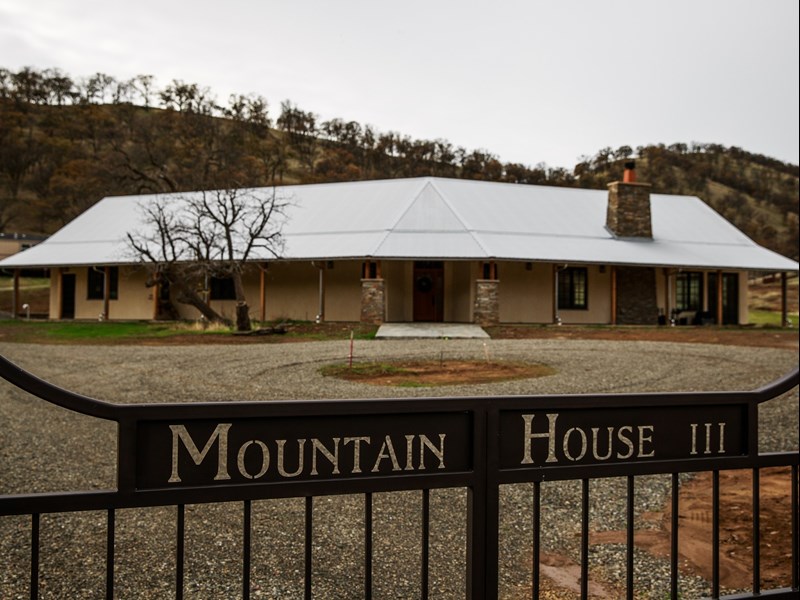 But it also says something about California—a vast nation-state with coastal cities fervently pushing a high-tech future and a rural core proud of its agrarian past. Brown’s retirement may show that differences don’t have to mean divides. He’s the unusual Californian who has a foot in both worlds.

Brown admits that he was booed at a local rodeo, but says he generally gets along well with the community, even welcoming visitors who stop by the ranch when they see him sipping a glass of wine outside his barn.

“They are very friendly people, when they’re not in a crowd,” Brown said. “I know more people on Leesville Road (where the ranch is) than I do on Skyline Boulevard in Oakland.”

Locals note, with more than a hint of snark, that the pockmarked road to Brown’s ranch recently got a smooth new coat of asphalt. State and local officials said it was a county project that had been in the works for a long time.

As their retirement home has been under construction the past few years, the Browns have hosted their extended family for barbeques, said his second cousin June O’Sullivan. “Then he and Anne’s friends come up, and they sleep in tents.” 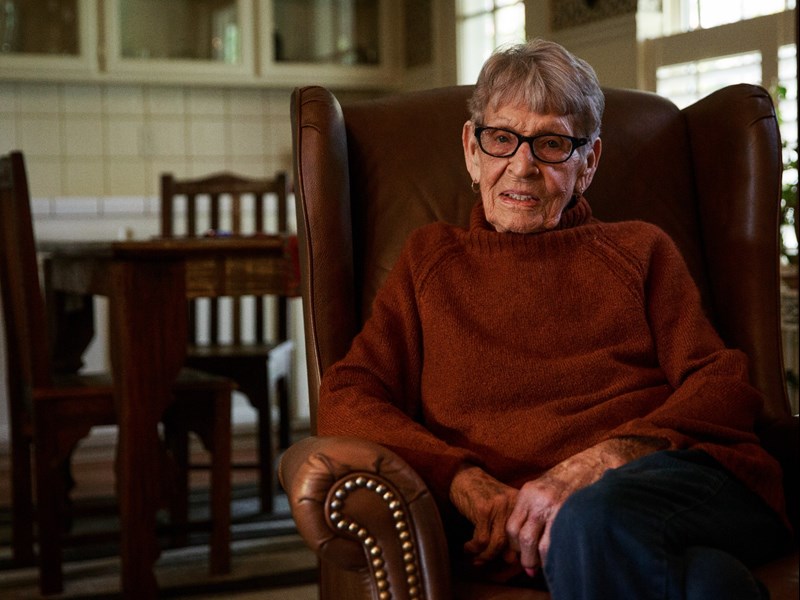 June O’Sullivan, Jerry Brown’s second cousin, says he has hosted family reunions at the ranch. “Then he and Anne’s friends come up, and they sleep in tents.”Max Whittaker for CALmatters

They have also befriended Gilbert, the Williams fire chief, who said he’s inspected their construction, collected their development fees and held a firefighting training on their property. He said the governor called him four or five times a day this summer as wildfires roared some 15 miles from his home.

And the Browns have become regulars at the annual steak and scampi dinner that raises money for Gilbert’s mostly-volunteer fire department—though he said many of the GOP attendees weren’t too happy to see them show up.

“People are like, ‘Oh jeez what the heck is he doing here?’” Gilbert said. “I tell them, ‘You know what? He’s no different than anybody else. He’s just another person. And that’s the way you need to treat him.’”

At the raffle one year, Gilbert said, “Anne won a nice shotgun.”

Still, Brown’s decisions as governor anger many residents here. They grumble about taxes and water and a high-speed train. His signature on criminal justice bills may have left the most indelible mark, as evidenced by the emotional throngs who showed up this fall at a resentencing hearing in the Colusa courthouse.

At issue was whether Nathan Ramazzini, who had served 20 years of a life-without-parole prison sentence for killing his friend when both were teenagers in Colusa in 1997, would be resentenced and allowed to apply for parole. The option of a lesser sentence was the result of a law Brown signed six years ago that allows judges to downgrade the sentences of offenders who were convicted as minors and have served at least 15 years of a life sentence.

In the end, the judge decided against a lesser sentence for Ramazzini, so he remains in prison. But family and friends of the boy he killed were furious that they had to re-live the murder during the resentencing hearing.

“(The family) should never have had to sit in the courtroom again, and hear all of the horrid details,” said Lisa Selover, whose son was close friends with the murder victim.

She and others impacted by the killing have lobbied Brown not to sign bills they see as too soft on criminals and lacking compassion for victims. But Brown has signed several of them, part of his own political evolution trying to un-do some of the tough-on-crime policies he embraced in the 1970s in favor of a more forgiving approach that also complies with a court order to reduce the prison population.

“Because he’s passed some of these laws and done things that go against what we believe in, the hubbub around town is (we) don’t want him here,” said Selover, a Republican who owns a local auto body shop. 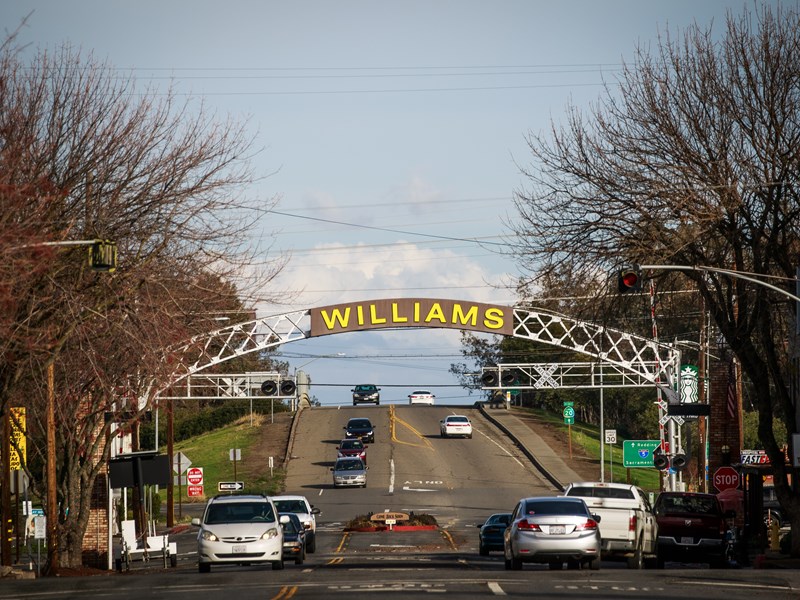 Brown is quick to point out that his father, former Gov. Pat Brown, was the last Democrat to win Colusa County, when he ran against Richard Nixon in 1962. The county hasn’t had a Democratic club in more than 20 years.

Local Democrats teamed up last year to form a Colusa County Democratic committee, and they fully expect Brown to participate.

“I don’t think you can spend that much time in government and then just pull back and not do anything,” said Pat Ash, a former mayor of Williams who is part of the committee.

The depressed town center could get a spark of new energy if Brown winds up establishing a family library there, as he’s told some locals he’d like to do. Ash said Brown has already begun making a difference, beefing up the annual Pioneer Day parade this summer with fancy fire trucks and bulldozers.

“I called him and said, ‘Jerry, thank you so much for all that you did to contribute to our Pioneer Day,’” Ash recounted.