Amid jeers, heckling and supportive applause from a capacity crowd at Tuesday’s Board of Supervisors meeting, Sacramento County Sheriff Scott Jones made his case for blocking Inspector General Rick Braziel from overseeing his department.

“It’s a giant leap backward for democracy when you strip elected officials of their discretion,” the sheriff told supervisors at the afternoon meeting. “No other sheriff’s department in the state has oversight that is being contemplated here.”

After more than five hours of discussion, supervisors voted unanimously to continue working on a plan that would give them authority to ask the inspector general to conduct investigations.

The board also agreed to draft an agreement with the sheriff that would permit the inspector general access to deputy shooting scenes and department facilities.

Jones has tried for months to stop Braziel — who independently investigates agencies and is sometimes referred to as the county's watchdog — from entering his officers or interviewing his deputies and employees.

The county counsel has ruled that Jones has the authority to prevent the inspector general from access, but supervisors have pushed to retain the power to oversee the department.

The sheriff’s effort started after Braziel put out a report in August that criticized the deputies who fatally shot Mikel Mcintyre in Rancho Cordova last year. Braziel wrote that they shot “excessive” rounds and put the community at risk when they fired several rounds at McIntyre near Highway 50 and in a shopping center parking lot.

Jones’ response to the report was to bar Braziel from interviewing his employees and entering the Sheriff's Department. The Sacramento County district attorney reviewed his office’s investigation of the incident and called the shooting “lawful” in a report last month. 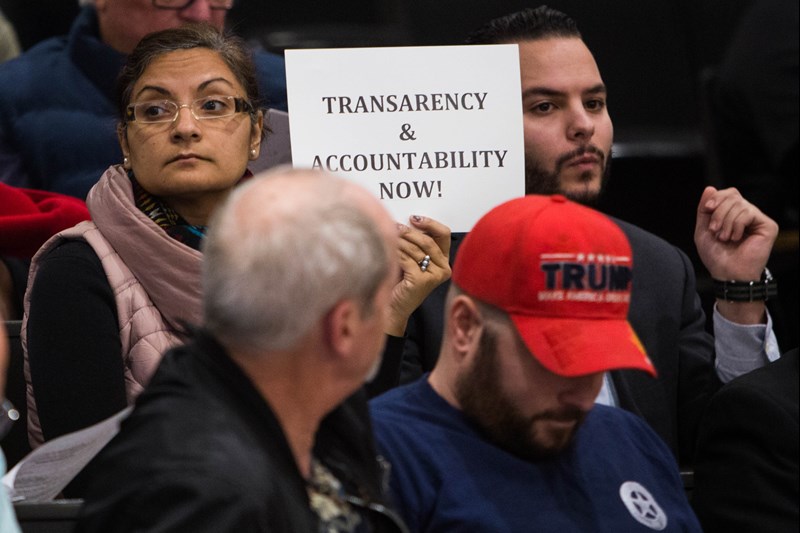 A protester holds up a sign at Tuesday’s Board of Supervisors meeting.Andrew Nixon / CapRadio

On Tuesday, Jones was defiant and accused his critics of playing politics. “I can’t help but wonder where are we falling short?” he asked of his department. “Or maybe it’s just me? Or maybe it’s political? Or maybe it’s both?”

Former sheriff John McGinness spoke in support of his chosen successor Jones, and questioned whether the inspector general position was still impartial and independent.

“The trust in this relationship has broken down,” McGinness said.

Supervisor Phil Serna, who has been vocal in his criticism of Jones during previous meetings, called the sheriff’s decision to block Braziel “a test,” to which he wanted to focus on solutions.

“We’re here today to talk about how to get a point where we don’t have to have this meeting again,” Serna said.

He motioned to draft a memorandum of understanding between the board and the sheriff that would allow the inspector general access to interview his deputies and department.

Supervisor Patrick Kennedy introduced an updated version of the inspector general job description, which is also called the scope of services. He said county staff looked at other communities, reached out to residents and cultivated ideas from fellow supervisors in the new draft.

Kennedy insisted, though, that Braziel and future inspectors general retain the authority to serve as a watchdog. “I think that that independence is vital,” he said.

Dozens of speakers criticized Jones and argued in favor of an independent investigator to keep tabs his department.

Tanya Faison with the local Black Lives Matter chapter accused the sheriff of a litany of wrongdoings, including excessive use of force and a lack of transparency. “The sheriff’s department has refused to release requested information to the families of people that their deputies have killed and abused,” Faison said of the department’s unwillingness to investigative records available to the public.

Her remarks come after Jones released department video footage on Monday from the death of Marshall Miles, who died at a hospital on Nov. 1 after losing consciousness while being booked at county jail.

The videos show several deputies atop Miles during a struggle at the jailhouse. They tie Miles’ hands and feet behind his back and move him into a jail cell, where he eventually was found unresponsive.

Faison said the incident justifies the need for an inspector general. “They did not get [Miles] medical help, but instead deputies piled up on top of his upper body, causing him to die while in custody,” she said. 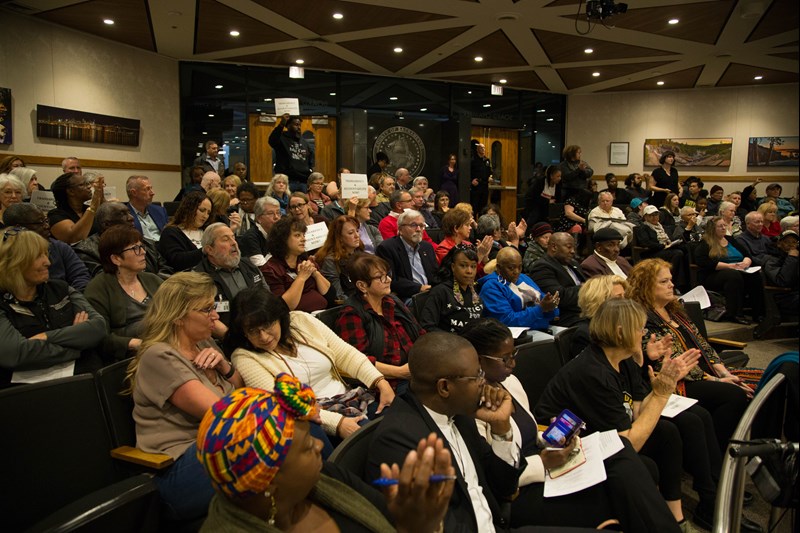 The crowd listen to as Tanya Faison of Black Lives Matters Sacramento speaks at Tuesday’s Board of Supervisors meeting.Andrew Nixon / CapRadio

Eli Roth, a semi-retired attorney who says she was one of Jones professors at Lincoln Law School, said the sheriff is on the wrong side of this issue.

Other speakers at the meeting supported the sheriff. Jim Lightfoot said the supervisors are making a power grab. “If the appointed sheriff was appointed because of his qualifications, I see no need for any outside entity to inspect or overlook,” he said.