Doctors Want To Prescribe Nature To Communities Of Color. Here's How California Might Help.

Angelica Ramón cajoles her nearly 3-year-old, Samiel, in Spanish as they trek up a hill at Sugarloaf Ridge State Park. He’s a dedicated — but distracted — hiker, often pausing to pick up a leaf or stumbling over roots while staring up at the sky.

Today, the mother and son have to keep up with the group during a guided nature walk. Ramón lives in Santa Rosa, just 20 minutes away. But she says she and Samiel didn't get out much before they found this program.

“Sometimes we don’t understand English. We are afraid to go camping because we don’t know how to do it and how to communicate with the staff,” she said. “We don’t know about the park, the rules.”

Now, she attends the monthly Spanish-language walk with other parents from a Santa Rosa resource center called Via Esperanza. It's led by the Sonoma Ecology Center, one of a handful of California nonprofits promoting diversity at state parks. Advocates say this is key to improving health among groups that don’t typically get outside.

They also want it to remain a priority as the state decides how to spend funding from Proposition 68, a parks bond passed this past June. That’s because language is just one barrier to the outdoors: fees, transportation, or busy work schedules can make a day in the wilderness seem impossible for low-income families, as well.

California State Parks doesn’t collect data on visitor demographics, but the most recent statistics available — a National Parks survey from 2009 — found that roughly one-third of Hispanic and African-American respondents had visited a park in the last two years, compared to more than half of white respondents.

Experts say this has major implications for health, and that kids who get outside the least have the highest rates of chronic diseases such as asthma, diabetes and obesity.

Dr. Nooshin Razani at UC San Francisco is part of a growing group of researchers who believes getting children from underserved communities into green spaces could reverse those trends.

“We see two crises happening at the same time: We see an environmental crisis, and we see a crisis in pediatric health,” she said. “We need to create environments that sustain flourishing lives. It’s the same battle.”

The back wall of Holly Martinez’s downtown Sacramento office is plastered with a large, glossy poster that reads “Our Parks, Our Future.” It’s a nod to a new social media campaign encouraging all Californians to get out and experience the beauty of nature.

Martinez, the director of programs and advocacy for the nonprofit California State Parks Foundation, said she envisions a day when park visitors — and even staff —represent the many types of people who live in the state. That’s why she wants equity to remain on the table during discussions about Prop. 68 spending.

“We need to work really hard to make sure that this money isn’t gone to waste,” she said.

The measure, which 57 percent of voters approved during the June primary election, puts $4 billion in bonds toward parks, environmental protection and water infrastructure projects. Between 15 and 20 percent of bond funds must go to low-income communities, and $725 million is set aside for new green spaces in “park-poor” neighborhoods.

But Martinez said infrastructure is just one piece of the puzzle, and the state needs to create more educational programs for racially and economically diverse families, such as the Sonoma Ecology Center’s Spanish-language walks.

“The idea that if you build them people will automatically use them and enjoy them is a misconception,” she said. 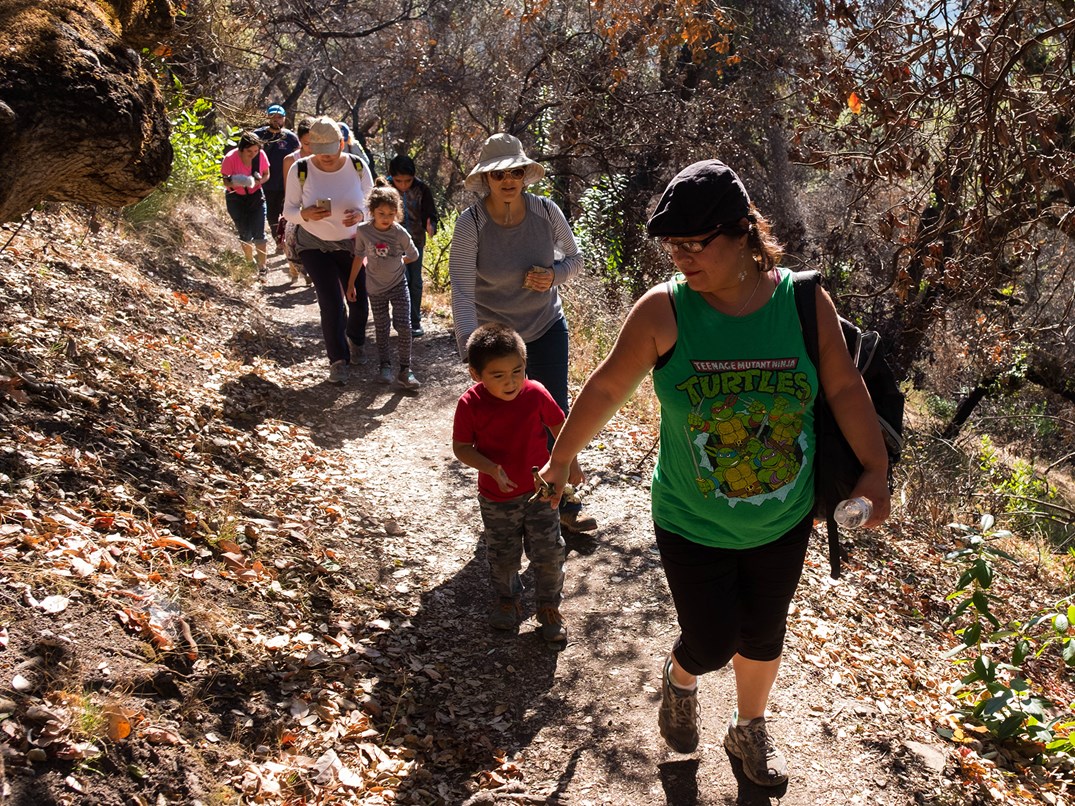 Martinez’s foundation just gave nearly $130,000 to the center and nine other groups launching nature programs for underserved youth. One of them is Outdoor Afro, an Oakland-based nonprofit with the motto “where black people and nature meet.”

Rue Mapp, their executive director and vice chairperson of the California State Park and Recreation Commission, said some African-Americans have an uncertainty about the outdoors that dates back to the age of slavery.

“We have some real fears, and a legacy of that fear that we carry in our bodies, that let us know that going out in the wild by ourselves isn’t about encountering wildlife,” Mapp said. “It’s about encountering another human being who might harm you. So, we do have some healing and atonement that needs to happen around that reality.”

To change the narrative, they’ve been working to incorporate black history into state parks. For example, they asked the docents at Marshall Gold Discovery State Historic Park to educate visitors about the African-American Monroe family that owned land in the area during the Gold Rush.

Mapp said even the design of parks can make it hard for families of color to feel at home.

“For instance, for a multigenerational family that likes to picnic,” she said. “Average picnic sizes assume that a family is four people, and that a grill is only going to be used for hot dogs and not a slab of ribs.”

These programs are mostly supported by private funding. Two bills that tried to draw state dollars for this purpose failed this year. One would have established an outdoor equity grant program for low-income students, foster youth and students with limited English proficiency. The other would have created a grant program for innovative transportation projects that give low-income youth access to the outdoors.

At Sugarloaf Ridge State Park, bilingual educator Alana Fichman rubs the green leaves of a shrub between her fingers. She explains to the group, in Spanish, how the plant sprouted back after the 2017 fires scorched its foliage and the surrounding terrain. She smiles as she says the new life inspires “esperanza,” or hope.

“It always feels really peaceful,” Fichman said of the monthly walks. “And I’ve had people be really grateful to be outside, and just enjoy watching their kids run around.” 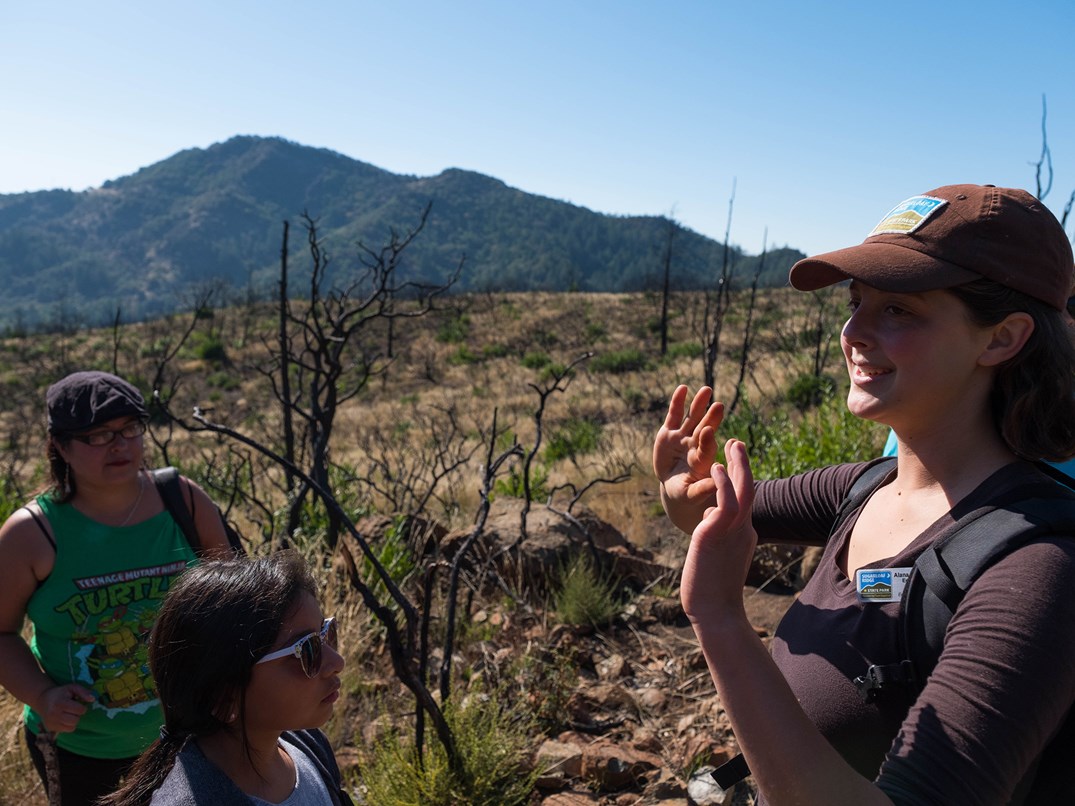 American children don’t play outside, ride their bikes, or even walk as much as they did a few decades ago, research indicates. Some are held to tight parental restrictions that became the norm in the digital era. Others live in neighborhoods where parks and playgrounds can be hotbeds of crime.

Families on the Sugarloaf walk said it’s a constant battle to get their kids away from YouTube and video games. It’s a common problem: The average white child in America spends eight hours in front of a screen every day, according to the latest major study in 2010. Black and Hispanic children spend roughly 13 hours. Experts have linked this decline in outdoor time to a rise in anxiety and depression among children.

Razani, who directs of the Center for Nature and Health at UCSF Benioff Children’s Hospital Oakland, said more outdoor family experiences could be the remedy.

That’s been the case for Angelica Ramón, the mother who recently started taking her toddler on Fichman’s bilingual hike. She said they were awestruck by the stars when they went camping for the first time this summer.

Now, going outside is part of their daily routine.

“He’s growing, he’s going to start school” she said. “It’s very important for him to start and to know and to do, and to meet people.” 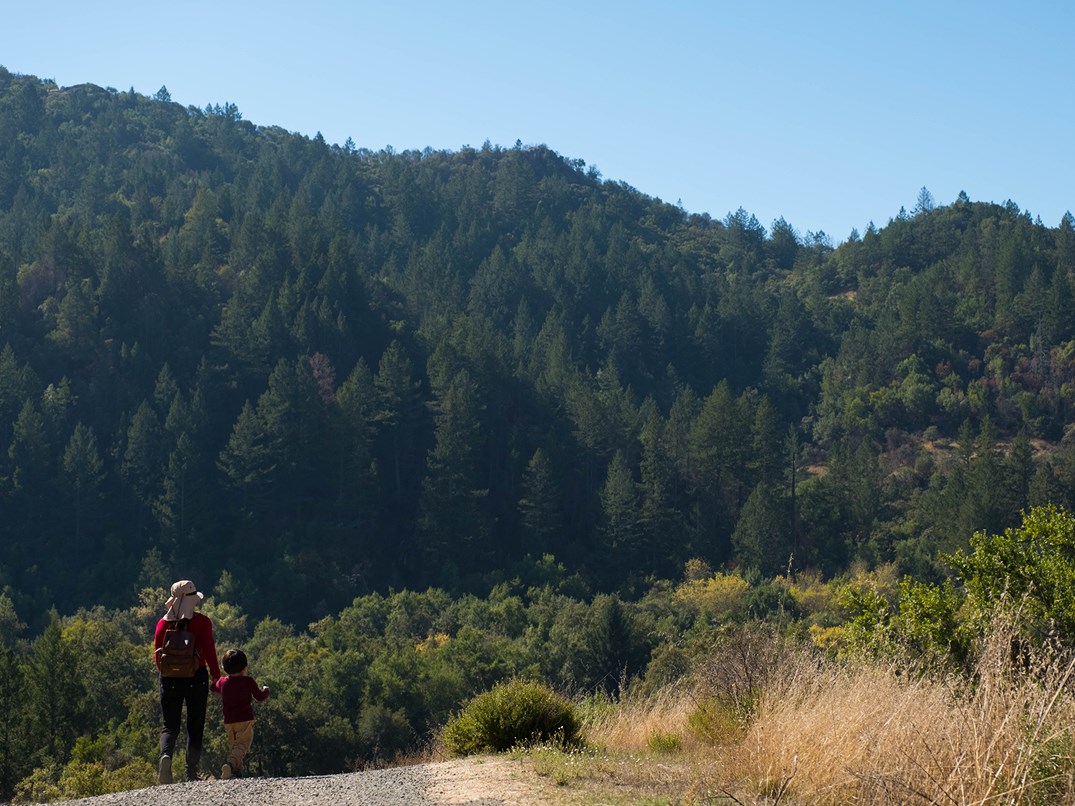 The science about the outdoors’ health benefits is still evolving. But being outside is a proven stress-reducer, whether it’s full-on exercise, gardening, or just picnicking. Razani says these activities can have a positive effect on everything from birth weight to life expectancy.

She says even putting plant life in an and around your home might make a difference.

“The public health challenge is to ensure that there is nature everywhere,” she said.

The Future of California’s Wild

The Trust for Public Land, a national nonprofit group that pushed for Prop. 68, describes a “park poor” neighborhood as anywhere that’s more than a 10-minute walk from a park. They found that one in three Americans live somewhere that fits the bill.

California State Parks has about $255 million to build, improve or expand parks in areas like this. Earlier this month, they opened up a public comment period for input on how and where they should use the money.

Sedrick Mitchell, deputy director for California State Parks, said the bond is an opportunity to give people a voice in their local green spaces. He said they’ve had success with this model in the past.

“Through the use of language, or through cultural arts ... whether it be having the community engaged in the actual development of the park by having art projects or community days, we’ve seen a wide variety of strategies used to help make the park more reflective of the communities where they’ve been built,” he said.

Martinez, of the nonprofit state parks foundation, said these efforts “will be very important for the future of California 50 years down the road.”