Evin Johnson works with victims of gun violence in Sacramento. He also survived a gunshot wound — not by police — and says the thought of having more cops patrolling the streets of Sacramento’s communities of color makes his toes curl.

“It would take a lot out of a black person to work with these guys every day,” Johnson said. “I think it would do something to your soul. It’s going to break you down.”

That’s what Sacramento Mayor Darrell Steinberg is up against with his goal to have police do more than just respond to calls or chase criminals. He wants to do this by having more police on neighborhood beats, something he says that Sacramento does not have anymore.

At a council meeting last month, the mayor told Police Chief Daniel Hahn that finding a way to increase community policing would be “among the greatest services” he could provide on the heels of the Stephon Clark shooting.

Steinberg asked Hahn to “lay out a strategic plan for how we get back to genuine — I don’t even want to call it community policing — neighborhood policing.”

Community policing is a style of law enforcement he says he witnessed in Sacramento in the 1990s, when many officers jobs were to walk the streets to get to know neighborhoods. Now, he says there’s too much rapid response from officers that spend most of their time in their cars. Building relationships would boost “confidence in ways that create less fear for both the community and the police officer,” he argued.

Community policing almost entirely went away when the city lost federal funding. To restore this style of policing, it'll take millions of dollars and time. Steinberg says there’s a potential way to fund this.

It’s called Measure U, which was created to restore services to police, fire and parks that were cut during the recession. The measure expires next year, and the city anticipates asking voters to renew it this fall, including the possibility of asking for more money for neighborhood officers. But residents also want more investment in communities of color.

The mayor, who says he’ll make an announcement soon, said Sacramento believes the philosophy of community policing already exists in the city.

But that’s not true for Black Lives Matter Sacramento leader Tanya Faison. Going on seven weeks, her group has held demonstrations outside the district attorney’s office, calling for justice for Clark. 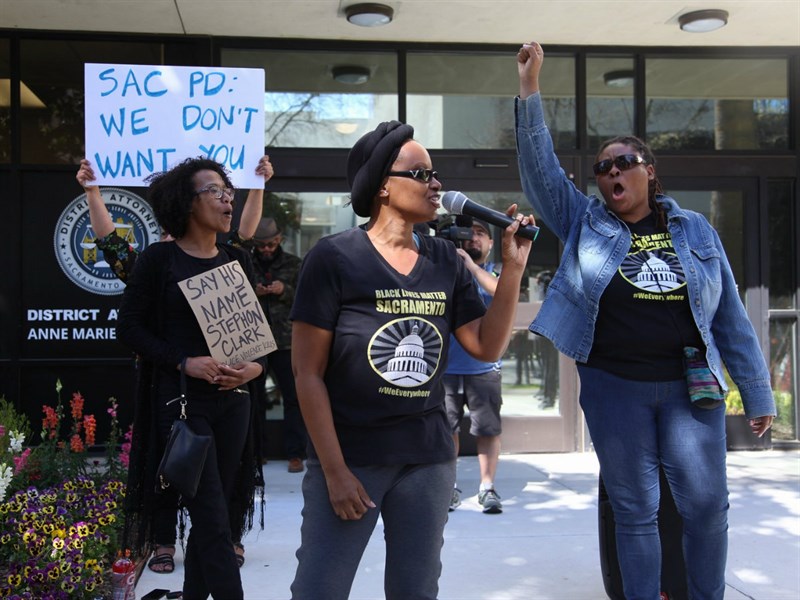 When it comes to law enforcement, Faison’s ideas are dramatically different than Steinberg’s.“I want the police to go away,” she said, “but until that happens we do need to see reforms happen and they need to move in the direction of community power.”

Her goal is for the community to police itself, which is part of the reason she’s organizing a cop-watching group and a network of volunteers that can help residents during encounters with police. She says this practice of live-videoing law-enforcement activities hopefully will reduce the number of black and brown people killed by police.

Faison remembers a moment a year-and-a-half ago in Del Paso Heights, where she says cop-watching prevented a man from being shot. “As a result, they stopped acting as aggressive with him,” Faison claimed. “They took their guns down and pulled out tasers instead and then they broke his window and got him out.”

But how feasible is it that community policing can work in Sacramento?

Really tough, says Sacramento State criminology professor Ryan Getty, who says there’s no blueprint for how to establish a philosophy of community policing in a city.

Getty says elements of community policing should have started “as soon as Chief Hahn came in,” but that “now it’s highly reactive, and they [city officials] are kind of just trying to stop the bleeding” after outrage over the Clark shooting.

He teaches community policing to students wanting to become law-enforcement officers, including Sacramento police, every year, and he says it’s taught in less than half-a-day. He also explained that some officers view being put on the community beat as punishment. Getty explains that many departments thought it was “a good way to put some of these officers that weren't really making it onto the street into a different position.”

There are 646 police officers in the city, but only 15 are sort of dedicated to community policing, according to department spokesperson Vance Chandler. They’re called “problem oriented police officers,” or POP, which differs from community-oriented policing because the work those officers do often can’t be quantified or measured.

But Chandler emphasized the importance of providing for the community. “Ideally, we continue to development those relationships with our community leaders and build that trust,” he said.

“I would say we are absolutely, unequivocally a community-oriented police department,” Hahn told Ruyak. “There’s no question in my mind. We have been for many years.”

But the community doesn’t always agree. Evin Johnson says for community policing to be successful, the fear of law enforcement will need to come to an end.

“Unless [police] change the culture, I don’t want them to come to the community, because I’m going to be scared,” Johnson said.

South Sacramento pastor Les Simmons couldn’t agree more. He says for community policing to work officers need to be held accountable for their actions or that trust may never happen.

Students With Disabilities Across California Stuck In Limbo

Can You Handle The Truth: Fact-Checking Claims About Breakthrough COVID-19 Cases