If you’ve attended theatrical performances in Sacramento during the past 25 years, you’ve likely encountered some of the work of playwright Terrence McNally. He won the Tony Award for Best Play in 1995 for "Master Class," a portrait of diva Maria Callas, late in life, done locally by Capital Stage. He also won another Tony for writing the book for the musical "Ragtime," which has been part of both the Broadway Sacramento and Music Circus series.

But chances are you aren’t very familiar with McNally’s gay-themed plays, which have rarely been mounted in these parts — though they’ve been seen in the Bay Area. These include "The Ritz" (1975), a farce set in a gay bathhouse before the AIDS emerged, the musical "Kiss of the Spider Woman" (which won McNally his first Tony in 1993, for Best Book; it has apparently never been staged at the professional level locally), "Love! Valour! Compassion!" (a big-cast drama from 1994, winner of the Tony Award for Best Play, and thus far never professionally produced in Sacramento), "Corpus Christi" (a controversial religious allegory from 1998 mixing the New Testament with modern times); and now "Mothers and Sons" (2014, currently on stage at the Sacramento Theatre Company).

As a body of work over time, McNally’s plays with gay characters track the transition from the nearly subterranean gay life of the early 1970s to the present day, when gay marriage is legal and widely accepted socially, particularly among younger people. McNally, who turns 80 this November, has lived long enough to witness enormous social changes.

So, it is particularly regrettable that McNally’s gay plays have seldom been staged professionally here. Sacramento has a prominent gay community, and the city was also the setting for a blow-up in the nation’s culture wars 10 years ago, when a senior artistic administrator at California Musical Theatre resigned under pressure following coast-to-coast outrage over his financial support for Proposition 8, an ill-fated California ballot measure outlawing same-sex marriage that was ultimately overturned by the courts.

But let’s focus the matter at hand: McNally’s 2014 play "Mothers and Sons," currently at the Sacramento Theatre Company. It is a small-cast project (a lot less expensive to stage than, say, "Love! Valour! Compassion!"), and it’s basically a memory play, with several characters reflecting on the early passing of a talented young actor named Andre, who died of AIDS circa 1990.

The character Andre is said to have grown up in Texas, then moved to New York, seeking a career in the theater, which also happens to be the path that playwright McNally followed.

The play involves Andre’s mother, Katharine, now a widow of a certain age paying a surprise social call on Cal, who was Andre’s partner and caregiver for six years prior to Andre’s death. Andre’s mother hasn’t let go of her grief; she remains stressed out and fixated on the conclusions she reached after her son died: that he was not gay when he left Texas at age 18 to become a professional actor in New York, that someone made him gay after he got to the Big Apple, and in the process the interloper passed on the fatal virus.

She also says she’d like to kill the culprit if she ever finds him. Cal acknowledges that at one point, he felt the same vindictive urge, but chose to concentrate on caring for Andre during his final illness.

Actress Lori Russo presents Katherine as an avenging angel so tensed-up that she’s scary, gripping her leather purse with such white knuckles that you worry she will tear the thing in half with her bare hands. It’s a formidable performance, albeit not an easy one to watch.

Cal is played by Casey McClellan with a blend of lingering grief over Andre’s premature death, mixed with an awkward blend of compassion and anger in response to Andre’s mom’s dire reappearance in his now happy, domestic life. Cal reminds her that he didn’t give Andre AIDS and that Andre must have contracted the virus from someone else. 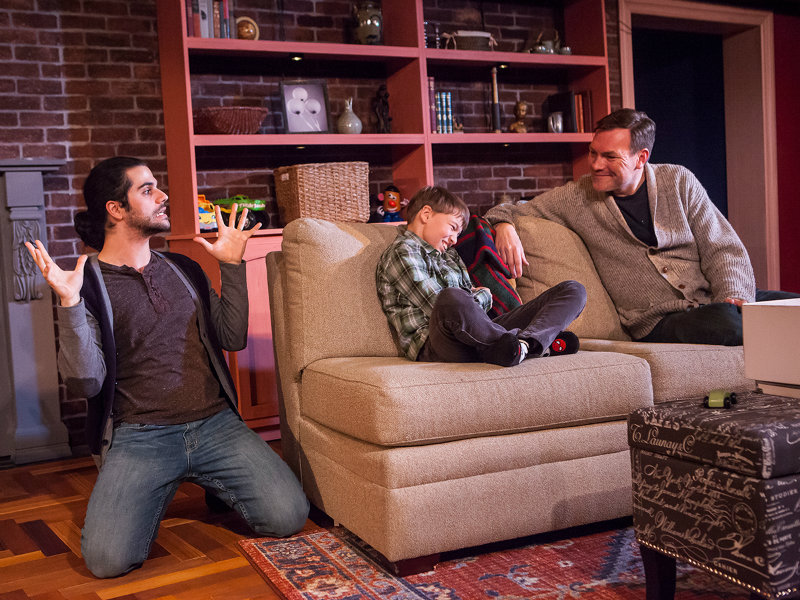 Cal describes his years tending Andre’s growing needs as his health failed, and reminds her that it was not a pretty process. He also chides Andre’s mom for not visiting New York to see her son star as Hamlet, or when Andre was dying. Cal reminds her “He was good, really really good,” and speculates that, if the drug cocktails had somehow become available two years earlier, Andre would probably still be alive now — and he very likely might have won a Tony Award.

Rounding out the cast is Cole Winslow as Will, Cal’s husband, very much involved in raising young Bud. He regards Andre’s mom as a somewhat incomprehensible intruder, but tries (at least most of the time) to be polite with her, though this does seem to require a bit of effort on his part.

McNally’s play runs just 90 minutes, with the action in the living room of an upscale apartment in a Manhattan high rise. The play is one continuous scene, presented in real time, with the six-year-old going offstage for a bath while the adults continue to chat uncomfortably. McNally structures the dialog along the lines of a debate, an aspect that has drawn some criticism from reviewers who deemed the play a little too didactic. But director Bill Zarriello does a good job keeping the conversation “in the moment” for the audience.

I found the passionate soliloquies from the three adult characters thrilling at times, and my take is that playwright McNally knew what he was about, alternating the grim descriptions of dying from AIDS with intervals of barbed verbal humor, softening the tragic underpinnings to a degree. In a way, this play reminds me of one of George Bernard Shaw’s early 20th century “comedies” (like Mrs. Warren’s Profession, about a college girl who is shocked to discover that her wealthy mother earned her fortune providing prostitutes to high-class clients, which engaged the issues of the day and dished up social commentary with a generous serving of wry wit on the side.

My hunch is that McNally wrote "Mothers and Sons" with the primary goal of getting the audience thinking, and talking about, someone they knew — a loved one, or a colleague — who died during the height of the AIDS crisis, when the disease was a terror, killing tens of thousands of people annually, and a lot of people didn’t want to talk about it, much less get involved. McNally wants us to remember, and that’s a worthy goal.

The Sacramento Theatre Company's production of McNally's "Mothers and Sons" continues through April 29. Visit SacTheatre.org for information and ticket reservations.
Follow us for more stories like this