B Street Theatre executive producer Jerry Montoya walked onto a stage at the company’s new home in Midtown on Capitol Avenue. It was still construction time last week at the new center, now called The Sofia Tsakopoulos Center for Performing Arts, and he was still surrounded by the sounds of hammers and saws — even though live theater was scheduled to in less than a week.

“It’s been an 18-month build, and we are within days — as you can hear contractors in the background — within days of delivering our first show here,” he said. 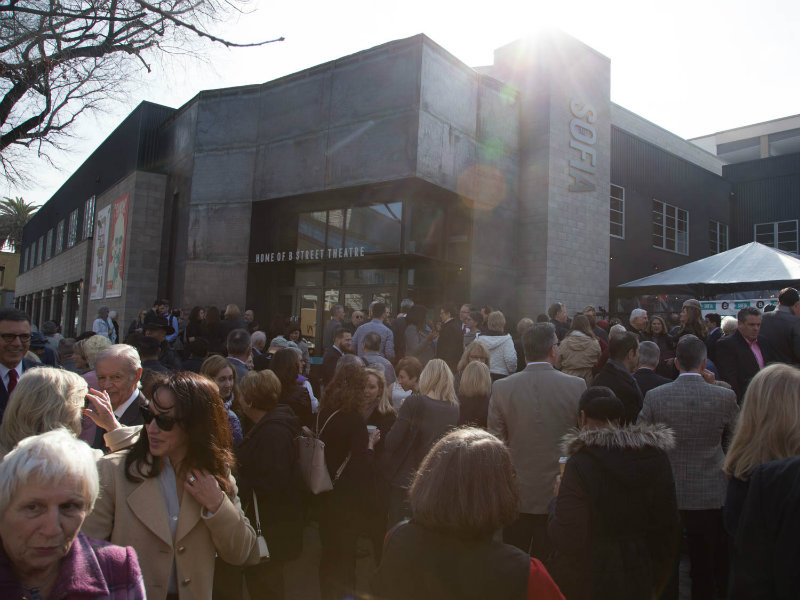 The company’s move from an old metal shed retrofitted with small stage on the north side of Midtown into a new building that was actually designed to be a theater is decades — and $30 million — in the making. B Street’s long-awaited home is also first all-new professional theatrical venue to debut in decades within city limits.

You can appreciate the difference between the old and new locations the moment you step inside. But some of the most important features are things the audience can’t really see from the seats.

At the old B Street venue, for instance, the stage was inches above a concrete slab, with a low ceiling barely 13 feet over it. But at The Sofia, there’s a dark space below the stage that can be used to create special effects that weren’t possible in the old venue. It’s what theater people call “trap space.”

“Basically you have access underneath the stage so that you can you can drop things down, and load scenery through it, or have actors disappear into the ground, or enter out of the ground,” Montoya explained.

An example from 80 years ago is from The Wizard of Oz, when the Wicked Witch is doused with water, and dissolves: She’s actually being lowered through the floor down into a trap space, until only her black cloak and hat remain visible to the audience.

Then there’s “fly space”: a lofty vastness above the stage from which scenery — and even actors — can “fly” down on wires (think Peter Pan).

This is not new technology; you’ll find these bells and whistles at the Woodland Opera House, built in the 1890s. But with the move into The Sofia, B Street finally get access to this this classic stagecraft, plus new stuff like LED lighting and a spiffy soundsystem.

This week, the B Street begins performances in the Mainstage Theater, a 270-seat hall. To be completed in February is The Sofia’s second venue, a 389-seat stage what will host plays for young audiences by day, and performances by visiting musicians, dancers and comics at night.

For producing artistic director Buck Busfield, moving into these new venues is like a painter going from a palm-sized canvas into a much larger frame.

“It’s a slightly unsettling experience, because I knew the former space really well,” he said. “And this is a whole new venue, because the sightlines are different, and the rake of the seats is different.”

The B Street artists are retooling the way they connect in the context of this new and different space. That spontaneous interaction between real people on stage and a breathing, responsive audience is what makes seeing a play a special.

You could say the B Street is adding some nifty arrows to their artistic quiver. This week, their grand new adventure begins, a journey that audiences and performers will take together.

The B Street Theatre’s inaugural show at The Sofia — One Man, Two Guvnors — opens officially opens this weekend, and continues through March 4. Learn more at BStreetTheatre.org.