When California Assembly Speaker Anthony Rendon announced late Friday he would hold the single-payer health care bill for the year, he set off a firestorm of reactions that showcase a split in the Democratic Party.

Rendon (D-Paramount) says he’s a longtime backer of single-payer, but that this proposal was irresponsible.

“The bill that we got from the Senate cost literally double the state budget and didn’t have a funding source,” Rendon told Capital Public Radio in an interview Monday afternoon, referring to SB 562, which passed the Senate earlier this month.  A Senate staff report projected a statewide single-payer system would cost California $400 billion each year.

The speaker said Democrats should focus right now on defending Obamacare in Congress – rather than rushing a single-payer bill through the California Legislature.

“We have never found a funding source for $400 billion as it winds its way through the process. All the other details that were missing made it woefully incomplete. That’s not the way we do business here,” Rendon said.

He also pointed to a list of accomplishments – including a $15 minimum wage, new gun control and anti-tobacco bills, and farmworker overtime – as proof of his, and the California Legislature's, progressive credentials.

“I do not regard (single-payer health care) as the Holy Grail for progressivism,“ Rendon said.

The speaker's critics slammed him on social media.

Rendon is the new Trump

My statement on your face: You are a disappointment. This is cowardly, shameful and dangerous. You Are A Reptile.

And then there was a graphic of the California grizzly bear being stabbed in the back – with the word “RENDON” etched on the knife. That was posted on Facebook by California Nurses Association Executive Director RoseAnn DeMoro, perhaps the bill's most aggressive backer. 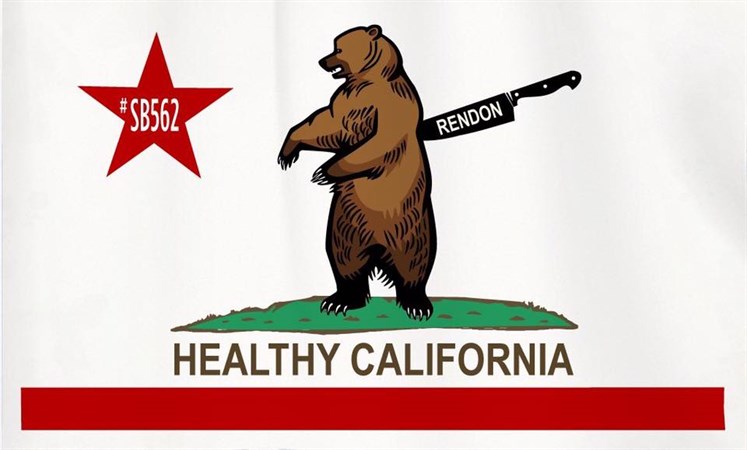 “I think it represents very well what the speaker did,“ said Don Nielsen with the Nurses Union when asked about the image Monday. “He stabbed California residents in the back.”

He would not rule out a recall or primary challenge to Rendon, arguing there must be political consequences for what Nielsen calls a “paternalistic” decision to shelve the bill.

“Frankly, it was a cowardly act,” he said, adding that a study commissioned by his union suggests a single-payer system would save the state money and only cost approximately $330 billion a year.

And grassroots progressives were equally upset.

“It’s so mind-boggling that something that is so incredibly popular – but that is also so critical to so many Californians – is just so easily set aside,” said Lucy Flores, a board member of Our Revolution, the national progressive group founded by former Democratic presidential candidate and current U.S. Sen. Bernie Sanders (I-Vermont).

Some Democratic Party groups rallied to the speaker’s defense.

“To see this kind of reaction in response to a leader saying, taking leadership, and saying, hey wait a minute, this would be a huge reorganization of our health care system, and we want to be thoughtful about how we approach that – it’s surprising, frankly,” said Michelle Cabrera with SEIU California, whose tone suggested she had considered a few other choice words instead of “surprising.“

“SB 562 failed not because of Speaker Rendon, but because the proponents tried to exploit a Trump narrative and make threats to pass an incomplete policy without doing the tough work to build a truly broad-based progressive coalition,“ read a statement from Jim Araby with the United Food and Commercial Workers union, warning Democrats against “falling into the factionalism that has destroyed the rest of the country’s politics.“

But the wide reactions show a real split among California Democrats – with next year’s midterms and governor’s race looming.

Perhaps the most unique vantage point on Rendon's decision to hold the single-payer bill belongs to Sen. Toni Atkins (D-San Diego). She's the measure's co-author – but also a former Assembly speaker who, like Rendon, has had to unilaterally block a major bill backed by progressives for lack of support in her Democratic caucus.

“I understand the pain, the frustration and the hurt“ of the measure's backers, Atkins said Monday. “There is nothing that is as devastating as not having access to quality health care.”

But Atkins added that she understands and respects Rendon's decision – and urged single-payer supporters to eschew negativity. Instead, she suggested that people on all sides of the issue take advantage of the pause that Rendon has created to continue working toward a “Medicare for all“ style health care system in California.