Sacramento State senior Michael L. has the utmost respect for a particular set of church steps in midtown Sacramento. They’re not just any ordinary church steps, though. He has periodically called them home over the last 15 years.

Michael L., an organizational communications major, is just one of the estimated 3,000 homeless or housing-insecure students at Sacramento State. That figure is about 10 percent of the student body. One way that the university is tackling the very real, but sometimes invisible problem, is through a new program that provides some relief to homeless students.

“[I want to] begin to feel like a human again and not the invisible homeless outcast that so many people seem to make me feel like as they pass me by,” he says. He requested that CapRadio only use the first letter of his last name.

Last month, the university launched its Student Emergency Housing program. The program provides homeless students with up to 30 days of emergency on-campus housing and two meals per day on the university dining plan. It’s the first program of its kind for the university, which introduced the ASI Food Pantry for food-insecure students in 2015.

“We really believe in our students, and want to support them in their academic and future success goals,” says Crisis Team Case Manager Danielle Munoz, who spearheads the program. “We hope our housing can provide students a safe and reliable place to sleep at night so their housing crisis does not completely interrupt their graduation goals.”

Munoz says that for many students, homeless shelters are not an option.

“I found that connecting students to local shelters was not something [students] desired, as many often have early curfews, strict rules, and sometimes dangerous environments that are not conducive to learning,” says Munoz.

“Trying to spend entire days surviving by trying to stay clean, showered and fed - [it’s] a full-time job,” says Michael L., who moved into a Desmond Hall dorm room provided by the program on March 8. “It sure doesn’t leave much time to do much other than attend classes. There really isn’t time left over to do much work after all that, so I find it necessary to be on campus six to seven days a week just to try and keep up with the school work.” 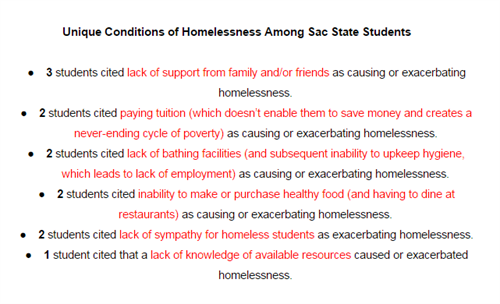 Munoz says that the university is exploring more options to serve its homeless and housing-insecure student population.

“We are exploring hotel vouchers and a program that would connect food-insecure students with alumni who could host a dinner once a month for the student,” says Munoz.

Money and resources are limited at Sac State, however. Munoz says that the university would be appreciative of outside help.

“Housing developers and landlords can consider special rent pricing for students,” says Munoz. “One of the bigger barriers students are facing is the increasing rent in Sacramento. The rent is making it extremely difficult for students to afford their living and school expenses.”

These circumstances, and more, contributed to Michael L. becoming homeless in 2001.

“I had jobs - even good jobs,” he says. “I was housed, I had cars, and I had ‘friends’. But my parents were very abusive and dysfunctional people; they never taught me how to be an adult.”

He cites lack of familial support and preparation for adulthood as the major contributing factors to his initial homelessness in 2001. A six-year federal housing voucher, which expired in 2012, gave him a reprieve from the church steps. Since the voucher’s expiration, he has struggled to find and maintain housing.

“The room is a dream come true for me,” he says. “Before the program, I was spending about $900 a month on food; I cannot possibly afford to rent a room with such a high food bill. It makes the difference between giving up and graduating with a degree.”

But Michael L. says the university could do more to aid homeless students and that there should be several rooms available at any given time so that no one is turned away.

“I propose that if a room [is] not available, [that] a homeless student could still be given assistance with hot meals,” he says.

The emergency housing program has since provided a dorm room for a female student. Munoz says that the university wants to accommodate more students in the future, but must first find additional funding.

The majority of the program’s current funding comes from a donation made by Wells Fargo Bank, which covers the cost of two meals per day per student. The funding is supplemented by housing waivers the CSU system allowed the university to apply for.

“At this time, we are having a conversation about future funding, but it would most likely be the same design as the Student Emergency Fund, and be dependent on donations from the campus and/or the community, [combined with] some fundraising efforts,” says Munoz.

One student who hopes to be part of the emergency housing program is Regina Gomez-Lerma, a junior government major living out of her vehicle with her two teenaged children.

“I live out of my vehicle … I get food stamps but that does not allow me to cook vegetables and beans,” says Gomez-Lerma. “The only income I have is from financial aid, which is not enough to continously house us … and my children are now at-risk because of the current circumstances.”

Gomez-Lerma hopes that the university can provide more assistance and housing to at-risk students.

“I would like housing on or off campus that will house my 13-year-old daughter, 15-year-old son, and myself, with easy access to schooling for my children,” says Gomez-Lerma. “I want to see the CSU system accommodate each student’s individual needs by tailoring it to best fit that person or family.”

Munoz says that the university is investigating options for homeless students with dependents.

“We are actively pursuing hotel vouchers for students with children,” says Munoz. “We are in negotiations for the rate and hope the hotel vouchers will also benefit students who identify as non-binding and non-binary genders.”

Graduate student Pixie Ganem also knows what it’s like to live on the edge of homelessness. Ganem, who is working towards a Masters in Social Work, was homeless last year. Ganem says college for homeless students is an answer and a problem all in one.

“For me, it’s this constant struggle of going to class and thinking, ‘what does all of this matter when I have nowhere to sleep?’” says Ganem.

Ganem says one problem facing homeless students is not knowing about available resources. For example, Ganem did not know that the Free Application for Federal Student Aid (FAFSA) allowed students to claim homeless status.

“I could’ve taken more money out and lived on loans. I didn’t know of any resources; I thought I was the problem, the failure, and I can say that housing instability exacerbated my mental health instability,” says Ganem.

Ganem has since taken out loans and is working part-time, which enables them to rent a townhouse. But nothing is guaranteed.

“This summer is reliant upon either confirming a new job or expanding hours at my current employment,” says Ganem. “Housing stability feels so fragile.”

*Editor's Note: Michael L. initially permitted Capital Public Radio to use his full name. He will soon be graduating and prefers anonimity due to future job prospects. He has since requested that CapRadio only use the first letter of his last name.

As Newsom Weighs Reparations Bill, A Scholar Has A Word Of Caution For California

Sacramento City’s Workforce Is Overwhelmingly White And Male. But An Equity Plan Hopes To Address That