After five years of drought and now all this precipitation there’s so much snow in the Sierra Nevada that state water officials are preparing for a massive runoff year. But the traditional way of calculating the snowpack has a huge margin of error. A new way to measure it could greatly decrease that inconsistency.

Every winter and spring a network of snow surveyors manually tally how much snow is in the Sierra Nevada. They do this by measuring snow depth in the same spots every year. Pacific Gas and Electric Hydrographer Christine Bohrman and I hopped out of a helicopter in 2014 in the mountains east of Fresno to do this.

We snowshoed to a spot where snow levels have been recorded since 1928, and she pierced the snow with a hollow aluminum tube.

When she finishes she has me to record the measurements. "Forty-nine, so eight inches of water content,” she says.

Crews like Borhman’s either ski or fly in, but that could change with the use of new technology. A four-year pilot project between NASA, the California Department of Water Resources and local water authorities is measuring the snowpack from the sky. They’re using planes that shoot out laser pulses to detect how deep the snowpack is and how much water is in it. It started out as a test project on the Tuolumne Watershed four years ago and is now being used on the San Joaquin River Watershed.

“This one here is the LIDAR,” says Kat Bormann, one of the NASA scientists based in Mammoth who work on the plane. She's referring to the surveying method, which stands for Light Imaging, Detection and Ranging. “It has two laser sources situated within the unit itself. We can push out 800,000 points per second with this unit.” 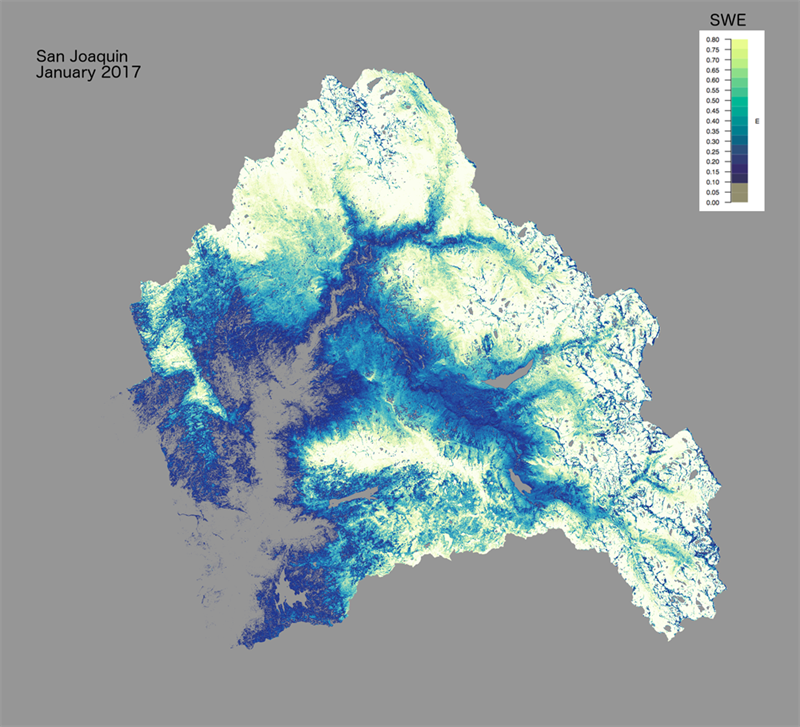 This map generated through the LIDAR method shows the San Joaquin River Basin back in January after the year's first snow survey. Friant Water Authority / Courtesy

Those pulses bounce back to the unit and combined create a map of the area. The team flies the plane over the region when there’s no snow and then again at the start of each month from February to April. Subtract the first value from the second, and voila, you have the snowpack depth. A second unit on the plane detects the snow's density. Tom Painter is the NASA scientist who came up with the idea. He says to think of the old system of manual surveys like a computer screen with only a few pixels working.

Painter says this is a big deal because manual snow surveys can be off by 20 to 60 percent. In his past flyovers of the Tuolumne Watershed the new measurements were only about two percent off. He says the data also shows what snow will melt first based on how dark it is.

“That allows us to do a very certain forecast of how much water’s going to come out of the basins,” says Painter. “That uncertainty that’s been a part of water management in the western U.S. is going to go away.”

The first set of data from the flyovers of the San Joaquin Watershed from February show there’s just over a million and a half acre feet of snow waiting to melt in the mountains east of Fresno. That’s like a million and a half football fields with a foot of water covering their entirety. That number is expected to greatly increase when data comes in from the March and April flyovers. Jeff Payne is the Water Resources and Operations Coordinator for the Friant Water Authority in charge of the basin.

“They found depths of 50 feet in some of the avalanche areas,” says Payne. “If you can imagine 50 feet of snow, that’s Donner Party depths, it’s crazy. It’s going to be really eye opening for us to incorporating these things into our water supply management.” 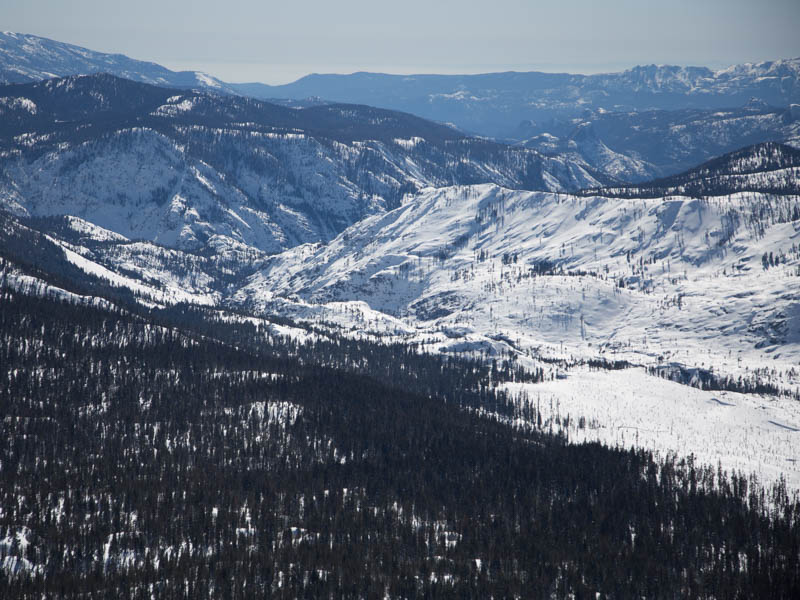 If using this technology proves to be as good as it sounds, Payne says its success has huge ramifications for California. Frank Gehrke leads the California Cooperative Snow Program collecting snowpack data. He says the precision that comes with using this technology may prove helpful for farms and cities in wet and dry years because they might get a water supply forecast up to a month earlier than they do now.

“It’s, you know, how much acreage you should plant and what you should grow. Do you have to hook your wells up,” Gehrke says. “To the extent there is uncertainty in a forecast then the end user has to hedge their bets.”

Gehrke says the only problem the new technology poses is how expensive it is to operate. He says it can cost three times as much as the amount it costs for the manual survey. The other benefit from the aerial surveys is precise knowledge about potential flooding. That’s important to water managers like Michael Jackson, who oversees Friant Dam for the Bureau of Reclamation.

As we look at water spewing from the dam, he says he expects more than 4 million acre feet to flow out of Friant Dam and down the San Joaquin River this spring. The reservoir only holds about 520,000 acre feet.

“We’ll probably end up needing to draw it down to below 300,000 acre feet in order to make room for what’s shaping up to be a record snowpack and runoff year,” says Jackson

For Jackson, knowing exactly how much water will flow into Millerton Lake northeast of Fresno is super important to protecting homes, farms and levees from flooding.

“The better information we have the more certainty we can provide in our operations,” says Jackson. “It could come down even to a safety issue like this year with all the flood control parameters we’re working with so we don’t have to release too much water downstream.”

As the new data continues to come in, the old way of snow surveying won’t totally go away. For at least the coming years water leaders will compare the data from the two methods to see if there are any inaccuracies.