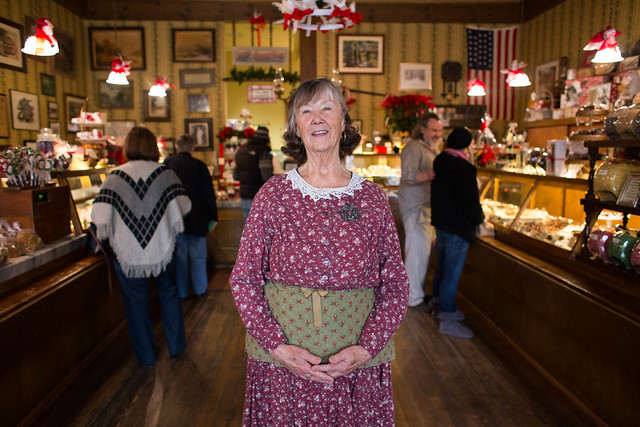 As Janice Nelson makes her way along a wooden display case she ticks through a few of her favorites: fresh fruit jellies, caramel marshmallow bars, brittle and a striped ribbon candy.

Nelson is owner of Nelson’s Columbia Candy Kitchen and she’s the keeper of family candy lore. Everything made by hand has a story to go with it.

"In England they call them boiled sweets but in America we call them as hard drops,” explains Nelson. “We make all of these by hand. I’ll show you the little 1873 machine that we use to hand crank these little guys out."

The family candy makers use machines from the 19th century to shape, crimp and cut many of the sweets they are known for.

Some of the recipes go back to a Danish confectioner who opened the original candy store in the 1920s in the gold rush town of Columbia. Nelson’s late husband’s grandfather, C. Rex Nelson, came to Columbia during the Great Depression to work as a miner. He lived above the candy shop.

As the family story goes, a happy accident led the Nelson family into candyland.

Rex Nelson injured his arm working in the mines. The confectioner offered him a job in the candy shop while Nelson recovered and one thing led to another.

Janice Nelson says some of those early recipes are still in regular rotation.

As she gives a tour of the shop, Nelson points out that “candy work” and “chocolate work” are two distinct parts of the confectionary business. Companies specialize in one or the other.

Here they specialize in a number of different types of candy and they bring in raw chocolate from a company in San Francisco so they can hand-dip candy, nuts and fruit themselves.

In a kitchen at the back of the store we meet Nelson's 20-year-old granddaughter, Angela Nelson Gardella. She’s sitting around a table doing chocolate work with three other women.

Nelson Gardella recalls growing up in this kitchen and learning to tie ribbon into bows when she was five. Once she was tall enough to reach the counter she learned to make candy canes.

But chocolate was the thing she really longed to get her hands in. Even with her early exposure to the family business, she says it took a while to prove her skill.

Once the raw chocolate is warmed the women scoop it from a basin. They temper it with their hands, spreading it along a marble slab until it's just right for dipping.

A house-made confection called “honeycomb” gets a chocolate bath. The crunchy candy dissolves in your mouth with a note of burnt caramel. 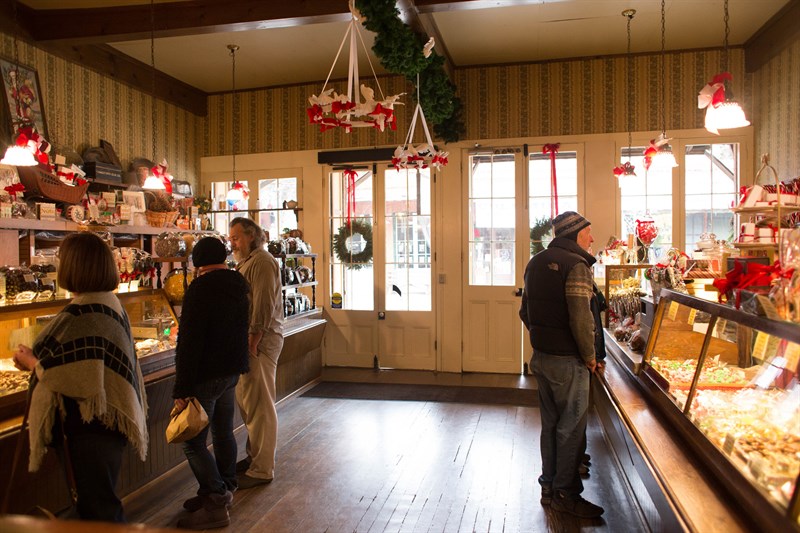 Meanwhile, in the next room, Angela's uncle Michael McMahon tends a copper kettle of boiling sugar waiting for it to reach 300 degrees.

He jokes that it took marrying into the Nelson family to gain entry into the secretive world of candy-making.

McMahon trained with his father-in-law, Janice Nelson’s late husband. Mr. Nelson, in turn, learned candy from his grandfather who worked under the original Danish confectioner who opened the candy store in the 1920s. He hopes the next generation (his nieces and nephews) will carry the tradition forward.

Once the liquid sugar is ready, McMahon pours it onto a steel table with a rim. As the candy begins to solidify, he folds it like fabric. One piece is set aside to be colored red for the stripe.

Next he hoists the mass of candy onto a giant metal hook anchored to the wall. As he pulls it back and forth around the hook, he says he’s “agitating” sugar crystals.

“Every time you put it back up on the hook it adds a bubble and that turns it satiny,” McMahon explains. “It's this really magic thing that happens right in front of your eyes. It goes from clear to pure white and then satin white.”

The satin white and clear red candy are rolled and shaped into thick candy canes that are over a foot long.

Janice Nelson says the family faced a turning point in the 1960s when they considered mechanizing their candy production as many companies were doing at the time.

When she and her late husband took stock of why locals and tourists kept coming over the years, she says they were after two things. “Quality and consistency,” says Nelson.

So they decided to keep their operations as close as possible to what Nelson's grandfather and the original European confectioner had created. They stuck with small batches made by hand.

"Our store kind of specializes in nostalgia —it's what they’re after,” explains Nelson. “And they want that piece of candy to taste exactly the same as the first time they ate it. They want it to pull back that wonderful memory they had at the time.”

Back in the storefront, several regulars stock up on chocolate Santa figures, hard drops and brittle for the holiday season.

Tuolumne County resident Kathy Esposito came to get a box of candy for a business client. “And I can’t go home without the pine nut candy,” she adds.

“It was my dad's favorite. He’s since passed away, but it’s a favorite from growing up around here. It’s the candy - all the county residents know it.”