Will Lawmakers Fill The Holes In Denti-Cal?

This story is part two in a two-part series looking at the holes in California's dental care safety net.

The Brown administration and California lawmakers have solutions to the state’s broken program known as Denti-Cal, but they don’t want to spend a lot of money.

The problem is that 13 million patients are eligible for Denti-Cal, but only a quarter of California’s dentists sees even one of them a year.

A stack of papers on the desk of Stockton dental surgeon Nicolas Veaco can help explain why. It’s a chart from a recent, tricky surgery Veaco performed on a Denti-Cal patient.

“Because of the number of teeth that needed to be removed, and because he couldn’t go off blood thinners, we did his treatment in three separate appointments,” says Veaco.

Then, Veaco billed Denti-Cal. The total fee was $4,000. Denti-Cal will pay $672. That means Veaco gets 17 percent of what he would from private insurance.

These notoriously low rates are the main reason dentists cite for not accepting Denti-Cal. The other problem is the paperwork.

"That chart looks more like a phone book than a magazine," says Veaco.

It took that much correspondence with Denti-Cal before he got paid.

“There’s a lot of work put in for those few patients for very little reimbursement. I look at treating these patients almost more a charity than I do a business thing, and there’s only so much charity I can give,” says Veaco. 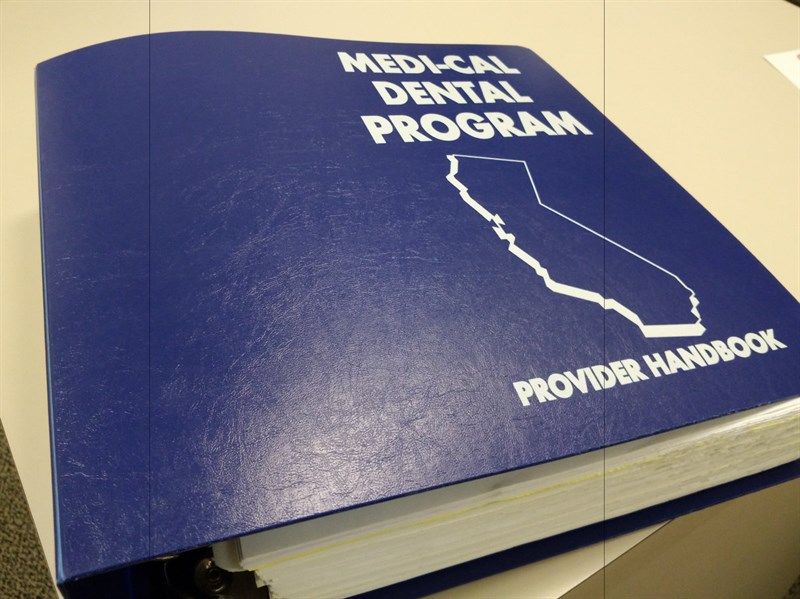 The Denti-Cal handbook that dentists consult about what procedures they can perform and how they get billed lies on a table at Brookside Oral & Maxillofacial Surgery in Stockton. It is 468 pages. Ben Bradford / Capital Public Radio

Lawmakers in Sacramento have recognized this problem, but they’re not solving it by opening the state checkbook. Democratic Assemblyman Jim Wood, a dentist himself, has authored legislation to reduce the paperwork. He spoke at a hearing in June.

“If we can cut some of the red tape,” says Wood. “I know a lot of my colleagues would gladly take Medi-Cal patients.”

That bill has passed the state Legislature, but even if Governor Jerry Brown signs it, Wood acknowledges low pay remains a problem. To address that, Democratic lawmakers and the Brown administration are looking to the federal government. It’s agreed to give Denti-Cal a temporary infusion--$750 million over the next five years, a more than 10 percent bump to the program’s budget.

“I think it’s going to be extremely helpful,” says Denti-Cal Chief Alani Jackson. “It gives us an opportunity to test how does getting additional moneys for the services you’re already rendering impact provider participation.”

But the funding comes with some limits. It would pay dentists higher rates, but only after they see a set number of patients. It’s only to treat children. Some of the funding is restricted to certain counties with few dentists. And, it’s specifically for preventative medicine—to encourage more sealants and cleanings, and teaching good brushing habits.

“The whole theory behind it is let’s prevent the disease before it starts, so I applaud that," says Dr. John Blake, who runs the Children's Dental Health Clinic in Long Beach. "But you’re going to get to the point where you can’t prevent some of it and some of it will have to be treated.”

Blake says his clinic has already become a "dumping ground" for other offices that can only provide basic dental care; they send him patients who need costly work they can't provide.

Dentists and health advocates generally agree the federal money will help, but many worry that its temporary nature and attached strings will limit its usefulness.

Blake says, if the state wants to fix Denti-Cal, it will have to find the money.

There is currently one plan to do that.

Republican leaders in both Assembly and Senate favor adding 200 million state dollars a year to Denti-Cal. They estimate the additional funding could pay dentists the national average for the most common procedures.

“Let’s not play a game that says we’re going to try to provide dental care for 13 million Californians when they can’t actually access dental care,” says Republican Assembly leader Chad Mayes. “If you’re going to have a program, let’s make sure it works.”

The bill died in the Senate.

During a budget discussion, Assemblyman Tony Thurmond said they brought it up too late and it costs too much.

“They did bring a proposal, pretty much at the end of the process, and what we’ve committed to is to having ongoing conversations about how we can do something around Denti-Cal going forward,” says Thurmond.

With a week left before the end of the session, that hasn’t happened. California will have to rely on the temporary infusion of federal money and pared down paperwork to allow Denti-Cal patients access to the care they’ve been promised.