How A Broken, $1 Billion State Program Leaves Californians With Cavities

This story is part one of a two-part series looking at the holes in California's dental care safety net.

The government spends more than $1 billion annually on California teeth, offering dental coverage to 13 million low-income residents who qualify for Medi-Cal services. But, most California dentists refuse to participate in the Denti-Cal program, leaving patients with impossible wait times that lead to expensive health consequences.

The Asian Health Services dental clinic in Oakland is the rare office that sees patients who get their dental coverage through Medi-Cal.

Even with six dentists working on 50 patients a day, office assistant Tiffany Sitlin says the clinic can’t keep up with demand. 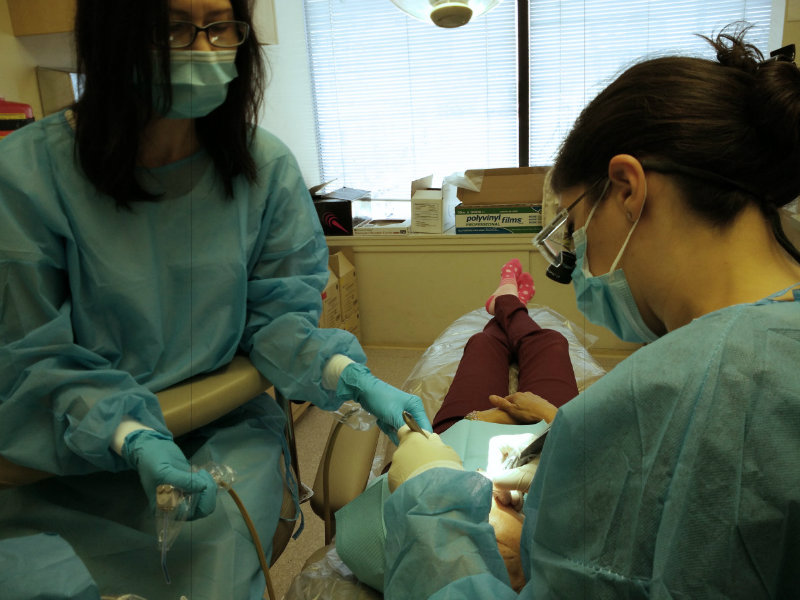 Dental assistants perform a cleaning at the Asian Health Services Dental Clinic in Oakland. As one of the few practices that offers specialty care to Denti-Cal patients, the clinic has nearly a year-long waitlist and is not accepting new patients. Ben Bradford / Capital Public Radio

Cho Hye Yeong, 72, is one of the patients who has had to wait for treatment.

More than a year ago, the Alameda resident first made an appointment for some tooth pain. X-rays showed a cavity, but the clinic could not fit her in for another six months to fill it. By then, the tooth had worsened.

“They told me I need root canal,” says Cho, through a dental assistant at the clinic, who acts as a translator.

They performed the root canal, but Cho would need to come back months later for another appointment for a crown, to cap and protect the tooth. While she waited, the tooth broke.

Cho is waiting again this time at the clinic, for a bridge, to cover the gap where her tooth used to be.

To patient advocates, Cho’s is a familiar story. Denti-Cal covers some of California’s most vulnerable populations, many of whom don’t speak English and struggle when they need to navigate Denti-Cal’s often inaccurate lists to find the rare dentists that accept their coverage.

“They just wait until there’s an emergency to get teeth pulled out, go to Mexico, go to a garage, pull them out themselves—that’s another story I’ve heard,” says Melinda Cordero-Barzaga, who works for Vision y Compriso, which helps connect Latino immigrants to health services.

“Those, to me, are horror stories, because there’s no need to get to that point,” says Cordero-Barzaga.

Thirteen million Californians qualify, but a 2014 state audit found 11 counties have no dentists taking new Denti-Cal patients, while another sixteen are underserved. 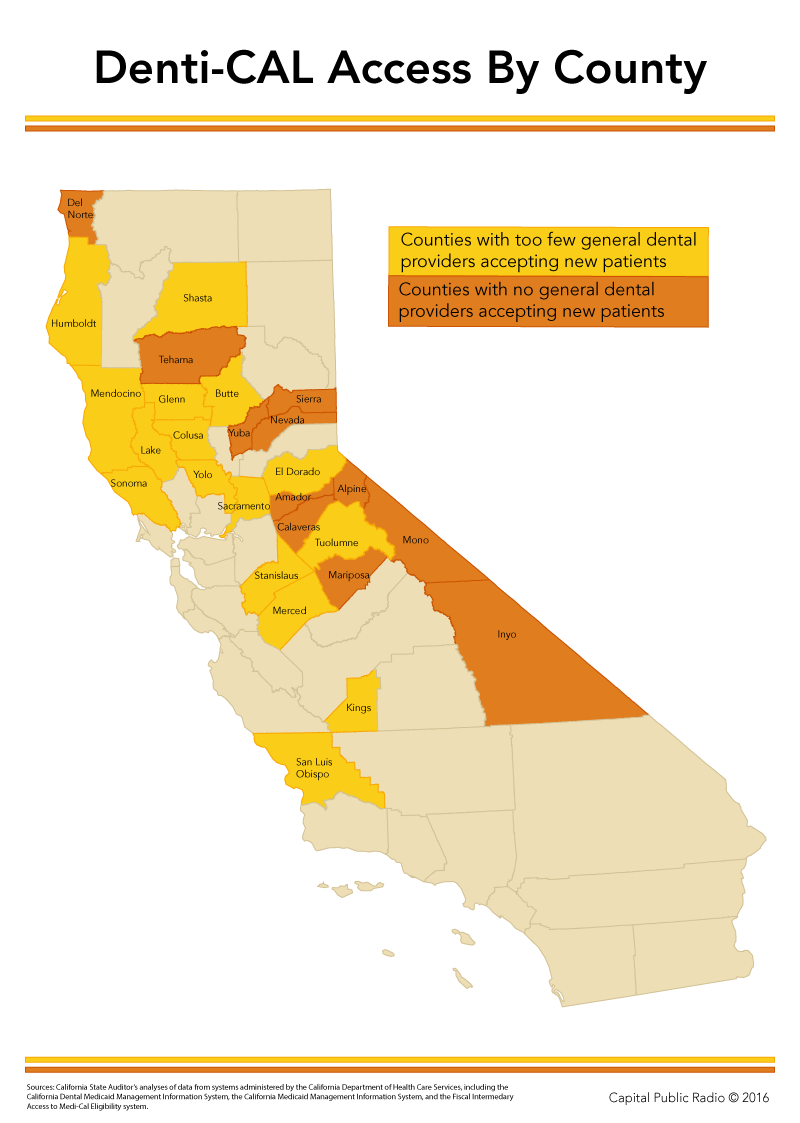 “When I first came out of dental school, we all had some Denti-Cal patients. It was part of our civic duty,” says Dr. Janice Scott at Deer Park Dental in Stockton.

The more than a $1 billion California spends each year for Denti-Cal services is still just one percent of the Medi-Cal budget. The program pays private dentists some of the lowest rates in the country for the work they perform. Scott says the amount of paperwork and bureaucracy and back-and-forth with Denti-Cal to get that pay is so great, she would rather not deal with it.

Another recent state oversight report finds the rates the state pays for Denti-Cal haven’t increased since 2001 and it calls the program’s administration “baffling,” “frustrating” and “harmful.”

“I think [the report was] fair. I think they really served to reinforce what the program already knows about itself,” says Alani Jackson, who heads the Denti-Cal program.

She says the agency is exploring how it can streamline paperwork and better connect people to dentists. But, while the state report calls Denti-Cal “broken,” Jackson says it’s performing.

“I would say that it is doing the job it’s supposed to be doing,” says Denti-Cal chief Alani Jackson.

She maintains there are enough dentists for Denti-Cal to meet its contractual obligations under Medi-Cal and receive federal funds. She says people experiencing long waits or who can’t find care need to call Denti-Cal for help.

The waits will likely get longer, because of basic math. Even as dentists have continued to drop out, lawmakers have almost doubled the number of eligible patients in the program.

Dr. Scott says the problem is fundamentally about how the state prioritizes dental care against other medical care.

“It’s like we carve the mouth out of the body,” says Scott. “We wouldn’t let a kid run around with a cut hand or a broken leg, but we’ll let them run around with a mouth full of cavities, and they’re in pain. It’s a humane thing.”

Lawmakers have acknowledged Denti-Cal’s problems, and recently, efforts to make changes have gained momentum. But that hasn’t included any more state money to increase rates and attract dentists.

In the second part of our series, CapRadio takes a closer look at what lawmakers are and aren’t doing to fix Denti-Cal.