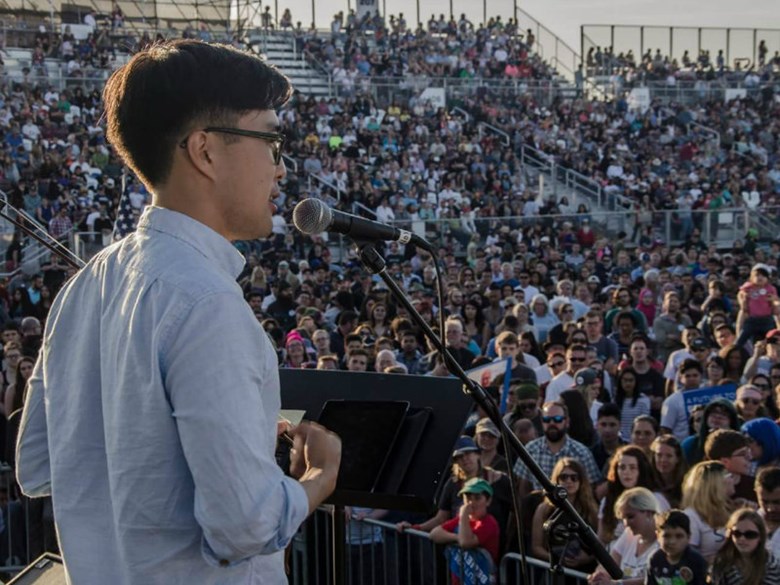 Joe Kye performing at the Bernie Sanders rally in Sacramento in early May.

Local musician Tony Brusca from The Nickel Slots and veteran punk-rocker Kevin Seconds will be entertaining the crowds at the Bernie Sanders rally in Davis today. The Sanders campaign has been using local bands for most of the Northern California rallies, artists like violinist and songwriter Joe Kye.

Kye hit the Sacramento music scene in 2014, entrancing audiences across the region with his violin looping and intricate songwriting. He’s toured nationally and is a full-time musician with local notoriety; that notoriety shot up after his first appearance at a political rally in Sacramento last month.

Kye was one of a handful of local artists tapped to play at rallies for Bernie Sanders in Sacramento, Stockton and Oakland.

Second time around with @berniesanders! Thank you to my homies @jasonchumusic and @brianchrisrogers for helping lead this expression of democracy! #feelthebern #democracy #violin #looping #asianamerican #immigrant #korean #berniesanders

“Playing that national anthem in front of that audience, it was transcendental,” says Kye. “As an immigrant to play the National Anthem...easily one of my top musical experiences ever. Definitely, my social media got a huge boost.”

“It was really fly-by-the-seat of my pants,” says Perry. “I’m glad I had a few bands up my sleeve that I thought could do the trick and get the crowd going.”

Perry booked acts for five Sanders rallies, including the one in Davis tonight. None of the artists are being paid for their performances.

Bernie Sanders, Donald Trump and Hillary Clinton's respective campaigns did not return Capital Public Radio’s request for comment on how artists are chosen and compensated at campaign events.

Kye admits feeling some tension about playing for free, “Musicians make jokes about exposure all the time, ‘you can’t pay your bills with exposure,” but Kye went into the agreement with the perspective of a volunteer.

“In this case,” he says, “it was a cause I believed in. At the same time, this was actual exposure. To be able to play for that many people on that national platform - was a huge boost to my career.”

Joe Kye and Brian Chris Rogers performing at the Sacramento Rally on May 9.