10:50 p.m. - One lane of metered traffic started flowing on U.S. Highway 50 just before 6 p.m. Friday, as crews continue to make progress on the Kyburz Fire, which has burned 200 acres in the Eldorado National Forest, straddling the roadway.

Motorists waited in line to follow a pilot vehicle in alternating directions, while others found alternate routes to drive to or from the South Lake Tahoe area.

Traffic is metered at Sly Park road in Pollock Pines and at Meyers. Traffic will be escorted through the fire area alternating east and west bound traffic.

This is what traffic looks like waiting for one-way traffic escort #KyburzFire pic.twitter.com/QSnE6TbAlG

Even though Hwy50 is back open, as you can see the Kyburz Fire is still burning! pic.twitter.com/4jOUYyNxvD

3:54 p.m. -- As the Kyburz Fire continues to burn in El Dorado County, officials from Caltrans are recommending that motorists use Interstate 80 if they're heading to Truckee and the Lake Tahoe area.

The California Department of Transportation (Caltrans) is alerting motorists that Highway 50 continues to be closed from Sly Park Road in Pollock Pines to Meyers due to a vegetation fire in the American River canyon west of Kyburz.  Motorists traveling to the Lake Tahoe Basin area are being directed to use Interstate 80 to Truckee and Highway 89 South to access all areas of the Lake Tahoe basin due to significant traffic delays on the Highway 49 and Highway 88 detours.

The U.S. Forest Service, assisted by CalFire and Caltrans crews, is identifying and removing trees in the fire-damaged area of Highway 50 that could pose a danger to the traveling public. A re-assessment of highway safety will be undertaken late today to determine whether Highway 50 can be opened to controlled traffic. Information on fire conditions can be obtained online at http://inciweb.nwcg.gov/incident/4408/.

9:13 a.m. - Highway 50 is still closed between Pollock Pines and Meyers because of the Kyburz Fire. The blaze has scorched 200 acres. Containment is at 30 percent.

Kristi Schroeder, with the U.S. Forest Service, says they've been using the new "Super Scooper" aircraft that can scoop water out of Lake Tahoe and dump it on fires.

"That's been quite helpful," says Schroeder. "It's dropped 1,600 gallons at a shot. So that combined with our tankers, our helicopters and our ground crews has allowed us to get a handle on this fire."

Officials say the blaze was started by a vehicle fire. 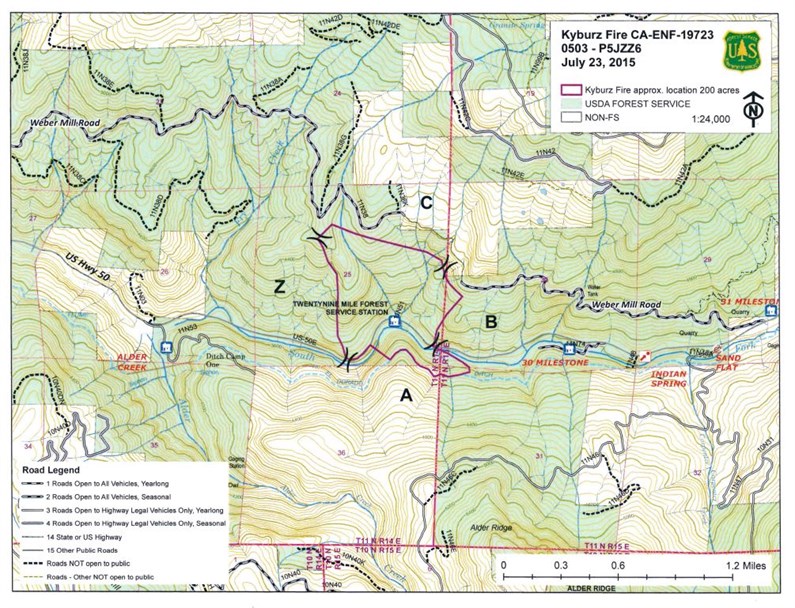 8:22 a.m. - Firefighters are getting a better handle on the Kyburz Fire, which has burned 200 acres in the El Dorado National Forest. Containment is now at 30 percent.

"They made really good progress overnight," says Kristi Schroeder with the U.S. Forest Service. "They have a line around the top of the fire and that'll be reinforced today."

She points out that the fire has prompted authorities to keep Highway 50 closed between Pollack Pines and Meyers.

"Safety is our primary concern on the fire both for the firefighters and for the public," says Schroeder. "And that's governing our decision on when we open Highway 50."

The El Dorado County Sheriff's Office says the fire was started by a vehicle fire.

Highway 50 is closed east of Sly Park road and west of Meyers. Detour is south on Sly Park road 5 miles to Mormon Emigrant Trail (Iron Mountain road) to Highway 88. Note: People's GPS is rerouting them Sly Park to Park Creek road which will lead back into closure area. Do not go that way. Big trucks should take Highway 49 south to Jackson and east on Highway 88 to Highway 89 north to Lake Tahoe.

Highway 50 from Pollock Pines to Meyers remains closed and evacuations are still in effect.

Highway 50 is closed east of Sly Park road and west of Meyers. Detour is south on Sly Park road 5 miles to Mormon Emigrant Trail (Iron Mountain road) to Highway 88. Note: People's GPS is rerouting them Sly Park to Park Creek road which will lead back into closure area. Do not go that way. Big trucks should take Highway 49 south to Jackson and east on Highway 88 to Highway 89 north to Lake Tahoe.

7:32 a.m. - Highway 50 from Pollock Pines to Meyers remains closed as a wildfire continues to burn in the El Dorado National Forest. Officials are urging motorists Friday morning to use alternate routes if traveling through the area.

The Kyburz Fire has scorched 100 acres and is 5 percent contained.

The El Dorado County Sheriff Department says the fire erupted as a result of a vehicle fire at about 2 p.m. Thursday.

Officials describe the blaze as a surface fire that is burning on both sides of Highway 50.

Bus routes between Sacramento and Lake Tahoe are operating on a detour route, but there will be no stops in Placerville.

U.S. Forest Service officials say there are mandatory evacuations from Whitehall to Sand Flat Campground and voluntary evacuations are in place for Kyburz and Strawberry.

According to Cal Trans, Cal Fire will re-evaluate the closure at Highway 50 at about 10 a.m. Friday.

#KyburzFire Mandatory evacuations remain in place from east to Sand Flat Campground & for the community of Sugarloaf http://t.co/oecoyBBFXG

415 firefighters assigned to the #KyburzFire US 50 remains closed, 100 acres and 5% contained. http://t.co/oecoyBBFXG

If you want your holiday package to arrive on time, here are the deadlines to know