In 2008, Californians passed a law by a two-thirds majority to give egg-laying hens more space to move around. Farmers have had the last seven years to comply. Proposition 2 (the Prevention of Farm Animal Cruelty Act) went into effect this January.

Farmer Frank Hilliker was against Proposition 2 from the beginning. He wasn’t sure he’d be able to stay in business when the law passed.

But, the long time egg producer has come around.

"It’s made it fun going to work again. At one point, we almost shut the doors. But, after some soul searching and not wanting to work for someone else we decided to make a go of it."

The law requires that hens have enough space to stand up, lie down and spread their wings fully.

Hilliker has spent the past seven years modifying his hen houses to meet those requirements – either through constructing new facilities or by increasing the size of his cages. 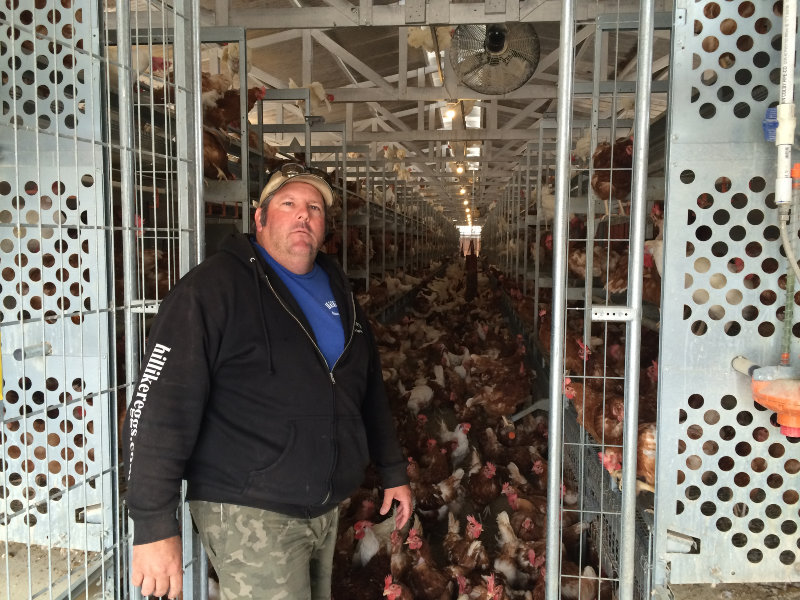 Inside a barn on his ranch near San Diego, three narrow battery cages about 60-yards long are suspended above the dirt floor. They’re filled with close to 2,500 brown and white chickens.

A sea of beady eyes turns to look towards the light when Hilliker opens the door.

There used to be twice that many birds packed into the same space, but Hilliker has enlarged the cages, and reduced the number of hens enclosed in each cage.

The birds' feathers are still touching, but they have some wiggle room. 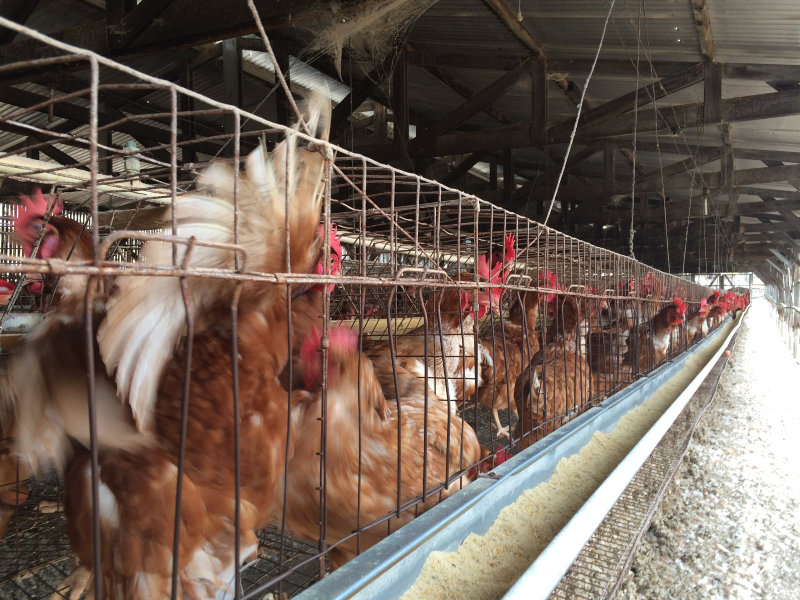 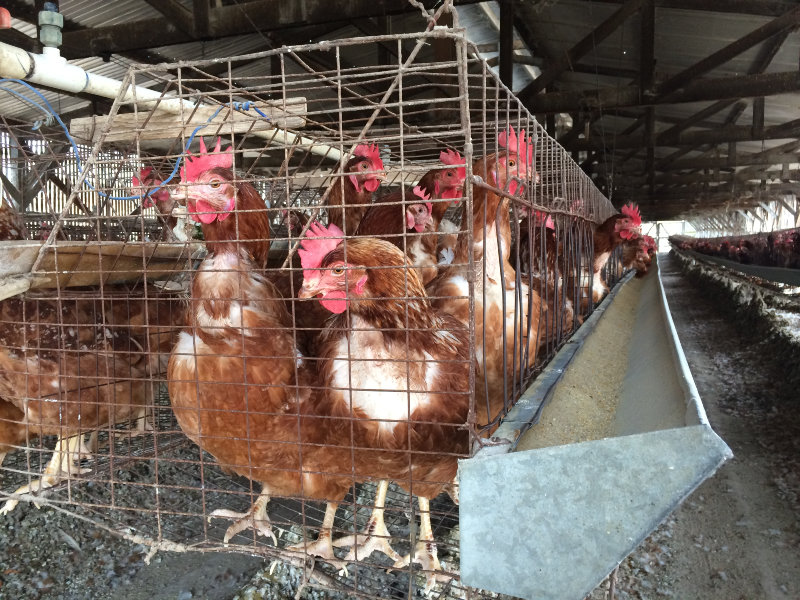 Hilliker wants to go cage-free. He says there’s market demand, and he can charge more for a dozen eggs.

He walks next door to another large barn that has been completely retrofitted. When he pulls back the door the squawking sounds are much louder.

"They sing more when they’re in the cage-free house versus the caged house and it’s because they’re more social," says Hilliker.

He says even though he grew up on the ranch, this is the first time in his life he’s learning about a chicken’s natural behavior.

The birds scurry around on the floor, peck, scratch and perch on the open multi-level aviary. 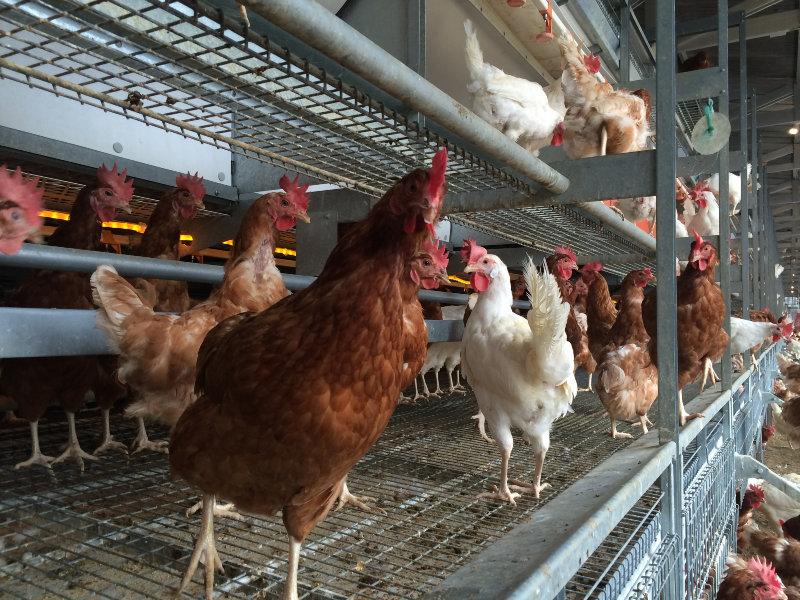 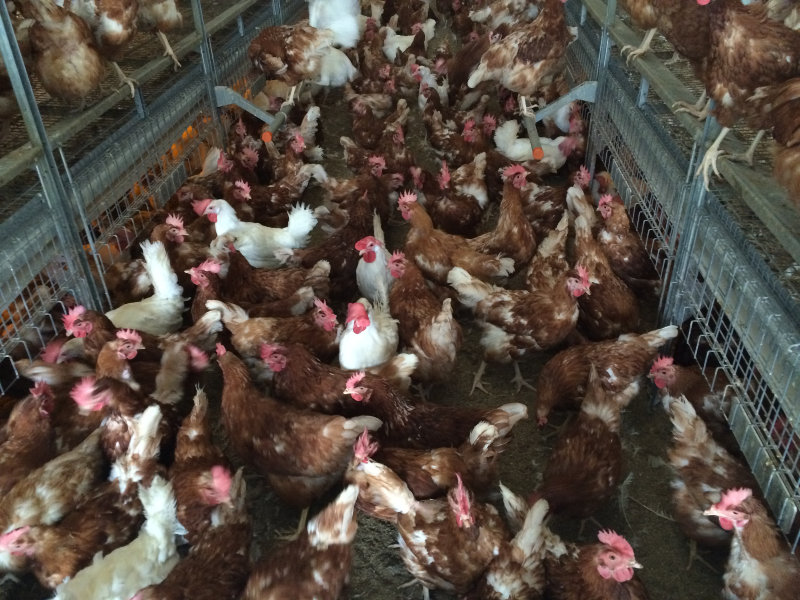 “You can see how they’re jumping back and forth. I like to call it chicken Disneyland,” exclaims Hilliker proudly.

Cage-free facilities were exactly what the architects of Proposition 2 intended when they wrote the law in 2008. Paul Shapiro is with the Humane Society – the organization behind the legislation.

"At the time that Proposition 2 was voted on, the egg producers and the animal advocates all agreed that it would require a de-facto shift away from caged confinement to cage-free egg production.”

Shapiro says the egg industry flip-flopped in ensuing years. Producers have challenged Proposition 2 on numerous occasions – arguing that the law is unclear.

Shapiro says the law has been consistently upheld by state and federal courts.

"And, one court even ruled that it doesn’t take the acumen of a Colombo to figure out how to comply with a law that just says that birds must be able to spread their wings.”

But, the measure’s language did not include the phrase “cage-free,” nor did it specify exact dimensional requirements.

“Chickens don’t do pirouettes," says Hilliker. "They don’t soar like an eagle --  they don’t extend their wings, they kind of keep them in close and flap them, but they never extend them fully.”

Therefore Hilliker, like many other egg producers, use the state’s egg safety rule, rather than Proposition 2, to determine how much space to give their birds.

That rule requires that each hen is allocated 116 square inches of space. That gives each chicken about enough room to stand on a dinner plate.

But, advocates say that’s not enough space for birds to spread their wings.

And, yet Proposition 2 may have improved the lives of California’s egg-laying hens.

"I’ve gone cage-free, and a few others have, but all it’s done has given the chickens bigger cages," says Hilliker.

The law -- like most animal cruelty laws -- does not require inspections. Non-compliance is a misdemeanor offense. So, it will be left up to local law enforcement to interpret the law – if they receive a complaint.