Many consumers are increasingly animal-welfare conscious. But, when it comes to buying eggs the options can be overwhelming -- cage-free, organic, pasture-raised. Are the labels worth the extra money?

Jennifer Fearing, an animal welfare consultant for the Humane Society of the United States, says it depends. Sometimes your dollars pay for better conditions on a farm, and other times labels are misleading.

She's is standing in front of the egg display case at a Raley’s grocery store in Sacramento.

She says egg labels should reflect conditions on a chicken farm, but...

"Claims like cage-free, free-range, free-roaming, pasture based those are not regulated, the government isn’t proclaiming what cage-free is," Fearing explains. 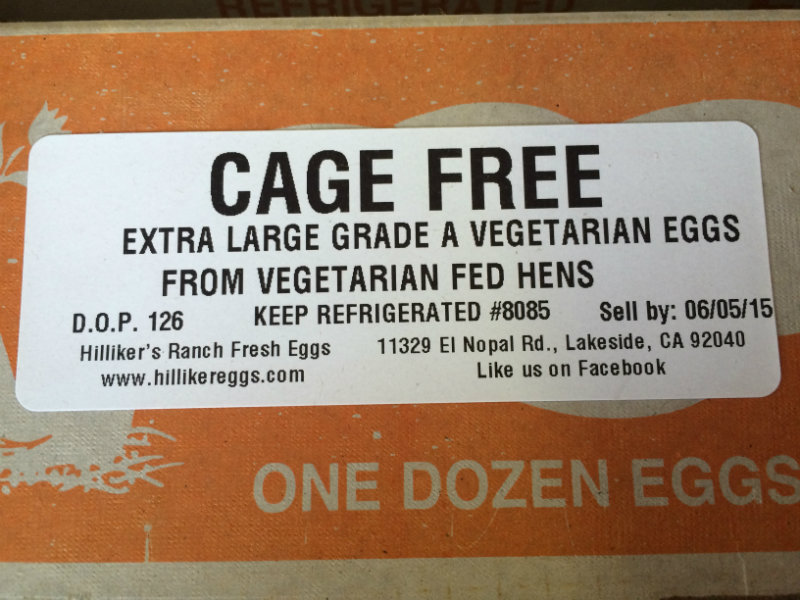 There are some certification programs where a third party inspects a farm to assure labels are accurate. For example, organic farms are regulated by the United States Department of Agriculture (USDA). Which means chickens on an organic farm are cage-free, and must be allowed outdoors. Plus, they must be fed organic feed.

But, organic eggs are a less than 1 percent of the market. 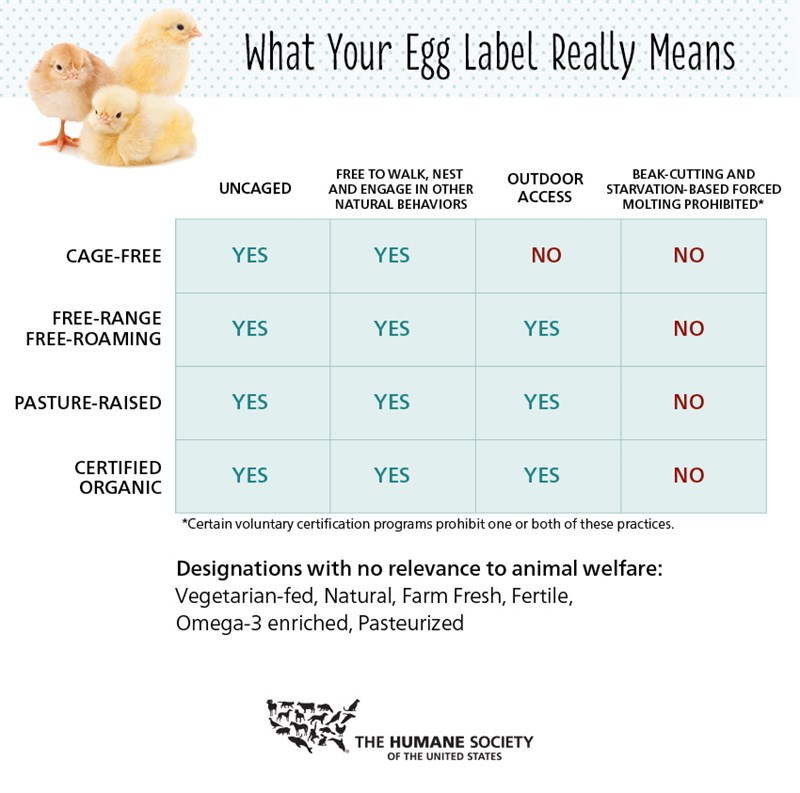 The bulk of the market is conventional eggs. Fearing says most chickens are raised in battery cages, wire cages connected in rows and columns. The goal is to maximize the number of birds in a barn.

In California, egg farmers recently had to modify their battery cages to comply with a recent law mandating more space for each bird. Chickens must now be able to spread their wings and turn around. 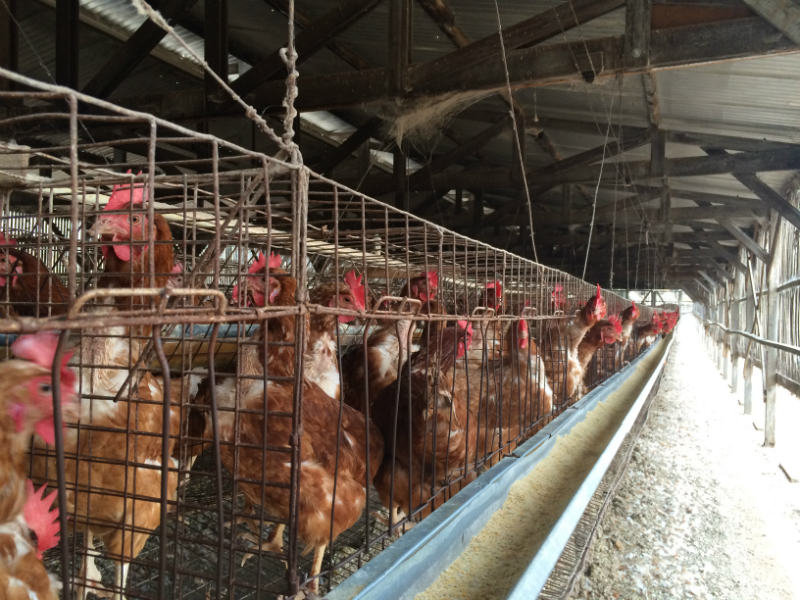 Frank Hilliker grew up on a conventional chicken farm outside of San Diego. He now manages Hilliker's Ranch.

He pulls open a door to a barn housing about 2,500 brown and white birds. Beady eyes turn towards the light. Hens brush up against each other inside narrow wire cages running the length of the barn.

The birds will be confined their entire lives.

Still, Hilliker is a classic businessman and he’s following market demand. That’s why he's gradually switching to cage-free facilities, where birds are packed from floor to ceiling, but they have ample space to play on a white structure that looks like a closet organizer. 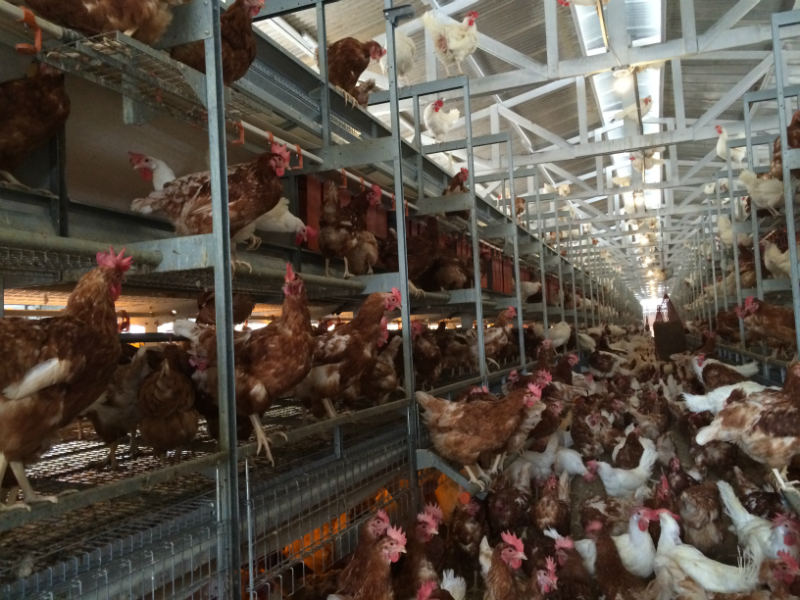 These "cage-free" birds at Hilliker's Ranch have more room to play and jump, but they are never let outside. Lesley McClurg / Capital Public Radio

"They perch, they jump from one level to the next," Hilliker says. "They're more social, and even sing more when they’re in the cage-free house versus the cage house."

Yet, these cage-free chickens will never go outside either.

"So, there could be a little door open at the end of a barn for a few hours day that lets out onto a six square foot patio that no chicken ever wants to go onto," explains Fearing.

If you're looking for chickens who are allowed to frolic in a pasture, look for eggs labeled ‘animal welfare approved’ or ‘certified humane' -- usually they cost about twice as much as conventional eggs.

Andrew Abrahams runs Long Dream Farm in Lincoln, CA about an hour northeast of Sacramento. His eggs are animal welfare approved, and his farm looks like an idyllic scene from a child’s book. 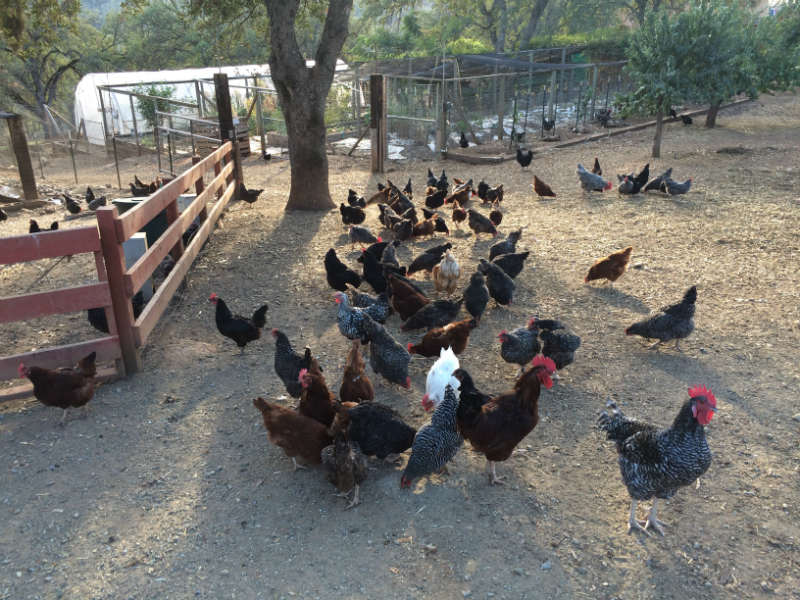 "Chickens get to live their lives outside on grass as much as possible confined as little as possible," says Abrahams.

About a thousand large fluffy chickens are pecking all over a grassy hill covered with oak trees.

Abrahams says he believes your egg purchases reflect your values.

"You’re voting with your dollars. So, you’re deciding whether you want to vote for chickens living in some kind of confined system being forced to lay and then being discarded," explains Abrahams. "Or, chickens that are living pretty long, happy lives outside."

He swears his eggs taste richer than conventional eggs. And I have to admit that after doing my own taste test, the flavor was incredible. Still there’s little to no academic research on whether or not your scrambled eggs will taste better if the chickens are happier. 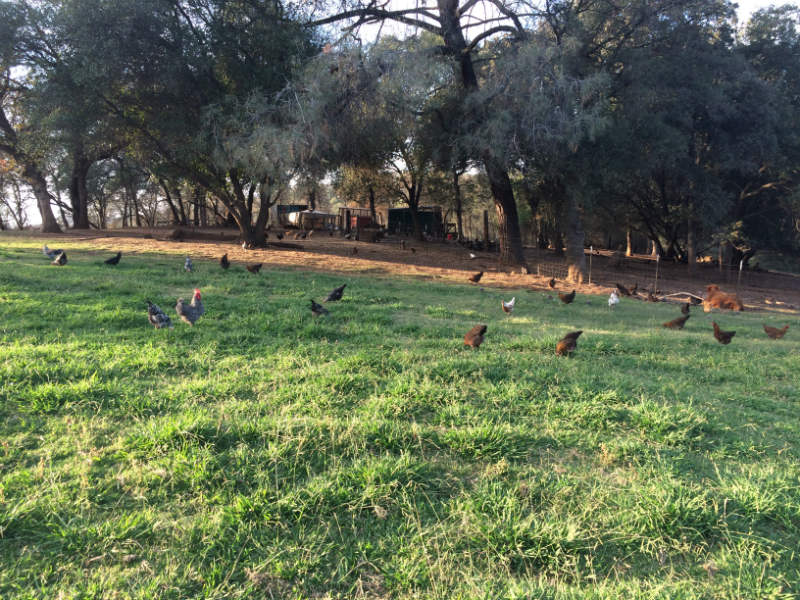