Fires In And Near Yosemite Prompt Evacuations Of Homes And Campers

(AP) — A 400-acre wildfire in Yosemite National Park has prompted the evacuation of about 100 campers, officials said.

Park spokeswoman Kari Cobb said Sunday that the Meadow Fire was located between Little Yosemite Valley and Half Dome in the park's backcountry. Cobb said visitors camp overnight in the valley before climbing the park's iconic Half Dome peak.

The Meadow Fire is burning in the greater Little Yosemite Valley area and is at 400 acres. http://t.co/J876aFiey7 pic.twitter.com/NMTyI5HpAF

Cobb said the fire was started several weeks ago by a lightning strike. She said that park firefighters have been monitoring and controlling the burn, which unexpectedly grew to 400 acres on Sunday. 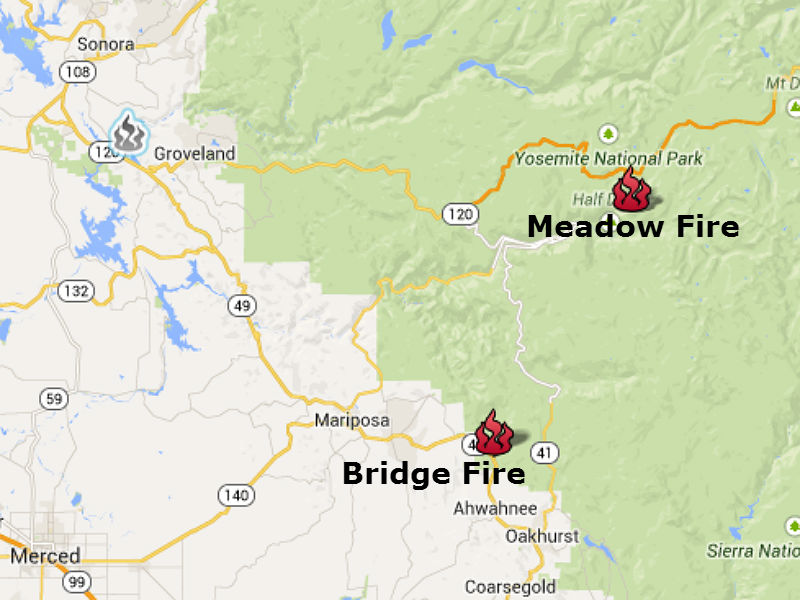 A separate fireq, named the Bridge Fire, broke out Friday afternoon has prompted an evacuation order for 300 homes near Yosemite National Park remained in effect as firefighters battled a wildfire scorching about 300 acres in Central California.

Cal Fire reported Sunday morning that firefighters had contained about 65 percent of the blaze. The fire broke out Friday afternoon.

An additional 400 homes are being advised to evacuate. No damage has been reported. One minor injury was reported, but Cal Fire didn't provide details.

The area is about 15 miles southwest of Yosemite. A portion of Highway 49 that leads into the park has been closed.